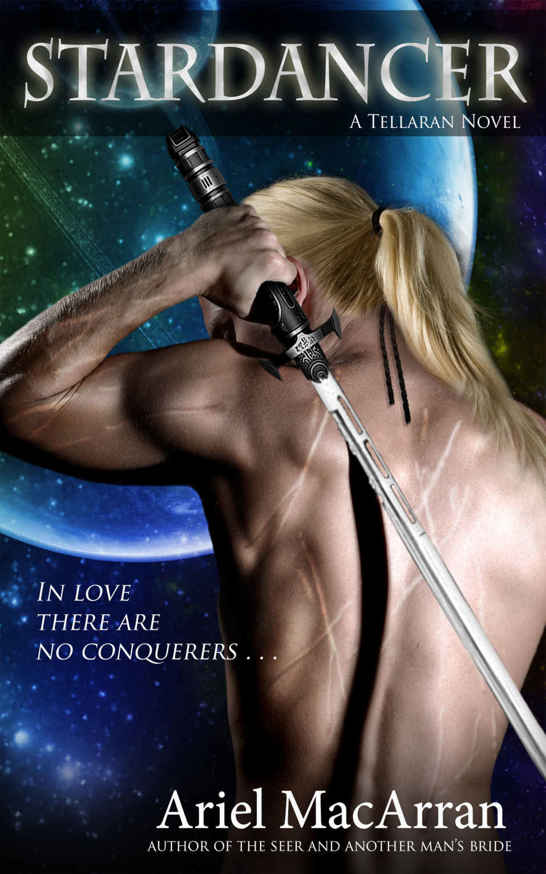 Stardancer
is a work of fiction. Names, characters, places, and incidents are products of the author’s imagination or are used fictitiously. Any resemblance to actual events, locales, or persons, living or dead, is entirely coincidental.

No part of this publication may be produced, stored or transmitted in any form or by any means without the prior written permission of the author.

This ebook is licensed for your personal enjoyment only. Please respect the author’s work.

Published by Here Be Dragons

Kinara had never killed anyone before. She was ready now.

She leaned forward in the command chair of the
Rapier
. Six days into Az-kye space, playing hide and seek with the savages’ patrols, and she was
more
than ready to find that ship and blow it to hell.

She rubbed her eyes and shifted in her seat against the ache in her shoulders. Viciously territorial, brutally violent, the Az-kye were as xenophobic as they were dangerous. This crew risked their lives and careers to cross into Az-kye space with her. She wasn’t about to put her fatigue above them.

“You’re pushing everyone too hard,” Tedah murmured. His warm brown hair fell in disheveled waves over his forehead, the skin under his green eyes deeply shadowed. Barely twenty-four, he was the only one of them who’d made it to an officer’s rank in the Fleet. “Cut the shifts shorter.  Let them rest.”

Kinara’s glance took in the tired cadets around them, manning posts they shouldn’t have seen for years. The
Rapier’s
bridge was small with duty stations for only eight, plus commander and first officer. An older design, her equipment was far from the latest but she still could pack a wallop in battle. Right now, with lights dimmed and life support kept at minimum to preserve power, it was as dark as a gambling den and stuffy too. The five others on the circular bridge were drooping in their seats.

She gave a short nod and tucked a lock of red hair behind her ear. “We’ll take one more pass of this sector. Then you can rotate this shift out.”

“You could use some rest too.”

“Kinna?” she interrupted with a short laugh. “I can’t remember the last time you called me that.”

“Kinara, we’ve been in their space almost a week looking for
one
ship. Gods know we’ve been lucky not to be detected yet but this can’t go on.” He touched her arm. “A commander thinks of her crew first, isn’t that what your father says?”

“I am thinking of them,” she said irritably. “They want justice, I’ll give it to them. The Az-kye are going to pay for what they did. We’ll leave
that
one
ship a burnt husk floating in space.”

“This won’t bring Kyndan back.”

“Kinna,” he said softly. “Do you really know what it takes for a man to die?”

She closed her eyes briefly. Kyndan, older than she by three years, standing so proudly in his scarlet uniform as their father handed over the orders for his first command, smartly snapping off his salute. The scorched and twisted wreckage that was once the
Reliant
—

“Go back?” Her nostrils flared and she turned to the viewscreen.  The display revealed endless empty space flanked by scrolling yellow figures showing distance, speed and proximity to astral bodies.  The Az-kye ship’s last known trajectory should bring them this way.  She just needed a little more time. “No.”

Tedah dropped his voice. “Do you know how much trouble these people are in? What kind of charges you’re looking at?  You’ll never be accepted to the academy now. I’ll be lucky if your father doesn’t strangle me for helping you.”

Kinara snorted. “My father? If we can find these murderous bastards, my father will probably
promote
you. He hates them almost as much as I do.”

“It doesn’t matter anyway,” Tedah said shortly. “Our power reserves are down by half. We need to start back or we won’t
make
it to Tellaran space.”

Kinara’s head came up. “Why are you doing this now? When we took the ship from the Fleet’s shipyard—”

“We stole the ship!”

“I know.” She bit her lip, studying him for a moment. “Do you remember the time my father took us all to Xeltan and I insisted I could race the sled by myself?”

His face softened. “You were, what, twelve? Probably the same day your father’s hair started to turn white. Poor man, watching his daughter racing out of control down the side of a mountain, knowing full well you’d die before giving up.”

“But you came after me. You jumped into my sled and saved me.”   Her fingers wrapped around his. “You were my hero that day, Tedah.”

He gently returned her squeeze.

Her grip tightened. “I need you to be my hero now.  We can’t give up!  Kyndan’s spirit is crying out for—”

Tedah yanked his hand away with a sound of disgust. “You don’t even see what you’ve turned into! We’ve thrown everything away—all of us fools.” He shook his head and stepped back. “I’m ending this now.  We’re going back to Tellaran space.”

“Helm,” Tedah said sharply. “Bring us about!” Nisara, seated at the pilot’s station, started at his order and turned to frown at them. “Set a course for Rusco.”

There was a ripple of surprise and consternation among the bridge crew.

Kinara shot to her feet. “Belay that order!  Lieutenant,” she snapped, her eyes narrowing at Tedah.  “We will consult privately. Off the bridge.
Now
.”

His eyes, usually so gentle, went hard. He was a heartbeat from full mutiny. She suddenly wondered how many of the exhausted cadets would follow him.

He was betraying her, betraying Kyndan. She couldn’t let him stop her now.

I have to have him escorted from the bridge
—
quick—before he forces them to choose.

Her hand twitched toward the sidearm at her hip. The blaster suddenly felt heavy in its holster; in another instant she would have its smooth grip in her hand. Kyndan had made sure she was a good shot.

To continue her hunt for that ship she was going to pay a high price but she wouldn’t miss.

Gods, what the hell am I doing?

Was I really going to pull a blaster on Tedah?

“Look!” Nisara cried, shocking her out of her thoughts. “It’s them! Kin I mean, Commander, we found them!”

Kinara was across the
Rapier
’s bridge in an instant. Her fingers flew over the controls.

It was an Az-kye warship all right, a big, lumbering, heavily armed monstrosity.

Tedah caught her arm before she could reach the command chair.   “No!  You’ve got to get us out of here!”

“Are you kidding? That’s the ship that destroyed the
Reliant
, Tedah! They killed my brother and his whole crew and you want to let them
go
?”

“With our power reserves this low we’re in no shape for a fight!  If you use our weapons on that monster we won’t have enough power to get home, Kinna.” Tedah shook his head. “I’m not going to stand by and watch you do this!”

“Then go below until it’s over!” Kinara hissed, yanking her arm away. “This won’t take long.”

“We need to go
now
, before they detect us. Do you understand what that Az-kye ship is capable of?”

“Soon
this
Az-kye ship won’t be capable of anything.” She settled into the command chair. “How long before they spot us?”

Nisara’s fingers flew over the controls. “A minute, maybe more.”

“Ready weapons. Target that juncture behind the bridge. We’re going to hit hard and pull back.”

The
Rapier
was built for this kind of fight. A Viper class ship, it was small, maneuverable and
fast
.

On the viewscreen, the image of the warship slowly grew larger.  Az-kye, in their own language, meant
Children of Heaven
.

Heaven’s children, indeed, Kinara thought with an inward sneer. She looked closer at the burn marks on the Az-kye ship, something—

Impatiently she pushed her hair out of her eyes.
It doesn’t matter. In a few minutes the whole ship will be scorched metal anyway.

Kinara licked her lips. They had one shot at this. She found a single weakness in the warship’s design but they had to hit it precisely, before they were spotted. Fire too soon and the blast wouldn’t be enough to pierce the warship’s hull. Too late and the full force of the Az-kye warship’s weapons would turn and blow them to pieces.

The bridge crew had gone quiet, as if they feared the Az-kye might somehow hear them approaching. She could hear Tedah’s breathing as he took up the first officer’s station at her side. The
Ty’pran
, not equipped with the Tellarans’ long-range scanners, would spot them any time now.

She glanced at Kern. “Weapons, wait for my command.” Kinara’s heart was pounding.
Hold on. Just another moment.
“Fire!  Hit them with everything we’ve got!”

Kern let loose with a barrage of firepower. Kinara blinked against the sudden glare in the viewscreen.

The weapons had scarcely discharged when she ordered the helm to pull back. Kinara smiled grimly. To the thickheaded Az-kye warriors the
Rapier
would appear to be almost in two places at once as they continued to circle and fire.

The ship rocked under her. Kinara had to grip the armrest to stay in the command chair.

“Did they hit us?” Tedah demanded.

Mari frowned at her screens. “I don’t think so. If they did, it sure didn’t cause any damage.”

Tedah bent over the display at his station, frowning. “We could have blown out some of the secondary relays but I’m not seeing any power fluctuations.”

“Get us some distance. Back and starboard now!” Kinara felt the ship respond. “Target those heavy cannons on their port side. Fire!”

The
Ty’pran
was swiftly being picked apart by the
Rapier’s
quick bursts. The
Ty’pran
was slow to respond, their weapons a hair too late. Under Nisara’s excellent piloting not one of the Az-kye’s weapons hit home as the
Rapier
continued their barrage.

Kinara caught her breath as in a sudden wave from stem to stern the
Ty’pran’s
power signature collapsed. Kinara ordered another salvo but there was no response from the enemy ship, no weapons fire, no course change. She frowned at the displays and discreetly wiped her wet palm on the dark blue trouser of her coveralls.

“Pull back out of their weapons’ range and hold position.” Kinara watched the
Ty’pran
drift for a few moments. “We did it.” She shook her head. “I didn’t think that . . .”  She raised her voice. “We did it!”

The bridge erupted with cheers but the heaviness in Kinara’s chest still pressed in on her.

Her stomach lurched.
Gods, what the inside of that ship must be like now.
“They got what they deserved.”

He made a sound of disgust. “Let’s pray we don’t.”

The rest of the crew was exuberant. Their faces were joyous, proud, as they hugged and clapped each other on the shoulder.

Suddenly she felt not the youngest but a thousand years older than any of them.

She addressed Nisara. “Helm, has there been any change in the enemy ship?”

Nisara shook her head. “No, Commander. They’re dead in space.”

Kinara took a deep breath.
Let’s finish this and get the hell out of here.
“All right. Helm, take us in. Ready weapons.”