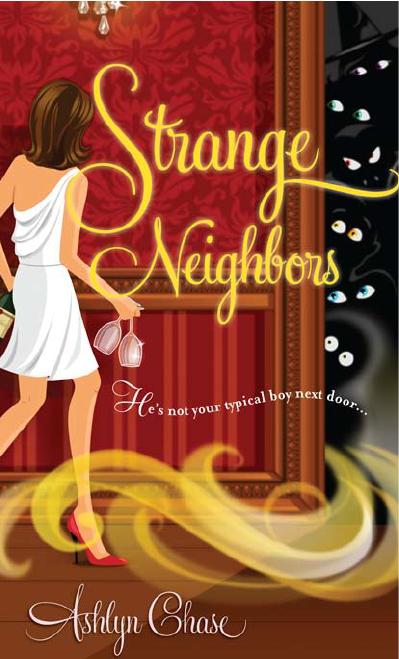 excerpt from The Warewolf Upstairs

Copyright © 2010 by Ashlyn Chase
Cover and internal design © 2010 by Sourcebooks, Inc.
Cover design by Kathleen Lynch
Cover illustration © Monika Roe
Sourcebooks and the colophon are registered trademarks of Sourcebooks, Inc.
All rights reserved. No part of this book may be reproduced in any form or by any electronic or mechanical means including information storage and retrieval systems—except in the case of brief quotations embodied in critical articles or reviews—without permission in writing from its publisher, Sourcebooks, Inc.
The characters and events portrayed in this book are fictitious or are used fictitiously. Any similarity to real persons, living or dead, is purely coincidental and not intended by the author.
Published by Sourcebooks Casablanca, an imprint of Sourcebooks,
Inc.
P.O. Box 4410, Naperville, Illinois 60567-4410
(630) 961-3900
FAX: (630) 961-2168
www.sourcebooks.com

To my husband for being the kind of guy I write about.
Yup, these great heroes are real, folks—and I'm so
lucky I found one!

I apologize in advance if Chad the ghost is a smartass. He feels he can get away with it, since no one can do much about him—it's not as if he can be evicted, or slapped in the face. Hey, if it had been up to me, I'd have chosen a polite nineteenth-century nanny to haunt the building instead of a sarcastic journalist from the sixties, but what can I say? Who would want to murder a sweet nanny?

"When you've haunted a building since the Beatles met Ed Sullivan, you see a lot of changes," Chad said to Harold, who haunted the building across the street.
The two ghosts floated between their buildings, high enough that the air currents from traffic below didn't affect them. Still, they swayed occasionally in the autumn breeze and had to compensate to remain face to face.
Harold contemplated the elegant old brownstone sadly. "I don't like to complain, mind you, but when your new owner ripped off the roof, did he have to replace it with a God-awful glass and steel penthouse? It's an eyesore here in historic Back Bay!"
"I miss the old owner. He was a crotchety, grumpy, eccentric recluse, but he didn't change anything."
"Change comes hard for most of us, Chad—living or dead—yet change is the nature of the world. You'd think we'd get used to it after all this time. I've been going with the flow… but enough is enough."
"I know what you mean, Harold. Change can kiss my ass."