THE CLASH OF CLAWS

THE CLASH OF CLAWS 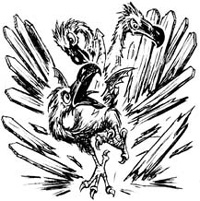 To Steve Cole, for being a genius writer (ha!),
inspiration, source of silly jokes and best friend.
These books couldn't have been
written without you.
PS You're not always right, though,
I still think geese
are
scary and pigs
can
snort threateningly!

One A Great Day Out

Four In the Maze

Seven Chased by a Bird

Nine Back to the Castle

a full moon shining down on a ruined castle. In the nearby village the church bells strike midnight. A hawk flies through the darkness into the castle. There is a loud crash of thunder. As the echo of the thunder fades, the evil goddess Juno appears in the doorway of the castle's only remaining tower. She is twice as tall as a normal woman. A
cloak of feathers swirls from her shoulders and her black eyes flash in anger.

With a creaking, grinding noise some of the stones on the inside of the tower wall opposite her begin to crumble away.

A man looks out of the hole in the wall. His face is lined with deep wrinkles. It is the superhero Hercules. âI imagine you must be talking about the boys, Finlay and Max?' he asks. There is a note of amusement in his deep voice as he looks at the enraged goddess.

âPathetic?' Hercules raises his eyebrows. âI hardly see how you can call
those two boys that, Juno. You have set them four tasks and they have completed each one, winning back four of my superpowers for me.'

âI still hold your three remaining superpowers,' Juno reminds him. âYou will not get
them
back!' 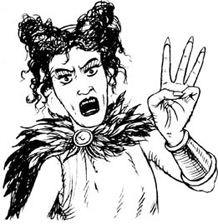 âI believe I will, Juno.' Hercules meets the goddess's gaze squarely. âThe deal you made with them still stands. There are only three remaining tasks of the seven you set them and every time that they succeed in completing another task, they win back another of my superpowers. I believe that soon all my powers will be returned to me and I shall break free from this prison.' He thumps the wall of the tower.

âNever!' Juno shrieks in rage. âIn the morning, the boys must slay the Man-Eating Birds of Stymphalia. Are you really trying to tell me that they will be able to do that?'

The goddess and the superhero stare at each other.

When Juno speaks her voice is low and dangerous. âThey will fail.' Before Hercules can speak she clicks her fingers. The stones instantly re-form, 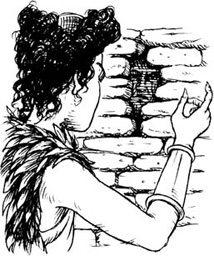 Juno looks at the wall where the hole has been. Her eyes glitter dangerously. âAnd this time they die, Hercules.'

She claps her hands. There is a crash of thunder and the next second, a hawk can be seen swooping out of the tower and flying away into the dark night.

A GREAT DAY OUT

Max Hayward stared at his mum over the breakfast table. Had he really just heard right? âWhat?' he exclaimed. âWe're going out for the day? But we can't be, Mum!'

âWhy not?' Mrs Hayward said in surprise. âIt'll be fun. We're going to Haslemere House.' She cleared away the cereal bowls. âI rang Finlay's mum after
you went to bed last night and he's coming too. You'll both have a great time. The website said there are ancient suits of armour inside the house as well as big gardens and a maze.'

âBut we were going to go to the castle, Mum,' Max protested.

âOh, Max, you've been at the castle every day this half-term,' Mrs Hayward said. âIsn't it getting a bit boring?'

Pictures of the last few days flashed into Max's mind â finding Hercules trapped in a tower there, meeting the goddess Juno, striking a deal with her to get Hercules' superpowers back, fighting a sabre-toothed lion, killing the Nine-Headed River Monster, cleaning a thousand years of 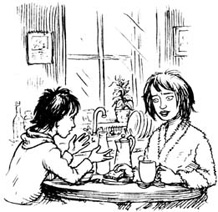 poo out of a stables and chasing a giant wild boarâ¦

No, he could
definitely
say it hadn't been boring! âNo, Mum, it's â¦ it's fun there,' he said.
If you like getting bitten, chased and attacked
, he thought to himself.

âWell, I'm sorry, Max, but the plans are all made,' his mum said firmly. âAuntie Carol's coming too, with your cousin, ZoÃ«, and ZoÃ«'s best friend, Michelle.' The phone started ringing and she broke off to answer it. âHello?' She listened for a moment. âIt's Fin, for you,' she said, handing Max the phone.

Max took the phone through to the lounge. âHi.'

âMax! What's going on?' Finlay shouted down the phone, almost shattering Max's eardrum. âI woke up this morning and my mum said I'm coming out for the day with you! What about the task? What about Hercules? We
can't
go out for the day!'

âI know!' Max replied desperately. âBut Mum says I've got to. Look, maybe you
can get out of it and get started on the task, then I can meet you at the castle later?'

He held his breath. He couldn't bear the thought of having to go round some boring house while Finlay was up at the castle using one of Hercules' superpowers and risking his life fighting a flock of man-eating birds, but at least that way there was a chance that they might get the next task done before sunset.

Max felt a rush of relief.

âAnyway,' Finlay went on, and Max could hear the grin in his voice. âYou don't think I'm going to fight a load of man-eating birds on my own, do you? No way!'

âWhat are we going to do, then?' Max demanded. He saw a bouncy ball on the table and picked it up, bouncing it against the tabletop as he tried to think of a way out.

âI know,' Finlay said. âWhy don't we go to this Haslemere House place and then when we get there, we say we feel sick, so your mum has to bring us home. By the time we're back here we can say we're OK again and then go up to the castle and do the task.'

âBut what about getting the superpower?' Max asked.

The boys had to get to the castle in the morning as the sun first shone on the gatehouse wall. This was where Juno had hidden Hercules' powers. For twenty minutes the superpowers
glowed out of the stones around the arched entrance. At the same time the stones in front of Hercules' face crumbled. It was Juno's way of adding to his misery. He could look at his powers but not reach them. However, the boys could and every day Max or Finlay chose one of these superpowers to help them with their task. But those twenty minutes were all they had before the powers disappeared. There were three superpowers left â incredible-agility, deadly accuracy and courage.