ZoÃ« went red. She glared at him. âAre you always so immature?' She swung back round. âIgnore them,' she told Michelle.

Max's mum and Auntie Carol got into the front.

âAll strapped in?' Auntie Carol asked cheerily. âLet's go, then. Haslemere House, here we come â it's going to be a lovely relaxing day out!'

Haslemere House was a large mansion set in huge gardens.

âWhere do you think the Man-Eating Birds are?' Finlay said in a low voice to Max as they got out of the Land Rover.

Mrs Hayward smiled at them. âLet's go and have a look round the house.'

âCan Fin and I go and look round the gardens instead, Mum?' Max asked.

But his mum shook her head. âNo,
come and see the house first. You can see the gardens later.'

Max felt a wave of frustration, but apart from just running off and getting into trouble there was nothing much he and Finlay could do. They reluctantly followed the others up the path towards the house entrance.

âLet's just get out as soon as we can,' Finlay hissed.

Max nodded. There were Man-Eating Birds out there. They had to find them â before anyone else did!

The house was very grand, filled with lots of pictures and old furniture and a few suits of armour standing in the corners. As Max's mum and his auntie walked around, looking at all the pictures, ZoÃ« and Michelle walked
behind them, texting friends and looking bored.

Every room seemed to lead to a new room. Max began to feel as if they were never going to get out of there. Frustration buzzed through him. They should be outside finding the Man-Eating Birds!

He pushed his hands in his pocket and felt the bouncy ball he'd been playing with earlier. He took it out and began bouncing it on the floor. As he looked round the room he saw ZoÃ« and Michelle approaching a suit of armour. One hand of the armour was closed around a small double-headed axe. The arm was raised, held in place with a string tied to the wall. An idea came to Max. If he could throw the
ball so that it landed on the string, the arm would jerk just as the girls walked past. Max grinned.

He nudged Finlay. âWatch this!' he said in a low voice. 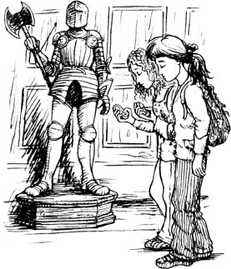 He waited until the girls were walking towards the suit of armour.

Max threw the ball as hard as he could at the string. It hit it exactly where he had intended. The arm jerked up with the axe. The girls gasped in alarm and jumped back.

Max began to grin but his smile soon froze. As the arm of the armour fell back again the weight of it caused the string to break. The axe fell away from the armour and landed with a clatter on the stone floor. Meanwhile the bouncy ball rebounded off the string, flying upwards like a jet-propelled missile.

âOh no!' gasped Fin, staring in horror as the ball hit the ceiling and came shooting back down, whacking into the
suit of armour's helmet. The visor fell down with a clang and made all the visitors turn round and stare in shock.

âMax!' Mrs Hayward exclaimed in horror. âWhatever do you think you are doing?'

Mrs Hayward looked extremely cross. âHonestly, Max! What were you thinking of? Playing with a ball in here of all places!'

A member of staff who worked at the house came hurrying into the room. âWhat's happened?' he asked.

The man grunted grumpily. âNow I'll have to take it down to the workshop to mend it.'

Mrs Hayward looked embarrassed. âI'm so sorry about it.' She turned to Max. âMaybe you and Finlay should go outside after all.'

Max could have punched the air in delight.
Result!

âCan we go outside too?' ZoÃ« asked eagerly.

âAll right,' Auntie Carol said. âThere's a maze outside and several aviaries full of birds.' She looked at the leaflet about the house that she had picked up at the entrance. âIt says here there's also baby lambs and foals in the stables, peacocks
in the gardens and an emu paddock beside the maze.'

âLet's go and see the foals,' Michelle said to ZoÃ«.

âSee you later, Mum!' Max exclaimed, not wanting to waste another second inside. 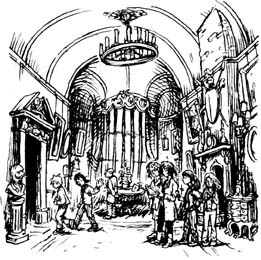 He and Finlay ran out through the house and down the steps.

âWe got out!' Finlay exclaimed, jumping down the last three steps in one go. âLet's find us some man-eating birds!' He looked at the gardens spread out before him. âWhich way should we go?'

âIt says aviaries that way!' Max said, pointing at a sign. âLet's try down there. That's where birds are kept.'

They set off down a gravel path that led between two tall hedges. It was quite a long path. At the very end of it there was a courtyard. On one side was a long, low building with the word
Workshop
on the door. On the other side were cages of tiny birds. They swooped around the cages, perching on branches and singing sweetly.

âIf they're the man-eating birds I'm
so
not frightened,' Finlay said.

Suddenly there was an ear-splitting shriek from just outside the courtyard.

Max's heart thudded in his chest. âWhat was that?' he whispered.

A second savage screech rent the air. It seemed to be coming from the other side of the courtyard where there was an archway and a sign above it that said:
This way to the Emu Paddock and Maze.

Nine giant birds with huge curved beaks were standing in a circle in the centre of the field. Each of them looked like a cross between a dinosaur and a bird. They had long scaly legs, dirty hooked claws on their feet, beady red eyes, small leathery wings and round bodies covered in jet-black feathers.

âWhat do you think they've done
with the real emus?' Finlay whispered nervously to Max.

Finlay suddenly noticed something. âThey've got something in there with them!' he said in alarm. âThey're surrounding it!'

He and Max hurried to the fence. A peacock was trapped in the centre of the circle of birds. It was crouching down, looking absolutely terrified. The monster birds shrieked triumphantly. One of the birds lifted its long curved beak high above the peacock's head. Opening its mouth it gave an evil screech and began to swing its beak downwards.

âNo!' Max yelled, unable to watch the peacock being killed.

The Man-Eating Birds swung round. Spotting the boys, they let out savage cries and, leaving the peacock, they began to stalk quickly across the paddock towards Max and Finlay. The peacock scrambled away with a relieved cry. The birds began to move faster. 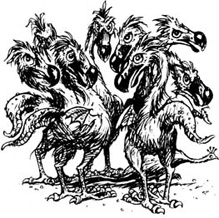 Their red eyes were fixed hungrily on the two boys.

Max and Finlay tore away from the paddock. Behind them the birds shrieked. Max could hear the pounding of their heavy taloned feet as they charged across the grass. Thank goodness their wings weren't big enough for them to be able to fly. He glanced round desperately. There was still the fence. Maybe that would stop themâ¦

Crash!
The leading bird smacked like a Sherman tank into the fence. The planks of wood cracked and broke. The other birds began slashing at the wood with their beaks, tearing off great chunks and chucking them out of the way as they ripped the fence apart. 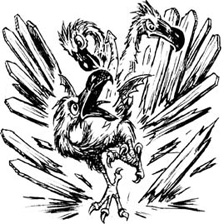