Tales from the Haunted Mansion Vol. 1: The Fearsome Foursome 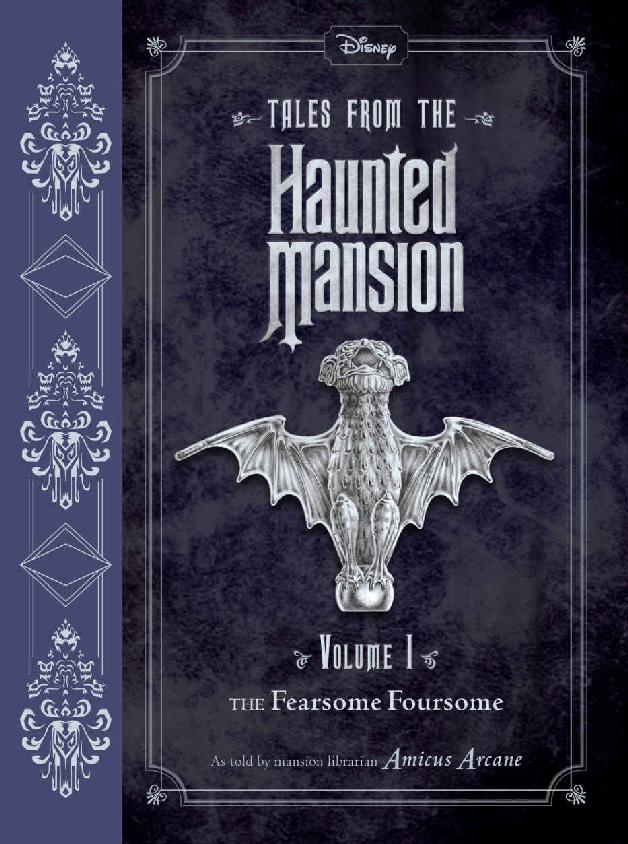 Copyright © 2016 Disney Enterprises, Inc. All rights reserved. Published by Disney Press, an imprint of Disney Book Group. No part of this book may be reproduced or transmitted in any form or by any means, electronic or mechanical, including photocopying, recording, or by any information storage and retrieval system, without written permission from the publisher. For information address Disney Press, 1101 Flower Street, Glendale, California 91201.

Welcome to Our Library

Chapter One: The Fearsome Foursome

For the dearly departed

For Sam and Carter

You heard me. Put this book down this instant.

Put it back where you found it!

For your own sake, I beseech you.

You’re not the type.

What type is
that
, you ask?

Welcome, foolish reader, to the illustrious library of…well, you know where you are. Allow me to introduce myself. I am your guide, Amicus Arcane, the soul librarian and entrusted keeper of 999 bone-chilling tales. Every spirit has a story, you see: a haunted history dying to get out…so it can follow you home. But heed this warning: we’re always on the lookout for one more tale.

We—if you haven’t guessed—are known in the parlance of the living as spirits, specters, poltergeists, apparitions. Or, if you prefer…

We are at our most spirited amongst the books, harboring a special affinity for those tales that burrow under the flesh, long after their authors have departed their corruptible mortal vessels. In this way, books themselves are rather like ghosts. Their very bindings contain the spirits of the dead. And that means this terrifying tome is haunted, which means this isn’t merely a book you’re holding, but an actual ghost. And that brings us to the subject at hand: the Fearsome Foursome.

Their little club, you see, was also interested in ghosts…and zombies and mummies and just about everything that goes bump in the night. Their founding body consisted of Willa, Tim, Noah, and Steve, four middle school students with a talent for storytelling and an appetite for the macabre. Their one goal: to frighten the wits out of each other with the scariest stories they could muster. A lofty goal, if I may say so myself. But this week, their meeting was abruptly canceled.

As it happens, their clubhouse was ravaged by a violent storm. Perhaps we had something to do with it. Who can say? My memory isn’t what it used to be since that coroner removed my brain.

The important thing to take with you is that the Fearsome Foursome had no place to tell their tales. So we provided them with a home. A bit off the beaten path, I will admit. But you can always take the shortcut through the graveyard.

It’s almost time for you to meet them. You see, I, too, have a tale or two or three or four that I’m dying to share. Once they heard them, their lives were never the same.

I
t all began at a lunch table,
where a good number of friendships are born. Willa was reading
Poe’s
Tales of Mystery and Suspense
, a dog-eared paperback containing classic stories written about a million years ago. The wording could be tricky, but once you got used to it, you’d be treated to the finest horror stories ever put to paper. More important, Willa was reading because she liked to read, not because it was assigned. And really, who reads anymore?
Besides you, that is.

Tim was passing the table, balancing a tray of what could generously be described as a macaroni item, when the cover caught his attention. It featured a black cat with a missing eyeball drooling something red. You know, one of those covers you can’t take your eyes off of—or, in the case of that particular black cat, eye, singular.

Tim made a beeline for Willa. Maybe it was her book. Or her hair, which could best be described as “seasonal.” Not the cut—the color. Those days it was blue, matching Willa’s eyes. Tim cleared his throat before opening with a compliment. “That is
so
sick.”

Willa glanced up over her shoulder. “Excuse me?”

“I have the same book,” he said, “only mine has a raven on it.” Tim slipped his hand into a New York Yankees backpack and pulled out his copy of
Poe’s Tales
.

Willa was momentarily impressed, until she spotted the word
abridged
under the title. “You got ripped off,” she said. “‘Abridged’ means they cut things out. Usually the good parts, like when they show
Beast Feast
on TV. You need to get the uncut version.” She went back to her Poe—not coincidentally, the uncut version.

But Tim hung around like a puppy, waiting for Willa to finish her page. Again, she glanced back. “May I help you?”

“My name’s Tim.” He extended his hand and Willa shook it, almost breaking it. She wasn’t a tomboy or anything. She was just stronger. And faster. But not smarter. On that score, Willa and Tim were in the same league.

Tim took the initiative, asking her if she knew his pals Noah and Steve. She’d heard of Steve, of course. Who hadn’t? Steve had a reputation for being a bad boy, which he wasn’t. But like it or not, looks went a long way in middle school. And Steve certainly looked the part.

Noah looked his part as well. He was a chubby redheaded geek she remembered from a recent science fair debacle: the banned
Dinosaurs versus Teachers
exhibit.

“They’re really into horror, too.”

She looked surprised. “Steve’s into horror?”

“You wouldn’t think so, I know. He’s one of the cool kids.” Willa shot him a look that suggested he was about to get decked. “Not that you’re
not
cool!” he quickly added, fearing for his life. “Steve-o got me into Poe.” He turned his paperback on its side, showing her Steve’s name written in marker. “Noah’s into Lovecraft. Ever hear of him?”

Tim was bubbling with excitement. Or maybe it was the macaroni item. Let’s just say
something
was bubbling in his belly. “We’re starting a club. For horror lovers only. Right now, it’s just the three of us. But there’s always room for one more.”

Willa instantly took to the idea. Horror lovers were in short supply those days. “You mean like a readers’ circle?”