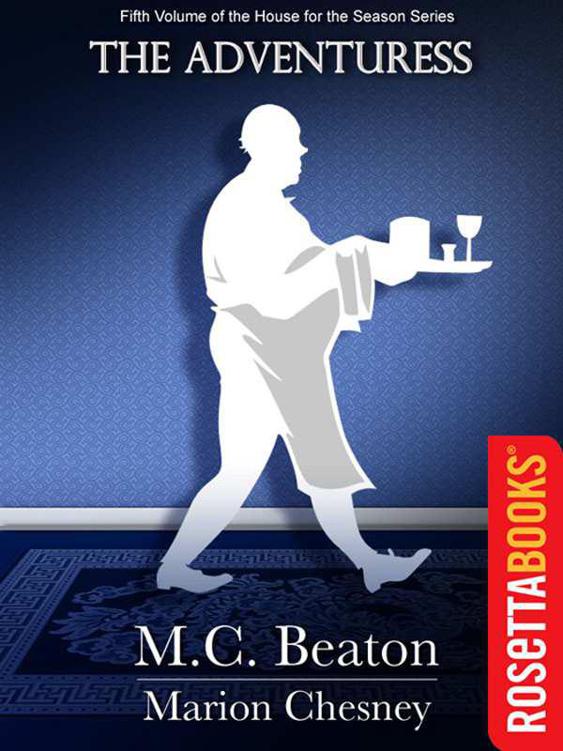 For David and Alice Lynne McKee
and their daughter, Kelly.

Oh, her lamps of a night! her rich goldsmiths, print-shops, toy-shops, mercers, hardware-men, pastry-cooks, St. Paul’s Churchyard, the Strand. Exeter Change, Charing Cross, with a man upon a black horse! These are thy gods, 0 London!

Although darkness still fell early across the neat streets and squares of London’s West End, although fog hung in smoky wreaths around the dingy globes of the parish lamps, and not one leaf was to be seen on the trees in Hyde Park, there was an undercurrent of excitement, a rustling, not of leaves, but of taffetas and silks being pinned and fitted. Delicately scented silk blossoms burst out everywhere. That artificial spring, that preparation for the London Season, was making the blood quicken.

Grimy windowsills were being scrubbed white again, shutters were being thrown open to air the rooms, and many members of society grimly prepared for the agonising ritual of their twice-yearly bath.

All the toys of the Season were being brought out of their boxes—the paints and powders and pomatums, the jewels and fans and enamelled snuff boxes. Who in their right mind would dream of wasting such sweet treasures on the rustic air? Huge cumbersome travelling carriages bearing their weight of aristocratic passengers rolled into Town, as the members of the bon ton, heartily weary of their country estates and of keeping up a façade of clean living to set an example to their tenants, figuratively loosened their stays and looked forward to an orgy of balls and routs and parties.

Débutantes knew they were being put on the market for sale, and very few saw anything odd or cruel about that. It was the way of the world. They could only pray that
he
would not turn out to be too old or too ugly. But, in the end, any man would do, for to return unwed after an expensive Season was showing ingratitude to God, who had seen fit to place these young ladies in such an exalted station.

After all, one could have been born to live underground, as one third of the population did, to sweat out one’s days as a servant in some basement or other.

But there were servants and servants. Some were lucky. They wintered in great palaces or mansions in the country and then travelled with their masters and mistresses to a well-appointed town house for the Season. They were well-fed and saved from the uncertainties of life.

But for the servants of a certain town house at 67 Clarges Street, every Season was a lottery. Their master, the Duke of Pelham, was barely aware of the existence of this piece of property, for he owned a large mansion in Grosvenor Square. The house in Clarges Street was, therefore, advertised before each Season as being to let. A good tenant meant tips for the servants and, with luck, an increase in their meagre wages, for the letting of the house was handled by the duke’s agent, Jonas Palmer, who paid the servants miserable wages, charged his master higher ones, and pocketed the difference.

Times were hard, jobs were scarce, and the small staff of Number 67 had to put up with the bullying and odious Palmer. The butler, Mr. John Rainbird, and the footman, Joseph, had been dismissed from previous jobs for indiscretions which Palmer threatened to broadcast to the world should either show signs of escaping to another master. The rest were tied to the house out of loyalty to their butler, and because it would be nigh impossible to find other work without references, and Palmer would certainly not give any of them a good reference should they wish to leave.

The house had been damned as unlucky, not only because the present duke’s father had hanged himself there, but due to a subsequent series of dramatic happenings. It was a superstitious age. Each year the servants could only hope that someone outside the circle of London gossip, who had not heard of the bad luck of the house, might be tempted to take it. It was offered at a low rent, only eighty pounds, a fortune to some, but little to the aristocracy, who often paid over one thousand pounds for more inferior accommodation.

But the uncertainty, the hard life, and the long boredom of the winters, which had been unusually severe of late, had bound the servants into a tight-knit family. Apart from Rainbird, the butler, and Joseph, the footman, there was a housekeeper, Mrs. Middleton; a cook, Angus MacGregor; a housemaid, Alice; a chambermaid, Jenny; a scullery maid, Lizzie; and a little pot boy called Dave.

They had spent a cheese-paring sort of winter, not because they did not have any money, for they had managed to accumulate quite a sum from the previous tenants, but because they all planned to club together and buy a pub. That way, they could escape from Palmer, escape from the servant class, and be free to marry—for servants were not allowed to marry.

They had all been introduced to the joys of education by a previous tenant and had kept up their studies during the winter. But although their increased knowledge had broadened their interests and raised their conversation above mere gossip, it had also caused a certain amount of restlessness. Not one of them was content with the role of servant. The dream of the pub was so near, and yet, at the same time, so very far away. Rainbird had said they would need another two good Seasons before they could make their escape.

On one chilly day when the morning’s frost still glittered unmelted on the street outside, the staff gathered round the table in the servants’ hall for their breakfast and to talk again about the hideous disappointment of the day before.

For Jonas Palmer had turned up with a very fine gentleman, none other than the Earl of Fleetwood. The earl was very grand, very rich, and very autocratic. Palmer had not forewarned the servants of the visit, and so the house was cold and the furniture still shrouded under holland covers.

The earl had marched from one room to the other. It did not take him very long. It was a tall, thin house, with two rooms to a floor. The ground consisted of front and back parlours, the first of a dining-room on the front and a bedroom at the back, the second of two bedrooms. The attics at the top housed the servants, with the exception of Mrs. Middleton, who slept in her parlour off the backstairs; Lizzie, the scullery maid, who camped out in the scullery; and Dave, the pot boy, who bedded down under the kitchen table.

Alice, the beautiful and languorous housemaid, said she thought the earl was ever so handsome, but Mrs. Middleton was of the opinion that he looked too clever to be handsome. The earl had thick black hair, a thin face with high cheek-bones that gave him an almost Slav appearance, as did his bright blue eyes, which had a black rim round the pupil and a slight slant at the outside edge. He was tall and well-built and immaculately armoured against the world in Weston’s tailoring, sparkling Hessian boots, and one of the most intricately tied cravats the servants had ever seen. But they had all been well-disposed towards him until, after his tour of inspection, he had said with a lazy drawl, “Too poky by half, Palmer. Not at all suitable. Cold as charity in here. I shall need to find somewhere else.” And without even a nod towards the listening servants, he had taken himself off.

Now disappointment united them in damning him. Even Dave, who had been considered of too low an order to be present (and because Palmer was unaware of the boy’s existence in the household, Rainbird having rescued Dave from a miserable career as a chimney-sweep’s boy), had managed to catch a glimpse of the earl as he had left by peeping through the railings at the top of the area steps, and declared him to be “as cold-looking as last week’s cod.”

“We don’t want his sort here,” said Joseph, the effeminate footman. “Eh was speaking to Luke and he told me all sorts of things.” Luke was first footman at Lord Charteris’ town house next door.

“Lahk he was merried and he beat his poor wife to death,” said Joseph.

“My stars!” cried Mrs. Middleton, her faded timid face reddening with shock. “When was that?”

“Eight years ago,” said Joseph, his genteel accents slipping as he lifted The Moocher, the kitchen cat, down from his lap, leaned his elbows on the table, and prepared to gossip for all he was worth.

“He had only been married a short bit,” said Joseph, “when they was down at their place in Sussex. His lady had gone out walking in the wood near the house on the estate wiff ’er little dog. The servants ’eard terrible cries and smashing sounds coming from the wood, and ’er dog, he run home all on ’is lone. They rushed interrawood and found ’er, all blood and battered, she were. ’Orrible, it was.”

“Well, how did they come to think his lordship had done it?” asked Rainbird cynically.

“Afore she died,” said Joseph, “she turned ’er beautiful blue eyes up to the heavens and murmured ‘Peter.’ That’s the earl’s Christian name, swelp me if it ain’t.”

“Then why wasn’t the earl put in the Tower?” asked Lizzie.

Joseph looked at her haughtily. He still expected Lizzie to hang on his every word, although the girl’s uncritical devotion to him seemed to have somewhat faded of late. He rummaged around his vocal chords for his genteel accent.

“Because,” he said haughtily, “he’s a member of the aristocracy,
thet’s
why. They cen get away with anything they lahk. Besides, Luke says as how the earl was out hunting somewhere else.”

“So he couldn’t have done it,” snapped Jenny, the chambermaid, who had little time for Luke.

“But it was a derk day and no one had seen him on the hunting field for some time,” said Joseph triumphantly. “They hadn’t enough evidence to heng him, but everyone knows he did it, says Luke.”

Rainbird glanced at Mrs. Middleton’s stricken face. The tale of the murder had made her look quite faint.

“I have never known Luke tell anything other than a pack of lies,” he said roundly. There came a growling, roaring noise that shook the house.

“No,” said Rainbird. “Coal. It’s so long since we’ve heard the sound of any being delivered, you’ve forgotten what the noise is like. Joseph, go up to the pavement and make sure the coal-hole cover is back on. Palmer wants us to light fires in every room, so at least we’ll be warm at his expense.”

Joseph stalked off, his back stiff with outrage. He obviously thought checking coal-hole covers was beneath him.

Lizzie rested her pointed chin on her hands and looked at the butler with wide pansy-brown eyes. “You know, Mr. Rainbird,” she said, “I thought the earl was a fine-looking gentleman. I took a dislike to him because of disappointment and all, but I can’t believe Luke’s story. I thought Lord Fleetwood looked
kind.”

“But he was so contemptuous,” said Jenny. “And he never even looked at us. It was as if we didn’t exist.”