Read The Bane Chronicles 1: What Really Happened in Peru Online

The Bane Chronicles 1: What Really Happened in Peru 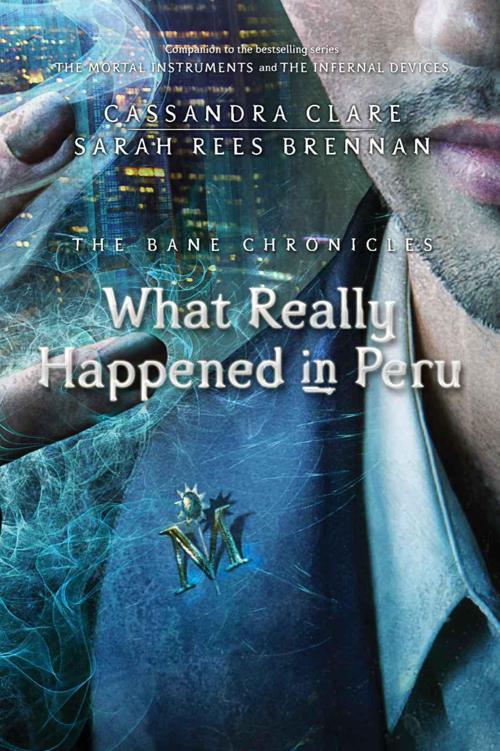 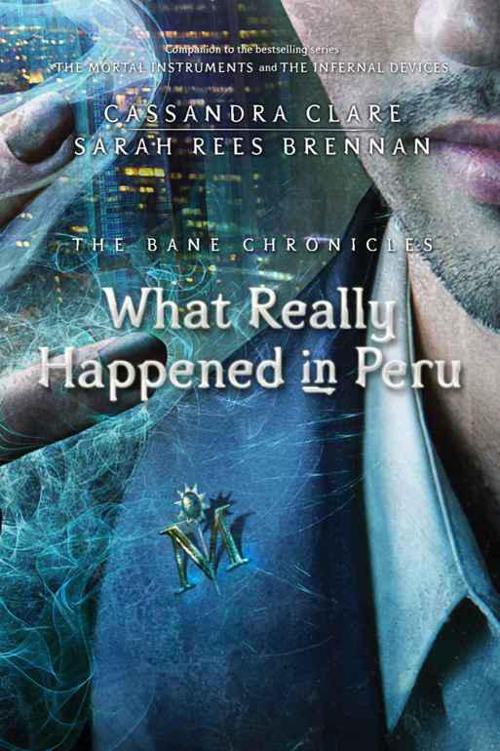 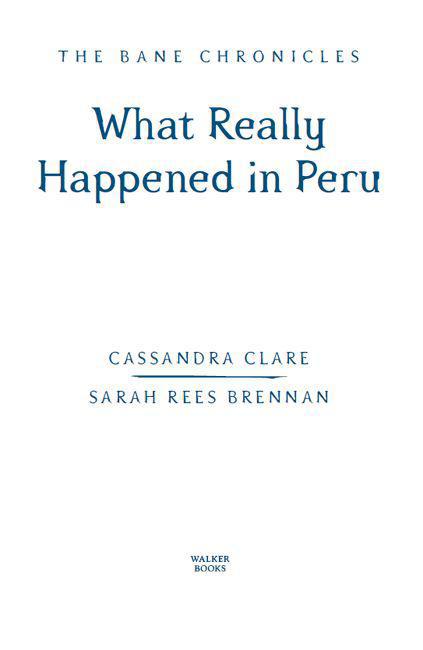 Find out about other great books at

Get the inside story. Meet authors, get exclusives, win prizes.

It was a sad moment in Magnus Bane’s life when he was banned from Peru by the High Council of Peruvian warlocks. It was not just because the posters with a picture of him that were passed around Downworld in Peru were so wildly unflattering. It was because Peru was one of his favorite places. He had had many adventures there, and had many wonderful memories, starting with the time in 1791 when he had invited Ragnor Fell to join him for a festive sightseeing escape in Lima.

Magnus awoke in his roadside inn just outside Lima, and once he had arrayed himself in an embroidered waistcoat, breeches, and shining buckled shoes, he went in search of breakfast. Instead he found his hostess, a plump woman whose long hair was covered with a black mantilla, in a deep, troubled conference with one of the serving girls about a recent arrival to the inn.

“I think it’s a sea monster,” he heard his hostess whisper. “Or a merman. Can they survive on land?”

“Good morning, ladies,” Magnus called out. “Sounds like my guest has arrived.”

Both women blinked twice. Magnus put the first blink down to his vivid attire, and the second, slower blink down to what he had just said. He gave them both a cheery wave and wandered out through wide wooden doors and across the courtyard into the common room, where he found his fellow warlock Ragnor Fell skulking in the back of the room with a mug of
chicha de molle
.

“Tell them I’ll have the same,” said Ragnor. “I achieved this drink only through some very determined pointing.”

Magnus did, and when he returned his gaze to Ragnor, he saw that his old friend was looking his usual self: hideously dressed, deeply gloomy, and deeply green of skin. Magnus often gave thanks that his own warlock’s mark was not so obvious. It was sometimes inconvenient to have the gold-green, slit-pupilled eyes of a cat, but this was usually easily hidden with a small glamour, and if not, well, there were quite a few ladies—and men—who didn’t find it a drawback.

“You said that you wanted me to join you on travels that would be a ceaseless round of debauchery,” Ragnor told him.

Magnus beamed. “I did!” He paused. “Forgive me. I do not see the connection.”

“I have found I have better luck with the ladies in my natural state,” Ragnor told him. “Ladies enjoy a bit of variety. There was a woman in the court of Louis the Sun King who said none could compare to her ‘dear little cabbage.’ I hear it’s become quite a popular term of endearment in France. All thanks to me.”

He spoke in the same glum tones as usual. When the six drinks arrived, Magnus seized on them.

“I’ll be needing all of these. Please bring more for my friend.”

“There was also a woman who referred to me as her sweet peapod of love,” Ragnor continued.

Magnus took a deep restorative swallow, looked at the sunshine outside and the drinks before him, and felt better about the entire situation. “Congratulations. And welcome to Lima, the City of Kings, my sweet peapod.”

After breakfast, which was five drinks for Ragnor and seventeen for Magnus, Magnus took Ragnor on a tour of Lima, from the golden, curled, and carved façade of the archbishop’s palace to the brightly colored buildings across the plaza, with their practically mandatory elaborate balconies, where the Spanish had once executed criminals.

“I thought it would be nice to start in the capital. Besides, I’ve been here before,” Magnus said. “About fifty years ago. I had a lovely time, aside from the earthquake that almost swallowed the city.”

“Did you have something to do with that earthquake?”

“Ragnor,” Magnus reproached his friend. “You cannot blame me for every little natural disaster that happens!”

“You didn’t answer the question,” Ragnor said, and sighed. “I am relying on you to be . . . more reliable and less like you than you usually are,” he warned as they walked. “I don’t speak the language.”

Magnus was perfectly aware he was a stranger everywhere he went, and he took care to learn all the languages so he could go anywhere he chose. Spanish had been the first language that he had learned to speak, after his native language. That was the one tongue he did not speak often. It reminded him of his mother, and his stepfather—reminded him of the love and the prayer and despair of his childhood. The words of his homeland rested a little too heavily on his tongue, as if he had to mean them, had to be serious, when he spoke.

(There were other languages—Purgatic and Gehennic and Tartarian—that he had learned so that he could communicate with those from the demon realms, languages he was forced to use often in his line of work. But those reminded him of his blood father, and those memories were even worse.)

Sincerity and gravity, in Magnus’s opinion, were highly overrated, as was being forced to relive unpleasant memories. He would much rather be amused and amusing.

“I don’t speak any of the things that you just said,” Ragnor told him. “Although, I must speak Prattling Fool, since I can understand you.”

“That is hurtful and unnecessary,” Magnus observed. “But of course, you can trust me completely.”

“Just don’t leave me here without guidance. You have to swear, Bane.”

Magnus raised his eyebrows. “I give you my word of honor!”

“I will find you,” Ragnor told him. “I will find whatever chest of absurd clothes you have. And I will bring a llama into the place where you sleep and make sure that it urinates on everything you possess.”

“There is no need to get nasty about this,” Magnus said. “Don’t worry. I can teach you every word that you need to know right now. One of them is ‘
fiesta
.’”

Ragnor scowled. “What does that mean?”

Magnus raised his eyebrows. “It means ‘party.’ Another important word is ‘
juerga
.’”

“What does that word mean?”

Magnus could not help the sly grin that spread across his face. “I would apologize,” he said. “Except that I feel no regret at all.”

“Try to be a little sensible,” Ragnor suggested.

“You’re always on holiday,” Ragnor pointed out. “You’ve been on holiday for thirty years!”

It was true. Magnus had not been settled anywhere since his lover died—not his first lover, but the first one who had lived by his side and died in his arms. Magnus had thought of her often enough that the mention of her did not hurt him, her remembered face like the distant familiar beauty of stars, not to be touched but to shine in front of his eyes at night.

He had no idea why Ragnor sighed again.

Ragnor’s suspicious nature continued to make Magnus very sad and disappointed in him as a person, such as when they visited Lake Yarinacocha and Ragnor’s eyes narrowed as he demanded: “Are those dolphins pink?”

“They were pink when I got here!” Magnus exclaimed indignantly. He paused and considered. “I am almost certain.”

Brotherhood and Others by Mark Sullivan
The Spymaster's Daughter by Jeane Westin
Whiskey Lullaby by Martens, Dawn, Minton, Emily
King Arthur and Her Knights: Enthroned #1, Enchanted #2, Embittered #3 by K.M. Shea
Dating the Rebel Tycoon by Ally Blake
Descending Surfacing by Catherine Chisnall
Thunderstrike in Syria by Nick Carter
Mundahlia (The Mundahlian Era, #1) by RJ Gonzales
Tastes Like Fear (D.I. Marnie Rome 3) by Sarah Hilary
For The Love Of Sir by Laylah Roberts
Our partner