Read The Case for Mars Online

The Case for Mars 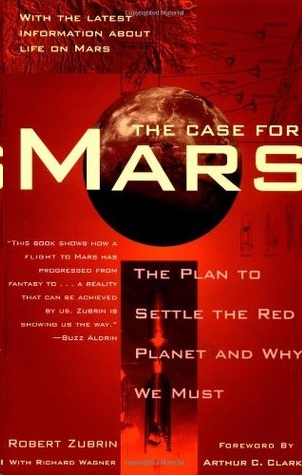 To Maggie, Eliot, Sarah, and Rachel:
my family, friends, and hope for the future.

Copyright © 1996 by Robert Zubrin
All rights reserved, including the right of reproduction in whole or in part in any form.

TOUCHSTONE
and colophon are trademarks of Simon & Schuster Inc.

The case for Mars: the plan to settle the red planet and why we must / Robert M.

I fear no barrier of crystal or of glass;

I cleave the heavens and soar to the infinite.

And while I rise from my own globe to others

And penetrate even further through the eternal field,

That which others saw from afar, I leave far behind me.

—Giordano Bruno
“On the Infinite Universe and Worlds,” 1584

2 From Kepler to the Space Age

5 Killing the Dragons, Avoiding the Sirens

7 Building the Base on Mars

8 The Colonization of Mars

10 The View from Earth

Epilogue: The Significance of the Martian Frontier

The planet Mars is where the action will be in the next century. It is the only world in the solar system on which there is a strong probability of finding Life Past, and perhaps even Life Present. Also, we can reach it—and survive on it—with technologies which are available today, or which we can acquire in the very near future.

Robert Zubrin’s book—which is often very amusing and contains asides which will not endear him to NASA—is the most comprehensive account of the past and future of Mars that I have ever encountered. It explains why we should go there, how we may go there—and, perhaps most important of all, how we may “live on the land” when we get there.

Personally, I am delighted to think that—if Dr. Zubrin’s persuasive arguments are accepted—the first expedition to Mars may leave shortly before my ninetieth birthday. Meanwhile, if all goes well, the Russian Mars Lander will be leaving just before my seventy-eighth, carrying a message I have videod for the colonists of the next century:

My name is Arthur Clarke, and I am speaking to you from the island of Sri Lanka, once known as Ceylon, in the Indian Ocean, Planet Earth. It is early spring in the year 1993, but this message is intended for the future. I am addressing men and women—perhaps some of you already born—who will listen to these words when they are living on Mars.

As we approach the new millennium, there is great interest in the et which may be the first real home for mankind beyond the mother world. During my lifetime, I have been lucky enough to see our knowledge of Mars advance from almost complete ignorance—worse than that, misleading fantasy—to a real understanding of its geography and climate. Certainly we are still very ignorant in many areas, and lack knowledge which you take for granted. But now we have accurate maps of your wonderful world, and can imagine how it might be modified—terraformed—to make it nearer to the heart’s desire. Perhaps you are already engaged upon that centuries-long process.

There is a link between Mars and my present home, which I used in what will probably be my last novel,
The Hammer of God.
At the beginning of this century, an amateur astronomer named Percy Molesworth was living here in Ceylon. He spent much time observing Mars, and now there is a huge crater, 175 kilometers wide, named after him in your southern hemisphere. In my book I’ve imagined how a New Martian astronomer might one day look back at his ancestral world, to try and see the little island from which Molesworth—and I—often gazed up at your planet.

There was a time, soon after the first landing on the Moon in 1969, when we were optimistic enough to imagine that we might have reached Mars by the 1990s. In another of my stories, I described a survivor of the first ill-fated expedition, watching the Earth in transit across the face of the Sun on May 11—1984! Well, there was no one on Mars then to watch that event—but it will happen again on November 10, 2084. By that time I hope that many eyes will be looking back towards the Earth as it slowly crosses the solar disk, looking like a tiny, perfectly circular sunspot. And I’ve suggested that we should signal to you then with powerful lasers, so that you will see a star beaming a message to you from the very face of the sun.

I too salute to you across the gulfs of space—as I send my greetings and good wishes from the closing decade of the century in which mankind first became a space-faring species, and set forth on a journey that can never end, so long as the universe endures.

Doubtless in many of its details, Dr. Zubrin’s book—like my own exercise in terraforming Mars,
The Snows of Olympus
—will be bypassed by future advances in technology. However, it demonstrates beyond all reasonable doubt that the first self-sustaining human colony beyond Mother Earth lies within the grasp of our children.

Will they seize the opportunity? It is almost fifty years since I ended my first book,
Interplanetary Flight
, with these words:

The choice, as Wells once said, is the Universe—or nothing. . . . The challenge of the great spaces between the worlds is a stupendous one; but if we fail to meet it, the story of our race will be drawing to its close. Humanity will have turned its back upon the still untrodden heights and will be descending again the long slope that stretches, across a thousand million years of time, down to the shores of the primeval sea.

We choose to go to the Moon! We choose to go to the Moon in this decade and do the other things, not because they are easy but because they are hard, because that goal will serve to organize and measure he best of our energies and skills, because that challenge is one that we are willing to accept, one we are unwilling to postpone, and one which we intend to win. . . . This is in some measures an act of faith and vision, for we do not know what benefits await us. . . . But space is there and we are going to climb it.

The time has come for America to set itself a bold new goal in space. The recent celebrations of the twenty-fifth anniversary of the Apollo Moon landings have reminded us of what we as nation once accomplished, and by so doing have put the question to us: Are we still a nation of pioneers? Do we choose to make the efforts required to continue as the vanguard of human progress, a people of the future, or will we allow ourselves to be a people of the past, one whose accomplishments are celebrated only in museums? When the fiftieth anniversary arrives, will our posterity honor it as the touchstone of a frontier pushing tradition that they continue? Or will they look upon it much as a seventh century Roman may have once gazed upon the aqueducts and other magnificent feats of classical architecture still visible among the ruins, saying to himself in amazement, “We once built that?”

There can be no progress without a goal. The American space program, begun so brilliantly with Apollo and its associated programs, has spent most of the subsequent twenty years floundering without direction. We need a central overriding purpose to drive our space program forward. At this point in history, that focus can only be the human exploration and settlement of Mars.

Mars is the fourth planet from the Sun, about 50 percent farther out than Earth, making it a colder place than our home planet. While daytime temperatures on Mars sometimes get up to 17° centigrade (about 63° Fahrenheit), at night the thermometer drops to -90°C (-130°F). Because the average temperature on Mars is below the freezing point, there is no liquid water today on its surface. But this was not always the case. Photographs of dry riverbeds on the Martian surface taken from orbital spacecraft show that in its distant past Mars was much warmer and wetter than it is today. For this reason, Mars is the most important target for the search for extraterrestrial life, past or present, in our solar system. The Martian day is very similar to that of Earth—24 hours and 37 minutes—and the planet rotates on an axis with a 24° tilt virtually equal to that of Earth, and thus has four seasons of similar relative severity to our own. Because the Martian year is 669 Martian days (or 686 Earth days), however, each of these seasons is nearly twice as long as those on Earth. Mars is a big place; although its diameter is only half that of Earth, the fact that it is not covered with oceans gives the Red Planet a solid surface area equal to that of all of Earth’s continents combined. At its closest, Mars comes within 60 million kilometers of our world; at its farthest, about 400 million kilometers. Using present day space propulsion systems, a one-way voyage to Mars would take about six months—much longer than the three-day trip required by the Apollo missions to reach the Moon, but hardly beyond human experience. In the nineteenth century immigrants from Europe frequently took an equal time to sail to Australia. And, as we’ll see, the technology required for such a journey is well within our reach.

The Touch of Innocents by Michael Dobbs
From London Far by Michael Innes
Tell Me Something Real by Calla Devlin
Karibu Heat (Sequel to Kabana Heat) by Ladley, Titania
WILD (Naked, Book 3) by Favor, Kelly
The Newcomer (Thunder Point) by Robyn Carr
Like No Other by Una LaMarche
The Hunt for Summer (NSC Industries) by Sidebottom, D H
In the Night of Time by Antonio Munoz Molina
Cold Harbour by Jack-Higgins
Our partner