Read The Door Between Online 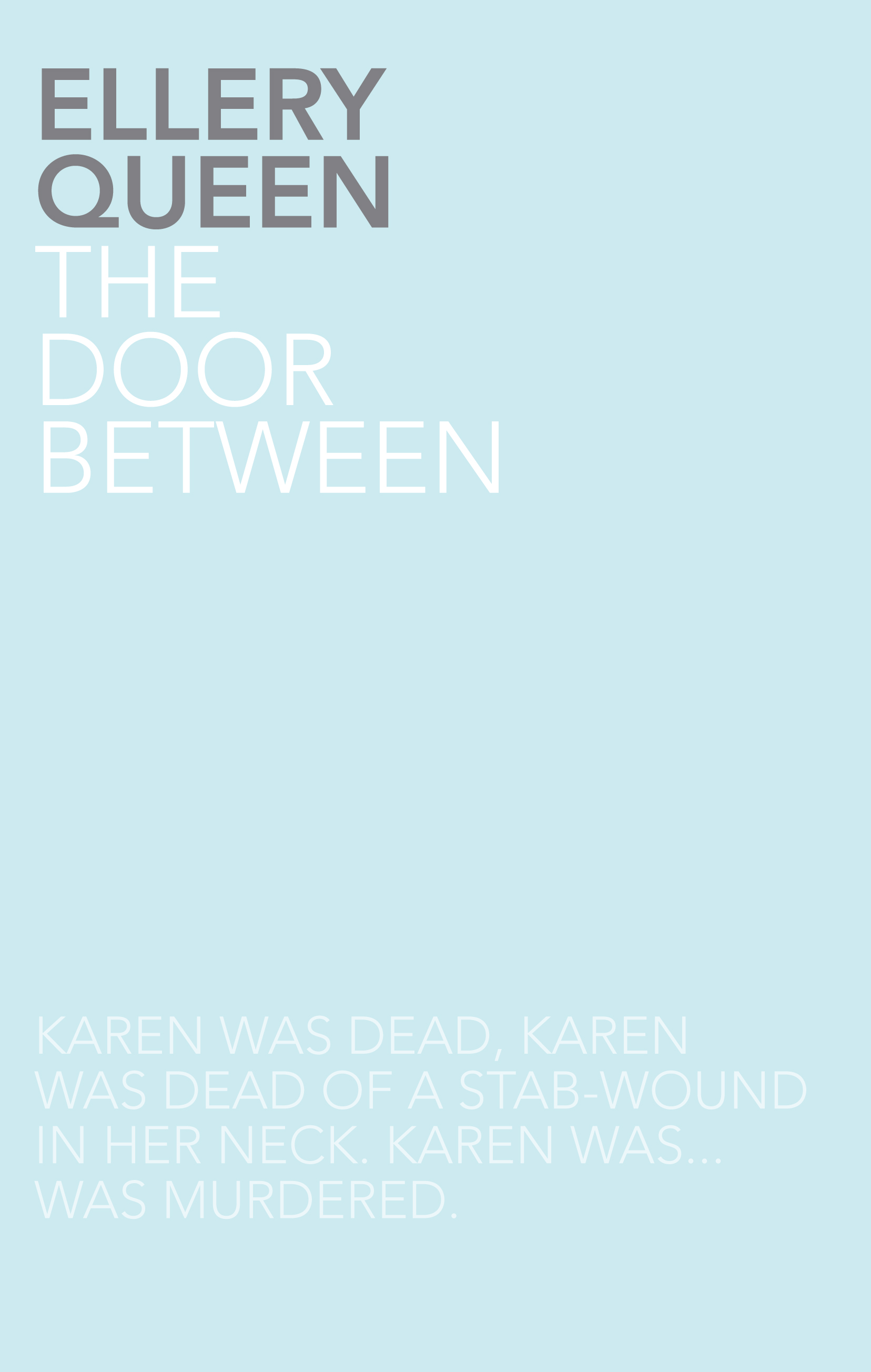 Ellery Queen was both a famous fictional detective and the pen name of two cousins born in Brooklyn in 1905. Created by Manfred B. Lee and Frederic Dannay as an entry in a mystery-writing contest, Ellery Queen is regarded by many as the definitive American whodunit celebrity. When their first novel,
The Roman Hat Mystery
(1929), became an immediate success, the cousins gave up their business careers and took to writing dozens of novels, hundreds of radio scripts and countless short stories about the gentleman detective and writer who shared an apartment on West 87th Street with his father, Inspector Queen of the NYPD. Dannay was said to have largely produced detailed outlines of the plots, clues and characters while Lee did most of the writing. As the success of Ellery Queen grew, the character’s legacy continued through radio, television and film. In 1941, the cousins founded
Ellery Queen’s Mystery Magazine
. Edited by Queen for more than forty years, the periodical is still considered one of the most influential crime fiction magazines in American history. Additionally, Queen edited a number of collections and anthologies, and his critical writings are the major works on the detective short story. Under their collective pseudonym, the cousins were given several Edgar awards by the Mystery Writers of America, including the 1960 Grand Master Award. Their novels are examples of the classic ‘fair play’ whodunit mystery of the Golden Age, where plot is always paramount. Manfred B. Lee, born Manford Lepofsky, died in 1971. Frederic Dannay, born Daniel Nathan, died in 1982.

This edition published 2011 by

E
VA
M
AC
C
LURE
, his daughter, who found that death, persecution, and despair could end in happiness.

T
ERRY
R
ING
, a private detective who kept so many secrets he finally shouted his own to the world.

G
UILFOYLE
, who had a date with a corpse.

I
NSPECTOR
Q
UEEN
, a mild-mannered father, driven to snuff-sniffing fury by his son’s antics.

D
R.
P
ROUTY
, a sardonic police medico whose reports kept the case from getting too easy.

When Karen Leith won the major American prize in literature her grateful publisher surprised everyone, including himself, by successfully wheedling his
prima donna
into a public appearance.

Even more surprising was Miss Leith’s permission to stage the insubstantial pageant in her own Japanese garden behind the prim house in Washington Square.

A great many important people came, studding the unimportant ones like raisins in a cake; and everybody was happy, none more so than Miss Leith’s publisher, who had never dreamed his most difficult piece of property would consent to put herself on exhibition – and in her own garden, too!

But winning the literary award seemed to do something to the small, shy, still-pretty woman who had come quietly out of Japan in 1927 and sequestered herself behind the opaque walls of the house in Washington Square, from whose sanctuary she sent forth incredibly enameled and beautiful novels; and the handful who had met her before swore they had never seen her so excited and friendly.

But most of the crowd had never seen Karen Leith at all, which made her party more of a début than a triumph. For a woman reputed to be as scary as a bird, she stood the ordeal well. In fact, she seemed to challenge attention, for she had draped her frail figure in a gorgeous Japanese kimono and brushed her blue-black hair back in the loose sleek bulging Nipponese style. Even the more critical gentry present were disarmed, however; Karen carried herself so gracefully in the quaint costume that they knew what seemed a challenge was nothing of the sort and that she was simply more at ease in Japanese garb than she would have been in a Fifth Avenue modiste’s gown. Ivory and jade pins lay in her hair like crown jewels; and indeed Karen was royalty that evening, receiving her guests with that bloodless excitement under disciplined calm of a queen at her coronation.

The celebrated author of
Eight-Cloud Rising
was a tiny creature of such feathery structure that, as one poetic gentleman remarked, a delicate wind would have rocked her and a gale swept her bodily away. Her cheeks were pale hollows under the curious and careful cosmetics. In fact, she looked ill; and there was a floating quality in her gestures that suggested the fatigue of neurasthenia.

Only her eyes were vivacious: they were gray and Caucasian, aglitter and yet a little masked in their violet settings, as if they had somewhere in her rather mysterious past learned to shrink from blows. The ladies all agreed with unusual magnanimity that she possessed a rather fantastic prettiness, more on the ethereal side and quite ageless; almost like a ceramic of the East or one of her strange ceramic novels.

Karen Leith was what she was, everyone agreed; and what she was nobody knew, for she never went out and she kept to her house and garden like a nun. And since the house was inaccessible and the garden wall high, biographical details were maddeningly scanty: she was the daughter of an obscure American expatriate who until his death had taught comparative literature at the Imperial University in Tokyo, and she had spent most of her life in Japan. And that was nearly all.

Karen was holding court in a small pavilion at the center of the alien garden, preparing tea according to a Japanese ceremony she called
Cha no yu
. She sing-songed the peculiar sounds with such ease it seemed almost as if English were an acquired language rather than her heritage. Her girlish hands were busy with a whisk stirring powdered green tea in a rather rudely fashioned Korean bowl of thick, aged pottery. A very ancient Oriental woman dressed in Japanese costume stood silently behind her, like a protecting deity.

“Her name is Kinumé,” explained Karen in answer to a question concerning the old woman. “The dearest, gentlest soul. She’s been with me for – oh, centuries.” And for an instant Karen’s pretty, exhausted face darkened unaccountably.

“She looks Japanese and yet she doesn’t,” said one of the group in the pavilion. “Isn’t she tiny!”

Karen hissed something in what they all took to be Japanese, and the old woman bowed and pattered away.

“She understands English quite well,” said Karen apologetically, “although she’s never learned to speak it fluently … She doesn’t come from Japan proper. She comes from the Loo-choo Islands. That’s the group, you know, that lies on the edge of the East China Sea, between Taiwan – Formosa, you know – and the mainland. They’re even a smaller people than the Japanese, but better-proportioned.”

“I thought she didn’t look
quite
Japanese.”

“There’s some question among ethnologists about the stock. It’s been said that the Loo-chooans have Ainu blood – they’re hairier and have better noses and less flattened cheeks, as you saw. And they’re the gentlest people in the world.”

A tallish young man with
pince-nez
glasses remarked: “Gentle is as gentle does. How gentle is that, Miss Leith?”

“Well,” said Karen with one of her rare smiles, “I don’t believe there’s been a lethal weapon used in Loo-choo for three hundred years.”

“Then I’m all for Loo-choo,” said the tallish young man ruefully. “A murderless Eden! It sounds incredible.”

“And not exactly typical of the Japanese, I should say,” put in Karen’s publisher.

Karen glanced at him. Then she passed the bowl of tea around. A literary reporter asked a question.

“Taste it … No, I don’t remember Lafcadio Hearn. I was barely seven when he died. But my father knew him well – they taught together at the Imperial University. . . . Isn’t it delicious?”

It was delicious irony, not tea. For the first recipient of the bowl was the tallish young man with the
pince-nez
glasses, whose name was Queen and who was present unimportantly as a writer of detective stories.

But Mr. Queen could not have been expected to detect the irony then; recognition was to come later, under less pleasant circumstances. At the moment he remarked that the tea
was
delicious, although privately he thought it a nasty mess, and passed the bowl on to his neighbor, a middle-aged male gorilla with the stoop of a student, who refused it and sent it on its way.

“I’ll share everything with you,” explained the big man pathetically to Karen, “but germs.”

Every one laughed, for it was an open secret that Dr. John MacClure knew more about Karen Leith than any one else in the world, and indeed that he proposed shortly to learn even more. His sharply light blue eyes in their chunky setting rarely left Karen’s face.

“Why, Doctor,” cried a lady who wrote stony, inhibited novels about New England, “you haven’t a spark of poetry in you!”

Dr. MacClure retorted: “Neither have germs,” and even Karen smiled faintly.

Manning of the
World
, who had been trying to recall the year of Lafcadio Hearn’s death, finally said: “Don’t bite me, Miss Leith. But wouldn’t that make you about forty?”

Karen began to stir another bowl of tea calmly.

The women looked at one another, knowing what Karen meant; for she had made her mark and won her man. One of them asked Dr. MacClure rather maliciously what
he
thought.

“I don’t practise obstetrics any more,” he said shortly.

And no one had to explain what
he
meant, for Dr. MacClure was the arch-enemy of death.

For a space they were still; as one who wrestled constantly with death Dr. MacClure gave forth a powerful effluvium that occasionally silenced people. There was something dusty and yet clean about him, as if even mortal dirt became sterilized on contact with him; and people thought of him a little uncomfortably in terms of carbolic acid and white robes, like the high priest of some esoteric cult. Legends had sprung up about him.

Money and fame meant nothing to him; perhaps, as a few envious souls in his profession commented bitterly, because he had plenty of both. Most human beings to him were insects crawling after microscopic values, creatures fit only for laboratory dissection; and when they annoyed him he slapped them down impatiently with his hairy, antiseptic paws.

He was an unkempt, absent man. No one could remember the time when he had not worn a certain ancient brown suit, unpressed, depilated, and edged with fuzz, which clung to his shoulders plaintively. He was a strong man, and a tired man, and while he did not look his age he nevertheless contrived to seem a hundred.

It was a curious paradox that this man, who made people feel like awed children, should himself be a child in everything but his work. He was angry, helpless, and socially timid; and quite unconscious of the effect he had on people.