The Elements of Computing Systems: Building a Modern Computer from First Principles 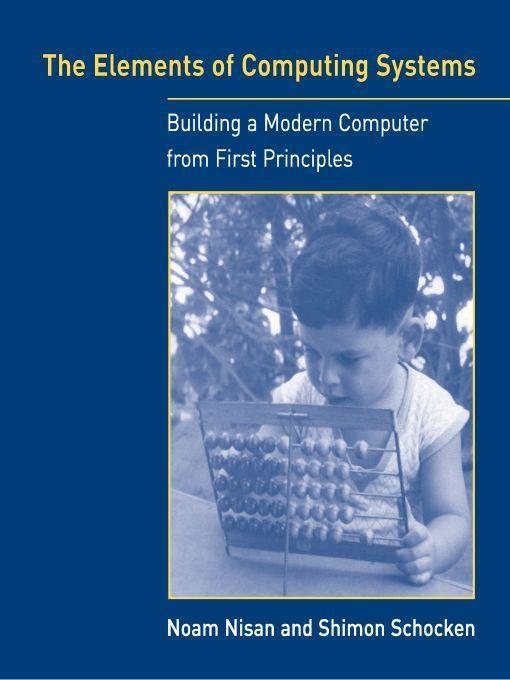 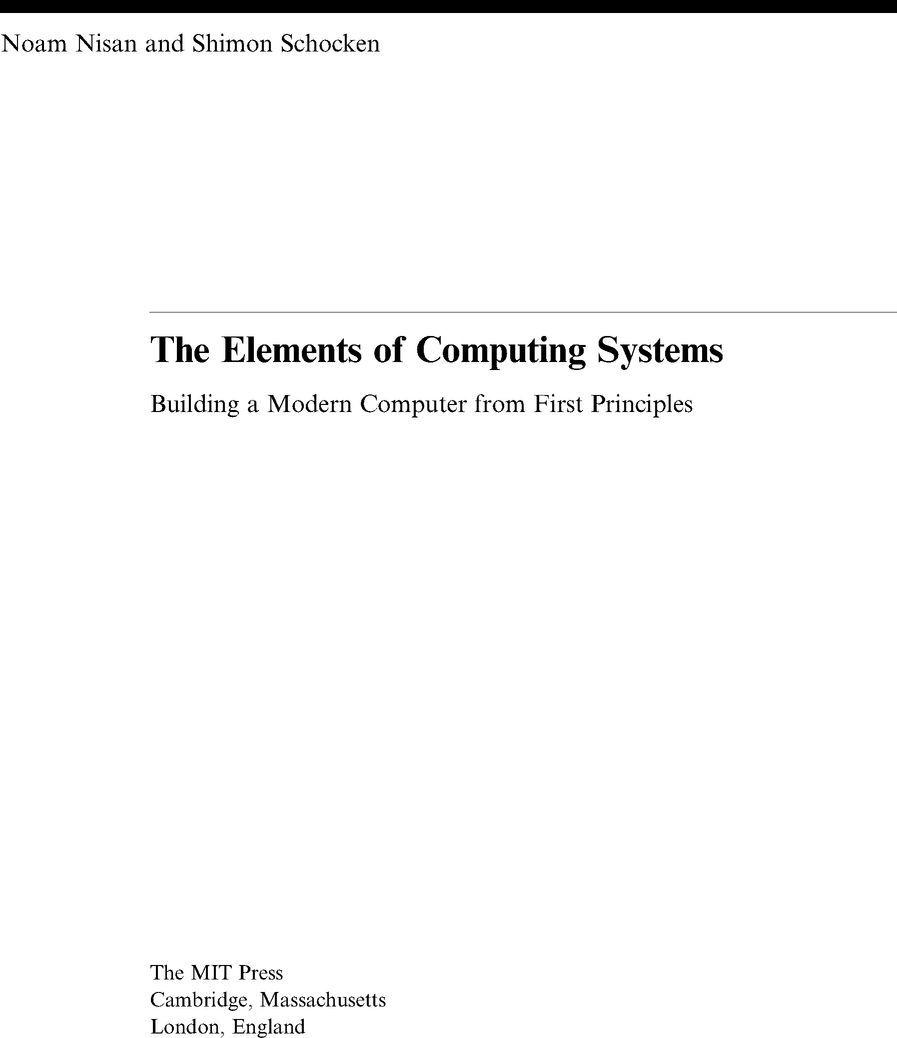 © 2005 Massachusetts Institute of Technology
All rights reserved. No part of this book may be reproduced in any form by any electronic or mechanical means (including photocopying, recording, or information storage and retrieval) without permission in writing from the publisher.
This book was set in Times New Roman on 3B2 by Asco Typesetters, Hong Kong.
Printed and bound in the United States of America.
Library of Congress Cataloging-in-Publication Data
Nisan, Noam.
The elements of computing systems: building a modern computer from first principles / Noam Nisan and Shimon Schocken.
p. cm.
Includes bibliographical references and index.
ISBN 0-262-14087-X (alk. paper)
1. Electronic digital computers. I. Schocken, Shimon. II. Title.
TK7888.3.N57 2005
004.16—dc22
2005042807
10 9 8 7 6 5 4 3 2 1
Note on Software
The book’s Web site (
http://www.idc.ac.il/tecs
) provides the tools and materials necessary to build all the hardware and software systems described in the book. These include a hardware simulator, a CPU emulator, a VM emulator, and executable versions of the assembler, virtual machine, compiler, and operating system described in the book. The Web site also includes all the project materials—about 200 test programs and test scripts, allowing incremental development and unit-testing of each one of the 12 projects. All the supplied software tools and project materials can be used as is on any computer equipped with either Windows or Linux.
To our parents,
For teaching us that less is more.
Preface

What I hear, I forget; What I see, I remember; What I do, I understand.

—Confucius, 551-479 BC
Once upon a time, every computer specialist had a gestalt understanding of how computers worked. The overall interactions among hardware, software, compilers, and the operating system were simple and transparent enough to produce a coherent picture of the computer’s operations. As modern computer technologies have become increasingly more complex, this clarity is all but lost: the most fundamental ideas and techniques in computer science—the very essence of the field—are now hidden under many layers of obscure interfaces and proprietary implementations. An inevitable consequence of this complexity has been specialization, leading to computer science curricula of many courses, each covering a single aspect of the field.
We wrote this book because we felt that many computer science students are missing the forest for the trees. The typical student is marshaled through a series of courses in programming, theory, and engineering, without pausing to appreciate the beauty of the picture at large. And the picture at large is such that hardware and software systems are tightly interrelated through a hidden web of abstractions, interfaces, and contract-based implementations. Failure to see this intricate enterprise in the flesh leaves many students and professionals with an uneasy feeling that, well, they don’t fully understand what’s going on inside computers.
We believe that the best way to understand how computers work is to build one from scratch. With that in mind, we came up with the following concept. Let’s specify a simple but sufficiently powerful computer system, and have the students build its hardware platform and software hierarchy from the ground up, starting with nothing more than elementary logic gates. And while we are at it, let’s do it right. We say this because building a general-purpose computer from first principles is a huge undertaking. Therefore, we identified a unique educational opportunity not only to build the thing, but also to illustrate, in a hands-on fashion, how to effectively plan and manage large-scale hardware and software development projects. In addition, we sought to demonstrate the ability to construct, through recursive ascent and human reasoning, fantastically complex and useful systems from nothing more than a few primitive building blocks.
Scope
The book exposes students to a significant body of computer science knowledge, gained through a series of hardware and software construction tasks. These tasks demonstrate how theoretical and applied techniques taught in other computer science courses are used in practice. In particular, the following topics are illustrated in a hands-on fashion:
■
Hardware:
Logic gates, Boolean arithmetic, multiplexors, flip-flops, registers, RAM units, counters, Hardware Description Language (HDL), chip simulation and testing.
■
Architecture:
ALU/CPU design and implementation, machine code, assembly language programming, addressing modes, memory-mapped input/output (I/O).
■
Operating systems:
Memory management, math library, basic I/O drivers, screen management, file I/O, high-level language support.
■
Programming languages:
Object-based design and programming, abstract data types, scoping rules, syntax and semantics, references.

The Wedding Bed (The Sun Never Sets, Book One) by Payne, Ava Archer
Isis' Betrayal by Brenda Trim, Tami Julka
The Cat Who Robbed a Bank by Lilian Jackson Braun
Golf In A Parallel Universe by Jimmy Bloodworth
Deadweather and Sunrise by Geoff Rodkey
The Brendan Voyage by Tim Severin
Where They Found Her by McCreight, Kimberly
Alaska Twilight by Colleen Coble
The Emerald Isle by Angela Elwell Hunt
My Dearest Friend (Books We Love Regency Romance) by Statham, Hazel
Our partner