Read The Exhibitionist (The Submissive #6) Online

The Exhibitionist (The Submissive #6) 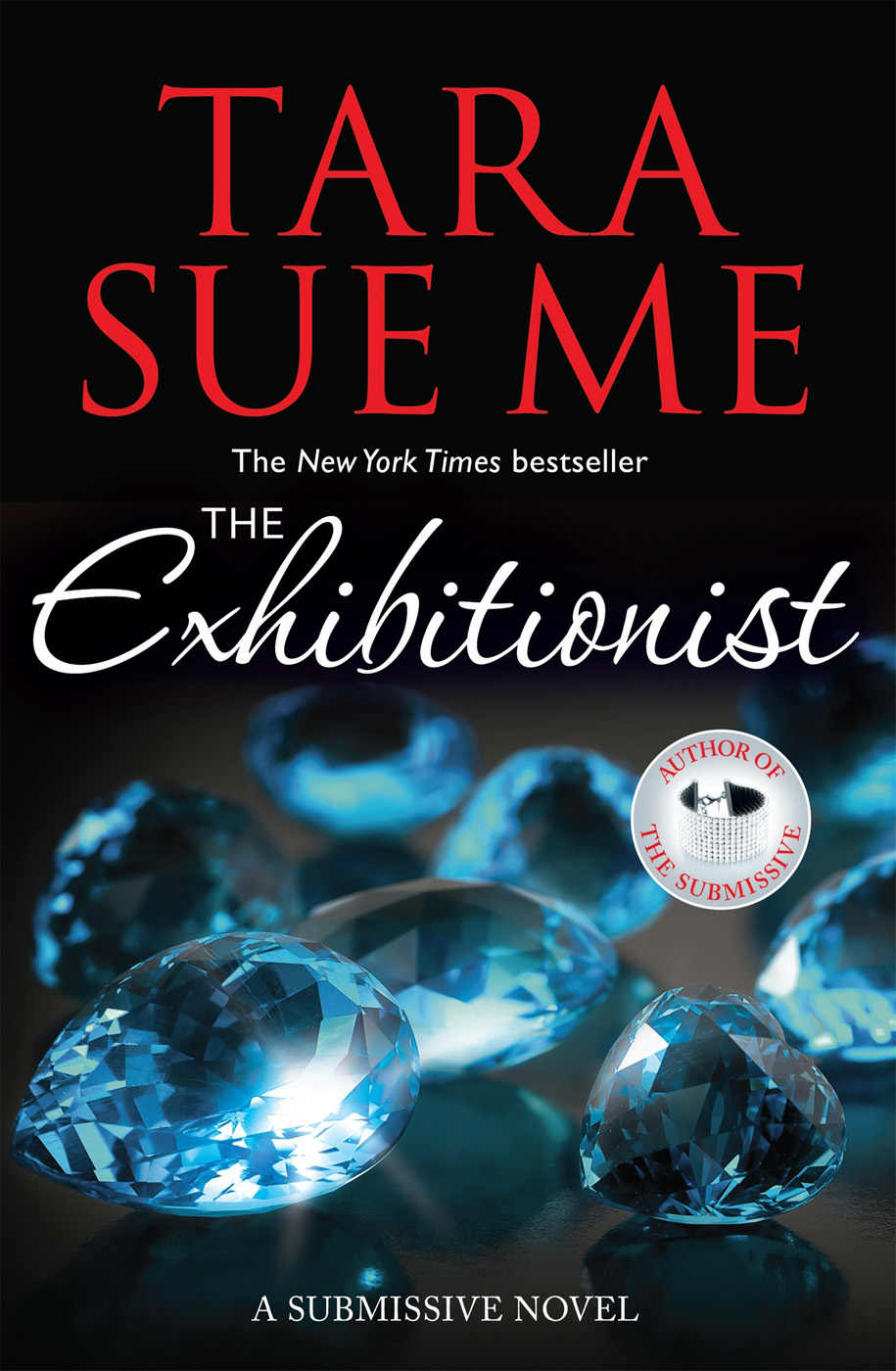 The right of Tara Sue Me to be identified as the Author of the Work has been asserted by her in accordance with the Copyright, Designs and Patents Act 1988.

Praise for Tara Sue Me

By Tara Sue Me

An enticing extract of
The Master

Discover more from Tara Sue Me

Tara Sue Me
wrote her first novel at the age of twelve. It would be twenty years before she picked up her pen to write the second.

After completing several traditional romances, she decided to try her hand at something spicier and started work on
The Submissive
. What began as a writing exercise quickly took on a life of its own, and sequels
The Dominant
and
The Training
soon followed. Originally published online, the trilogy was a huge hit with readers around the world. Each of the books has now been read and reread more than a million times.

Tara kept her identity and her writing life secret, not even telling her husband what she was working on. To this day, only a handful of people know the truth (though she has told her husband). They live together in the southeastern United States with their two children.

‘For those
Fifty Shades
fans pining for a little more spice on their e-reader … the
Guardian
recommends Tara Sue Me’s Submissive Trilogy, starring handsome CEO Nathaniel West, a man on the prowl for a new submissive, and the librarian Abby, who is yearning for something more’
Los Angeles Times

‘Unbelievably fantastic! … Nathaniel is something special, and he has that … something “more” that makes him who he is and makes me love him more than all the others. Beneath the cold and detached surface there is a sweet and loving man, and I adored how Abby managed to crack his armour a tiny bit at a time … I can’t wait to continue this beautiful story’
Mind Reader

‘Tara Sue Me’s
The Submissive
was a story unlike anything I’d ever read, and it completely captivated me … It’s an emotional, compelling story about two people who work to make their relationship exactly what they need it to be, and how they’re BOTH stronger for it’
Books Make Me Happy

‘I am awed by Tara Sue Me … a very powerful book written with grace and style. The characters were brought to life with a love story that will leave you wanting for more’
Guilty Pleasures Book Reviews

‘Very passionate … The characters are very easy to relate to and there is a depth to their feelings that is intriguing and engaging … intense and very, VERY H-O-T’
Harlequin Junkie

By Tara Sue Me

In The Submissive Series

In The Partners In Play Series

Book Six in The Submissive Series

She’s ready for even more…

When Abby West discovered her submissive desires, she felt like she was born anew. But lately, her Dominant husband hasn’t been the demanding Master who once fulfilled her every passion. Abby begins to crave something else – and to wonder if Nathaniel can still push her past her boundaries.

Before there was the fan fiction that became
Fifty Shades of Grey
, there was
The Submissive…
Indulge in the series that started it all:
The Submissive, The Dominant, The Training, The Chalet, The Enticement
and
The Collar.

To my sister
,
my secret keeper, my cheerleader, and friend.

When I started
The Submissive
in January 2009, I thought maybe ten people would read it. It was a new venture for me. Up until that point, I’d never written anything more graphic than a kiss. Truthfully, if you had told me everything that would happen as a result, I’d have had a good laugh, slapped you on the back, and told you that was the funniest thing I’d ever heard.

Well, what can I say? Life is funny sometimes.

Since I took that step forward and opened the bedroom door in my writing, so many incredible things have happened. I’ve met some of my closest friends and I’m now able to spend my days doing what I love.

And though I never planned to write Nathaniel and Abby beyond
The Training
, it’s been a lot of fun visiting with them again. Of course, I can’t do this alone, and I’m forever thankful for the people who helped me.

Christin, who helped me with the German parts. Any error is all me.

Tina, who very graciously read and gave me feedback.

Elle, who is always there for me to brainstorm with, laugh with, and share stories with. (P.S. Cole’s next!)

Claire, Jenn, and the entire team at NAL, whose enthusiasm for Nathaniel and Abby keeps me going.

Steve, who made this possible.

My children, who ensure I actually turn the laptop off at times.

You, my readers, who encourage me. I wish it were possible to meet every single one of you.

And Mr. Sue Me, who doesn’t bat an eye when I blurt out, “OMG, I JUST REALIZED WHAT HAPPENS NEXT!”

T
he smell of lust filled the room. In fact, the sexual tension was so high I would bet most of the women present longed to be in the place of the lovely redhead. Currently standing in front of Cole Johnson, the Partners in Play group’s newest senior Dominant, the petite woman trembled slightly. Although she was fully clothed, she displayed a vulnerability I was all too familiar with.

“Daniel told me she’s been having difficulties focusing,” my husband and Dominant, Nathaniel, said. We were at a play party being held at a private residence. He stood behind me, and though we were somewhat removed from the group, he still whispered. “He said he hopes the session with Cole will help.”

“With everyone watching?” I asked. “That seems unlikely.”

We couldn’t hear Cole’s voice; he spoke too softly. The submissive’s gaze drifted from him to the watching crowd. Bad move. Quick as a lightning strike, Cole grabbed her chin and forced her to meet his eyes.

“On me,” he said, the threat in his voice noticeable before it dropped back down to a whisper.