Read The Further Adventures of an Idiot Abroad Online

The Further Adventures of an Idiot Abroad 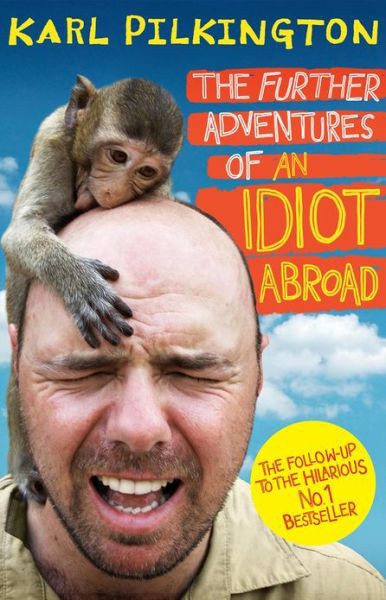 THE WORLD OF KARL PILKINGTON

THIS DIGITAL EDITION FIRST PUBLISHED IN 2012 BY CANONGATE BOOKS

THE MORAL RIGHTS OF THE AUTHORS HAVE BEEN ASSERTED

I was hoping to write this book as a diary like the last one, but the day I tried to start it I woke up in my hotel room in Thailand with my eyes burning and my head completely
numb. It was my own fault. I’d assumed the sachet on my bed in the hotel room was some kind of menthol stuff to put on the pillow to help me breathe more easily as I slept, but I later found
out it was medical gel to ease aching leg muscles. It was at this point that I decided I wasn’t in the right frame of mind to start a diary.

Looking back, it was no bad thing. I very rarely enjoy any of my trips at the time as my head is all over the place. I’m not always feeling my best, what with the flying and the throwing
up and the stupid stuff that Ricky and Steve make me do. So the idea of writing the book once I was safe and sound and a bit happier back at home made sense. I’ve realised that coming back
home is the best thing about going away in the first place.

This second set of trips was set up after a meeting with Ricky and Steve in their office. They came up with the idea of getting me to pick seven things that I would put on my Bucket List.

We’d actually had a similar conversation a few years ago as part of the podcasts. At the time, Ricky asked me what I want to do before I die and I said I wanted to kick a duck up the arse.
It’s just something I always have the urge to do when I see them sitting at the edge of a pond.

For the first series of
An Idiot Abroad
Ricky and Steve sent me round the world to see the Seven Wonders, hoping it would broaden my mind. This time it seemed like they were trying to
flatten it.

‘Come on. You can pick anything. Make your dreams come true! What about sky diving?’ said Steve. ‘That’s a classic Bucket List experience.’

‘Not a chance. Forget the whole idea.’

I’ve never been one for danger. I’ve done some daft things in my time like putting sausages in the toaster, and climbing out of the bathroom window to go and do my paper round when
me mam hid the front door keys from me, ’cos she didn’t want me going out delivering papers one bad winter. But they didn’t really strike me as dangerous at the time, and they all
served a purpose.

‘Okay,’ said Ricky. ‘How about we make a big list and you can choose what you want to do from that?’

In the end it felt like I was going to be in control, so I agreed.

This book tells the stories of the things I chose to do, plus the extra things that Ricky and Steve threw in along the way. That was the plan anyway, but when I sat down to
write the book I realised that between the first series and the second series, the latest Christmas Special with Warwick Davis, and all the other random stuff I’ve done in my life, I’ve
actually ticked off more than 60% of the Bucket List. I reckon that’s got to be some sort of record. So in the end I’ve decided to write about all of them and also throw in an opinion
or two on the remaining things on the list. Most of these are things that have never appealed, like:

This is when people have it away in the toilets on a plane. I guess this explains why there are always queues whenever I need the loo on a flight. I wish they’d use
the system they use at the supermarket meat counter where they give you a ticket with a number on which the pilot could then read out when it’s your turn to use the toilet. This has got
to be safer than people stood queuing in the aisles.

I’m guessing here but I bet people only do the mile high club thing on the outward journey as after two weeks of being away with someone you’re normally sick of them and would
rather watch the inflight movie. Also it’s the return journey when the toilets get blocked due to everyone having dodgy guts after eating foreign food. On my flight back from India
there’s no way anyone could have had a romantic moment in there after the state I left it in.

So that’s the book. Sitting down to write it has been a nice way to sum up three years of travelling.

What follows is the original list of the 100 things I could choose from. As you can see, kicking a duck up the arse wasn’t on it.

3. Spend a night on your own private desert island

6. Fly in a helicopter over the Grand Canyon

7. See elephants in the wild

11. Ride a camel to the Pyramids

16. Come face-to-face with mountain gorillas in their natural habitat

21. Get into the Guinness Book of World Records

23. Drink a beer at Oktoberfest

27. Spend a night in a haunted house

28. Meet someone with your own name

32. Paraglide from a mountain

34. Skydive from a plane

42. Cycle a leg of the Tour de France

44. See the glaciers before they melt

46. Get a complete makeover

50. Become a vegetarian for a week

51. Stand at the North or South Pole

54. Visit the Seven Wonders of the World

56. Spend the night in an igloo

58. Stand on the international date line

61. Get a tattoo and/or piercing

63. Ride something bigger than a horse

64. Build your own house

69. Protest at a demonstration

70. Run with the bulls in Pamplona

71. Canoe up the Nile River

77. Sleep under the stars

78. Ride in a gondola in Venice

79. Have lunch with the Queen of England

80. Walk the Great Wall of China

81. Do some charity work

84. Go on an African safari

85. See the statues on Easter Island

87. Shake hands with the Pope

90. Partake in a Japanese tea ceremony

92. Jump from a cliff into the sea

94. Take part in a fire-walking ceremony

96. Spend the Fourth of July in the USA

98. Live with the Masai people

99. See the wildebeest migration in the Masai Mara