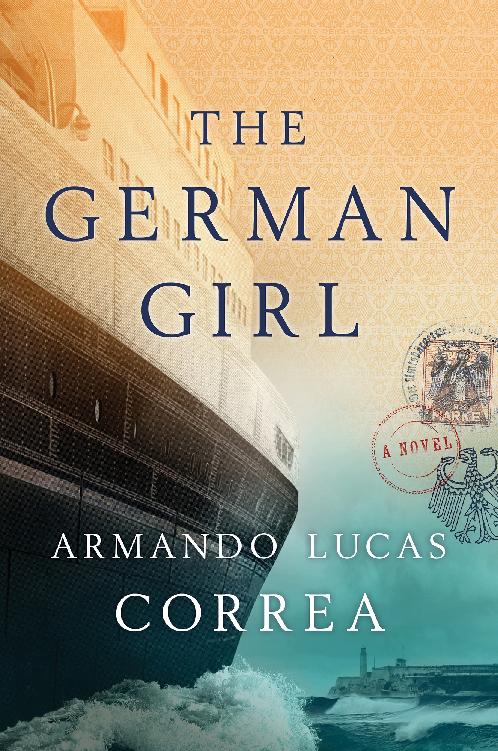 Praise for
The German Girl

“This fascinating novel of the tragic
St. Louis,
the ship of rejected humans, is a brilliant entrée into the souls and family complexities, the terrors, ardors, endeavors, and hopeless valor of people who have been written off not only by a tyrant, Hitler, but who have been rejected as a nuisance by a self-absorbed world. Over the years, and in a new, ambiguous age of people in peril and adrift on the world’s seas, this magnificent novel bespeaks this eternal injustice, as well as the unexpected and intricate tragedies of its powerfully imagined characters.”

“An unforgettable and resplendent novel which will take its place among the great historical fiction written about World War II. Hannah Rosenthal will remain in your heart, and her determination to tell the story of what she saw, lived, and lost will change the way you look at the world.”

“A vital tribute to liberty, love, and justice . . . one of the most fascinating and extraordinary literary events of recent times.”

“Powerful and affecting . . . that sheds light on a sorrowful piece of Holocaust history.”

“I found myself unable to put the book down. I was able to identify with what my parents must have experienced first in Germany and later on the
St. Louis
. . . beautiful and heartbreaking.”

“It conveys the true essence of the tragedy of the
St. Louis
. . . [it was] so true to our many life experiences.”

“Profound and moving . . . This novel touched me personally, especially because it is written from the point of view of a girl, just like me, on the ship. This tragedy, ignored for so many years, contains a lesson the world must learn and never forget: compassion for refugees.”

To my children Emma, Anna, and Lucas

To Ana Maria (Karman) Gordon, Judith (Koeppel) Steel, and Herbert Karliner, who were my children’s age when they boarded the
St. Louis
at the port of Hamburg in 1939

You are my witnesses.

Memories are what you no longer want to remember.

I
was almost twelve years old when I decided to kill my parents.

I had made up my mind. I’d go to bed and wait until they fell asleep. That was always easy to tell because Papa would lock the big, heavy double windows and close the thick greenish-bronze curtains. He’d repeat the same things he said every night after supper, which in those days had become little more than a steaming bowl of tasteless soup.

“There’s nothing to be done. It’s all over. We have to leave.”

Then Mama would start shouting, her voice cracking as she blamed him. She’d pace the whole apartment—her fortress at the heart of a sinking city; the only space she’d known for more than four months—until she wore herself out. Then she’d embrace Papa, and her feeble moans would finally cease.

I’d wait a couple of hours. They wouldn’t put up any resistance. I
knew Papa had already given up and was willing to go. Mama would be more difficult, but she took so many sleeping pills, she’d be fast asleep, steeped in her jasmine and geranium essences. Although she had gradually increased the dose, she still awakened during the night crying. I would rush to see what had happened, but all I could make out through the half-open door was Mama inconsolable in Papa’s arms, like a little girl recovering from a terrible nightmare. Except that, for her, the nightmare was being awake.

Nobody heard my cries anymore; nobody bothered about them. Papa told me I was strong. I would survive whatever happened. But not Mama. The pain was gnawing away at her. She was the child in a house where daylight was no longer allowed. For four months, she had been sobbing each night, ever since the city was covered in broken glass and filled with the constant stench of gunpowder, metal, and smoke. That was when they started planning our escape. They decided we’d abandon the house where I was born, and forbade me to go to school, where nobody liked me anymore. Then Papa gave me my second camera.

“So that you can leave a trail out of the labyrinth like Ariadne,” he whispered.

I dared to think it would be best to be rid of them.

I thought about diluting aspirin in Papa’s food or stealing Mama’s sleeping pills—she wouldn’t last a week without them. The only problem was, first of all, my doubts. How many aspirin would he have to swallow to give him a lethal ulcer, internal bleeding? How long could Mama really survive without sleep? Anything bloody was out of the question, because I couldn’t bear the sight of blood. So the best thing would be for them to die of suffocation. To smother them with a huge feather pillow. Mama made it clear that her dream had always been for death to take her by surprise while she slept. “I can’t bear farewells,” she would say, staring straight at me—or, if I wasn’t listening, she would grab me by the arm and squeeze it with the little strength she had left.

One night I woke up during the night in tears, thinking my crime had already been committed. I could see my parents’ lifeless bodies but
was unable to shed a single tear. I felt free. Now there would be no one to force me to move to a filthy neighborhood, to leave behind my books, my photographs, my cameras, to live with the terror of being poisoned by your own father and mother.

I started to tremble. I called out “Papa!” But no one came to my rescue. “Mama!” There was no going back. What had I turned into? How did I end up so low? What would I do with their bodies? How long would it take for them to decompose?

Everyone would think it was suicide. No one would question it. My parents had been suffering constantly for four months by then. Others would see me as an orphan; I’d see myself as a murderer. My crime existed in the dictionary. I looked it up. What a dreadful word. Just saying it gave me the shivers.
Parricide
. I tried to repeat it and couldn’t. I was a murderer.

It was so easy to identify my crime, my guilt, my agony. What about my parents, who were planning to get rid of me? What was the name for someone who killed their children? Was that such a terrible crime there wasn’t even a word for it in the dictionary? That meant they could get away with it. Whereas I had to bear the weight of death and a nauseating word. You could kill your parents, your brothers and sisters. But not your children.

I prowled through the rooms, which to me seemed increasingly small and dark, in a house that would soon no longer be ours. I looked up at the unreachable ceiling, walked down hallways lined with the images of a family that was disappearing little by little. Light from the lamp with the snowy-white shade in Papa’s library filtered out into the corridor where I stood disoriented, unable to move. I watched as my pale hands turned golden.

I opened my eyes and was in the same bedroom, surrounded by well-worn books and dolls I had never played with, nor ever would. I closed my eyes and sensed it wouldn’t be long before we fled without a set destination on a huge ocean liner from a port in this country where we had never belonged.

In the end, I didn’t kill my parents. I didn’t have to. Papa and Mama were the guilty ones. They forced me to throw myself into the abyss alongside them.

The apartment’s smell had become intolerable. I didn’t understand how Mama could live between those walls lined with moss-green silk that swallowed what little daylight there was at that time of year. It was the smell of enclosure.

We had less time to live. I knew it; I felt it. We wouldn’t be spending the summer there in Berlin. Mama had put mothballs in the closets to preserve her world, and the pungent odor filled the apartment. I had no idea what she was trying to protect, since we were going to lose everything regardless.

“You smell like the old ladies on Grosse Hamburger Strasse,” Leo taunted me. Leo was my only friend; the one person who dared look me in the face without wanting to spit on me.

Spring in Berlin was cold and rainy, but Papa often left without taking his coat. Whenever he went out in those days, he wouldn’t wait for the elevator but took the stairs, which creaked as he trod on them. I wasn’t allowed to use the stairs, though. He didn’t walk down because he was in a hurry but because he didn’t want to bump into anyone else from the building. The five families living on the floors beneath ours were all waiting for us to leave. Those who were once our friends were no longer friendly. Those who used to thank Papa or who tried to ingratiate themselves with Mama and her friends—who praised her good taste or asked for advice on how to make a brightly colored handbag match their fashionable shoes—now looked down their noses at us and could denounce us at any moment.

Outsourced by R. J. Hillhouse
Anything For You by Macy, Kaydence
Chronicles of Corum by Michael Moorcock
Of Darkness and Crowns by Trisha Wolfe
Wonderlust by B.L Wilde
Cursed in the Blood: A Catherine LeVendeur Mystery by Newman, Sharan
This Is Where I Sleep by Tiffany Patterson
To Love an Alpha (Paranormal Werewolf Shifter Romance) by Wilson, Joanna
Prophecy's Ruin (Broken Well Trilogy) by Sam Bowring
All Monsters Must Die by Magnus Bärtås
Our partner