Read The Ghosts of Belfast Online

The Ghosts of Belfast 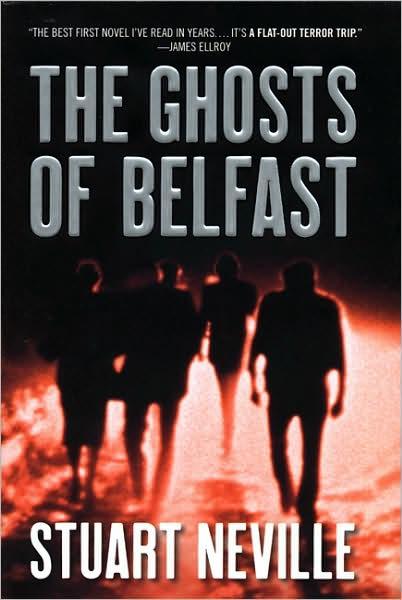 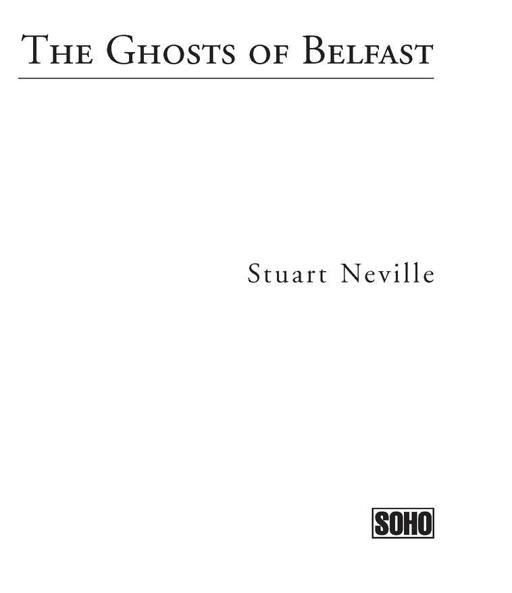 Published in Great Britain in 2009 by
Harvill Secker Random House as
The Twelve
.

“The place that lacks its ghosts is a barren place.”

Maybe if he had one more drink they’d leave him alone. Gerry Fegan told himself that lie before every swallow. He chased the whiskey’s burn with a cool black mouthful of Guinness and placed the glass back on the table.
Look up and they’ll be gone
, he thought.

No. They were still there, still staring. Twelve of them if he counted the baby in its mother’s arms.

He was good and drunk now. When his stomach couldn’t hold any more he would let Tom the barman show him to the door, and the twelve would follow Fegan through the streets of Belfast, into his house, up his stairs, and into his bedroom. If he was lucky, and drunk enough, he might pass out before their screaming got too loud to bear. That was the only time they made a sound, when he was alone and on the edge of sleep. When the baby started crying, that was the worst of it.

Fegan raised the empty glass to get Tom’s attention.

“Haven’t you had enough, Gerry?” Tom asked. “Is it not home time yet? Everyone’s gone.”

“One more,” Fegan said, trying not to slur. He knew Tom would not refuse. Fegan was still a respected man in West Belfast, despite the drink.

Sure enough, Tom sighed and raised a glass to the optic. He brought the whiskey over and counted change from the stained tabletop. The gummy film of old beer and grime sucked at his shoes as he walked away.

Fegan held the glass up and made a toast to his twelve companions. One of the five soldiers among them smiled and nodded in return. The rest just stared.

None of the twelve reacted, but Tom looked back over his shoulder. He shook his head and continued walking to the bar.

Fegan looked at each of his companions in turn. Of the five soldiers three were Brits and two were Ulster Defence Regiment. Another of the followers was a cop, his Royal Ulster Constabulary uniform neat and stiff, and two more were Loyalists, both Ulster Freedom Fighters. The remaining four were civilians who had been in the wrong place at the wrong time. He remembered doing all of them, but it was the civilians whose memories screamed the loudest.

There was the butcher with his round face and bloody apron. Fegan had dropped the package in his shop and held the door for the woman and her baby as she wheeled the pram in. They’d smiled at each other. He’d felt the heat of the blast as he jumped into the already moving car, the blast that should have come five minutes after they’d cleared the place.

The other was the boy. Fegan still remembered the look in his eyes when he saw the pistol. Now the boy sat across the table, those same eyes boring into him.

Fegan couldn’t hold his gaze, so he turned his eyes downward. Tears pooled on the tabletop. He brought his fingers to the hollows of his face and realised he’d been weeping.

He wiped the table with his sleeve and sniffed back the tears. The pub’s stale air clung to the back of his throat, as thick as the dun-colored paint on the walls. He scolded himself. He neither needed nor deserved pity, least of all his own. Weaker men than him could live with what they’d done. He could do the same.

A hand on his shoulder startled him.

Tom slipped into the storeroom behind the bar. McKenna paid him to be discreet, to see and hear nothing.

Fegan knew the politician would come looking for him. He was smartly dressed in a jacket and trousers, and his fine-framed designer glasses gave him the appearance of an educated man. A far cry from the teenager Fegan had run the streets with thirty years ago. Wealth looked good on him.

“Well, drink up and I’ll run you home.” McKenna smiled down at him, his teeth white and even. He’d had them fixed so he could look presentable for the cameras. The party leadership had insisted on it before they gave him the nomination for his seat in the Assembly. At one time, not so long past, it had been against party policy to take a seat at Stormont. But times change, even if people don’t.

“It’s no trouble,” McKenna said. “Besides, I wanted a word.”

Fegan nodded and took another mouthful of stout. He held it on his tongue when he noticed the boy had risen from his place on the other side of the table. It took a moment to find him, shirtless and skinny as the day he died, creeping up behind McKenna.

The boy pointed at the politician’s head. He mimed firing, his hand thrown upwards by the recoil. His mouth made a plosive movement, but no sound came.

Fegan swallowed the Guinness and stared at the boy. Something stirred in his mind, one memory trying to find another. The chill at his center pulsed with his heartbeat.

“Do you remember that kid?” he asked.

“I met his mother today. I was in the graveyard and she came up to me.”

“I know you did,” McKenna said, taking the glass from Fegan’s fingers.

“Gerry, I don’t want to know what she said. I’m more curious about what you said to her. That’s what we need to talk about. But not here.” McKenna squeezed Fegan’s shoulder. “Come on, now.”

“He hadn’t done anything. Not really. He didn’t tell the cops anything they didn’t know already. He didn’t deserve that. Jesus, he was seventeen. We didn’t have to—”

One hard hand gripped Fegan’s face, the other his thinning hair, and the animal inside McKenna showed itself. “Shut your fucking mouth,” he hissed. “Remember who you’re talking to.”

Fegan remembered only too well. As he looked into those fierce blue eyes he remembered every detail. This was the face he knew, not the one on television, but the face that burned with white-hot pleasure as McKenna set about the boy with a claw hammer, the face that was dotted with red when he handed Fegan the .22 pistol to finish it.

Fegan gripped McKenna’s wrists and prised his hands away. He stamped on his own anger, quashed it.

The smile returned to McKenna’s lips as he pulled his hands away from Fegan’s, but went no further. “Come on,” he said. “My car’s outside. I’ll run you home.”

The twelve followed them out to the street, the boy sticking close to McKenna. McKenna had climbed high in the party hierarchy, but not so high he needed an escort to guard him. Even so, Fegan knew the Mercedes gleaming in the orange street lights was armored, both bullet- and bomb-proof. McKenna probably felt safe as he lowered himself into the driver’s seat.

“Big day today,” McKenna said as he pulled the car away from the curb, leaving the followers staring after them. “Sorting the offices up at Stormont, my own desk and everything. Who’d have thought it, eh? The likes of us up on the hill. I wangled a secretary’s job for the wife. The Brits are throwing so much money at this I almost feel bad taking it off them. Almost.”

On Her Six (Under Covers) by Christina Elle
Revolution in the Valley: The Insanely Great Story of How the Mac Was Made by Andy Hertzfeld
Confidentially Yours by Charles Williams
Clipped by Love (Bellevue Bullies #2) by Toni Aleo
The Sticky Cowgirl (Lone Star Sweets, Book 2) by Matthews, Lissa
Traitors of the Tower by Alison Weir
The Orphans (Book 3): Strangers by Evans, Mike
This Is the Night by Jonah C. Sirott
The Secrets of Mary Bowser by Lois Leveen
Caminarás con el Sol by Alfonso Mateo-Sagasta
Our partner