Read The Ground Beneath Her Feet Online

The Ground Beneath Her Feet 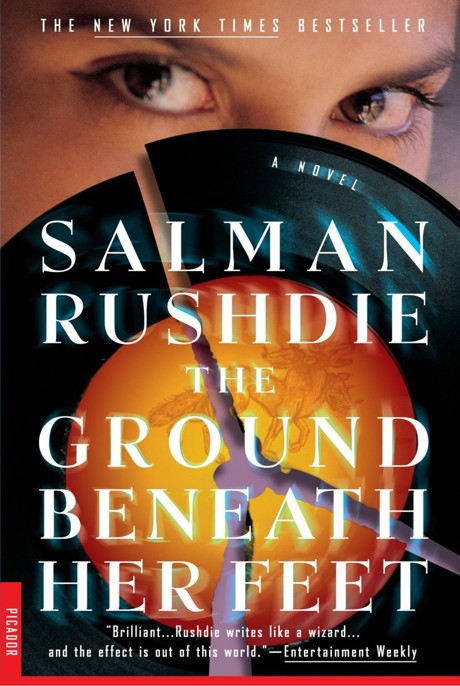 “The Ground Beneath Her Feet
is an exceptional, sweeping novel by one of the most gifted writers of our time.… Those who have never read Rushdie should begin with this new novel; the immensity of Rushdie’s vision, his hilarious wordplay, his commentary on love and living, may just shake the very ground beneath your feet.”
—
The Calgary Straight

“Beguiling.…
[The Ground Beneath Her Feet]
is probably Rushdie’s most accessible work and certainly his most joyful.”
—
Winnipeg Free Press

“Rushdie weaves with skill the complex layers of such a harrowing myth that will touch you closely, reaching for the secret feelings you didn’t know you had.… Only a great writer like Rushdie can acknowledge the power of love which allows the soul to be free, overcoming all hardships and obstacles.”
—
The Edmonton Sun

“Panoramic.… Replete with the surpluses of intellect and fancy that define Rushdie’s earlier fiction,
The Ground Beneath Her Feet
[is] a three-pound novel of exile that also manages to be an ode to literature, a satirical political commentary, and, of course, a love story. Swirling with puns and allusions … the work is sensate with the smells and noises and overload ambience of both Bombay and New York.… Rushdie has created a multilayered world of exile and dualism.… Epic.”
—
Victoria Times Colonist

“Astonishing.… Ever willing to stir things up, Rushdie freely blends fiction into fact, turns metaphors into literal events, and transforms political and psychic states into physical ones. Those who have admired his verbal and imaginative pyrotechnics before will find his energy and skills fully intact.”
—
New Brunswick Telegraph-Journal

“Brilliant.… Rushdie writes like a wizard … and the effect is out of this world.”
—
Entertainment Weekly

“Extraordinary.… The world these characters inhabit is pure Rushdie. The fabulous and magical mix with the sordid and the profane.… Plot is invariably advanced by catastrophe—bizarre deaths and unexplained fires, multiple earthquakes.… The writing is funny, silly, erudite, crude, precise, unbuttoned.… Daring.”
—
The Montreal Gazette

“His exuberant and elegiac new novel … his best since
Midnight’s Children …
is full of music and murder.… What Rushdie is doing goes well beyond joke and whimsy. The world of this novel—several countries, East and West—exists at a wide angle to reality but also makes us wonder what would happen if the angle closed. Rushdie is demonstrating … the difficulty in telling where fiction begins and ends.… In this book he not only repairs much damage done to fiction and the world, [he] makes us laugh with the sheer proliferating energy of his call.”
—
The New York Times

“The Ground Beneath Her Feet
is a sprawling, epic novel spanning three continents and several generations. It is an ambitious examination of modern society, mythology and love. Rushdie’s novel is a fascinating perspective on fame, mythmaking and the toll it takes on the mind and spirit.… Rushdie is a master storyteller, effortlessly weaving popular music (real and imagined) with history (real and imagined), religion, culture, nature and the vagaries of human nature.
The Ground Beneath Her Feet
is proof of his vision and power as a master storyteller.”
—
The St. John’s Telegram

“Time and space, understood conventionally, have never been enough for Rushdie’s antic imagination, and here he needs two parallel universes to contain this playful, highly allusive journey through the last 40 years of pop Culture.… Comic and dazzling
[The Ground Beneath Her Feet
is] a spirited, head-spinning entertainment from a writer of undeniable genius.”
—
Publishers Weekly

“It’s the best thing ever written about rock and roll. It
is
rock and roll.… A book of profound affirmation, of indomitable humanity, of love. A book of greatness.”
—
The Baltimore Sun

The Jaguar Smile
Imaginary Homelands
The Wizard of Oz

All rights reserved under International and Pan-American Copyright Conventions. Published in Canada by Vintage Canada, a division of Random House of Canada Limited, in 2000. First published in hardcover in Canada by Alfred A. Knopf Canada, Toronto, and simultaneously in the United States by Henry Holt and Company, Inc., New York, in 1999. Distributed by Random House of Canada Limited, Toronto.

Vintage Canada and colophon are registered trademarks of Random House of Canada Limited.

Grateful acknowledgement is made to the following for permission to reprint previously published material:

Rushdie, Salman
The ground beneath her feet

Set up no stone to his memory.
Just let the rose bloom each year for his sake.
For it is Orpheus. His metamorphosis
into this and that. We should not trouble

about other names. Once and for all
it’s Orpheus when there’s singing.

1. The Keeper of Bees

4. The Invention of Music

O
n St. Valentine’s Day, 1989, the last day of her life, the legendary popular singer Vina Apsara woke sobbing from a dream of human sacrifice in which she had been the intended victim. Bare-torsoed men resembling the actor Christopher Plummer had been gripping her by the wrists and ankles. Her body was splayed out, naked and writhing, over a polished stone bearing the graven image of the snakebird Quetzalcoatl. The open mouth of the plumed serpent surrounded a dark hollow scooped out of the stone, and although her own mouth was stretched wide by her screams the only noise she could hear was the popping of flashbulbs; but before they could slit her throat, before her lifeblood could bubble into that terrible cup, she awoke at noon in the city of Guadalajara, Mexico, in an unfamiliar bed with a half-dead stranger by her side, a naked mestizo male in his early twenties, identified in the interminable press coverage that followed the catastrophe as Raúl Páramo, the playboy heir of a well-known local construction baron, one of whose corporations owned the hotel.

She had been perspiring heavily and the sodden bedsheets stank of the meaningless misery of the nocturnal encounter. Raúl Páramo was
unconscious, white-lipped, and his body was galvanized, every few moments, by spasms which Vina recognized as being identical to her own dream writhings. After a few moments he began to make frightful noises deep in his windpipe, as if someone were slitting his throat, as if his blood were flowing out through the scarlet smile of an invisible wound into a phantom goblet. Vina, panicking, leapt from the bed, snatched up her clothes, the leather pants and gold-sequinned bustier in which she had made her final exit, the night before, from the stage of the city’s convention centre. Contemptuously, despairingly, she had surrendered herself to this nobody, this boy less than half her age, she had selected him more or less at random from the backstage throng, the lounge lizards, the slick, flower-bearing suitors, the industrial magnates, the aristotrash, the drug underlords, the tequila princes, all with limousines and champagne and cocaine and maybe even diamonds to bestow upon the evening’s star.

The man had begun to introduce himself, to preen and fawn, but she didn’t want to know his name or the size of his bank balance. She had picked him like a flower and now she wanted him between her teeth, she had ordered him like a take-home meal and now she alarmed him by the ferocity of her appetites, because she began to feast upon him the moment the door of the limo was closed, before the chauffeur had time to raise the partition that gave the passengers their privacy. Afterwards he, the chauffeur, spoke with reverence of her naked body, while the newspapermen plied him with tequila he whispered about her swarming and predatory nudity as if it were a miracle, who’d have thought she was way the wrong side of forty, I guess somebody upstairs wanted to keep her just the way she was. I would have done anything for such a woman, the chauffeur moaned, I would have driven at two hundred kilometres per hour for her if it were speed she wanted, I would have crashed into a concrete wall for her if it had been her desire to die.

Only when she lurched into the eleventh-floor corridor of the hotel, half dressed and confused, stumbling over the unclaimed newspapers, whose headlines about French nuclear tests in the Pacific and political unrest in the southern province of Chiapas smudged the bare soles of her feet with their shrieking ink, only then did she understand that the suite of rooms she had abandoned was her own, she had
slammed the door and didn’t have the key, and it was lucky for her in that moment of vulnerability that the person she bumped into was me, Mr. Umeed Merchant, photographer, a.k.a. “Rai,” her so to speak chum ever since the old days in Bombay and the only shutterbug within one thousand and one miles who would not dream of photographing her in such delicious and scandalous disarray, her whole self momentarily out of focus and worst of all looking her age, the only image-stealer who would never have stolen from her that frayed and hunted look, that bleary and unarguably bag-eyed helplessness, her tangled fountain of wiry dyed red hair quivering above her head in a woodpeckerish topknot, her lovely mouth trembling and uncertain, with the tiny fjords of the pitiless years deepening at the edges of her lips, the very archetype of the wild rock goddess halfway down the road to desolation and ruin. She had decided to become a redhead for this tour because at the age of forty-four she was making a new start, a solo career without Him, for the first time in years she was on the road without Ormus, so it wasn’t really surprising that she was disoriented and off balance most of the time. And lonely. It has to be admitted. Public life or private life, makes no difference, that’s the truth: when she wasn’t with him, it didn’t matter who she was with, she was always alone.