Read The Happiest Days of Our Lives Online

The Happiest Days of Our Lives 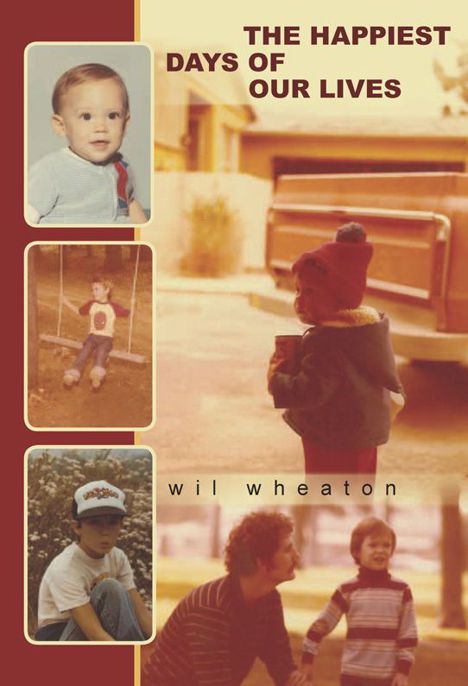 The Happiest Days of Our Lives
Copyright © 2009

by Wil Wheaton. All rights reserved.

introduction to the subterranean press edition

what a long strange trip it’s been

beyond the rim of the starlight

exactly what i wanted

close your eyes and then it’s past

my mind is filled with silvery star

when you dressed up sharp and you felt all right

i am the modren man

a portrait of the artist as a young geek

in which time is well spent…

green grass and high tides forever (and ever and

introduction to the subterranean press edition

M
y first book,
Dancing Barefoot
, was a collection of five short but true essays about my life as a husband, stepfather, and former
Star Trek
actor. My second book,
Just A Geek
, was considerably longer, and recounted my journey from actor to writer and back again. My third book,
The Happiest Days of Our Lives
, was a collection of stories about how I became a geek, as well as a celebration of the geek culture that’s meant so much to me for most of my life.

When I chose which stories to include in
The Happiest Days of Our Lives
, I had this idea that I couldn’t include any that were too similar to each other. This was a silly idea because all of the stories are similar to a certain extent—I figure prominently in each of them, and the common theme of geek nostalgia runs through the whole book. It was also a very bad idea, because I ended up cutting several stories that I absolutely love.
The Happiest Days of Our Lives
, as published by Monolith Press, is still a nice little book, and it was very well received, but I haven’t been able to shake the feeling that it could have been so much nicer if I had just gotten out of the way.

This expanded edition restores those stories to their proper place, where I wish they’d been all along. I am especially grateful that Subterranean Press gave me the opportunity to cast Raise Dead on them, and let me include a few other stories that were written after
The Happiest Days of Our Lives
was originally published. This volume can safely be called The Author’s Preferred Edition That Is Totally Awesome And Has All The Stuff He Shouldn’t Have Cut In The First Place. Or, I guess, you could just call it the expanded edition, which doesn’t sound nearly as impressive, but is easier to write on a single grain of rice at the county fair.

O
ver the last six years, I’ve written thousands of posts for my blog, talking about every subject imaginable. Nothing generates as much email and as many comments as stories like the ones in this book. It’s not surprising, really, because these stories are the most fun to write and are the closest to my heart: stories that celebrate geek culture, passing my geeky hobbies and values along to my own children, and vividly painting what it meant to grow up in the ’70s and come of age in the ’80s as part of the video game/D&D/BBS/
Star Wars
figures generation. There are also a couple of stories about an obscure science fiction show I was a part of for a few years, but I don’t think anyone really watched that.

Everything in this book originally appeared online in some form or another. Each time one of them was published, at least one reader told me, “Hey, you should put this into a book some day.” I never said it, but that was sort of the idea all along.

I had a wonderful time revisiting the happiest days of my life while I worked on this book. Thanks for letting me share them with you.

what a long strange trip it’s been

Ryan and Nolan are my wife Anne’s sons from a previous marriage. They were 6 and 4 when I entered their lives, and I’ve raised them as my own ever since. I’ve always called them my stepsons out of respect for their relationship with their biological father, but I’ve never made an emotional distinction; they are my sons in every way that matters
.

I adore them, and as their primary father figure, I’ve worked very hard to pass along my core values of honesty, integrity, hard work and compassion to them. Over the years, I’ve also shared (intentionally and not) the things that make me a geek, like my love of science, comic books, science fiction, and math. This is just one example of an all-too frequent occurrence in our house
.

I
asked my stepson Ryan what the formula was to find the circumference of a circle if you know its diameter.

“Why didn’t you remember that formula?” he asked.

“Because that part of my brain doesn’t get used as frequently as it once did, and even when it got used almost every day, I had a…difficult…relationship with it.”

“Why did you want to know what it was?” he asked.

“I just had this idea, and I wanted to know something…”

I looked up at him, unable to contain the huge smile that spread across my face.

“I’ve been riding this planet for almost twenty billion miles,” I said.

My mother says that I got some details wrong in this story. I believe, however, that it’s as true as anyone’s memories of being six years old can be. The details may not be right, but the heart of the story still beats in my chest, 30 years later.

W
hile on my daily walk through the neighborhood, I passed a set of twins who live up the block from me. They’re girls, in first or second grade. They’re painfully adorable little kids who call me “Mr. Wheaton” and always smile and wave when they drive by with their parents. Their names aren’t important, but H loves my dogs, Ferris and Riley, and A always wants to know where “the grills” are (as my wife calls them) when Anne and I walk without the dogs.

They were sitting on their driveway, drawing with sidewalk chalk and talking.

H wiped chalk off her fingers and said, “Guess what, Mr. Wheaton! Today? In school? Melissa C. got her name on the board!”

“It’s not good to get your name on the board,” I said.

“I don’t ever get my name on the board either!” A said.

I took a few steps away, and a long-forgotten first-grade memory of my own rose up and crashed over me in a powerful wave, washing the smile from my face and the joy from my heart. The memory was so clear, I could close my eyes and see everything in detail that astonished me. It’s almost like I cracked open a time capsule that my mind sealed in 1978.

I lived in a rural area of Los Angeles called Sunland. I can only see it through the eyes of a 6-year-old, so the whole place is forever the late ’70s, bathed in the golden red sunset of a summer afternoon: tract houses, wide sidewalks, and lots of trees. It was a great place to grow up, but the schools had a really terrible reputation, so my parents put me into a private Christian school that was a few miles from our house.

I really liked school. Learning was fun, and my parents always seemed interested in every new fact or skill I picked up each day. I liked going to the chapel to sing songs with everyone, and the playground had swings that went so high, you could jump out of them and fly through the air for a whole minute…or five seconds; my memory on that is a little hazy and distorted by time. We didn’t have uniforms, but we had to wear corduroy pants and collared polo shirts. I didn’t mind, because it was fun to get dressed up for school, and I really liked flipping the collar up and down on the drive there every morning.

I also loved my teacher, Mrs. Gleason. She was about the same age as my parents, had really long blonde hair, always smiled, and wore blue dresses. She was a lot nicer than Mrs. Krocka, a severe woman who was much older, wore her black hair pulled back into a tight bun, and always wore pantsuits. Mrs. Krocka was from Czechoslovakia and spoke with a thick and intimidating accent. As an adult, I wonder now if she was a Soviet Union expatriate, or if maybe her parents fled Europe during or after World War II, but at the time, she was just a mean old lady to me.

Because she taught the second graders, I only had to see Mrs. Krocka once a day, at recess, except for once a month when she taught our music class (which actually wasn’t that bad, because we learned how to sing the songs from chapel in Slovak. I didn’t understand what I was saying, but it sounded cool…sort of like when they had us do the flag pledges).

I left that school after first grade and forgot both of my teachers until H and A told me about Melissa C. You see, I was a really good kid in first grade. I only got the equivalent of my name on the board once. Unfortunately, it was in front of my entire family. Oh, and everyone else’s family, too. It happened during Back to School night. Mrs. Krocka took over for Mrs. Gleason, who was called away at the last minute for some sort of family emergency.

Back to School night was different then from how it was for my kids: Back then, parents brought their kids to school and sat at the back of the class while the teacher took the kids through a truncated version of an average school day for a half an hour or so. When the whole thing was over, the kids got to play on the playground while the parents talked with the teachers, signed up for PTA, and did other mysterious adult things.

I was really excited about Back to School night. I put on my green corduroy pants and wore my favorite blue polo with the skinny orange and brown stripes across the top. I let my mom comb my hair and use Suave hairspray to hold it in place.

In 1978, my brother was almost three years old and my sister was about five months old. For whatever reason, my parents couldn’t or wouldn’t or just didn’t get a sitter, so they brought both of my siblings along to Back to School night. I thought it would be cool for them to see me in my class. I was the big brother, after all.

We arrived a few minutes early (a rarity with my parents, who would show up an hour late for the end of the world) and I was one of the first kids to slide into my desk, right next to my friend Matthew. I thought he was cool because he had a Bible name.

After the rest of the parents and students filled the room, Mrs. Krocka explained that Mrs. Gleason wouldn’t be there, but she’d show the parents what their children did on a usual day.

We started with our pledges to the American and Christian flags, did our daily prayer, and opened our math books. I thought it was really weird that we were doing this stuff at night, and I wondered if the double prayers were such a good idea, but I kept those thoughts to myself. My parents and my little brother were watching, and I wanted to make them all proud of me.