Read The Hunt for the Golden Mole Online

The Hunt for the Golden Mole 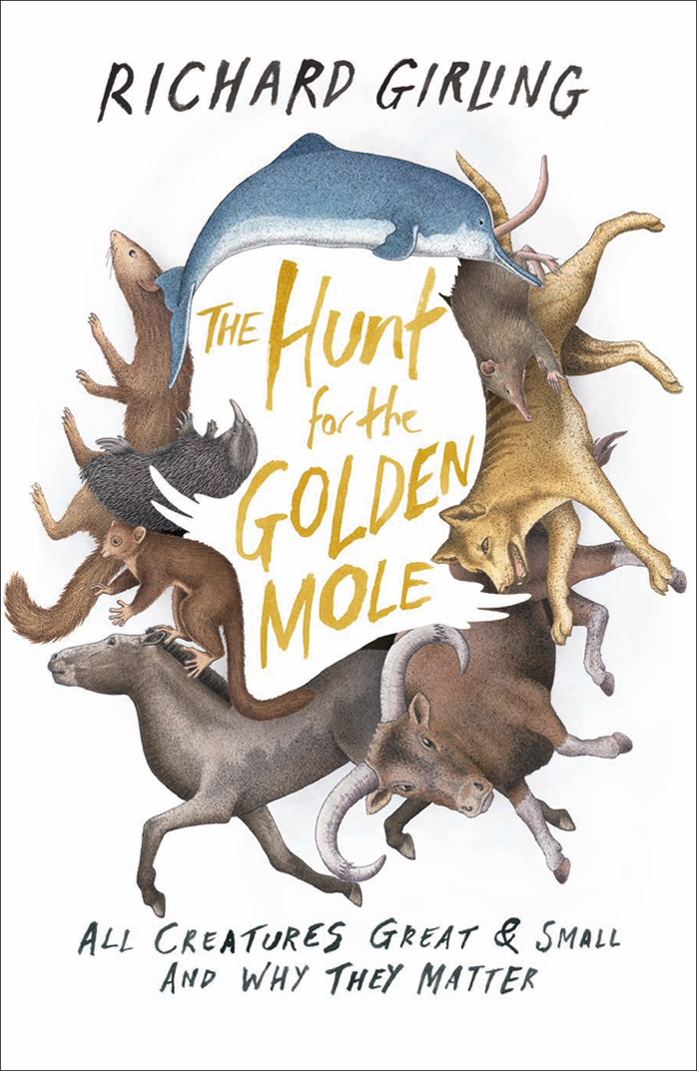 THE HUNT FOR THE GOLDEN MOLE

The View from the Top: A Panoramic Guide to Reading

Rubbish!: Dirt on Our Hands and Crisis Ahead

Greed: Why We Can't Help Ourselves 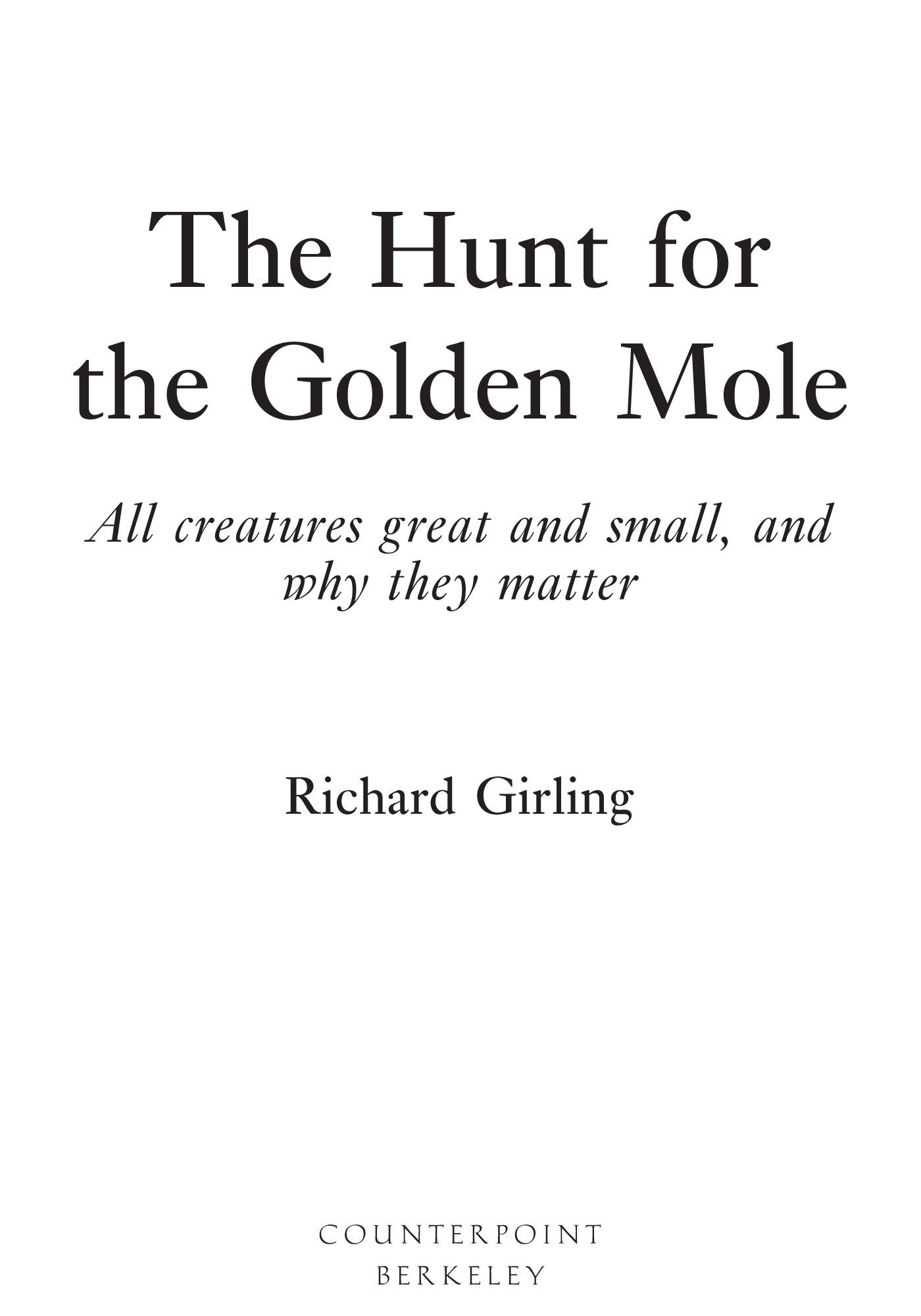 CHAPTER ONE â Dr Storer in the Chair

Dr Storer in the Chair

H
anno the Navigator, the Carthaginian explorer of the fifth century
BC
, also known as King Hanno II, is distinguished by having a crater on the moon named after him. He earned that honour by a feat of seamanship which, 2,500 years ago, established him in the line of pioneers that would lead via Leif Eriksson, Marco Polo, Vasco da Gama, Magellan, Cook, Livingstone, Scott and Amundsen all the way to Armstrong and Aldrin. Like the astronauts, Hanno could report a giant leap for mankind, but, unlike Armstrong's short stride into a cosmic future, his giant leap was backwards.

History over this number of centuries cannot be viewed in high definition. Fragmentary evidence and the agglomeration of myth leave only faint if highly coloured outlines, like lipstick on the rim of time. But what seems likely is that somewhere between 500 and 480
BC
, Hanno set out from the Mediterranean with a fleet of sixty ships which, having passed through the Straits of Gibraltar, made a southward turn into the Atlantic. His mission was to explore and possess as much of north-west Africa as he could lay his hands on. Opinions vary on how far south he got but, in the light of events 2,300 years later, it seems likely that he reached the southern margins of what is now the Gulf of Guinea, and was off the coast of Gabon when he turned for home.

It was somewhere near here that the sailors found an island occupied and fiercely defended by a race of unusually hairy and furiously savage men and women. By Hanno's own account, the men were heavily outnumbered by the women and possessed of a ferocity that surpassed all reason. âWe pursued but could take none of the males; they all escaped to the top of precipices, which they mounted with ease, and threw down stones.' The Navigator was not inclined to sentimentality or squeamishness. âWe took three of the females, but they made such violent struggles, biting and tearing their captors, that we killed them, and stripped off the skins, which we carried to Carthage: being out of provisions we could go no further.'

History now fast-forwards to 1847. An American Protestant missionary, Thomas Staughton Savage, is busy bringing the Bible to West Africa when he meets a group of tribespeople worshipping the upper part of a skull mounted on a pole. But there is more to Savage than holy zeal. Like many churchmen in the nineteenth century, he is an avid amateur naturalist with a devout interest in all Creation. The skull fragment intrigues him. âWith considerable trouble', according to one contemporary, he manages to take possession of it, and the saucer of bone is soon making its way across the ocean to Massachusetts. With it go some other miscellaneous fragments and a paper written by Savage, which will be read on his behalf to the Boston Society of Natural History.

The minutes of the meeting held on 18 August 1847 (âDr Storer, Vice President, in the Chair') record that the discovery was made âin Empongwe, near the river Gaboon, Africa'. Laid out before the learned members are âfour Crania (two male and two female) . . . also the long bones of the extremities, a male and female pelvis, and some other bones'.

Unlike Hanno, the gentlemen are closely familiar with the races of great ape known collectively as Orangs. They know a
chimpanzee when they see one, but they have never reckoned on anything as big as this. The account continues: âThis animal is known to the natives under the name of

ngeena, and is much larger and more ferocious than the ChimpanzÃ©e. Its height is above five feet, but it is remarkable for the disproportionate breadth of the shoulders, which is double that of the ChimpanzÃ©e. The hair is coarse, and black, except in old individuals, when it becomes gray. The head is longer than that of an ordinary man by two inches, and is remarkable for having a crest of coarse hair over the sagittal suture, which meets at right angles a second, extending over the upper part of the occiput, from one ear to the other. The fore-arm is much shorter than the arm, the hand is remarkable for its great size, and the thumbs larger than the fingers. A slight tuft of hair exists at the extremity of the
os coccygis
â no tail, no callosities. Its gait is awkward and shuffling, supporting itself on the feet and fingers, and palms of the hands; but not, like the ChimpanzÃ©e, resting on the knuckles.'

And then we hear the echo, rolling back across the millennia. âThey live in herds, the females exceeding the males in number. Their habitations, like those of the ChimpanzÃ©e, consist of a few sticks and leafy branches, supported by the crotches and limbs of the trees, which afford no shelter, and are occupied only at night. They are exceedingly ferocious, and objects of terror to the natives, who seldom encounter them except on the defensive. The killing of an

ngeena is considered an act of great skill and courage, and brings to the victor signal honor.'

The echo rolls on. âThe Orangs are regarded by the natives as degenerated human beings. The Encheeco, or ChimpanzÃ©e, being less ferocious, and more intelligent, is supposed to have the spirit of a
Coast-man
, but the

ngeena that of a
Bush-man
. Their flesh, when obtained, is eaten by the natives, as well as that of the ChimpanzÃ©e.'