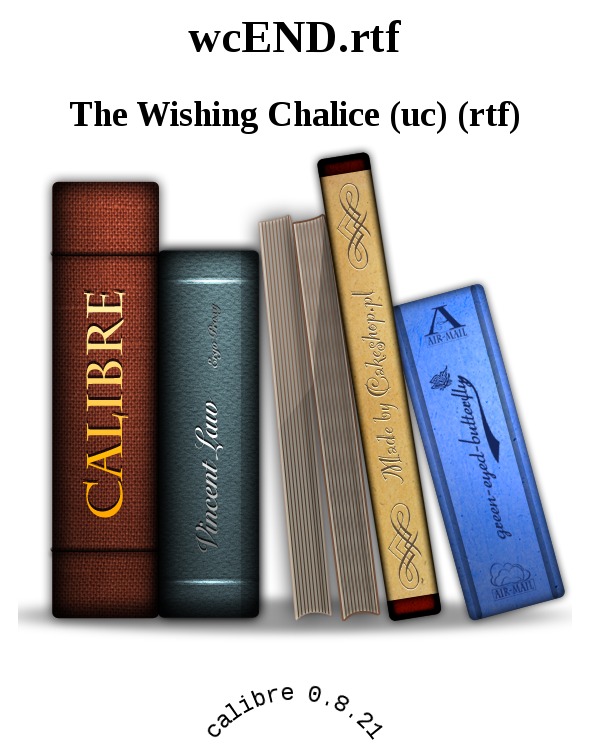 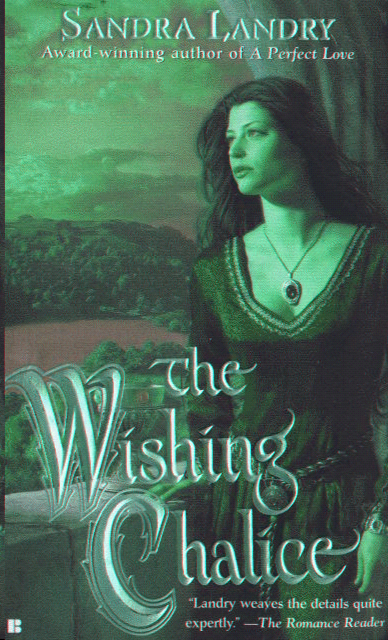 Sandra Landry captured her readers' hearts with her award-winning novel
A Perfect Love,
"a perfect jewel of a book" (Rexanne Becnel). Now, she returns with a tale of love so powerful, it spans the centuries...

Mourning the breakup of her marriage, Isabel retreats to the serene English countryside to find some measure of peace and healing. There she stumbles upon an ancient pewter chalice—and is thrust centuries back in time into the body of another woman. Suddenly she is married to a total stranger—a fierce warrior who looks at his "wife" with undeniable yearning in his eyes...

Hunter had finally achieved his long-desired goal when the king gifted him with Windermere castle—and the hand of its beautiful lady, D
é
tra. But his dream tasted like ashes, for although he was now her lord and husband, Détra despised him and vowed never to love him. But suddenly, Détra seems to have undergone a swift and bewildering change. She claims to have no memory of him, of the circumstances of their marriage and her hatred for him, and forgets even her own name. Now, Hunter has a second chance—to woo his lady wife with kisses, and seduce her with pleasure until nothing or no one can keep him from his heart's desire—no one, perhaps, but Isabel...

Détra grinned at him. She had never grinned at him before. A stunned Hunter rose to his feel and moved to stand before his lady. The uncertain way she looked at him a
n
d around herself corroborated her claimed confusion
.
He looked into her eyes, ey
e
s oddly bereft of scorn for hi
m.
Mayhap the chalice had granted his heart wish, after all. A second chance to begin anew with his lady wif
e
.

He reached for the chalice when she lay a hand on his arm.

"I do not even recall y
o
ur name." she whispered.

Her touch bored holes through his garment, searing his skin and unleashing his desire. He fought against the urge to pull her flush to his body and kiss her lips in full for the first time. And Lord help him! He wanted her to kiss him back as badly. Wanted it with such force he could almost taste her from where he stood.

With the possibility that she could finally fulfill his heart wish
,
his desire for her flourished, becoming fiercer.

He cleared his throat before he spoke. "Hunter is my name."

The
cry of a newbor
n
baby dragged Isabel
fro
m
a
d
eep sleep. Disoriented, she sat up in bed and pushed a strand of hair away from her fac
e.
Heart tumbling, she liste
n
ed for
t
he sound to repeat. It didn't. A
f
ter a moment she realized she'd been drea
m
ing. Again. A dream tha
t
reoc
c
urred with haunting frequency since that day, a year ago, when she
'
d
lost
her baby to a miscarriage.

Isabel fought the longing filling her heart. Not o
n
ly
h
ad
she
lost h
e
r baby b
u
t she'd also learned
s
he would never he a mother.

Maybe it was for the best. Her
marri
age had
f
allen apart
soon
after that
,
and with her
l
ifesty
le
there was
n
o place
in
her l
if
e for a baby anyway. Of course
,
her parents would have disagreed with her. T
h
ey’d had no qualms about dragging Isabel with them all over the world. Not that
she
resented them for that. Being exposed to different cultures and customs
h
ad made her life incredibly rich.

And yet, at times, she had felt quite lonely.

Swinging her legs to the side of the bed, Isabel pushed the old sadness aside. It was dark in the room, and as she reached for the lamp, her hand struck the bedpost. Rubbing her stung fingers, she tried to remember where she wa
s
—
n
ot an easy feat considering she'd been on the road for the past year.

A citizen of two countries, a resident of many more, Isabel had always lived a nomadic life. When her father died, three years ago, her mother had insisted they move from Europe to her native America, maybe in the hopes of recapturing the joy of life that had died with her husband. But after a year of roaming the country aimlessly, Isabel's mother had a
l
so died, leaving her alone at the age of twenty-three.

An ill
-
advised marriage, a miscarriage, and a divorce later, Isabel had left America behind and returned to Europe. At twenty-five, she was a woman with no ties, no family, and no place to call her own, and she liked it
t
hat way. She sold her drawings and paintings at art fairs in various European cities, moving on to a new place once boredom set in, which happened quite often. Thankfully, she was financially solvent and could afford to live as she pleased.

With her eyes finally adjusted to the darkness of the room, Isabel stepped out of bed. Her bare feet touched a soft rug as she fumbled her way to the bedside lamp. The soft light revealed heavy mahogany furniture that spoke of old times, English proper, and well-lived life.

A new sense of loss filled Isabel. She hadn't known her grandmother we
l
l; in fact, she had visited her only a few times. Yet the thought of her grandmother as a safe harbor, a possible anchor to her rootless life, had been a comfort Isabel hadn't realized how much she'd cherished
until it was lost forever. With her grandmother's death, she was
n
ow officially alone, the last of her family.

Chasing the sadness away, Isabel sought the antique wardrobe in one corner of the room. From its perfumed drawers she lifted a T-shirt and a pair of panties. She quickly donned them, covering her naked body before she glided over smooth, hard wooden
f
loors to the bedroom door. Stepping into a softly illuminated corridor, she found her way to the staircase and down into the foyer. She halted for a moment, familiarizing herself with her surroundings, since she'd arrived only the day before, then strolled to the back of the house where the kitchen was located. Once there, she flipped on the light switch and crossed the cold stone floors to peek through the window into the small garden on the back of the house.

A new day was dawning amid dark clouds.

On the kitchen counter she found everything she needed to make te
a
—
t
hanks, no doubt, to her grandmother's housekeeper, whom, it seemed, Isabel had also inherited along with this cozy cottage. As she waited for the water to boil, memories of her father flooded her mind. He had stubbornly clung to the traditional English way of preparing te
a
—
n
o microwave-boiled water and, God forbid, no tea bags for hi
m
—
e
ven though he'd always been ready to learn and adapt to new customs wherever they lived.

Often Isabel wondered about his reasons. Had he been trying to hang on to his English heritage? Or was it a deeper feeling of home, even if home lived only in his memory and heart?

Would she ever know what home was?

AN HOUR LATER, ISABEL IGNORED THE PROMISE OF RA
I
N in the heavily clouded day, slung her backpack over her
shoulders, and left her cottage. The weak morning sun dared occasional peeks from behind gray clouds in a teasing childhood game of
peek-a-boo
as Isabel ambled down the old cobblestone streets.

Even from a distance she could see St. Mary's sandstone spire. As she approached it, its graveyard, where her grandmother was buried, became visible. Stone tombs, shrouded in mist in the overcast day, spread out like a barren crop in front of the neo-Gothic church. Cautiously, Isabel meandered between the ancient and undisturbed tombs, looking for her grandmother's grave. The stones' inscriptions of the Herbert family, dating back to the 1800
s
—
h
er grandmother's being the most recent—
c
ame into sight. These unknown names were all relatives of her father, Isabel realized. Her relatives.

Maybe her father should
'v
e been interred here, she thought. And yet his wishes had been to be cremated and to have his ashes spread on the Thames. Likewise, her mother's ashes now belonged to the Mississippi River.

Where would hers end up?

As she often did, Isabel sought refuge in her art to chase away the sudden loneliness that beset her. Her pencil busily sketched what would later become a painting. As she drew St. Mary's graveyard, she already knew the various nuances of gray she would use to depict the true feelings of the picture. After she finished she looked at the drawing and shivered at the desolation and sadness expressed there, the emptiness of extinguished lives, the relentless constancy of the passing time. No matter the subject, drawing had always had a calming effect on Isabel, and yet today it had stirred deep doubts within her.

Restless, she collected her supplies and took to the road toward Lake Windermere. Walking was another way she calmed herself down, and she knew this area offered wonderful hiking places. She would try them another day.

This morning she would stick to the lakeshore. Concentrating on the rhythm of her breathing and the beating of her heart, Isabel efficiently closed the world out, until serenity took over.

Losing track of time, she plodded on until her lungs were about to burst with the effort. She slowed her pace, catching her breath as she glanced at her wristwatch
,
surprised that a whole hour had already passed. Meanwhile, the wind had picked up speed, and the dark clouds that earlier hovered in the distance now approached menacingly.

Maybe she should turn around.

Directly in her pathway stood a hi
l
l of mud and debris from the recently dredged-out lake
.
Isabel veered inland to avoid the mess when she stepped on something hard. Catching her fa
l
l, she looked down to find part of the offending projectile protruding from the earth. She unearthed it and scooped the object up. It was a heavy chalice, pewter maybe, certainly old. Isabel took it over to the lake and washed the encrusted mud off, revealing three huge blue stones. Could they be real sapphires? They were of a rough cut and rather dull, not at al
l
like real gems. Probably glass.