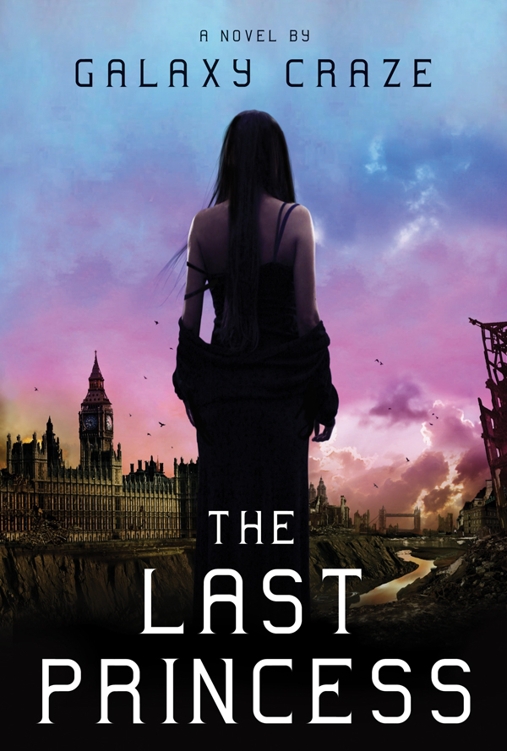 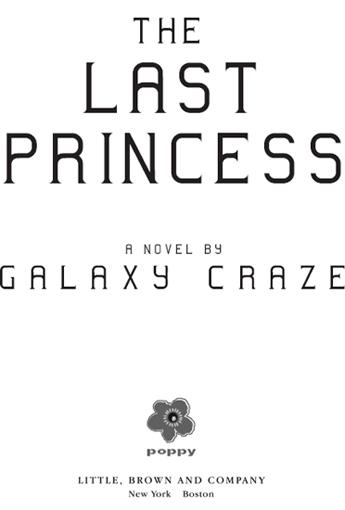 And to my editors, Joelle Hobeika and Cindy Eagan

THE DAY BEGAN AS A BEAUTIFUL AND VIVID DREAM
. It was one of those rare days when the sun was out, and the light was soft and warm, Easter yellow. We were in the garden, just my mother and me; Mary had gone out with our father, but my mother was eight months pregnant and tired, so I had stayed to keep her company.

“
Oh
.” Mother rested her hands on her pregnant belly. We had packed a
picnic, with bamboo mats and a lime-green gingham tablecloth and a few pillows to lie on. “I think your brother wants to join us.”

I was reaching for her belly to feel my brother moving when we heard our butler, Rupert, calling to us. There was a delivery.

Standing at the doorway was a handsome man with
golden-blond curls. In his arms he held a basket of fresh, perfectly ripe fruit: peaches
and plums, apricots and apples, deep red strawberries. I hadn’t tasted fruit since the Seventeen Days.

“Who is it from?” my mother asked, unable to take her eyes from the gift.

The man smiled as he handed over the basket, revealing a row of perfectly white teeth. I remember staring at his teeth, thinking they looked plastic.

“Long live the queen,” he said, and she smiled as he backed out the
door. My mother had always been embarrassed by the expression.

We carried the basket outside to the blanket and sat down in the emerald grass.

Mother reached into the basket and plucked out a perfect-looking peach. She brought it to her nose, closing her eyes as she breathed in its scent.

“Look, there’s a card inside.” I plucked a small white note from the pile of strawberries, and read it
aloud.

To the royal family and the new baby. Enjoy.

I ignored her, distracted by the fruit, wondering what to try first: a plum? A strawberry?

My mother opened her mouth, biting into the peach. A drop of juice rolled down her chin.

“Oh, it’s delicious. It’s the most delicious thing I’ve ever tasted.” As she took another bite, her serene smile turned to
a look of concern. She plucked something off her tongue and placed it on her palm. “But peaches don’t have seeds,” she said.

I leaned forward, looking at her hand; in it lay a tiny metal star.

My mother’s face drained of color as she fell back onto the blanket, her hands clawing at the grass, her fingernails digging into the earth. In the breeze, I heard a rasping sound.

It was my mother’s
last breath.

CAREFULLY, I UNCLASPED THE LOCKET FROM MY NECK, LETTING
the weight of the Welsh gold fall into the palm of my hand. It was the end of August, but it was cool inside the castle’s thick stone walls. Even in summer, a draft wafted through its rooms like a lonely ghost.

I opened the locket and stared at the miniature portrait of my mother, then at my reflection in the window’s leaded glass,
then back again, until my eyes blurred. We had the same dark hair and light blue eyes. Would I grow up to look like her? I closed my eyes, trying to feel her arms around me, hear the low murmur of her voice, smell the rose oil she dabbed on the inside of her wrists every morning. But the
memories weren’t coming back as clearly today. I snapped the locket shut and wiped away my tears.

I could
stare at my reflection all day, but I would never recognize myself. I would never be the girl I was before the Seventeen Days, before my mother was killed. My family had grown hollow inside, like an old tree dead at the roots but still standing. Our hearts were broken.

They never caught Cornelius Hollister, the man who had killed my mother. He haunted my dreams. His blond hair, his intense blue
eyes, his gleaming white teeth followed me down darkened streets while I slept. Sometimes I dreamed I was killing him, stabbing him in the heart over and over again, until I woke up drenched in sweat, my hands clenched in fists. Then I would curl up and weep for what I had lost, and what I had found in myself during those dreams.

Outside Balmoral Castle, a gray veil of rain fell over the barren
landscape. The color of the rain had changed since the Seventeen Days. It was no longer clear and soft like teardrops. This rain was gray, sometimes dark as soot. And it was bitter cold.

I watched the soldiers circling the courtyard, rain beading off their heavy black rain gear. Round, half-empty ammunition belts hung around their necks, carefully protected from
the weather. No cartridge could
be wasted with ammunition so low. Like the bags of flour in the pantry, the jars of oats, the salted snakes and pigeons hanging in the larder—nothing could be wasted. Everything, scarce.

A thick dust swirled through the air, marking the sky like a bruise. Six years ago, everything had changed. For seventeen straight days, the world was battered by earth-splitting quakes, torrential hurricanes,
tornadoes, and tsunamis. Volcanoes erupted, filling the sky with fiery smoke that blocked out the sun and covered the fields with strange purple ash that suffocated crops.

Scientists called it a catastrophic coincidence. Zealots said it was the act of a vengeful God, punishing us for polluting His universe. But I just remembered it as one of the last times I had my mother with me. We spent those
seventeen days in the bomb shelter below Buckingham Palace, along with government aides and palace staff, holding each other tight as the world shattered around us. Only my mother kept calm. She was in constant motion, passing out blankets and canned soup, her soft voice reassuring everyone that it would be okay.

When we finally came to the surface, everything had changed.

I missed the light
the most. The watery early-morning
sunshine, the hot blaze of a summer afternoon, the sparkle of Christmas tree lights, even the soft glow of a naked lightbulb. We emerged from the dark into smoke and ashes, into a world lit by fire.

I felt something cold on my hand and looked down to see my dog, Bella, staring up at me with her large, dark eyes. I had found her with Polly, the groundskeeper’s
daughter and my best friend, shivering under the garden shed when she was just a tiny puppy. We had fed her milk from a doll’s bottle and nursed her back to health.

“Let me guess—you want to go for a walk. Even in this soaking rain?” My voice sounded quiet in the high-ceilinged bedroom.

Bella wagged her tail in excitement, looking up hopefully.

“Okay, in a minute. But I have to finish packing
first, or Mary will nag me to death.”

Bella barked again, as though she understood. My suitcase lay open on the four-poster bed, under the shade of a white eyelet canopy. This was our last day in Scotland. We were taking the train to London this afternoon to make it home in time for the Roses Ball tomorrow. The annual Roses Ball marked the traditional opening of Government Offices and Parliament
after the summer recess, and my father
always made a speech. Even though I hated leaving Scotland, I was ready to see him again. This was the first summer he hadn’t spent at least part of the holiday with us. He kept sending notes with the Carriers, saying that he was busy with the rebuilding projects and would visit as soon as he could, but he never did.

After our mother was killed, my father
had retreated from the world. Once, right after it happened, I found him alone in his office in the middle of the night. Without turning to look at me, he said, “I wish I had eaten the peach. It should have been me. That poison was meant for me.”

I grabbed my hairbrush, my toothbrush, my pajamas, and my book, quickly throwing them into the suitcase. It wasn’t exactly neat, but it would do.

Bella barked impatiently by the door. “I’m hurrying.” I grabbed my raincoat from the hook on the wall, slipped my feet into a pair of bright yellow Wellingtons, and ran into the hallway.

I knocked softly on Jamie’s door but didn’t wait for a response before opening it. Inside, the curtains were drawn; only a hazy line of light crept in to illuminate the dark room. The astringent smell of Jamie’s
medicine hung in the stifling air. A small cup of the deceivingly cheerful cherry-red syrup sat untouched on his bedside table, next to a bowl of oatmeal
and a cold chamomile tea. It was already midday and he hadn’t taken his medicine yet?

My younger brother had barely made it into the world. After our mother was poisoned, the doctors had to force his birth surgically. He survived, but his blood
had been tainted by the mysterious poison. It would be with him, slowly killing him from the inside, for the rest of his life.

Our sister, Mary, had made Jamie stay in his room most of the summer, bundled up against the constant drafty dampness so he wouldn’t risk catching a cold. She had the best intentions, but I knew how depressed he felt, trapped inside. Today was his last chance to be outside
in the fresh air before returning to the smog-filled London streets.

I walked over to where Jamie lay sleeping under the covers. I hated to wake him, especially from what seemed to be a peaceful sleep. The medicine kept him alive but also stole his energy and fogged his thoughts. Worst of all, it gave him terrible nightmares.

I gently turned back the pale blue comforter with pictures of the
planets on it. “Jamie?” I whispered. But the bed was empty.

I was about to turn away when I spotted the corner of his writing pad hidden beneath the pillow. The book where he drew intricate drawings of what he imagined the world
looked like before the Seventeen Days. The animals were far too big, the cars looked like spaceships, and the colors were all off, but Mary and I never had the heart
to tell him. So what if he imagined the world from before as a wonderful, impossible place? It wasn’t as though he would ever get to see it.

I turned the page of the notebook to his most recent entry, and my heart started to beat faster.

Last night I heard two of the housekeepers talking in the kitchen. They said my name and I stopped to listen. I know I shouldn’t eavesdrop. They said how worried my father and sister are about me. How difficult it is to get my medicine now and how expensive and hard to find it is. They could do so much good for the people with the petrol and ammunition they have to trade for it. They said I’m a burden to my family.