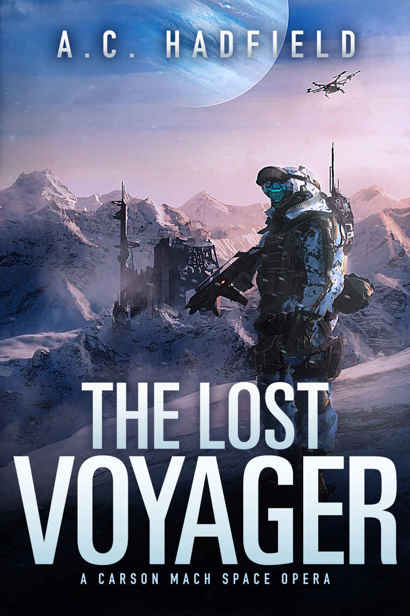 First published in 2015 by A.C. Hadfield

The moral right of the author has been asserted. All characters and events in this publication, other than those

clearly in the public domain, are fictitious and any resemblance to real persons, living or dead, is purely coincidental.

No part of this publication may be reproduced, stored in a retrieval system, or transmitted, in any form or by any means, without the prior permission in writing of the publisher, nor be otherwise circulated in any form of binding or cover other than that in which it is published and without a similar condition including this condition being imposed on the subsequent purchaser.

The battered mining ship rattled and vibrated during its descent through the thin atmosphere of a Noven mining planet. Captain Sereva grimaced as the craft rocked to one side with a violent jolt and wondered what the hell had happened—and what the hell was on the surface. The planet should have been barren, but it was clear to her now that someone, or something, was waiting for them.

The craft’s engines whined in an effort to control their free fall. Sereva had never experienced such an entry as this. Her training had never extended to dealing with landing a mining exploration ship with only emergency thrusters to do the job.

Something had hit them just prior to piercing the atmosphere from low orbit, and they’d come in too fast, she knew that much. The momentum would be difficult to slow the two-hundred-meter-long ship now.

Warning signs flashed across the viewscreen ahead of her. Below her, on the ops deck, her crew worked frantically to divert power to the thrusters and gain some kind of control over their rapid descent.

“Status,” she yelled over the din of the ship’s engines.

Below her, and to the right of the bridge, the chief navigator punched a series of quick commands into his mechanical control desk. No holocontrols in the beat-up
Voyager
. The company couldn’t afford to give better tech to a lowly mining craft.

“We’ve taken damage to the port thruster, sir,” the man said, spinning his chair, a grimace stretched across his thin lips. “Something’s—”

Another booming crash reverberated throughout the bridge. The control center was located at the rear of the ship atop the command tower, giving Captain Sereva a full view of the ship’s bow and the mining crane that was swinging wildly, the entry having cut it loose from the moorings.

The fifty-three-strong crew of mixed humans, lacterns and vestans turned to their captain. A mixture of fear, confusion, and expectation gleamed brightly from their wide eyes.

“I said status!” Sereva yelled. The viewscreen at the front of the bridge only showed the dark of night outside, the Noven sun having dipped beyond the horizon some hours previously. Thick black clouds obscured much of the view beyond. Below them, a dense stygian forest awaited their landing like some spiked tomb. The altimeter clicked down toward their impact.

The navigation officer spun round to face his console before returning to look up at Captain Sereva. “We’ve lost thruster power now,” he said.

“Emergency landing protocols,” Sereva yelled. “Everyone strap in!” She hit a button on the arm of her chair. Throughout the mining craft, sirens wailed, drowning out the thundering noise coming from all around the hull.

“There’s nowhere flat to drop this bird down,” the navigation officer said. “Just forest for thousands of miles all around.”

“The trees it is, then,” Sereva said. She gritted her teeth and cursed her employers. OreCorp had sent her back to the long-abandoned Noven system to deliver a special piece of cargo. Thinking of that made her twinge with guilt. She had deceived her crew, told them they were here on a mining mission, but in truth, it was much more dangerous and important than that.

Noven Alpha hadn’t been mined for nearly a decade since the indigenous independent people went bust and dispersed to various planets within the Salus Sphere. So here was the Noven system, out in deep space on its own, its two planets a memorial of better days passed. How apt, she thought, that this place would be host to the cargo.

“Easy job,” they had said to Sereva. “In and out, drop the cargo, clear the data on Beta, and you’ll be done. No danger, no hassles. Routine.”

“Routine, my ass,” Sereva grumbled as she watched her crew strap in and prepare to crash-land this old tub of a ship. Although it wasn’t exactly nimble, it was built like a vestan Battle Budgie… And yet, something on the surface had blasted them out of the sky and damaged their engines with a single shot.

The planet was supposed to be uninhabited, barren.

“Sir, we’ve detected a massive concentration of magnetic disturbance about two hundred klicks from here.” This came from a vestan woman—the specialist surveyor of the crew.

“That’s all well and good, officer, but let’s wait until we know we’re actually going to survive before scanning the planet. Now strap in. That’s an order!”

The ship started to straighten as the navigator managed to pull the ship’s wide bullnose bow up, the g-force pushing Sereva down into her chair, compressing her guts down within her flight suit.

“Going to have to belly flop it,” the navigator said.

A terrible screeching noise came from beneath them. They had passed through the thick cover of cloud and Sereva saw on the viewscreen the tops of the dark forest rise above the bow. The branches and trunks scraped against the bottom of the ship, making the captain grimace.

She swallowed hard when they slowed and shook even more violently than during entry into the atmosphere. She struggled against the gravity to switch on the three-sixty-degree cameras.

“We’ve lost the radio dish,” a young man in charge of the radio systems said, his voice garbled with the shaking. Sereva prepared to respond when the craft dropped down into a stationary position. They came to a jolting halt, the army of trees finally providing enough resistance to stop them.

Sereva and the crew were thrown forward, their bodies remembering the ghost of momentum even as their ship stopped. The straps around her shoulders bit hard into her muscles, squeezing the air from her lungs.

Three members of the crew on the deck below hadn’t strapped in as they were told. Their bodies rag-dolled forward, crashing together until they struck the metal panel below the viewscreen.

The din had finally ceased.

All Sereva could hear now were the moans and cries of those below and the creaking, settling metal panels that made up the craft. Pings rang out as the heated metal began to cool in the chilly atmosphere outside.

“Screw that,” Sereva said, unbuckling the straps and easing her arms out. Her shoulders flared with pain, making her gasp. “Yelan, can you hear me?” she said, calling out to the navigation officer and her official second in command.

“You heard the man,” Sereva said, hitting the comm button so her voice echoed around the ship. “Health report now. Check in.”

One by one the fifty-three-strong crew checked in, reporting their status. They’d suffered no casualties or serious wounds. Two of the crew who had been flung against the ship’s bow on the deck below reported minor head and muscle injuries. Sereva ordered them to the medical deck for inspection.

The engineering department informed her they’d lost their radio dish, so communications and scanning were out; they’d have to send a distress beacon so OreCorp could recover the ship and the crew.

“That was one hell of a rough landing.”

“The Corp don’t pay me enough for a smooth landing, sir.”

“I’ll bear that in mind during your next appraisal. But seriously, you did good.”

“Thank you, sir. I try my best—given my level of remuneration.”

As bad as the landing was, at least Yelan had provided her with a smile. This helped eased the frustration and anger she felt creeping across her skin. She never wanted to take this mission in the first place. She was supposed to have had a promotion into OreCorp’s executive board, but some internal politics meant she got blackballed and stuck on this old tugboat for a mission that carried consequences far greater than her level of responsibility.

“Engineering, what’s the status of the engines and motors?”

“All offline, sir, for now,” the head mechanic said. “I’m sending a team down to survey the damage now. I’ll have an update for you within the hour.”

“Good job, officer. Let me know the full state of things when you know more. Over.”

Yelan had climbed the steps to the captain’s deck. “Permission to speak honestly, sir.”

“Of course. What is it?” Sereva stood up from her chair and stepped closer to her navigation officer. She had to look down at him, which always seemed to put the men on edge, but not Yelan… he knew there was no difference in height when they were lying down together.

The crew below her were busy ushering the injured through to the rear of the ship, where the medical zone was kept. Others were busying themselves at their consoles, working to figure out where they were and what they could do about the damage.

“So what is it?” Sereva said, stepping closer to Yelan until their bodies almost touched. She reached up a hand, wanting to grip him by the shoulder, but she clenched her fist and dropped her hand back by her side.

Yelan scanned around them and then brought his attention back to her. With a low voice he said, “I saw something on the scanners before we hit the trees.”

“What kind of something?”

“What size are we talking here?”

Yelan took a small step back and leaned over the edge of the captain’s deck before returning to speak in a whisper. “It’s difficult to say exactly, given the speed we were coming in, but if I were to hazard a guess, I’d say at the very least three meters tall… and fast.”

A cold tingle crawled down Sereva’s spine, making the back of her neck buzz. She shrugged it off. “Impossible. OreCorp had the place scanned for life before we arrived. Nothing significant was found. You sure it wasn’t just the movement of the trees?”

The officer shrugged. “It’s possible, I suppose, but I don’t know… the way these things moved… it was as if they were coming toward—”

A sound like small hammers clanging against the hull rang out.
Ting, ting, ting…
There were just a few at first, on the port side, then more from above. The hammering grew louder, more numerous.

The tings turned to clangs. Sereva demanded a sweep of the cameras on the viewscreen, but the ensign informed her that the camera feeds were dead. They had to shout over the banging.

She shared a worried look with Yelan and said, “Seems like you were right. Follow me.” She shouted to the others: “Everyone to battle stations.”

“Weapons are down,” a vestan gunner yelled.

“Then we do this the old-fashioned way. To the armory, grab a rifle. Away team, follow me.” She grabbed Yelan by the shoulder and led him through the bulkhead of the ship. They strode down the corridor toward the armory, the captain telling everyone within earshot they were preparing for a scout mission.

The Mammoth Book of Ghost Stories by Women (Mammoth Books) by Marie O'Regan
Below by Meg McKinlay
SNOW KISSED CHRISTMAS: Sweet Historical Romance Novella--Short Read by Hutchinson, Bobby
The Music Box by T. Davis Bunn
The Blood King Conspiracy (Matt Drake 2) by Leadbeater, David
FlakJacket by Nichols, A
Addictive Rimeshade by Poppet
The Color Of Her Panties by Anthony, Piers
One More Kiss by Kim Amos
The Match of the Century by Cathy Maxwell
Our partner