Read The Most Evil Secret Societies in History Online

The Most Evil Secret Societies in History 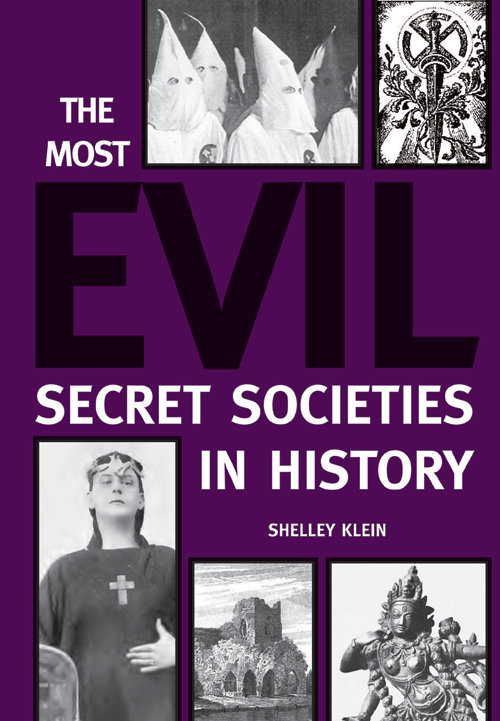 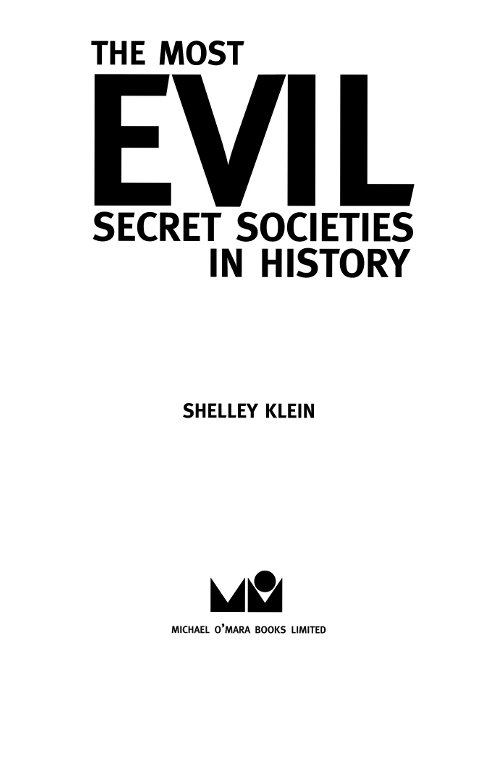 This electronic edition published in 2011

Every reasonable effort has been made to acknowledge all copyright holders. Any errors or omissions that may have occurred are inadvertent, and anyone with any copyright queries is invited to write to the publishers, so that a full acknowledgement may be included in subsequent editions of this work.

All rights reserved. You may not copy, store, distribute, transmit, reproduce or otherwise make available this publication (or any part of it) in any form, or by any means (electronic, digital, optical, mechanical, photocopying, recording or otherwise), without the prior written permission of the publisher. Any person who does any unauthorized act in relation to this publication may be liable to criminal prosecution and civil claims for damages.

Emblem of the Thule Society

Goddess Kali from Indian Myth and Legend by Donald A. Mackenzie, 1913

Medmenham Abbey from an old engraving

Designed and typeset by Design 23

THE ILLUMINATI
–
FOUNDERS
OF
A
NEW
WORLD
ORDER

THE TONG
–
ROMANCING
THE
DRAGON

ORDER OF THE SOLAR TEMPLE
–
TRIAL
BY
FIRE

THE HASHISHIM
–
THE
FIRST
TERRORISTS
IN
HISTORY

THE SOCIALIST PATIENTS COLLECTIVE
–
LUNATICS
IN
CHARGE
OF
THE
ASYLUM

THE THUGS
–
WORSHIPERS
OF
KALI

THE CAMORRA
–
A
SHADOW
OVER
NAPLES

F
or as long as man has been able to communicate with his fellow man, to create social hierarchies and organize mutually beneficial gatherings, he has also, or so it seems, been fascinated by the creation and presence of secret societies. Most of these are (and have always been) harmless organizations, groups of like-minded individuals with a common aim in mind. Men’s dining clubs would fall into this category, or university fraternities, societies that at worst appeal to those interested in the advancement of mildly elitist views or strangely arcane beliefs. Some organizations, however, far from being innocent, instead harbor more sinister agendas, requiring blood oaths, total surrender of one’s personal life or subjugation to a despotic leader. This collection is an attempt to gather a few of these secretive, shadowy groups together – societies that have operated throughout the world in countries as diverse as Japan, America, Kenya, Germany, England, Switzerland and Italy.

Often, when talking of secret societies, it becomes immediately apparent that the organizations under discussion fall into recognizably different categories. So it is with the groups examined here. There is a marked difference between those societies harboring a political agenda (such as the Socialist Patients Collective, the Mau Mau, Odessa and the Hashishim) and those ‘Doomsday’ organizations such as Aum Shinrikyo or the Order of the Solar Temple. Similarly, the Ku Klux Klan, whose main purpose was, and sadly still is, the advancement of highly racist views can, to some extent, be grouped with the Thule Society (with both groups’ belief in a perfect race) while the Tong and the Camorra belong under a general heading of ‘organized crime.’ But what of such groups as the Hell Fire Club? How do they fit into the picture, and under which category do they fall?

In many respects the Hell Fire Club stands out in this collection by being the ‘least’ evil. Formed in the eighteenth century by a group of highly influential men who liked to dabble in politics but whose main purpose in life was pure debauchery, they were, when compared to just about every other secret society in this collection, a relatively harmless group. That said, what the Hell Fire Club illustrated beautifully is man’s seemingly insatiable desire to create an ‘us-versus-them’ scenario by forming a group to which only a small number of chosen individuals can belong. This is clearly a central tenet of any secret society.

Argenteum Astrum – Aleister Crowley’s secretive organization – is another prime example of this. Vaguely distasteful, unashamedly elitist and bordering on the insane, what Argenteum Astrum really signified was the desire of some individuals to be thought of as ‘special,’ set apart from the majority, better than the rest. To satisfy this desire, the more impenetrable a group’s teachings appear, and the more obscure or bizarre the initiation rites, the more attractive the group becomes. This rationale may go some way to explain why cults such as Aum Shinrikyo (whose initiation rituals were bizarre in the extreme) or the Order of the Solar Temple attracted such large numbers of followers. The teachings of these respective groups become a religion to their disciples, a means by which they will ultimately achieve immortality.

The Hashishim were no strangers to this notion, for they were convinced that by carrying out their role as assassin they would be rewarded with the eternal delights of paradise. Certain parallels can be drawn between this ancient cult and present-day suicide bombers although, whereas the former went to great lengths to kill only their desired target and not harm innocent bystanders, the same cannot be said of the modern-day terrorists. The Thugs in India, whose whole cult was built (initially at least) around the idea of achieving eternal glory by sacrificing innocent wayfarers to the goddess Kali, also eventually ceased the religious aspect of their teachings in favor of more self-serving ideals – those of theft for personal gain.

Personal gain becomes something of a recurring theme when studying secret societies, whether it takes the form of enjoying of messiah-like status (as was the case with Aleister Crowley) or whether the cachet is fundamentally monetary, as with Aum Shinrikyo’s leader, Shoku Asahara. The Odessa organization might also fall into this category, having been set up primarily to aid Nazi war criminals after the end of World War II and, although it didn’t operate perhaps quite so ‘romantically’ as the novelist Frederick Forsyth suggests in
The Odessa File
, it was nonetheless a highly successful outfit, and one that enabled several high-ranking Nazi officers to escape the hangman’s noose. There can be few better or more self-serving reasons to form a secret society than self-preservation, but when studying these organizations it quickly becomes apparent that the huge interest in groups such as Odessa exists for quite another reason – that of pandering to our obsession with conspiracy theories. If Odessa existed, after all, surely other secret societies and their evil machinations could yet be influencing world politics?

In this respect there can be no secret society on earth that holds such fascination as the Illuminati. Unknown to most people until the publication of Dan Brown’s novel
Angels and Demons
in 2000, since the book hit the shops the public’s appetite for information on this highly esoteric organization has reached monumental proportions. But why should this be, and what is it about this particular group that has caused such a global reaction?

The answer lies with the fact that Dan Brown is a marvellous weaver of stories and in
Angels and Demons
he has created the type of scenario beloved by so many of us – a small group of people battling against a much larger, incredibly powerful organization, in this case the Catholic Church. This type of ‘David and Goliath’ plot is as old as time itself; indeed it seems fundamental to mankind’s psyche and so perhaps Dan Brown has released an emotional trigger within us all. But more than this, Brown has also tapped into the public’s often deep-seated belief that ‘all is not as it seems’; that, behind the scenes, evil conspiracies are afoot; that the public is constantly being duped, lied to, lulled into a false sense of security and fed anything but the truth. Take, for instance, Hitler’s suicide at the end of World War II or the first landing of man on the moon. Both events have had millions of words written about them asserting that neither episode took place. Hitler, or so many right-wing conspiracy theorists would have us believe, is alive and kicking somewhere in South America – while the first moon landing, according to many people, actually took place in a TV studio after America was forced to abort the real flight due to technical problems. Wild, woolly and way-out conspiracy theories can be found around every corner.

The Illuminati are simply an extension of this idea, for although a sect of that name did exist back in eighteenth-century Bavaria, and although that sect did espouse the overthrowing of established religion in favor of a New World Order, there is absolutely no evidence to suggest that they have reformed or that they have any way succeeded in this plan.

Instead, it is terrorist organizations such as the Socialist Patients Collective (who were sympathetic to a whole raft of other terrorist groups – the Red Army Faction, the American Weather Underground Organization and the Black Panther party, to name but a few,) and those who actively try to change the face of politics in their respective countries that we should be wary of. However idealistic their aims initially may have been, the fact that they resorted to violence in order to make their case heard ultimately negates any positive outcome they might have achieved. Similarly, the Mau Mau, who it could be argued had a legitimate reason for forming a clandestine outfit in opposition to Kenya’s British administration, in taking up arms and slaughtering not only their white ‘masters’ but also vast numbers of their black countrymen lost any semblance of political validity, becoming simply violent criminals.

Similarly, organizations such as the Thule or the Ku Klux Klan, present a far greater threat than the James Bond-type societies hellbent on ruling the world. After all, both the Thule and the KKK were (and, in the case of the latter group, still are) truly insidious organizations whose teachings, without any shadow of doubt, have affected millions of people all over the world.