Read The Other Tree Online

Tags: #The Other Tree 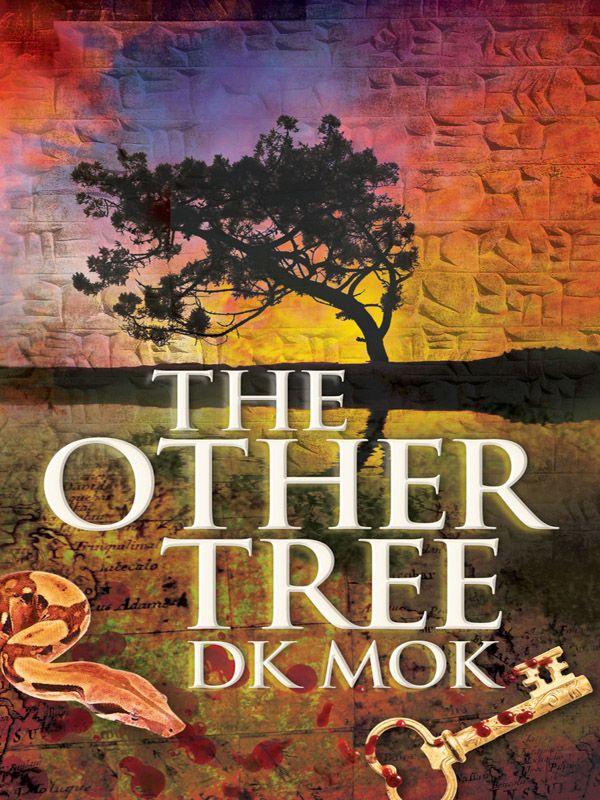 © 2013 D.K. Mok
Sale of the paperback edition of this book without its cover is unauthorized.

This book is a work of fiction. Names, characters, places, and incidents are products of the author’s imagination or are used fictitiously. Any resemblance to actual events, locales, or persons, living or dead, is entirely coincidental.

All rights reserved, including the right to reproduce this book or portions thereof in any form whatsoever. Contact: Spence City, an imprint of Spencer Hill Press, PO Box 247, Contoocook, NH 03229, USA

First Edition: December 2013.
D.K. Mok
The Other Tree: a novel / by D.K. Mok – 1st ed.
p. cm.
Summary:
A grad student and a disillusioned priest race a greedy mega-corporation in a search for the Biblical Tree of Life.

It’s an ancient, almost irresistible drive—
I want to live
. And although the drive rarely goes away, the individual, almost invariably, does. So, scientists struggle to stop telomeres from shortening, they create pluripotent stem cells, and they dabble in the idea that travelling faster than the speed of light may actually reverse time, if you wanted to sit in a tiny, speeding capsule for eternity.

Nearly every culture has its immortality myths—the immortal gods of Greek legend, who then became the immortal gods of Roman legend, in one of the earliest examples of re-branding. But the stories that draw people in, the ones that plant a seed of hope and festering discontent, are the stories about those who
become
immortal: the vampires of Europe, the alchemists brewing the Elixir of Life, the explorers seeking the Fountain of Youth.

Even the more buttoned-up belief systems have a thing or two about human immortality. Go back a thousand years, five thousand, a hundred thousand, before countless generations begat countless more. Before the fire and brimstone, before the burning bushes and pillars of salt.

There was a garden.

Everyone remembers the tree that caused all the trouble—the one that led to the fall from Paradise—and all the subsequent finger-pointing. But sometimes, people forget…

There was another tree.

The Chief Executive Officer of SinaCorp thought often about immortality. Not in a whimsical, wishful, or desperate way. She regarded immortality in the same way that she studied staff turnover figures or scrutinised the practical obstacles to launching a satellite so massive it would draw small moons into helpless orbit. Mortality was indiscriminate. It was
wasteful
.

Marrick stood by the window, banks of scrolling view-screens reflected in the glass. From her executive aerie atop SinaCorp Tower, she could see Varria City sprawled below like découpage. Her expression was thoughtful as a barely visible earpiece streamed threads of news. The plate glass wall of her office sloped outwards, from polished floor to shadowed ceiling. It gave the impression that the room was some kind of observation bay, inspecting the world from on high.

The voice came from a speaker discreetly embedded in the polished, black desk. The table was impressively carved from a single block of exotically flecked stone, its surface covered with faintly disturbing reliefs. It was hard not to draw comparisons with an altar, although such talk was discouraged amongst the staff.

The door slid open noiselessly, and Hoyle walked to his designated mark with the air of someone who lived his life on a flawlessly diligent autopilot. Hoyle looked to be in his late thirties, with an analytical expression and a countenance of dutifully repressed opinion.

“Eden Two have completed their training,” said Hoyle. “When would you like them deployed?”

Marrick didn’t turn from the window.

“Where would you like them to start?” Hoyle’s fingers hovered over a thin, silver pad, the screen glowing softly.

“Sir,” nodded Hoyle, and the doors swished shut behind him.

Marrick watched as the sun set across the city, bathing the office in a dull red light.

This was going to be interesting.

“Outta the way! Watch it! Books on rampage!”

Students threw themselves onto the campus lawn as Chris and an overloaded trolley of books thundered through the main quadrangle. The cheap plastic wheels rattled alarmingly as she skidded the trolley around a kink in the path, spraying gravel onto the philosophy students.

“Sorry!” yelled Chris, her feet dragging helpless furrows behind the hurtling trolley. “Hey, don’t you have a book that’s, like, two weeks overdue? You’re not the only one studying Descar—”

Without warning, the barrelling trolley stopped dead. Chris slammed into the wooden handle, smacking onto the sliding pile of books and making a sound somewhere between a grunt and the noise a corpse would make if you punched it in the lungs.

As Chris unfolded herself, her gaze travelled up a pair of polished shoes, to the kind of suit you would use to advertise bespoke tailoring.
Expensive
bespoke tailoring. A man stood in the middle of the path, his hands gripping the front of the now-stationary trolley. Chris had the feeling that underneath the suit was a figure that could also advertise personal training services.
Expensive
personal training services.

The man pushed up a pair of wire-rimmed glasses, which Chris had the uneasy feeling he didn’t actually need.

“Sorry,” said the stranger. “I didn’t know if you were in distress, but everyone else seemed to be.”

“It’s all right,” wheezed Chris. She took a tentative breath, and her lungs reluctantly inflated. “We’ve asked the university to level that slope, but they say it’s heritage.”

Which was another way of saying they couldn’t afford it. There was an awful lot at the university which was “heritage.”

“I am. Thanks.” Chris tugged the trolley firmly.

There was a slightly unpleasant pause, and then he released the cart. He dropped his gaze briefly to the covered shelf beneath the cart before flicking Chris a smile.

Chris resisted the urge to adjust the canvas draped over the trolley shelf, watching him stroll away.

This was not the most unusual encounter Chris had experienced at the university, particularly since it involved neither togas, swarms of lemurs, nor large, rolling cheeses being chased by tearfully hysterical students. However, as Chris wheeled the trolley towards the central square, she couldn’t help feeling that something slightly peculiar had just happened.

Varria University certainly wasn’t a bad university. However, if it were a couch, it would be stained with age, leaking a little stuffing (but devotedly re-patched), and defensively described as “vintage” by the owners.

Chris acknowledged that it was only due to these institutional eccentricities that she had a job here, but on days like today it could be both infuriating and disheartening.

She passed beneath the sandstone archway and into the sporadically grassy central square. Technically, it was an irregular hexagon, since the university had sold a chunk of land to car-park developers; nonetheless, it was still affectionately known as The Square, with the great uprooted oak still lying on its side from the storm of ’84. A permanent line of jittery students snaked behind the red and white coffee cart in one corner, while anxious academics peered at the weatherworn notice boards lining the western wall.

There was an excited huddle of people around the notice boards now, dressed in an eclectic assortment of cardigans, lab coats, and clothes that would perhaps one day come back into fashion. Chris pushed the trolley resolutely in their direction, resisting the urge to speed up and let go. She had been told it was for reasons of tradition that notices were still posted in The Square, rather than discreetly placed on the university website, or even more discreetly messaged on a “need to know” basis. Chris suspected it had more to do with principles of bread, circuses, and academic bloodsport.

Looks flicked in Chris’s direction as she approached; some were gloating smiles and others were smirks of schadenfreude. They parted in a disorganised shuffle as she advanced.

The boards were of golden walnut, the corners rounded by decades of wind, rain, and the occasional Frisbee. Panels of glass were set into the front, covering a pitted corkboard pinned with News of Importance.

A finely printed list rolled down the page, stating names, monetary amounts, and topics of research. Her eyes scanned the list, up and down and up again. She searched the corners of the page, squinting at the paper from an angle, in case they had tried to print without toner again.

“What on earth is a trolley of disorganised books doing here? Oh, Arlin. What a surprise.”

Ogden didn’t look surprised. In fact, he looked like he’d been standing by the notice boards all day, waiting for Chris to show up. Another hour and he’d probably have sunstroke.

The other academics drew back. Scientists liked to throw words at each other, but occasionally they threw punches. And there were some very heavy books on that trolley.

Chris couldn’t believe that Ogden had won the Ellipso Rarities Grant again. Reading his proposal online, she had been certain that entire paragraphs had been plagiarised from Star Trek, and possibly Blake’s 7.

It was true that Ogden could have been a brilliant scientist. He had, however, made the discovery early in his career that if you threw the word “quantum” around with enough frequency, combined creatively with phrases like “negative space” and “imploding neutron antechinuses,” people would give you quantities of money and leave you alone.

“I had no idea the library had a delivery service now,” said Ogden. “Wait, don’t tell me you’re here for the notice board?”

Ogden did not do pantomime well. He was the kind of person who started laughing at the punchline before he finished telling the joke. If he was laughing, everyone else should just assume it was funny.

Just walk away
, Chris told herself.

It was always undignified when academics got into a scuffle—lots of hair-pulling and broken spectacles. Chris grabbed the handle of the trolley and turned away.

“After all, these are the grants for scientific research, not the creative arts,” continued Ogden.

There was a chorus of uncertain snickers.

Chris stopped, her heel grinding sharply in the gravel as she turned to face Ogden.

Chris fixed Ogden with a look of disdain.

“Yet I’m the one with the grant,” said Ogden.

The trolley felt much heavier when being pushed uphill, and Chris tried to tell herself that the crushing weight was gravity, rather than disappointment. She had been working at Varria University for four years now, since graduation. She was far too old to be shelving books and substitute teaching. Then again, it wasn’t age that was the problem. She was far too
ambitious
to be shelving books and substitute teaching.

There were
things
she wanted to do, discoveries to be made, questions to be answered, revelations to share with the world. However, Ogden was right about one thing—she would be stuck in application hell forever unless something dramatic happened.