Read The People in the Castle: Selected Strange Stories Online

The People in the Castle: Selected Strange Stories 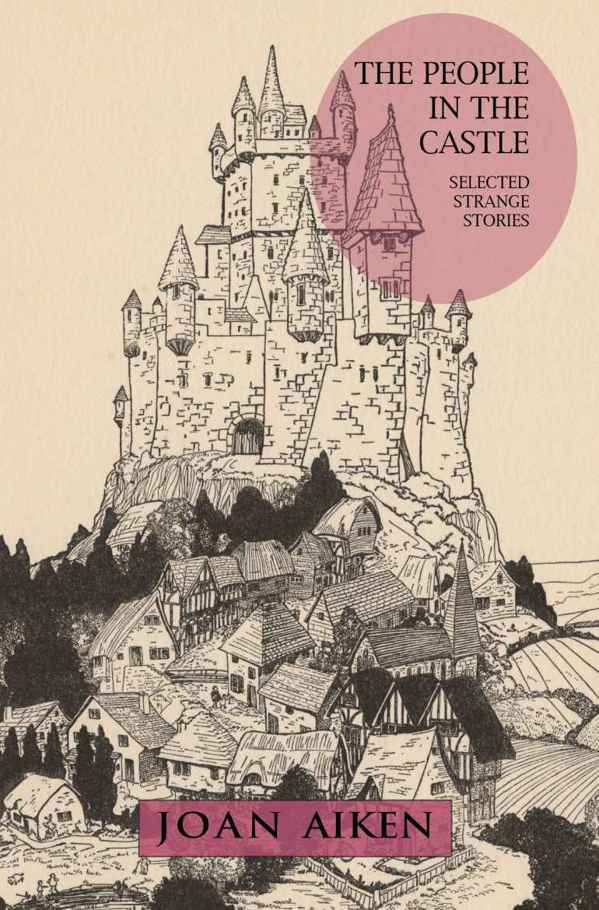 A Leg Full of Rubies

A Room Full of Leaves

She Was Afraid of Upstairs

Some Music for the Wicked Countess

Sonata for Harp and Bicycle

The Dark Streets of Kimball’s Green

The Man Who Had Seen the Rope Trick

The People in the Castle

All You’ve Ever Wanted

More Than You Bargained For

A Necklace of Raindrops

A Small Pinch of Weather

A Harp of Fishbones

Not What You Expected

A Bundle of Nerves

A Touch of Chill

A Whisper in the Night

Up the Chimney Down

A Goose on Your Grave

A Foot in the Grave

Give Yourself a Fright

A Fit of Shivers

A Handful of Gold

This is a work of fiction. All characters and events portrayed in this book are either fictitious or used fictitiously.

The People in the Castle: Selected Strange Stories
copyright © 2016 by Elizabeth Delano Charlaff

(joanaiken.com). All rights reserved. Page 254 of the print edition is an extension of the copyright page.

Distributed to the trade by Consortium.

Cover art “The Castle in the Air” by Joan Aikman, 1939. © Blue Lantern Studio/Corbis.

In 1924, Joan Aiken was born in a haunted house on Mermaid Street in Rye, England. Her father was the poet Conrad Aiken, perhaps most famous now for his short story “Silent Snow, Secret Snow” and her mother was Jessie MacDonald, who homeschooled Joan and filled her earliest years with
Pinocchio,
the Brontës, and the stories of Walter de la Mare, and much more. (Her stepfather Martin Armstrong was, as well, a poet; Joan Aiken’s sister and brother, Jane Aiken Hodge and John Aiken, like Joan, became writers.) Aiken wrote her first novel at the age of sixteen (more about that later) and sold her first story to the BBC around the same time. In the fifties and sixties, she worked on the short story magazine
Argosy
and from 1964 on, she wrote two books a year or more, roughly one hundred in all. She wrote gothics, mysteries, children’s novels, Jane Austen pastiches, and an excellent book for would-be authors,
The Way to Write for Children.
Her first book was the collection
All You’ve Ever Wanted and Other Stories,
followed by a second book of short stories
More Than You Bargained For
—stories from these collections were published in a kind of omnibus in the U.S.,
Not What You Expected,
which was the first book by Aiken that I ever read. Her series of alternate history novels for children, a Dickensian sequence that starts with
The Wolves of Willoughby Chase,
has stayed in print, I believe, almost continuously since she began writing it, although I still remember being told by her agent, Charles Schlessiger, that when he delivered
The Wolves of Willoughby Chase
to her publisher, her editor asked if Aiken would consider sending them another collection instead. (Well: the world is a different place now.) The “Wolves” sequence is bursting to the seams with exiled royalty, sinister governesses, spies, a goose boy, and plucky orphans—and, of course, the eponymous wolves.
The Telegraph
said of Aiken that “her prose style drew heavily on fairy tales and oral traditions in which plots are fast-moving and horror is matter-of-fact but never grotesque.”

Many many years ago, I had a part-time job at a children’s bookstore, which mostly—and happily—entailed reading the stock that we carried so we could make recommendations to adults who came in looking to buy books for their children. (Our customers were almost never children.) I reread the still ongoing “Wolves” novels and then began to track down the Aiken collections that I had checked out of the Coral Gables library to read as a child—collections whose titles still enticed:
The Far Forests, The Faithless Lollybird, A Harp of Fishbones.
When, eventually, I moved to Boston, I got a job at another bookstore, this one a secondhand shop on Newbury Street—in part so that I had a firsthand shot at hunting down out-of-print books for myself. I can still remember the moment at which, standing at the top of a platform ladder on wheels to reach the uppermost shelf to find something for a customer, I found Joan Aiken’s first novel
The Kingdom and the Cave
as if it had only just appeared there (which it probably had. The Avenue Victor Hugo Bookshop’s owner, Vincent McCaffrey, bought dozens of books each day).

And now, of course, it’s quite possible to find almost any book that you might want online. (The world is a different place now.)

I recently spent a long weekend in Key West at a literary festival where the organizing theme was short stories. How delightful for me! There was much discussion on panels of the challenges that short stories present to their readers. The general feeling was that short stories could be difficult because their subject matter was so often grim; tragic. A novel you had time to settle into—novels wanted you to like them, it was agreed, whereas short stories were like Tuesday’s child, full of woe, and required a certain kind of moral fortitude to properly digest. And yet it has always seemed to me that short stories have a kind of wild delight to them even when their subject is grim. They come at you in a rush and spin you about in an unsettling way and then go rushing off again. There is a kind of joy in the speed and compression necessary to make something very large happen in a small space. In contemporary short fiction, sometimes it’s the language of the story that transmits the live-wire shock. Sometimes the structure of the story itself—the container—the way it unfolds—is the thing that startles or energizes or joyfully dislodges the reader. But: it does sometimes seem to me that for maybe the last quarter of the previous century, the subject matter of literary short fiction was somewhat sedate: marriage, affairs, the loss of love, personal tragedies, moments of self-realization. The weird and the gothic and the fanciful mostly existed in pockets of genre (science fiction, fantasy, horror, mystery, children’s literature) as if literature were a series of walled gardens and not all the same forest. We had almost nothing in the vein of Joan Aiken’s short stories, which practically spill over with mythological creatures and strange incident and mordant humor. And yet at the time when she began to write them, in the 1950s, when Aiken was an editor at
Argosy
as well as a featured author, there were any number of popular fiction magazines publishing writers like John Collier, O’Henry, Elizabeth Bowen, Sylvia Townsend Warner, Ray Bradbury, Roald Dahl. Magazines have smaller circulations now; there are fewer magazines with circulations quite so broad; and yet there are, once again, many established and critically acclaimed—as well as new and startlingly brilliant—writers working in the fantastic mode. The jolt that this kind of writing gives its reader is the pleasure of the unreal in the real; the joyful, collaborative effort that imagining an impossible thing requires of such a story’s reader as well as its writer. It seems the right moment to introduce the stories of Joan Aiken to a new audience.

The particular joys of a Joan Aiken story have always been her capacity for this kind of brisk invention; her ear for dialect; her characters and their idiosyncrasies. Among the stories collected in this omnibus, are some of the very first Joan Aiken stories that I ever fell in love with, starting with the title story “The People in the Castle,” which is a variation on the classic tales of fairy wives. “The Cold Flame” is a ghost story as is, I suppose, “Humblepuppy,” but one involves a volcano, a poet, and a magic-wielding, rather Freudian mother—while the other is likely to make some readers cry. In order to put together this omnibus, we went through every single one of Aiken’s collections, talked over our choices with her daughter Lizza, reworked the table of contents, and then I sat down and over the course of six months, typed out every single one. I’m sorry that we couldn’t include more—for example, two childhood favorites, “More Than You Bargained For” and “A Harp of Fishbones,” but there was a great pleasure in reading and then rereading and then transcribing stories like “Hope” in which a harp teacher goes down the wrong alley and encounters the devil. And “A Leg Full of Rubies” may be, in its wealth of invention, the quintessential Joan Aiken short story: a man named Theseus O’Brien comes into a small town with an owl on his shoulder, and unwillingly inherits a veterinary practice, a collection of caged birds including a malignant phoenix, and a prosthetic leg full of rubies which is being used to hold up the corner of a table. Joan Aiken is the heir of writers like Saki, Guy de Maupassant and all the masters of the ghost story—M. R. James, E. F. Benson, Marjorie Bowen—I can’t help but imagine that some readers will encounter these stories and come away with the desire to write stories as wild and astonishing and fertile as these.

In 2002, the International Conference on the Fantastic in the Arts invited Joan Aiken to be its guest. I went in order to hear her speak. She was so small that when it was time for her to give her lecture, she could not be seen over the podium—and so finally someone went and found a phone book and she stood on that. She talked about how her stepfather, Martin Armstrong, had been impatient in the morning at the breakfast table when the children wanted to tell their dreams. Other people’s dreams are, he said, boring. And then Joan Aiken proceeded, in her lecture, to tell the audience about a city that she visited in a series of recurring dreams. She said that it was not a city that existed in the real world, but that after walking its streets for so many years in dreams, she knew it as well as she knew London or New York. In this city, she said, was everyone she had ever loved, both the living and the dead. We all listened, riveted. Did she talk about anything else? I don’t remember. All I recall is her dream and the telephone book.

FromNowOn by Eliza Lloyd
A Bride for Christmas (Sweet Regency Novella) by Fish, Aileen
The Wormwood Code by Douglas Lindsay
Desire Unleashed by Layne Macadam
A Chance at Love by Beverly Jenkins
Eidolon by Grace Draven
Burned (Keeper of the Flame) by Ivy Simone
Vacation by Deb Olin Unferth
Severin's Journey Into the Dark by PAUL LEPPIN
Resisting the Musician (a Head Over Heels Novel) (Entangled Indulgence) by Ally Blake
Our partner