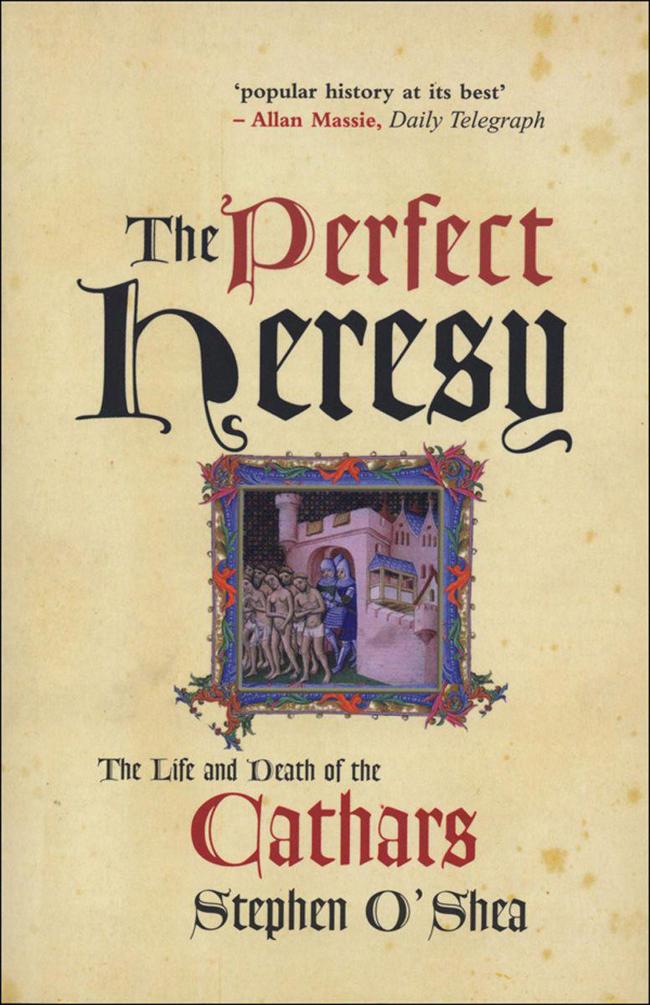 ‘Stephen O’Shea certainly knows how to tall a story, and he has chosen a rousing tale to tell. Cruelty, loyalty, heroism, fanaticism and cynicism on an epic scale are its lifeblood … It is a story populated by knights and troubadours, saints and heretics, princes and the great anonymous crowds who suffered … Stephen O’Shea brings this lost world of the thirteenth and early fourteenth centuries alive with stunning vividness.’

‘After nearly eight centuries, the memory — one might almost say the spirit — of the Cathars lives on in the land in which they lived, suffered and died. To anyone visiting the region for the first time, this book will be the ideal introduction to their story.’

‘
The Perfect Heresy
is the fascinating story of an unorthodox movement in the south of France from the twelfth to the fourteenth century. After its flowering, its ideas were destroyed in Languedoc by a crusade led by the king of France and the barons from the north of the country; the last remnants of Catharism came together in the village of Montaillou, in the Pyrenees, at the dawn of the fourteenth century. Stephen O’Shea’s book is the work of a connoisseur of Languedoc, is written for a wide readership, and draws on his personal experience of France’s southern region.’

‘Apart from a racy, vivid account of the Crusade and the events that followed, he offers an intelligent analysis of the heresy and the conflicting theories surrounding it … All the way O’Shea shows deep knowledge and love of the region. He writes with enthusiasm and immediacy of a contemporary chronicler … The book is unputdownable.’

‘A very well-informed and highly readable account of one of the great religous and social crises of the Middle Ages. The Cathars have found in Stephen O’Shea a persuasive and passionate chronicler. This is a book to enjoy and ponder.’

Stephen O’Shea is a Canadian writer and historian. He has lived for long periods in Paris and New York, and moved to southern France to research and write
The Perfect Heresy
. His first book,
Back to the Front: an accidental historian walks the trenches of World War I
, was published to great acclaim and his latest book,
Sea of Faith
is a magnificent narrative of the contacts and conflicts between Islam and Christianity in the Mediterranean world over a thousand years. He now lives in Providence, Rhode Island.

The Revolutionary Life and Death of
the Medieval Cathars

This edition published in 2001

First published in the United States of America in 2000 by Walker Publishing Company, Inc

Printed in the UK by CPI Bookmarque, Croydon, CR0 4TD

All rights reserved. Without limiting the rights under copyright reserved above, no part of this publication may be reproduced, stored or introduced into a retrieval system, or transmitted, in any form or by any means (electronic, mechanical, photocopying, recording or otherwise), without the prior written permission of both the copyright owner and the publisher of this book.

To
Jill, Rachel, and Eve

PRINCIPAL FIGURES IN THE CATHAR STORY

1. Languedoc and the Great Heresy

3. The Turn of the Century

13. The Return to Tolerance

17. The Synagogue of Satan

18. Twilight in the Garden of Evil

Principal Figures in the
Cathar Story

Arnold Amaury
(d. 1225): Head of the Cistercian order of monks. Papal plenipotentiary in Languedoc, he was later appointed archbishop of Narbonne. Arnold led the Albigensian Crusade at the infamous sack of Béziers in 1209.

Peter Autier
(c. 1245–1309): Cathar holy man. Until middle age a wealthy notary in the mountain town of Ax-les-Thermes, Autier received heretical religious instruction in Italy and returned to Languedoc to spread the faith.

William Bélibaste
(d. 1321): The last Languedoc Perfect. Sought by the authorities on charges of heresy and murder, Bélibaste exercised his ministry for over a decade among fellow exiles in Catalonia.

Bernard of Clairvaux
(1090–1153): Cistercian monk, founder of the abbey of Clairvaux in Champagne in 1115, canonized in 1174. Bernard advised popes, preached the Second Crusade, and sounded the alarm about the growth of Catharism.

Blanche of Laurac
: The greatest matriarch of Languedoc Catharism. Two of her daughters made prominent marriages, then became Perfect; another ran a Cathar home in Laurac. Blanche’s fourth daughter and only son were murdered at Lavaur in 1211.

Domingo de Guzmán
(1170–1221): Founder of the Order of Friars Preachers, or Dominicans, canonized as St. Dominic in 1234. A native of Castile, Dominic preached tirelessly in Languedoc in the years preceding the crusade. During the Cathar wars he became a confidant of Simon de Montfort.

Esclarmonde of Foix
: Sister of Raymond Roger, the count of Foix. Esclarmonde embraced Catharism in 1204 at a ceremony attended by Languedoc’s leading families. She ran a heretical convent and, centuries later, became the object of an eroticohistorical cult.

Fulk of Marseilles
(1155–1231): Bishop of Toulouse from 1205 until his death. Immortalized by Dante in canto IX of the
Paradiso
, Fulk showed uncommon eloquence and ruthlessness in combating Catharism.

Gregory IX
(1170–1241): Ugolino dei Conti di Segni, elected pope in 1227. His appointment, in 1233, of the Dominicans to lead the fight against heresy is usually cited as the founding act of the Inquisition.

Guilhabert of Castres
(d. c. 1240): The greatest of the male Languedoc Perfect. Although in constant danger as the Cathar
bishop of Toulouse, Guilhabert eluded capture and organized the strategic retreat of the faith into the Pyrenees.

Innocent III
(1160–1216): Lotario dei Conti di Segni, elected pope in 1198. He launched the Albigensian Crusade in 1208 and convoked the Fourth Lateran Council in 1215. One of the most feared and admired medieval pontiffs, Innocent died in Perugia en route to brokering a peace between Genoa and Pisa.

Peter of Castelnau
(d. 1208): Cistercian monk and papal legate whose demise prompted the call to crush the Cathars.

Amaury de Montfort
(1192–1241): Eldest son of Alice of Montmorency and Simon de Montfort. Embattled lord of Languedoc from 1218 until the cession of his rights to King Louis VIII of France. Captured by the Muslims at Gaza in 1239, held captive in Babylon for two years, Amaury died in Calabria on his homeward journey.

Blanche of Castile
(1185–1252): Queen of France, then regent after the death of Louis VIII and during the minority of her eldest son, Louis IX (St. Louis), as well as during his extended crusading absences in Palestine. Arguably, France’s greatest thirteenth-century ruler.

Selected Tales (Oxford World's Classics) by Poe, Edgar Allan
Knight-in-Arms - Demons: (BWWM Interracial Paranormal Billionaire Shifter Romance Part Three) by Athena Dore
After Dark (The Vampire Next Door Book 2) by Titus, Rose
Between My Father and the King by Janet Frame
The Sans Pareil Mystery (The Detective Lavender Mysteries Book 2) by Karen Charlton
No Way Back: A Novel by Andrew Gross
Smoke by Kaye George
Abigail: Through the Looking Glass by Rachel Elliot
The Carnival Trilogy by Wilson Harris
Eden's Creatures by Valerie Zambito
Our partner