Read The Road to Reckoning Online

The Road to Reckoning 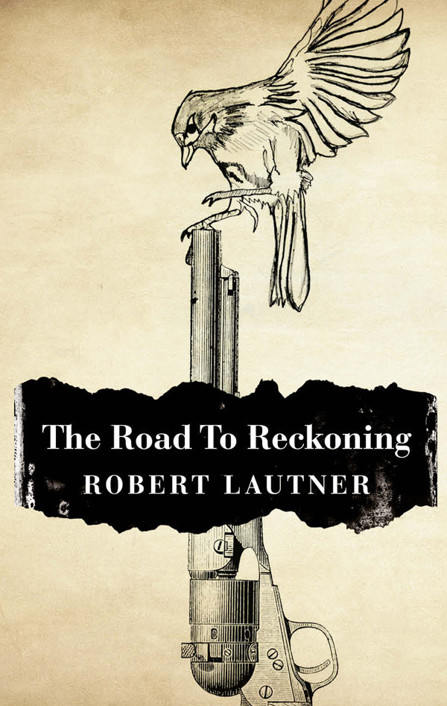 The Lord made men.

But Sam Colt made them equal.

When I first met Henry Stands I imagined he was a man of few friends. When I last knew of him I was sure he had even fewer.

But, it could be said, just as true, that he had fewer enemies because of it.

And as I get older I can see the wisdom of that.

I was twelve when my life began, mistaken in the belief that it had ended when the pock claimed my mother. She had survived the great fire of New York in ’35 that we all thought might have quelled the pock.

In 1837 my father was a quiet man in a noisy world. At twelve I was not sure if he had been a quiet man before my mother had gone. I can remember all my wooden-wheeled toys, the tiny things for tiny hands that I cherished, but not the temperament of my father before the Lord took Jane Walker. The quietness is more important than that he was a salesman for spectacles, still quite widely known as ‘spectaculars’ by some of the silver-haired ladies we called upon.

Half the time as a salesman he would just be leaving his card with the maid and the other half would be following up on the business that the card had brought.

That was his day and for some of the week it would be mine also.

It was a slow business and an honest one. Slow for a boy. The closest it ever got to an element of shrewdness was when my father would tell me beforehand to sip slow the glass of milk or lemonade that I was always offered. Sip slow in order to postpone the moment when the lady of the house would be confident in her judgment that she could not afford a new pair of spectaculars today and politely asked my father to leave.

I did not mind to drink slow so much when it was milk or, worse, buttermilk, but the lemonade was hard to draw slow when I had been walking all day. And today if a lemonade comes my way when it is offered I still sip it like it is poison when all I want to do is swim in it.

All of that was in the city of New York, where I was born, and I had no notion of what the rest of the country was like. I also had little idea of what other children were like, being homeschooled by my aunt on my mother’s side and mostly staring out our parlor window at other boys pinwheeling down the street.

I was intimidated by their screams and backed away from the panes as people do now from tigers in the zoological. We had no zoological then but no want of beasts.

I now know this sound of children to have been their unfettered laughter, having had boys of my own once. At the time I thought they were savages, as dangerous as the Indians I imagined hid out on the edges of the roads waiting to snatch me if I did not keep an eye out for them and a piece of chalk to mark behind me, which every boy knew they could not cross.

I am pretty sure it was April when my father had his idea. I remember the crisp blue sky and I know I was still only a part of the way through my Christmas books that I was allowed to read for pleasure on Fridays, and so those weeks would pan out to make it April.

One of them books was about a boy on a ship in the wars against Napoleon, for it rubs at my memory, and the other was set hundreds of years in the future, when the world would be better. I liked that one. It was written by a woman, I remember that, and I imagined that my mother would have liked it. It had a utopian view of our country and my mother was always looking for the best in everything.

I am sorry that I can remember little more about them books but my memory of that time is clouded when it comes to the pleasing and too much of it burned black onto me with the other.

My father had gotten word of a new invention, the chance of a new venture that needed no capital, and I had never seen him so animated. I did not know, as a child, that the whole land was in depression and in New York in particular businesses and people’s homes were crumbling under the weight of paper. I had seen protesters in the park, the placards, and heard the cry. The same as it ever is.

When I think back it would seem that in just a few years, what with the pock and the fire, the banks closing and the gangs, that New York had gone to the Devil. But I was a boy and my belly was full and my aunt had reminded me that there had been some insurance on my mother’s life that would see me well but for the fact that I was drawing into it every time I scraped too much butter, which was her curse of me.

I suppose we were also caught in this financial bust, which would cause my father to take to the road, and I also presume that as a businessman my father paid attention to patents and newspapers. But he shared none of this with me. What I have to tell you now is that in April 1837 we traveled to Paterson, New Jersey, in our gig, my father almost jumping all the way and my books and my aunt Mary left behind.

My aunt was not happy about my going on the road, although I regularly traveled with my father around New York, probably more as a sympathy for his sales than for my companionship, which was mute at best, but I gathered from their talk that we would not come home for supper this time.

‘You cannot take him, John!’ She said this as a fact rather than a plea for my safety. ‘You’ll be gone for months! And what for his schooling?’ This was a good reason for me to run. My aunt had wishes to end my homeschooling. She had subscribed to the
Common School Assistant
, and along with the
Christian Spectator
and
Cobb’s Explanatory Arithmetick
this had become her higher learning.

She had become enamored of a new model of teaching from Europe. A studious Swiss named Fellenberg had developed an institutional method that mingled poor and wealthy children. His concept being that the poor in society would be taught the trades and education needed for their place, and the rich would be taught the arts, literature, and politics of their standing. By seeing the poor at their work the rich children would appreciate their contribution to the country, and by observing their betters side by side and seeing them learn how to be leaders and intellectuals the poor would understand the way of things and appreciate that their aspirations were taken care of. I figured I was for the better half of the school and if that mister Fellenberg thought poor children were apt to admire their betters he had never seen the Bowery, and I for one would have none of that.

‘What is a boy to do out in the west?’ she insisted.

This statement was lost on me. Even at twelve I knew that I would have no limit of things to do out beyond the mountains. My own thoughts of danger were less important than having the opportunity to be away from my aunt’s lavender chiffon and her yardstick rule, which I never saw measure anything except how much blame my knuckles could take. Besides, we were talking only as far as Illinois and Indiana in those days. I am sure my father had no intention of entering the wilds of Missouri.

‘Tom is coming,’ my father said. ‘I cannot leave him here. I will need him.’

Against tradition I was not named for my father. We were a book-reading family and he had named me after the Tom in a Washington Irving tale published the year before I was born. It had the Devil in it.

He looked on me with the same strained face that I had awoken to on that winter morning when my mother passed.

He had sat at the end of my bed that dawn, wringing his hands, rocking like a just and sober man down to his last coin with the landlord at the door and plucking at his fingers to count where he had gone wrong.

‘I cannot.’ He gave the look to me but spoke to my aunt. ‘I will not leave him.’

He packed us on that little four-seat Brewster bought from Broad street the year before the fire, in the months when my mother began to look better.

No room for books or toys. And I never noticed that I left these things. My heart was already on the road.

Our house was near the river in Manhattan and we took a ferry from Pier 18 to Jersey. Jude Brown stomped and complained on the boat all the way and I had to wrap my arm around his neck to comfort him. There in Paterson, New Jersey, my father met with a young man in a black ulster coat and striped trousers and with a fine mustache that he must have been working on hard to remove his youth. He looked and spoke like a sailor and by that I mean he was short but strong and cussed casually when it seemed unnatural to do so in company you hardly knew.

My father was impressed with him instantly. This young man had convinced some New York investors who still had capital to part with their money to fund a firearms company set up in a corner of a silk-works, and there was no doubt in the man that the military would take up his design. It was an absolute certainty. His assurance to us.

My father shook his hand like he was pumping water.

I am sure that this smiling young man had no trouble extracting money from those cigar smokers with their handlebar mustaches and silk coats that they had trouble buttoning up. At twenty-two years or thereabouts he had certainly beguiled my father, a man twice his senior. I would later find that just a few years before he was taking laughing gas around county fairs from a wagon colored like a circus tent and for a half-dime turning the hayseeds into even bigger fools. I suspect he may have had this gas pumped into the factory, so deliriously enthused was my father, and even I myself, who was most suspicious of any person who did not have a key to my house, followed him around the factory like a puppy.

Wild Ones: Prowl by Zoey Daniels
This Is True Love (Exclusive! #1) by Jamie Wesley
This Girl for Hire by G. G. Fickling
Only Marriage Will Do by Jenna Jaxon
Trusting Jack by Hale, Beth
Invincible (The Trident Code) by Albertson, Alana
Endless Chain by Emilie Richards
The Mad Toy by Roberto Arlt
Into The Arena by Sean O'Kane
Fire Heart (The Titans: Book One) by Avera, Dan
Our partner