Read The Romance of Nick and Layla (Parts 1-3) Online

The Romance of Nick and Layla (Parts 1-3) 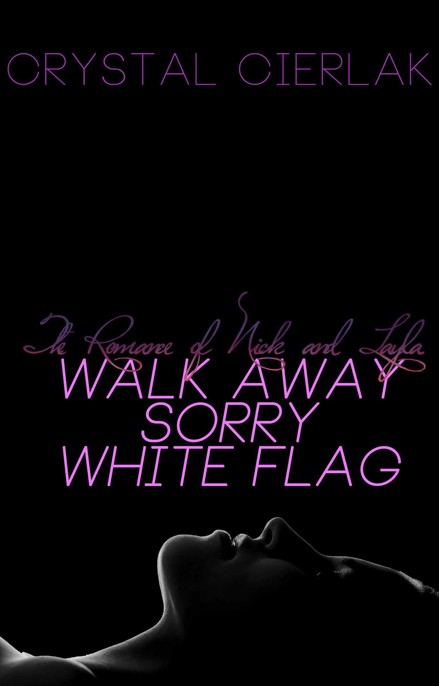 The Romance of Nick & Layla

The Romance of Nick and Layla
is a work of fiction. Names, characters, events and incidents are either the products of the author’s imagination or used in a fictitious manner. Any resemblance to actual persons, living or dead, or actual events is purely coincidental.

I don't believe in love. I think it's a waste of time. You give your heart away once and you're never quite the same. You never get that love back. Maybe, if you were lucky enough, you felt his love for you. I did. But it was gone quicker than it was here. Love consumes you. It envelops you inside its rough grip until you're powerless. But you don't feel consumed in it, just by it. There are no stars that twinkle, no butterflies in your stomach. And you certainly don't feel like your skin is the only thing keeping you from bursting in every direction.

Instead you're worried sick. You forget to live your own life because you're so scared that his will end faster. You want to take care of him. You want to provide for him and be there for him. Until the day he doesn't need you anymore. Well, he stopped needing me. But I never stopped worrying; I just learned how to conceal it.

He broke my heart every day. I was powerless to break his. He had a hold over me; I fell in love with him so easily. I always give in to him. And he knows it. Maybe at one point he loved me. Maybe he was just using me for sex and my companionship. It doesn't really matter anymore. Our marriage is a sham, but we're the only ones who know it.

Nobody even knows we're married, not even his closest friends or his family. But we get dressed up and make appearances just to give people something to talk about. Our faces are plastered in the society pages, in magazines, at televised events.... Everybody loves us together. When you look at us, arms around each other, smiling affectionately into each other, we look perfect. I would believe the lie myself; but I know better.

It's 8:09 and I've been banging on the door since eight sharp. Where the hell is Nick? Or at least the spare key? I picked up the welcome mat. No key. I looked in a hanging potted plant. Still no key. Then I checked under the mailbox and there it was, taped to the metal. I tore away at the tape and used the key to open the huge house.

I was immediately hit with the smell of candles that had burned all night long. Nick's keys lay on the floor in the foyer. A few feet away was a purse. I began picking up the items as I went up the banister and into Nick's bedroom. A pair of Nick's jeans. A micro-mini skirt. The cashmere polo I gave to Nick last Christmas (what a sentimentalist), and a beaded halter top and a bra from Victoria's Secret. And there they were. Nick sprawled out on his bed like a king, naked, and a blonde cuddling up to him.

I rolled my eyes as Nick moved in his sleep, making the blonde's eyes flutter open like a doe. She took one look at me and practically jumped into the ceiling.

"The maid. Here are your clothes. Get out. Thanks for stopping by."

"You can't kick me out!" the blonde protested. Jesus, one night with Nick and suddenly these girls think they live here.

"Sweetie I'll throw your clothes in the pool and laugh as you dive in for them. Now up and out! Don't worry about Nick he probably doesn't remember your name anyway." I watched with no amusement as the girl slipped on her clothes and ran out of the bedroom.

I went to the large windows and pulled open the drapes, letting in the morning sun off of the ocean. I blew out the candles on the dressers and in other nooks and crannies. When I turned around Nick was attempting to sit up and open his eyes.

"What are you doing here?" he grunted.

"I live here." Technically I lived in the house in Santa Monica, but he probably wouldn’t come back with that.

Nick looked down at the empty spot where the blonde had laid just minutes before. "Wasn't I with someone?" he asked groggily. God, what'd the guy do last night? Drink himself into stupidity?

"Yeah. Tina or something like that? Where'd she go?"

"She realized that everything looks bigger in the dark and went home."

"You're so not funny. What time is it?" He looked at the clock next to the bed and cringed. "Layla, get the fuck out of here. I just went to sleep two hours ago."

"Can't. We have an event tonight and there are a lot of things to do before then. Come on. Get up. I'll make you some coffee."

"Stop acting like you're my wife," he muttered, rubbing the sleep out of his face with raw fingers.

"I'm not going to play this game with you today, Nick. We have a lot of things to get done." I was in no mood to put up with his stubbornness. It wasn’t my fault he lacked personal responsibility, and it wasn’t my job to give him any.

"I have a better idea. Why don't you shut up and get your fine ass into bed with me?"

I scoffed. "Please Nick. Since when have you ever been interested in sleeping with your wife? You better be downstairs in five minutes or I'm going to use the hose again."

He couldn’t see my face but if he could have he probably would have only snickered at my expression. I hate it when he says shit like that.

"Oh come on, baby. You know I’m just messing with you. Come on into bed with me."

I turned around, my face contorted into disbelief. "As if you were at all appealing right now. Why don’t you put that thing away before you embarrass yourself?" Like I would get into bed with someone when the sheets were still warm from the woman – no, girl – who preceded me.

"You never seemed to mind before."

"Like I said sweetie, everything looks bigger in the dark. Five minutes!" And with that I left. I walked out of his room, into the second floor hallway, down the stairs and turned right into the rest of the house. I loved this house. Still do. Hell, I helped decorate it. I helped to make it everything Nick wanted it to be and more. I loved pleasing him. I loved the looks he got on his face when he discovered something in the house that was meant for only the two of us to understand. The moments were brief and excusable, but I saw them nonetheless and they made my heart tingle. Those were the moments that made all the crap almost bearable.

You see, the thing you have to understand about Nick and me is that while our relationship is very dysfunctional, it’s actually based on something real and concrete; a foundation: Insanity. But besides insanity, love. Love in the sense of I-can’t-get-enough-of-him-want-to-be-around-him-all-the-time. And that’s exactly how we were. But those days are gone. What happened and when did it happen? I’m not sure. It was just a sudden change in the wind. Or maybe it was subtly happening over time. Whether the change was microscopic or macroscopic I’m not sure, but, looking back, I can definitely see the gap. I hate thinking about it.

I was so surprised at how clean the house was considering I came over to clean it a week ago. Usually Nick adds his own personal touches five minutes after the cleaning supplies are under the sink. A shirt thrown on this couch. A shoe tucked in that corner. A condom or two under the bed. Stuff like that. But it was like he hadn’t even been here. So then where had he been if not at home?

I made some coffee and looked around the house, listening to the put-tut-tut of the machine sucking up the water, then dropping it in through the grounds and into the pitcher. God I missed this place. So many happy memories. So many unhappy memories. In retrospect I miss them all.

Nick appeared at my side a moment later. He was pouring coffee into a mug and looking at me concentrating on the house.

"What’s up with you?" he asked before taking a long sip of the steaming drink. He liked his coffee black. Don’t know why.

"Just thinking about you and me. The times we’ve shared," I replied.

"This place does have a lot of memories," he agreed. I nodded my head. "I’m gonna miss it."

I looked up at him, confused. What did he just say? "Say that again?"

"I’m selling the house. Thinking about buying a new one."

Is he crazy?! "What the hell for? This house is perfect. We built this house from the ground up together!"

"I need a change," he shrugged. His nonchalance was infuriating.

"When were you planning on telling me?" I asked. Another classic Nick Hudson move. Make decisions without first consulting the wife.

"I’m telling you now, aren’t I? What do you care? You have Santa Monica," he spat. I didn’t need to be reminded.

"Yes, but this is our place," I stressed, hoping he would understand.

Nick shook his head. "This hasn’t been our place since you moved out."

He was seriously not going there. "Do I have to remind you why I moved out in the first place?"

"First of all, you were sleeping around; In fact, you were having more sex than I was! Secondly, maybe if you appreciated my wife-like things in the first place we... Just shut up Nick! I can’t believe we are having this conversation again. After a year... I don’t know why.... UGH!" Calm down, he’s just being himself. The same self you fell in love with. "And can you blame me for not talking to you?"

The Burgher and the Whore: Prostitution in Early Modern Amsterdam by Lotte van de Pol
Life Support: Escape to the Country by Nicki Edwards
Hostage (Predators MC #3) by Jamie Begley
Compulsion: Magnetic Desires by Misti Murphy
Jaguar Sun by Martha Bourke
Little House On The Prairie by Wilder, Laura Ingalls
When Dead in Greece by L.T. Ryan
The Golden Condom by Jeanne Safer
What You Deserve (Anything for Love, Book 3) by Adele Clee
Hunt Me (Love Thieves #3) by Heather Long
Our partner