Read The Sacred Book of the Werewolf Online

The Sacred Book of the Werewolf 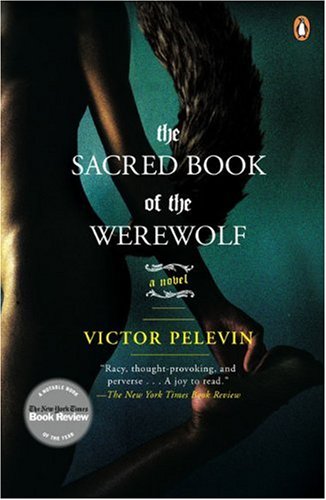 also by Victor Pelevin
THE HELMET OF HORROR: THE MYTH OF THESEUS AND THE MINOTAUR
HOMO ZAPIENS
4 BY PELEVIN
BUDDHA’S LITTLE FINGER
A WEREWOLF PROBLEM IN CENTRAL LONDON
THE LIFE OF INSECTS
THE BLUE LANTERN
OMON RA
THE YELLOW ARROW

Copyright © Victor Pelevin, 2005
Translation copyright © Andrew Bromfield, 2008
All rights reserved
Originally published in Russian by Eksmo, Moscow.
English translation first published in Great Britain by Faber and Faber Limited.
Publisher’s Note
This is a work of fiction. Names, characters, places, and incidents either are the product of the author’s imagination or
are used fictitiously, and any resemblance to actual persons, living or dead, business establishments, events,
or locales is entirely coincidental.
LIBRARY OF CONGRESS CATALOGING IN PUBLICATION DATA
Pelevin, Viktor.
[Sviashchennaia kniga oborotnia. English]
The sacred book of the werewolf / Victor Pelevin ; translated by Andrew Bromfield.
p. cm.
Summary: A novel about a fifteen-year-old prostitute who is actually a 2,000-year-old werefox who seduces men with
her tail and drains them of their sexual power. She falls in love with an FSB officer who is actually a werewolf.
eISBN : 978-1-440-60932-9
I. Bromfield, Andrew. II. Title.
PG3485.E38S8713 2008
891.73’44 — dc22
2008015563
Without limiting the rights under copyright reserved above, no part of this publication may be reproduced, stored in or introduced into a retrieval system, or transmitted, in any form or by any means (electronic, mechanical, photocopying, recording or otherwise), without the prior written permission of both the copyright owner and the above publisher of this book.
The scanning, uploading, and distribution of this book via the Internet or via any other means without the permission of the publisher is illegal and punishable by law. Please purchase only authorized electronic editions and do not participate in or encourage electronic piracy of copyrightable materials. Your support of the author’s rights is appreciated.

It’s an interesting story. The first seal that he ordered for me was carved on a ruby, and all five letters were incorporated into a single symbol.

Killer Shortbread by Tom Soule, Rick Tales
Deceiving the Duke of Kerrington (Ladies of Deception) by Hartman, Ginny
Rockets in Ursa Major by Fred Hoyle, Geoffrey Hoyle
How to Fail at Almost Everything and Still Win Big: Kind of the Story of My Life by Adams, Scott
The Magic Thieves by Serena Yates
The Master of Rain by Bradby, Tom
Rattle His Bones by Carola Dunn
Smart vs. Pretty by Valerie Frankel
Life Drawing for Beginners by Roisin Meaney
Lily (Wildflowers Of Montana Book 5) by Vanessa Vale
Our partner