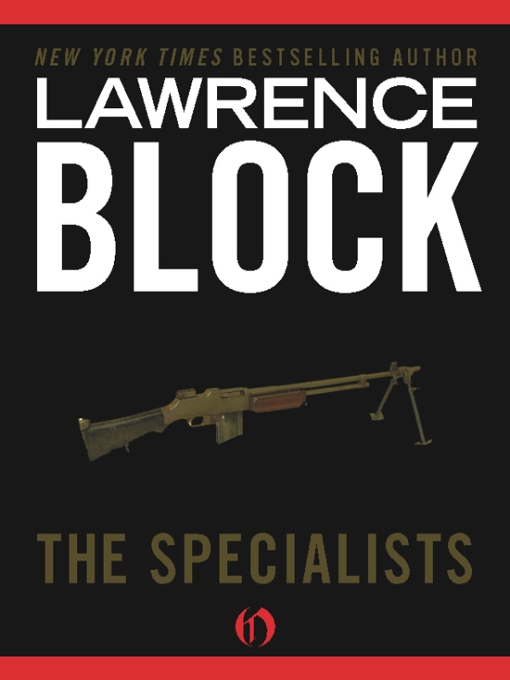 A NEW AFTERWORD BY THE AUTHOR

A BIOGRAPHY OF LAWRENCE BLOCK

Albert Platt looked better with clothes on. He had his suits made by an East Side tailor, his shoes by a London bootmaker, and his ties by a countess. With his clothes on and his hair combed and his jowls shaved and cologne, he looked like a successful hoodlum. Naked, he looked like a gorilla.

He was naked now. He sat on the edge of a high-backed Victorian wing chair in the living room of his suite at the Desert Palms. Glossy black hairs curled on his abdomen and chest. Sweat beaded on his forehead and under his arms.

In his right hand he held a .38-caliber revolver with a two-inch barrel. The gun was heavy, and Platt eased the load by resting his elbow on the arm of the chair. The muzzle of the gun just touched the center of the girl’s forehead.

The girl was also naked, which was all she had in common with Platt. She was half his age and half his weight, a long-bodied redhead, trim of breasts and bottom and thighs. She knelt at Platt’s feet like a supplicant at the rail.

“Two hundred bucks,” Platt said. “Fifteen minutes, half an hour, two bills isn’t bad, right? You just be a good girl and you can go buy yourself a Cadillac.”

The girl heard the words but couldn’t hold onto them. Nothing existed for her now but the mouth of the revolver. She had begun to perform as he had demanded, and the gun must have been lodged between the cushion and frame of the chair, because all at once it was in his hand and its cold metal mouth was touching her forehead and his voice was telling her that she would barely feel it at all, just one bright streak of pain and it would be over before she knew it.

“A gun goes off,” Platt said. “In your forehead or in your mouth, your pretty mouth. A bang is a bang.”

The girl was performing what journalists call an unnatural act. She had always wondered why it was so labeled, because it had never seemed anything other than natural to her. Until now.

An important man, they had told her downstairs. Donna, kid, this is an important gennulman, you want to treat him right. A banker, a very well-connected gennulman, his first trip to Vegas in three years, Donna, you want to make him real happy.

An image flashed in her mind, a newspaper halftone, all dots, her face, with one huge black dot in the center of her forehead. A two-column cut with a headline over it and a few paragraphs below. Donna Mackenzie model and dancer found in the desert persons unknown funeral private.

The trigger squeaked back. An eternal instant, a world of forever black.

The hammer clicked on an empty chamber.

Laughter, roaring, rolling, dying down. His footsteps across the deep carpet to the bedroom. The slam of the bedroom door.

She stood up. She spat on the carpet. She looked at the stain. There was a sudden rush of vertigo, as if the carpet were miles away. Her head swam, her knees buckled. She almost fell.

She pulled her dress over her head, grabbed up her underwear and stockings. She put on one shoe and couldn’t find the other. She was looking around for it when she heard his laugh again from the other side of the bedroom door.

She kicked off the one shoe. The hell with the shoes. Her purse was on the lamp table and she snatched it with her free hand. The hell with the shoes, they were cheap shoes, she could buy other shoes. She had two hundred dollars in her purse, two hundred beautiful dollars that she would love to change into dimes and shove up his ass. Or make it pennies, the son of a bitch, the dirty son of a bitch.

She ran for the door.

Manso was shaving when someone started pounding on the door. He had a towel around his middle and a face half full of lather. He called out, “Yeah, just a minute,” and brought the razor into position for another stroke.

The pounding didn’t stop, and over it he heard Donna’s voice. He was about to tell her to wait, but something in her tone changed his mind. He went to the door, still carrying the razor, still wearing the towel and the lather.

He had never seen her like this, face pale and drawn, eyes crazed, desperate. He started to say something, stopped himself, turned to lock the door. When he turned around again, she was climbing out of her dress.

She was suddenly gasping for breath. He stared at her. He had been in Vegas for three weeks and sleeping with her for two and he had never seen her like this. She wasn’t a girl who got like this. She was bright eyes and laughter at the shows and cool reserve at the dice tables and friendly clean fire in bed. She was never hysteria; it didn’t fit.

Afterward he lit cigarettes and called down for ice. He made drinks and took them into the bedroom. She went through hers in a hurry and he built her a second.

She said, “I never exactly told you this, but I’m sort of like a hooker.”

“No amateur could be so skilled.”

“Well, two and two. Vegas, and this place, and no job or husband. And you said a dancer, and your legs, your muscles are different from a dancer’s.”

“I didn’t think you knew because you never let on. It didn’t bother you?”

“Sure it did. It made me impotent.”

“No, I’m the one who’s sorry, and maybe I need jokes. But didn’t you feel anything?”

“Maybe flattered. To be on the free list. You want to tell me about it, Donna?”

“Because you didn’t just wake up tonight and remember the nuns telling you that bad girls go to hell when they die. If you don’t want to talk about it, fine, but I get the feeling you do.”

“Go to hell. Oh, I didn’t mean you, that you should, I was just being an echo. What you said. Dying and going to hell. Did you ever almost die?”

“Did you ever have somebody point a gun at you and think you were going to die?”

He very nearly said,
I got killed,
but it wasn’t the time. “It was in the Army, there were lots of times, but either I shot first or something got me out of it.”

“They said he was a banker. Very important, a banker, but he didn’t talk like one or act like one. God knows a banker can be as kinky as anybody else, but he was a banker like I’m a boy. He was——”

“What I thought first was he must be like a numbers banker. Or a bookmaker, you know, a major bookmaker that they might call him a banker so he’s not just another bookie.”

She turned to him. Her eyes worked into focus. “I’m all right now,” she told him.

He didn’t interrupt. The hysteria had passed and she was able to tell it straight enough now, and he let her do it her way and just lay there on the double bed nursing his drink and taking it all in. The colonel was right, he found himself thinking. You had to draw a line through mankind, a wavy line but a line, and on one side you had Good and on the other side you had Evil. There was good and bad in everyone, sure, and every shitheel was some mother’s son, and it was all well and good to know this, but when push came to shove, it was just words; there was Good and Evil with no shades of gray and Judgment Day came seven times a week.

When she ran out of words, Manso stood up. “Stay right here,” he said. “You know where the liquor is. Stay here.”

“Oh, hell,” he said. “This is going to kill the image, but all I’m going to do is finish shaving. Because I want to finish shaving, and because I need a few minutes to think about this. Just stay here.”

He ran water, spread fresh lather. He was 28, and the face in the mirror looked a little older. This was unusual; for the past three years he had looked 23 almost all the time. But every once in a while his face put on five years. Generally it was heart-shaped and cherubic, topped by a cap of black curls and dimpled on either side of his mouth. Now the planes of his face were harder, and the eyes had turned, and the general impression was no longer one of a moderator of a daytime television show.

He took his time shaving, rinsed, splashed with cold water and after-shave lotion. He thought about beating Platt up, even killing him. Of course there was always the chance that Donna was building fantasies in her head. He could have told her in advance that it was just an act he went through with hookers, say, and Donna later got carried away with the realism of the whole thing.

But what he kept coming back to was this business of Platt insisting he was a banker. A hood who owns banks?

He went back to the bedroom. She was nursing a new drink and smoking another cigarette. “What bank?”

“Platt. What’s his bank? You said he was talking about it.”

“He was a hood, Eddie. Believe me. You live in Vegas and you get to know what a hood is.”

“There are hoods you’ll meet who talk like bankers, but I never met a banker who——”

“Yeah. Did he mention the bank?”

“No, I’m positive it was two. And he said New Jersey, I remember that much.”

“You remember the city?”

“Two cities, one for each bank.”

“I think I’d remember if I heard. Is it important?”

“I don’t know. You’d remember if you heard. Jesus, I think I just named every town there is in Jersey. Princeton? Secaucus?”

“No.” She thought for a moment. “One of them had
Commerce
in its name.”

“That narrows it down.”

“He was the same way. The one with
Commerce,
that was the one he thought I ought to recognize. He asked me what the hell was wrong with me, didn’t I ever listen to a radio? I said yes and he said maybe it wasn’t on yet. I don’t——”