BOOK: The Tavernier Stones
3.05Mb size Format: txt, pdf, ePub
Read Book Download Book
ads
There would be a price, he realized as he circled the barn looking for his father. He would lose much of his individualism as a member of the community. He would submit to group authority and thus renounce almost every personal preference he had. He would drop cartography and take up farming.
He would never see Sarah again.
He found his father hoeing in the tomato garden, chopping each stubborn lump of clay until it surrendered and fell to pieces. John grabbed another hoe leaning against the barn and walked out into the field to join him.
Clarence Graf halted in mid-chop when he recognized his son’s face. John was afraid he would drop his hoe and walk off. But the old man could see that John was dressed plain, and instead he squinted in curiosity.
John went to work beside him, chopping at clods with “take that” thrusts of the hoe. After a moment of watching, his father returned to the chore as well, but kept his head turned slightly away.
John didn’t look at him. Because he knew that if he did he would embarrass him by discovering tears in his eyes. The reward, he decided, was indeed worth the price.
After a few more minutes of hoeing for the sake of hoeing, John absentmindedly reached into his pocket for the ruby David had given him.
“What’s that?” his father asked gruffly, as though glad to come up with something to say.
“A present. For Rebecca.” He handed the stone to his father.
Clarence Graf fingered the bauble, enjoying its tactile qualities. He stuck out his lower lip and grunted approval. “I’m sure she’ll like it.”
“You wouldn’t happen to know where she is …”
The old man raised his six foot four frame above the tomatoes and squinted across a field of low corn. There, silhouetted against the horizon, a young lady ran toward them through the stalks, her arms raised in triumph, her long skirt billowing forward with each thrust of a knobby knee.
BIBLIOGRAPHY
The Story of Maps
by Lloyd A. Brown (Dover Publications, 1979). Dover has kept this 1949 publication in print, and wisely so. It’s the best one-volume history of cartography on the market.
Travels in India
by Jean-Baptiste Tavernier, translated by Valentine Ball (Macmillan, 1889). Yes, Tavernier really existed, and most of what I wrote about him is true. But sadly, the seventh voyage, as I have described it, is fiction. This narrative is for serious readers only. Reprints are available from various publishers.
Diamonds: Myth, Magic, and Reality
, edited by Robert Maillard (Crown Publishers, 1980). An excellent all-around book about diamonds, especially for beginners who want a comprehensive and engaging approach. A brief biography of Tavernier, with some of the drawings he made of stones now missing, is included.
Legendary Gems or Gems that Made History
by Eric Bruton (Chilton Book Company, 1986). If you’ve ever wondered whether there was an authoritative history of all the world’s famous gemstones, including those whose whereabouts are unknown, your search is at an end.
Gemstones of the World
by Walter Schumann (Sterling Publishing Company, 2007). The best field guide to gemstones. Most of the specimens photographed are from collections in Idar-Oberstein.
Rocks, Gems and Minerals; A Golden Guide
by Herbert S. Zim and Paul R. Shaffer, Illustrated by Raymond Perlman (St. Martin’s Press, 2001). Excellent for young people. First published in 1957, it’s the way many of us were introduced to the subject. I suppose I didn’t actually draw anything directly from this book for my novel, but if I hadn’t studied the book as a kid, I wouldn’t have written the novel.
The Codebreakers
by David Kahn (Scribner, 1996). The definitive work on the history of cryptology. Despite its enormous popularity in cryptology circles, it remains one of the great undiscovered nonfiction books in print.
The Riddle of Amish Culture
by Donald B. Kraybill (The Johns Hopkins University Press, 2001). Another definitive source. I spent eighteen months in Lancaster County, Pennsylvania, and still didn’t get what I needed. Mr. Kraybill’s book solves the riddle.
About the Author
Stephen Parrish is a cartographer and gemologist. He lives in Germany.
The Tavernier Stones
is his first novel. Visit him online at
www.stephenparrish.com
. Book clubs with ten or more members are invited to schedule his attendance, via Skype or speaker phone, at one of their meetings. Write to [email protected]
stephenparrish.com
for information. 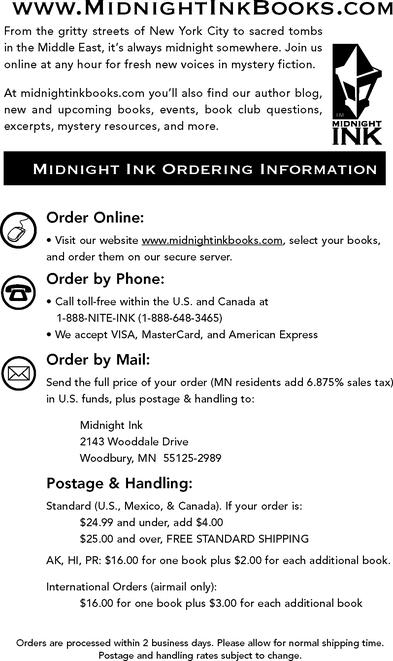 Board Stiff (Mattie Winston Mysteries) by Ryan, Annelise
Mistakes I Made During the Zombie Apocalypse by Kilmer, Michelle
Bad Company by PJ Adams
My Life with Bonnie and Clyde by Barrow, Blanche Caldwell, Phillips, John Neal
The 39 Clues Unstoppable Book 3 Countdown by Natalie Standiford
HARD FAL by CJ Lyons
0062104292 (8UP) by Anne Nesbet
Disney After Dark by Ridley Pearson
The Art of Murder (Dead-End Job Mystery) by Elaine Viets
Things Made Right by Tymber Dalton
Our partner