Read The Vampire Who Thirsted for a Wolf Online 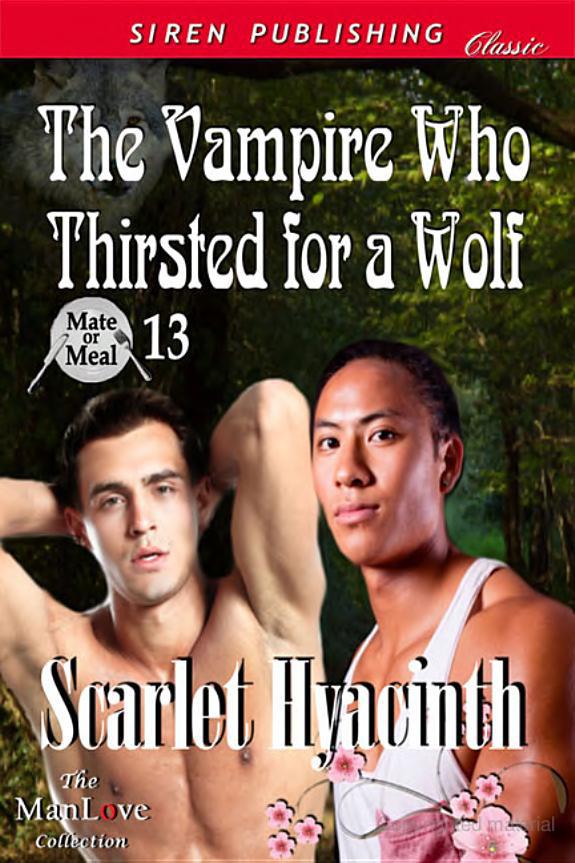 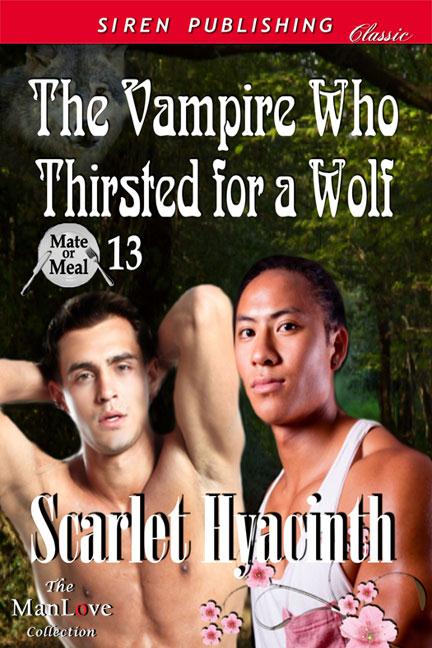 Blood slave or bonded? It is a question that has hounded vampire

Kaname Yamamoto since he first saw werewolf Derek Wade. In all

his years as an elder, he’s never experienced such a powerful pull

toward anyone. But is their connection just lust, or something

Derek’s duty as an Alpha’s son binds him, keeping him from

exploring his feelings for Kaname. But he cannot resist his desires,

and as he returns into Kaname’s embrace, he realizes he doesn’t

even want to. For the first time in his life, he opens his heart and

trusts someone with his innermost vulnerabilities.

between the species is shattered by an unexpected attack. Old

wounds are stirred, and Derek’s relationship with Kaname is

threatened. Can their bond withstand the weight of divided

THE VAMPIRE WHO THIRSTED

Your non-refundable purchase of this e-book allows you to

only ONE LEGAL copy for your own personal reading on

your own personal computer or device.
You do not have

resell or distribution rights without the prior written

permission of both the publisher and the copyright

owner of this book.
This book cannot be copied in any

format, sold, or otherwise transferred from your computer

to another through upload to a file sharing peer to peer

program, for free or for a fee, or as a prize in any contest.

Such action is illegal and in violation of the U.S. Copyright

Law. Distribution of this e-book, in whole or in part, online,

offline, in print or in any way or any other method currently

known or yet to be invented, is forbidden. If you do not

want this book anymore, you must delete it from your

WARNING: The unauthorized reproduction or distribution

of this copyrighted work is illegal. Criminal copyright

gain, is investigated by the FBI and is punishable by up to 5

illegally, please let us know at

THE VAMPIRE WHO THIRSTED FOR A WOLF

ALL RIGHTS RESERVED:
This literary work may not be

reproduced or transmitted in any form or by any means, including

electronic or photographic reproduction, in whole or in part, without

All characters and events in this book are fictitious. Any resemblance

to actual persons living or dead is strictly coincidental.

Wolf
by Scarlet Hyacinth from BookStrand.com or its official

distributors, thank you. Also, thank you for not sharing your copy of

This book is copyrighted intellectual property. No other individual or

rights, or any kind of rights to sell or to give away a copy of this

This is Scarlet Hyacinth’s livelihood. It’s fair and simple. Please

respect Ms. Hyacinth’s right to earn a living from her work.

THIRSTED FOR A WOLF

“Thank you for receiving us in your coven. You remember my son,

Kaname smiled at the werewolf Alpha, glancing from Soren to

Derek. Yes, of course he remembered. As a rule, vampires had an

excellent memory, and besides, Derek had made quite an impression.

The two werewolves had just arrived from the United States, and

Kaname had immediately wanted to see them. He’d known in

advance that the Wades would be accompanied by two magical

creatures, an incubus and a warlock. They had a common enemy, and

while under normal circumstances, Kaname would have been under

no obligation to aid them, he was irritated that their foe had managed

to somehow circumvent of all Kaname’s precautions. Kaname prided

himself in having eyes and ears everywhere, and yet, Tyrell Hall

evaded him. It was humiliating, and it needed to stop before it caused

restlessness within the coven. Given the situation, he wanted to create

“Welcome, Alpha Wade,” he told Soren. “Yes, of course I

remember. It is a pleasure to have you in my home. Our cooperation

in this matter is of great importance to me.”

“The gentlemen with us are Rhys Whitaker and Noah Hall,” Soren

added, pointing to the other two men present.

“Whitaker-san and I have met.” Kaname nodded at the incubus. “I

have not had the pleasure of Hall-san’s company so far.”

The warlock took this cue and stepped forward. “It’s an honor to

be here, Yamamoto-sama,” he said smoothly. “I offer my assistance in

capturing Tyrell. As you probably know, he is my father, but the two

Leaning against his desk, Kaname hummed thoughtfully. He kept

of Noah’s involvement with the Wade clan. Eyeing the young warlock

from head to toe, he mentally placed Noah in the column marked

“potentially useful.” If there was anyone who knew Tyrell and could

guess where the damn intruder might hide, it was him.

There were so many things that needed to be dealt with,

arrangements that had to be made. Thankfully, Kaname had prepared

accommodations for the group ahead of time, so that, at least, was

taken care of. He gestured his guests to sit in the armchairs in his

office, and as they did so, he followed their example and joined them.

Kaname was automatically falling back onto his deeply engrained

manners when, in truth, he focused on something else entirely. Oh, he

acknowledged the importance of the visit of the Wades. But even that

realization didn’t keep him from observing the quiet young werewolf

who watched him with a serene, polite expression.

Kaname had first met Derek in the United States, when the

tentative alliance. While many vampire leaders were wary of the

intentions of the important shape-shifter clans, Kaname had decided

to take a chance and investigate this interesting development. Both the

Cunninghams and the Wades were quite influential, and Kaname

could use them to further the interests of his kin.

Upon his visit, though, Kaname had found out another surprising

tidbit. Since vampires and shifters had kept to themselves for

centuries, Kaname had forgotten just how attractive other species

could be. Werewolves in particular seemed to have something that

Kaname had always accepted his sensual vampire nature, so he’d

used his stay with his potential allies to explore this attraction. Many

shifters had been willing to play along, as, apparently, the chemistry

However, none of those men and women attracted Kaname like

Derek did. There was just something about him, a commanding

hiding behind that mask. Much like vampires, Derek’s people were

creatures of passion, their instincts very strong and their sexuality

intense. But compared to others Kaname had met, including Derek’s

close family, the young wolf was sedate, and to a certain extent, aloof.

Kaname would have loved to tear down those barriers. He suspected

Derek would be wild in bed. The cold ones always were.

Shaking himself, Kaname tore his attention away from Derek.

With Soren Wade there, it simply would not do for the Alpha wolf to

realize Kaname’s interest in Derek. Besides, Kaname was not ruled by

his cock. He was an elder, and he could control his lusts so that he

could focus on the welfare of his people.

Hall’s trail,” he told Soren. “I am certain that he can’t have stayed in

Tokyo since we would have found him by now. I have my kin

scouring the country for his trail, and evidence seems to indicate he’s

“North,” Soren repeated, as if tasting the word. “Do you believe

“Not yet,” Kaname replied. “He must have a reason for even

stepping within the borders of my country. It’s well known that

Ashes to Ashes and Cinder to Cinder by Cameron Jace
Sweet Seduction Sacrifice by Nicola Claire
The Chalice by Phil Rickman
Leslie Lafoy by The Rogues Bride
Dr. Nicholas Is Ridiculous! by Dan Gutman
Faun and Games by Piers Anthony
Marcus Agrippa: Right-hand Man of Caesar Augustus by Lindsay Powell
The Goddess Abides: A Novel by Pearl S. Buck
The Next Skywatcher: Prequel to The Last Skywatcher Triple Trilogy Series (The Last Skywatcher, Anasazi Historical Thrillers with a Hint of Romance Book 1) by Jeff Posey
Of Beetles and Angels by Mawi Asgedom
Our partner