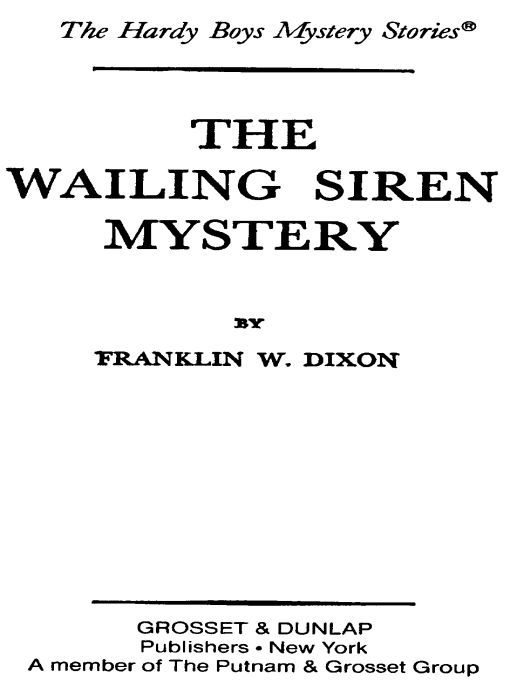 Table of Contents
Title Page
Copyright Page
Â
CHAPTER I - Money from the Sky
CHAPTER II - Two Losses
CHAPTER III - Telltale Tracks
CHAPTER IV - Followed!
CHAPTER V - The Ransom Demand
CHAPTER VI - Tailing a Pigeon
CHAPTER VII - A Suspicious Salesman
CHAPTER VIII - The Night Prowler
CHAPTER IX - A Cry for Help
CHAPTER X - The Detector
CHAPTER XI - A Hoax
CHAPTER XII - A Strange Pet
CHAPTER XIII - Another Theft
CHAPTER XIV - The Mysterious Light
CHAPTER XV - An Urgent Plea
CHAPTER XVI - Two Knockouts
CHAPTER XVII - Trouble at Sea
CHAPTER XVIII - Caught!
CHAPTER XIX - Danger in North Woods
CHAPTER XX - A Surprise Capture
Â
THE WAILING SIREN MYSTERY
CAUGHT in their motorboat the
Sleuth,
by a sudden storm at sea, Frank and Joe Hardy are helpless when the engine conks out. Drifting farther from shore amid the tumultuous waves, the boys are relieved to see the lights of a yacht. But their SOS is ignored.
The shrill sound of a siren fills the night air. Moments later, a helicopter drops an object alongside the Sleuth. To the young detectives' astonishment it proves to be a wallet containing two thousand dollars.
The next day their dose pal Chet Morton rushes to the Hardys' home to report that the Morton farm truck carrying a shipment of high-powered rifles belonging to his uncle, a big-game hunter, has been stolen.
These two apparently unconnected events are clues in a tangle of mystery which turns out to be one of the detective brothers' most exciting adventures. 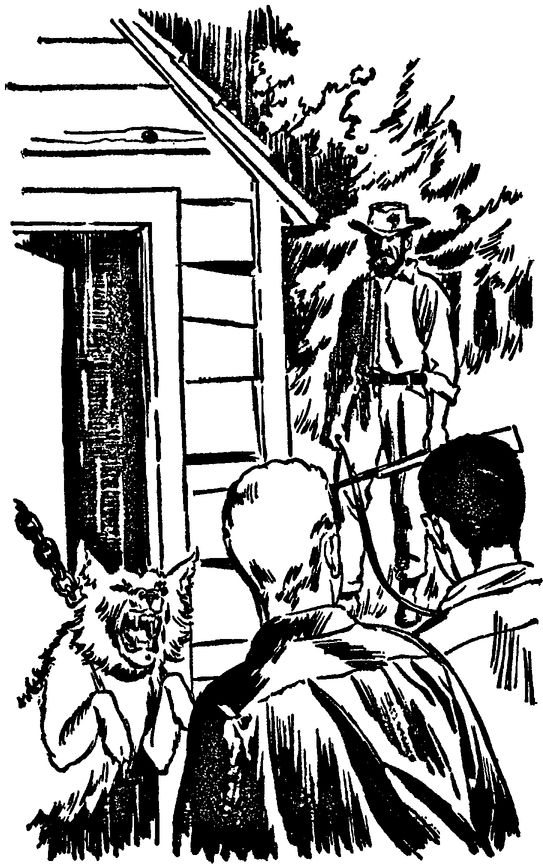 “Stand where you are!” the man ordered 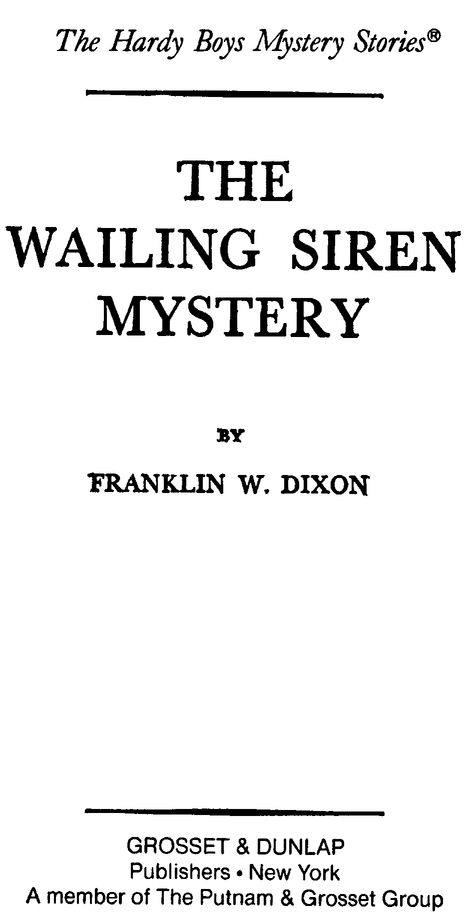 CHAPTER I
Money from the Sky
Â
Â
Â
THE
Sleuth
roared toward Barmet Bay as fast as its propeller could churn the sullen sea. At its wheel sat Joe Hardy, tensely watching the black clouds. His brother Frank bent anxiously over the throbbing motor.
“Think we'll make it?” Joe asked.
“If the engine holds out. Listen! It's missing again!”
The motor coughed. At the same time a jagged bolt of lightning flung itself from a towering thunderhead. It was followed by a deafening crash. As rain poured down on the boys in blinding sheets, the engine suddenly conked out.
“We're in for it!” Frank called.
“What's the matter?”
“It could be the gas line.”
Frank opened the hatch to the engine, grabbed the toolbox, and set to work. Without power, the
Sleuth
was in danger of being capsized by the giant waves.
“I'll try to keep her heading into the wind,” Joe shouted.
The storm had broken in all its fury. Lightning flashed almost continuously, and the air reverberated to the roll of thunder. One blinding flash hit the water not far from the boat.
“Wow!” Joe exclaimed. “A little closer and we would have had it!”
“Never saw a storm come up so fast,” Frank said.
The Hardys, high school boys out for an evening cruise in their motorboat, had gone farther into the ocean from Barmet Bay than usual. Dark-haired Frank, tall, slender, and keen-witted, was worried. Joe, a year younger, with blond, wavy hair and an impetuous nature, was not too concerned as yet.
This trait of Joe's was responsible for their present predicament. Joe had listened to only the first half of the late-afternoon weather report. Now the two boys were caught in the center of a heavy summer squall.
Frothy whitecaps slapped over the side of the boat as it rocked dangerously in the turbulent sea. The ponchos that the boys had grabbed out of a locker gave them some protection from the rain, but their slacks and sneakers were becoming soaked. And the Barmet Bay inlet, with its blinking beacons, seemed to be drifting away from the Sleuth at an alarming rate.
“How's it coming?” Joe called.
“No luck yet. If this storm keeps up, Mother will be a wreck. You know how she worries about us being out here in bad weather.”
“And Aunt Gertrude isn't helping her any,” Joe added. “She's probably telling Mother of the perils of the sea and why boys shouldn't have motorboats.”
“I wish Dad were home to calm them,” Frank said. “Did he say when he was coming back from Washington?”
“No,” Joe replied. “He never can tell how long his secret government cases are going to last.”
“I wonder what it's about this time. Dad said we might be of some help to him inâ”
Frank was interrupted by another large wave which struck the
Sleuth
with a resounding whack.
As Joe pulled hard on the wheel to avoid an avalanche of water, he cried out, “Frank, look!”
In the distance a yacht was bobbing up and down in the giant waves.
“Maybe the captain will help us out,” Frank suggested. “Let's signal.”
He picked up a flashlight and beamed an S O S, hoping to attract attention. There was no response. The
Sleuth
was evidently too low in the water for the signal to be seen.
In a matter of minutes it was completely dark on the water. The lightning and thunder ceased, but the rain and heavy wind continued.
The motor of the
Sleuth
was still dead. Frank had been unable to locate the trouble with the craft rocking so violently. The use of tools was out of the question.
Suddenly Joe shouted, “Frank, the yacht's heading this way. She'll run us down!”
Frantically Joe signaled with his flashlight. A moment later the winking lights of the ship were blotted out.
Hearts beating wildly, the boys waited. If the ship came closer without seeing them, there would be only one thing for them to doâjump overboard!
Suddenly the boys saw the yacht's lights again. They were farther away than before.
“Whew!” said Frank in relief.
“I think I hear a helicopter,” Joe said. “Let's signal again.”
Above the roar of the wind and the breakers came the sound of whirling rotors.
“That pilot's crazy to be out in a storm like this,” said Joe.
“Maybe he's lost. From the sound, he must be circling. But I can't see him.”
“Nor I. Hope he doesn't think the light on the yacht is a landing field,” Joe said with a shudder.
At that moment the wail of a siren filled the air, “Where's that coming from?” Joe asked. 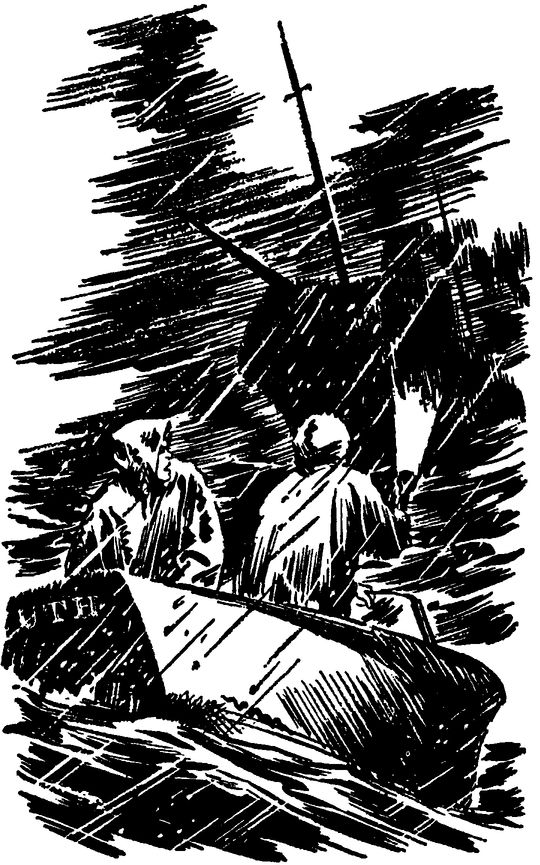 “She'll run us down!” Joe shouted
“Either the copter or the yacht,” Frank reasoned. “The sound couldn't carry this far from shore in the storm.”
The yacht's deck lights blazed again. Then, as before, they disappeared.
“What's going on?” Joe asked.
“Wish I knew.”
Clear vision was cut off by the blinding rain. Five minutes, ten minutes went by. The rotors could be heard faintly.
Then suddenly the sounds of the helicopter became clearer again. Within a matter of seconds the craft was directly overhead. As the boys looked up, there was a swishing sound, then a smack on the water directly alongside the
Sleuth.
Leaning way over, Frank just managed to grasp an object as it was about to sink beneath the waves.
“What is it?” Joe asked.
“Feels like a wallet! And a fat one too.”
Focusing his flashlight on the billfold, Frank whistled. “It's full of money!”
CHAPTER II
Two Losses
Â
Â
Â
JOE'S eyes popped at the sight of the bulging wallet. “It must have dropped from the helicopterâbut why, is more than I can figure out,” he muttered.
Frank exclaimed, “Hundred-dollar bills!” As he started to count them, Joe shouted, “Hang on!”
A big wave was bearing down on them. It hit the craft broadside, tilting it and throwing Frank and Joe into the churning water. Automatically they struggled out of their ponchos.
Despite the predicament they were in, Frank and Joe kept their heads. Being sons of Fenton Hardy, the famous detective, they had been well schooled in meeting perilous situations.
Starting with the mystery of
The Tower Treasure,
they had had many narrow escapes tracking down criminals. Their latest case, known as
The Secret of the Lost Tunnel,
had taken them to the South on the trail of Civil War gold. But now they realized that the elements could be as dangerous as the craftiest of criminals.
Spluttering and struggling, Frank and Joe fought their way toward the
Sleuth.
Though expert swimmers, they had all they could do to overtake it.
Joe was the first to grasp the side of the boat. With eyes smarting and head spinning, he hauled himself over the gunwale.
Then Frank hoisted one leg over the side and tumbled into the bottom of the boat.
“Didâdid you lose the wallet?” Joe asked.
Frank held up the dripping wallet. A quick flip showed the money was still there. They could count it later. Frank put it in his pocket.