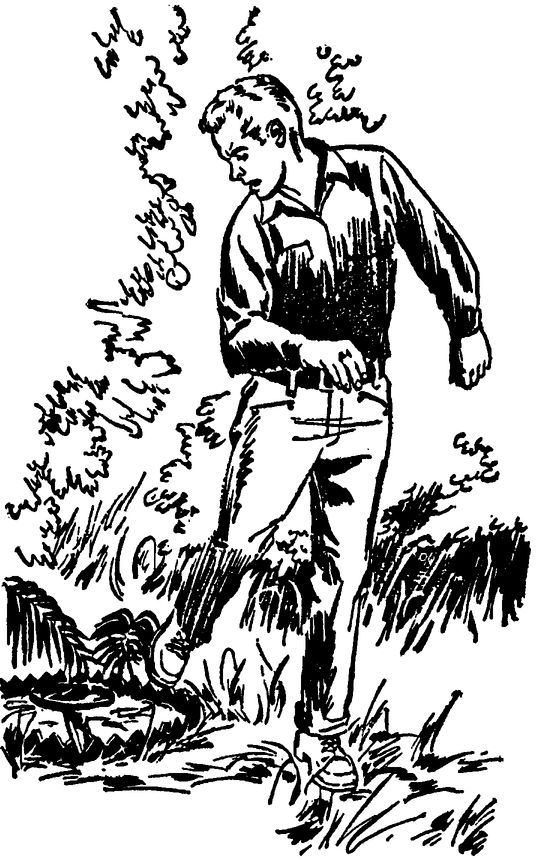 His foot just missed the trap!
Frank strained at the crude paddle to drive the canoe ashore. Despite their efforts, water was halfway to the gunwales when the bow scraped the pebbly bottom of the left bank.
“Whew! Just made it!” Chet exclaimed.
“Wait here!” Frank said, then dashed downstream along the bank. The whistle sounded again!
Within a few seconds Frank found himself at a sharp bend in the river. Joe was nowhere in sight. Frank whistled. There was no reply.
“Where'd he go?” Frank murmured.
He hoped his brother was not in danger. But where to look for him was a puzzle.
Frank decided to go back to Chet. Joe might have headed in that direction.
“Didn't you find Joe?” Chet asked, wide-eyed.
“Not yet. The sound seemed to come from both sides of the stream,” Frank replied, perplexed. “I hope it doesn't mean somebody was imitating our bird call.”

Kate Sherwood - Dark Horse 2.3 - Into the Light by Kate Sherwood
Somebody Like You by Lynnette Austin
Fran Rizer - Callie Parrish 06 - A Corpse Under the Christmas Tree by Fran Rizer
The Laird and I: A Kilts and Quilts of Whussendale novella by Patience Griffin
Blood's Shadow: The Lycanthropy Files, Book 3 by Cecilia Dominic
Posterity by Dorie McCullough Lawson
Person of Interest by Debby Giusti
Trusting Hearts (The Heart Series) by Donahue, S.
Echo Six: Black Ops 4 - Chechen Massacre by Eric Meyer
Sinful Suspense Box Set by Oliver, Tess
Our partner