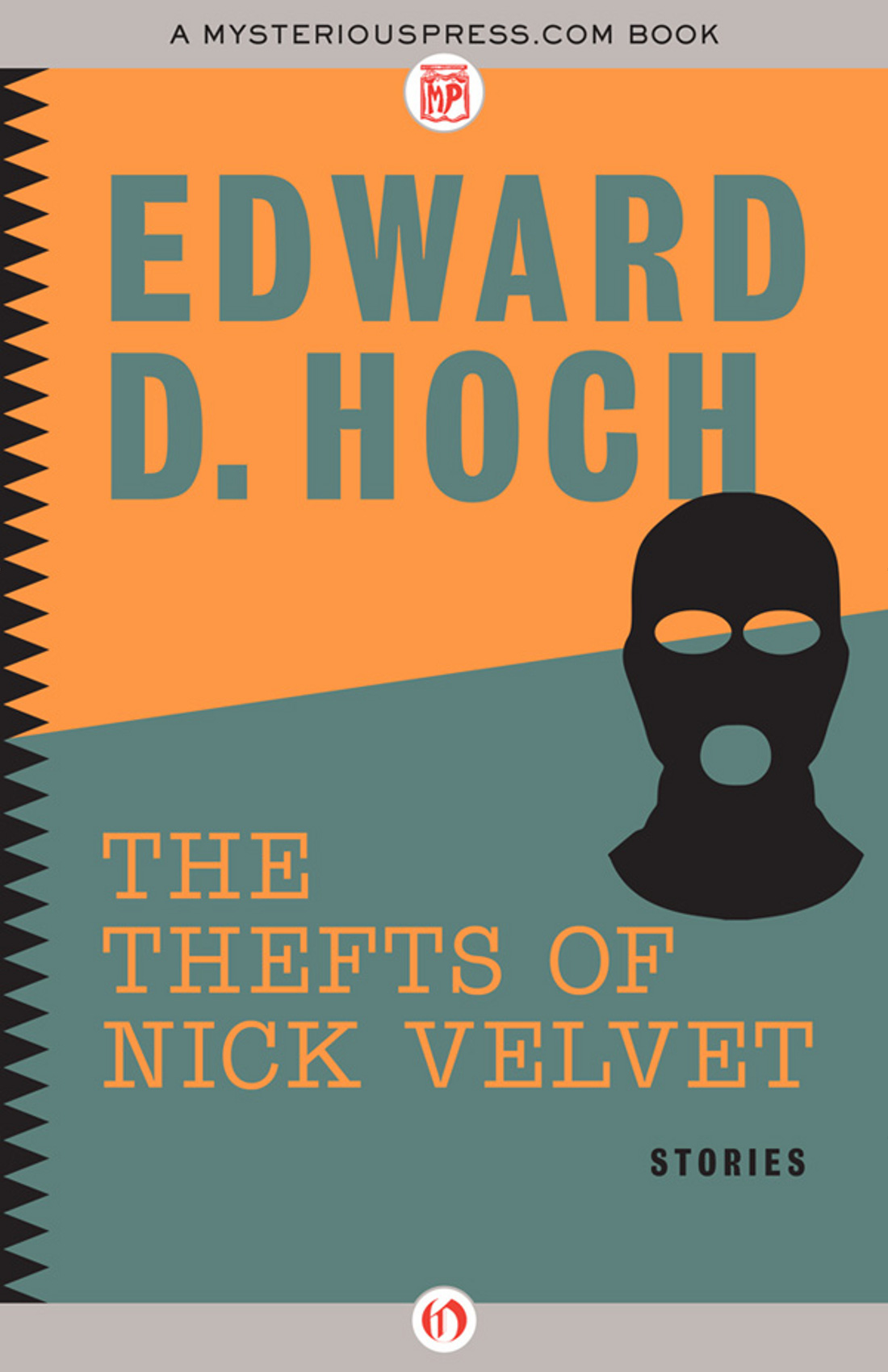 For Marge and Ed Blodgett

The Theft of the Clouded Tiger

The Theft from the Onyx Pool

The Theft of the Toy Mouse

The Theft of the Meager Beavers

The Theft of the Silver Lake Serpent

The Theft of the Seven Ravens

The Theft of the Mafia Cat

The Theft from the Empty Room

The Theft of the Crystal Crown

The Theft of the Circus Poster

The Theft of Nick Velvet

The Theft of the General’s Trash

The Theft of the Bermuda Penny

N
OW THAT I’VE WRITTEN
thirty-four short stories about an unusual thief named Nick Velvet, perhaps it’s time I said a few words about Nick’s origins, and about how the original concept of a series character can undergo radical changes with the passage of time. There seems no better opportunity than this fine edition of Nick’s best adventures, published by The Mysterious Press.

The first Nick Velvet story, “The Theft of the Clouded Tiger,” was written late in 1965 and published in the September 1966 issue of
Ellery Queen’s Mystery Magazine
. Two events, one personal and one literary, probably led to the series. During 1965 I’d published the first three stories of my Rand series (about a British cipher expert) in the pages of
EQMM,
and I was anxious to follow it up with a second series character created especially for that magazine. On a broader literary front, 1965 marked the peak of James Bond’s popularity. The final Ian Fleming novel and the most financially successful of the Bond films (
Thunderball
) were both released that year.

As originally conceived, Nick Velvet was to have been my answer to James Bond—a modern, sophisticated thief who used all the latest gadgets to pull off unlikely robberies. A few of the gadgets slipped in—like the tranquilizer gun in that first story—but the character quickly developed into something else. Unlike Bond’s cheerful girl-chasing, Nick remained faithful to Gloria, the woman with whom he lives. And after the first story, in which he dispatched the villains with the aid of a tiger, Nick rarely killed anyone.

In fact, as the objects to be stolen became more bizarre (the water from a swimming pool, a toy mouse, a baseball team, a sea serpent), I often viewed the stories as being wildly humorous. Sometimes their first drafts tended to reflect this humor in extreme amounts, and I have my editor Fred Dannay (Ellery Queen) to thank for keeping it within reasonable bounds.

A good deal of Nick’s background was to spring from my initial choice of his name. I liked the sound of “Nick Velvet” and it seemed a likely name for a series character—especially a smooth thief. But to get around a certain artificiality I explained that he’d shortened his name from something longer “that sounded like a cheese.” So his original name was Nicholas Velvetta, and he’d become an Italian-American without any conscious design on my part. Since I wanted him to be a product of New York, I chose the Greenwich Village area as his birthplace, in an era when “the Italian-American population still dominated the section against the encroachment of the bohemians.”

Nick is by nature something of a loner and even Gloria Merchant, the woman with whom he lives, has only a vague notion of his profession. In the early stories she believed him to be an industrial consultant who is away from home frequently to inspect proposed plant sites. Recently she has come to the conclusion that he performs some sort of secret government work.

In the introduction to
The Spy and the Thief
(Davis Publications, 1971), which collected some of the stories about Rand and Nick Velvet, I gave Nick’s birth date as March 24, 1932. This would make him forty-five years old as I write these words, and I don’t expect he’ll ever age much beyond that. Spies and policemen can grow old in style, actually improving their performance, but it’s hard to imagine an aging Nick Velvet.

I imagine Nick as ruggedly handsome, with black hair, brown eyes and slightly Italian features; a well built man just over six feet tall. Nick’s father was active in local politics, but Nick himself was a high school dropout who joined the army at eighteen and saw action at Korea’s Chongchon River (while his creator was sorting library books at Fort Slocum, N.Y.)

After the war Nick took night courses to complete his high school education, while working at a marina in Westchester County. He developed a lifelong love of boating, one of his few spare-time pleasures. Gloria, the only one who calls him Nicky, shares his love of boating. They live in a small city on Long Island Sound, close to the water, in an unpretentious house with a front porch where Nick can sometimes be found drinking a beer. The house is in an older section of the city, but there’s a relatively new electronics plant at the end of the street.

Nick rarely hires anyone to help with his thefts, preferring to keep the standard $20,000 fee for himself. Especially dangerous assignments sometimes bring $30,000, but despite inflation Nick’s prices have remained the same for twelve years. Though he sometimes poses as a reporter or writer, he generally uses his own name. Only recently has his reputation become widely known in criminal circles. Because of his Italian-American background, he has been hired more than once by various factions of the Mafia.

Though many of Nick’s adventures take place in the New York area, he has also operated in Texas, Las Vegas, Los Angeles, Washington, and Miami, and gone outside the country to Canada, London, Paris, Venice, Switzerland, and the Caribbean, among other places.

Since the major market for my Nick Velvet stories has always been
Ellery Queen’s Mystery Magazine
, perhaps it’s not too surprising that Nick should follow in the footsteps of the great Arsène Lupin in becoming something of a thief-detective. In the later stories especially, he is often called upon to solve a mystery in order to accomplish his mission or clear himself. In one story, “The Theft from the Empty Room,” he had to solve a mystery in order to know what to steal!

Of course since the very beginning there has always been an element of mystery connected with Nick’s adventures. Since he steals only valueless objects—never money or jewels or the like—the reader (and Nick) generally wonders how such a thing as a dinosaur’s tailbone or a circus poster or a cheap cuckoo clock could possibly be worth $20,000. In the end both Nick and the reader find out, the theft is successful, and Nick often brings a criminal to justice as well. It is mystery and crime and detection all rolled into one.

Almost from the beginning Nick Velvet has been the most popular (and most financially successful) of all my series characters. All but three of the first thirty-four stories appeared originally in
Ellery Queen’s Mystery Magazine
and many were also published in the British short-story magazine
Argosy
before it ceased publication early in 1974. Two stories appeared originally in
Mike Shayne Mystery Magazine
and one appeared only in the British
Argosy
. Its appearance in this volume marks its first American publication. (It was purchased for publication in this country by the Diners Club magazine
Signature
, but when that magazine stopped using fiction all rights to the story were returned to me.)

There has been frequent television interest expressed in the Nick Velvet series, and options have been taken on the stories from time to time. The problem in the United States seems to be that Nick is, after all, a thief who goes unpunished for his crimes. Television producers have pointed out to me that, by way of contrast, the Robert Wagner character in the 1967 TV series
It Takes a Thief
was actually in the employ of the U.S. government, which made everything all right.

Happily, French television does not worry about the moral question in Nick’s adventures. Five of the Nick Velvet stories were filmed in the south of France and shown on French TV during 1976, and others may follow. On the other side of the world, a collection of Nick Velvet stories was issued in January 1976 by the Japanese publisher Hayakawa, under the title
Enter the Thief
. And individual stories in the series have been widely reprinted in England, Norway, Sweden, West Germany, the Netherlands, Belgium, France, Denmark, Italy, Australia, Brazil and Japan. In this country two Velvet stories have been reprinted in
Best Detective Stories of the Year
.

The reader will find a complete bibliography of the Nick Velvet stories at the back of this book. But for those anxious to get to the stories themselves, I’ve kept you too long already.

A final word of thanks to Fred Dannay. He not only published most of these stories but also encouraged their writing, suggested revisions when necessary, and even inspired a few of the plots. Without him, and without
EQMM
, there would have been no Nick Velvet.

The Theft of the Clouded Tiger

M
OSTLY HE JUST LIKED TO SIT
on the front steps with a beer, watching the homebound workers from the electronics plant down the block, pleased that he wasn’t one of them. Sometimes, after supper, Gloria would join him on the steps to see the neighborhood fathers playing ball with their boys in the lot across the street, then watch them stroll down to the corner grocery for a forgotten loaf of bread or pack of smokes. It was a peaceful, settled neighborhood—that was why he liked it. No curious neighbors, no snooping.

“Huh?” He glanced up at Gloria, perched on the porch railing, swinging her long legs in graceful rhythm. She was a great girl, but she always wanted to talk.

“Nicky, what do you do when you go away?”

“Travel, like I told you. These companies hire me to pick new plant sites. There’s a lot of money in it.” He sipped his beer from the punctured can, wishing she’d quiet down for once and let him breathe in the evening air.

“When will they send you out again, Nicky?”

“Do you think some day we’ll be able to get married and settle down?”

He’d often considered marrying Gloria. Sometimes he could even imagine himself spending the rest of his life on this little street, walking up to the corner for beer in the evening. He could imagine it, but not for too long. “Some day,” he said, because that was the answer to everything.

It was later, almost ten o’clock, when the telephone rang. She brushed his hand from her thigh and rose in the darkness to answer it. “For you,” she called out.

He took the telephone and heard an unfamiliar voice ask, “Is this Nick Velvet?”

Nick smiled at the telephone. “I don’t meet people in hotel rooms. They’re only for sleeping and making love.”

“The park across from the hotel. By the fountain.”

“In the dark?” the voice asked, uncertain.

Bittersweet Magic by Nina Croft
Love_Unleashed by Marcia James
Rising Shadows by Bridget Blackwood
Anne Douglas by The Wardens Daughters
Nomad by Ayaan Hirsi Ali
La torre vigía by Ana María Matute
All About “All About Eve” by Staggs, Sam
Daysider (Nightsiders) by Krinard, Susan
Love in the Land of Fire by Brochu, Rebecca
How to Make Love to a Woman by Xaviera Hollander
Our partner