BOOK: Three Wise Cats
2.87Mb size Format: txt, pdf, ePub
Read Book Download Book
ads
“Are you still hurting?” Abishag asked. “Can we help by licking it for you?”
Kezia showed her two closest friends a woebegone face.
“I am now hideous,” she said to them and whimpered. “My appearance is no longer comely, and I am ashamed. I was a beautiful kitten, a lovely youngster, and a graceful lady cat. Now I am as uglyâas ugly as poor Alexos.”
“You need never be ashamed of your looks when you have saved a friend's life,” Ira said stoutly. But secretly he wondered whether his foster sister was being punished for her immense vanity.
“What have they tied about your head?” Abishag asked.
“Alexos said it would make my ear heal faster, but I do not think so. It hurts and burns, Abishag. Please do something!” Kezia cried.
The patient Abishag finally worked the bandage off Kezia's head, then she licked her torn ear until Kezia fell asleep.
“Will she be all right?” Ira asked Abishag as they left Gracus's cabin to go claim their usual fish for dinner.
“I think she will be just fine,” Abishag said. “And if the cut becomes infected, Polla will tend to her ear, for she loves Kezia, too.”
I wish someone cared for me as Alexos does Kezia,
Abishag thought sadly.
He was trying to defend her from the snake, rather than killing the serpent because of the threat to himself. And Gracus and Polla dearly love Ira, their “little soldier.” I wish someone loved me. I miss Ptolemy, and even the old astronomer. I wish our journey was over. I want to go home . . .
That night Gracus had another dream of the cats. He had gone to his bunk in the cabin thinking about Alexos and the snake.
He is astonishingly afraid of serpents,
Gracus thought.
I wonder what has happened in the past to make him fear them so.
In his dream, he saw past events repeated: Ira, hurt and lying in the dusty road; Kezia, half drowned when Citus rescued her after Abishag had clung valiantly to her to prevent the tabby from being swept away in the current; and now Kezia again, rescuing Alexos from sure death by snakebite. Then it seemed he entered a path or a corridorâhe saw the three cats walking away from him. When he called them, they ran from him, not stopping to look at him or even turning their heads. A long, long time passed in his dream, and yet he still searched, looking at each small black cat when he saw another one, searching for Ira with his crooked leg. He woke after a restless night and lay there sweating.
The gods obviously want them to stay together. But then why would I search for only the one? My heart knows that I am fondest of my “little soldier,” true, but I would not separate the three from one another. 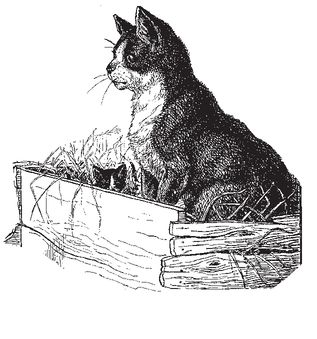 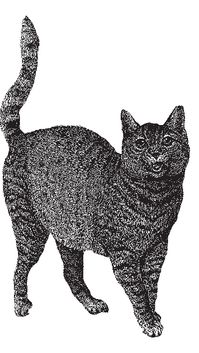 Asmodeus, crouched in the thickest shadows, spat and curled his lip.
“He may wish to walk at times.” My stomach heaves at the simper! Curse them! I must plan carefully so I may also ride and not walk. I would dwell most happily in only one of those palaces that continually are promised to these undeserving, juvenile upstarts. Prophecies! Bah!
Once back in their cabin, Gracus soon fell fast asleep. Moving quietly so as not to disturb him, Polla sat on the floor and held Ira and Kezia in her lap while Abishag leaned against her knee. “Miss you I shall, most painfully,” she told them softly. “Were I not but an ignorant slave, I could add my own predictions for you, as I know them in my heart. I dare not speak them aloud, lest I give you hopes or fears of a future that may not come to pass. At least you will see wonders.”
She turned to Abishag and spoke into her ear. “You will return to love someday. Keep my words and let them guide you when you despair.” She placed her hands upon her abdomen and smiled at the black cat. “My home country says women who grow heavy with child see things other women do not. I will have a child in seven months, and in my thoughts, I have seen five fat kittens tumbling and playing about your paws. Their fur is strangely marked, but they will bring you great joy.”