BOOK: Three Wise Cats
5.66Mb size Format: txt, pdf, ePub
Read Book Download Book
ads
Kezia shuddered, he looked so awful. “Do hush,” she said, turning her head slightly. She was looking for help. “I'm not listening to anything you have to say.”
Where is Abishag? She's killed more rats than I have. How hard do I strike him? And where, exactly?
“But it's jewelry,” Asmodeus said. “Jewels to match your eyes.”
I've heard human males say that to females
.
Let us see if it works on conceited cats.
The young cat turned toward him again. “What about my eyes?”
“They are akin to grand jewels, lovely one. Wouldn't you desire something that would make them sparkle like a star?”
Kezia put her entire weight on her paw, keeping Asmodeus pinned to the dirt floor of the storehouse. 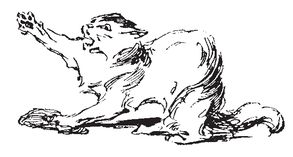 GRACUS HAD NO idea why he had been summoned from his meal to the commander's private quarters. But the uneasy feeling within his chest grew as he hurried through the open door and saw his tabby cat, crouched in a leather box with the lid partly covering the opening.
“What is wrong, Legatus?” The commander's slave woman, Polla, silently stood behind her master's chair.
“Why is your catâfor I am told it is your catâwearing my slave's bracelet about its neck? Is it a tasteless prank?”
Inwardly Gracus sighed. No matter if someone in his company's ranks had done this as a joke, it still had fallen upon his head. “I do not know, sir. If you would permit me, I will remove the bracelet and return it to its rightful owner at once. And I shall question my men.”
The commander raised one eyebrow and his patrician upper lip in a sneer. “You have not placed her bracelet upon the animal?”
“No, sir. I had not even heard of the thoughtless prank until this moment.”
The slave Polla, beautiful and tall, whose thick blond braid hung down her back, hesitantly stepped forward and stood at her master's side.
“I am one who did thisâprank?âyou speak of,” her voice was guttural, her Latin rough and uneducated.
The commander twisted his head to stare up at her. “Why? Did you think I give you baubles as playthings for vermin catchers? Or that the bracelet, which cost me three hundred sesterces, was worthless?”
“No, master. I grieve for my home. There I had cat, since I was little girl; young. I put bracelet on cat and admire cat; cat run away. It was a stupid thing. I am sorry.”
The commander returned his stare to Gracus. “Obviously all women are foolish beings, who think only of playing and gossiping. Gracus, strip that cat of the bracelet and I will hear no more of this.” He stood and strode from the room.

Cat Burglar in Training by Shelley Munro
Allie's War Season One by JC Andrijeski
Attractive Nuisance (Legally in Love Book 1) by Griffith, Jennifer
Along Came a Tiger by Jessica Caspian
Indulgence in Death by J. D. Robb
Seems Like Old Times by Joanne Pence
Shadows of Self by Brandon Sanderson
Cody Walker's Woman by Amelia Autin
Violet Tendencies by Jaye Wells
So Over You by Gwen Hayes
Our partner