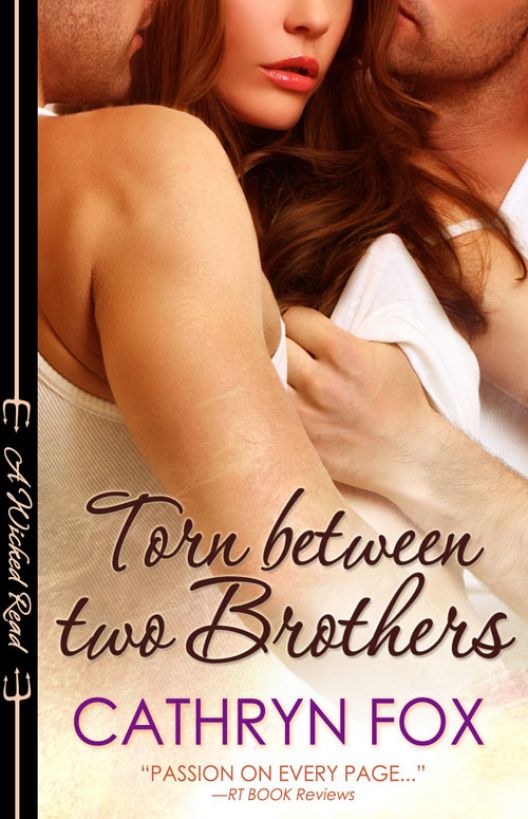 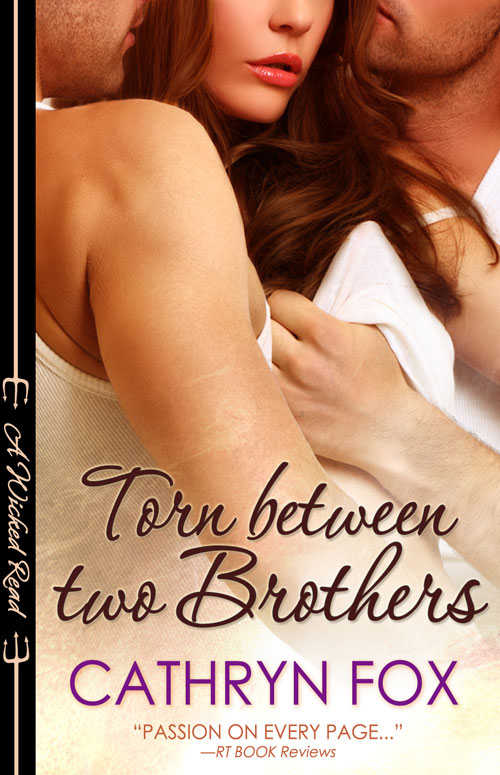 Lauren Gray
loves everything about Adam Wilson, everything from his zest for
life to his roguish good looks and his wild, wicked ways in bed.
She can’t, however, deny that his absence during the week poses a
problem for her, but as a commercial pilot, he spends his weekdays
flying. Nor can she deny that while she loves their frantic
lovemaking sessions, there are times when she’d like to shift
things into slow gear.

When she
discovers Adam home during the weekday, draped in darkness and
asleep in his bed, she isn’t about to question her good fortune.
She slips between the sheets with him and attributes his achingly
gentle touch and soft, sensuous kisses to his mellow state. Except
come morning she realizes that it wasn’t Adam who was searing her
body with his slow, sultry lovemaking, it was his brother Garret—a
race car driver who, unlike Adam, is home during the week and
uses a gentle hand in the bedroom.

Lauren can’t
help but think that separately the brothers are amazing, but a
combination of the two makes the perfect package. And when this
good girl realizes she’s torn between two brothers it has her
thinking about breaking all the rules…

Published by Cathryn Fox at Smashwords.

Discover other titles by Cathryn Fox at
CathrynFox.com
.

To the Wicked
Writers. You gals rock!

“I
think you should dump his sorry ass.”

Lauren Gray
groaned inwardly and took a much needed sip of her apple martini
before saying, “Come on, Shi, how many times do I have to tell you
that I like him? I really, really like him.”

Lauren’s best
friend, Dr. Shiloh Foster, gestured for the bartender and Lauren
took that time to glance around the cozy piano bar. She perused the
low lighting, the romantic ambiance and the other patrons scattered
throughout, many of whom were her colleagues—men and women coming
together for a little after hours mingling, their clandestine
affairs masked by the lounge’s darkness.

Since the bar
was conveniently located only a block from her work, it regularly
filled with doctors, nurses and other hospital staff, most
searching for a way to wind down after a hard night on the floor.
She stole a glance at the piano player who was crooning a soft
ballet in the far corner. Even though his soothing voice drowned
the hushed conversations around them, Lauren leaned toward her
friend and spoke in whispered words, wanting to keep her private
life, well…private.

Shiloh arched a
challenging brow. “Yeah, when he’s there.”

Lauren drew a
long breath and let it out slowly. Okay, so Shiloh was right and
that was the problem. She’d been dating Adam Wilson for a little
over eight months now and while she liked everything about him,
from his playful demeanor to his zest for life, his roguish good
looks, and his wild antics in bed, she couldn’t deny that his
absence during the weekdays posed a real problem for her.

Still, he was a
man with integrity and values, so unlike the other men she’d dated
in the past, and he treated her with kindness and respect. As much
as she hated being alone throughout the week, she wasn’t about to
dump his sorry ass
because his job took him out of
province.

When Adam was
home he showered her with attention and affection, and put her
needs and desires first. He was always fun and spontaneous and kept
their relationship fresh and exciting by whisking her away to
exotic locales where he’d spend the weekend catering to her every
need, and bringing her wildest fantasies to life.

Truthfully, she
loved everything about Adam, and while she enjoyed every minute in
his arms and in his bed, what she didn’t like was being alone all
week. Unfortunately, the luxury of working close to home was out of
his control. As a pilot for one of the big commercial carriers, he
spent his weekdays flying across the country. He returned home on
Friday evening only to leave again early Monday morning. But who
was she to complain about his career? As an emergency ward doctor
she knew all about odd hours and crazy work schedules. But she
couldn’t deny that she wanted companionship through the week too.
Someone to snuggle up with at night, someone to watch mind-numbing
reality TV shows with, someone to wake up with and someone to give
a goodbye kiss to in the mornings before she headed off to
work.

“You know I’m
all about Adam,” Shiloh said, cutting into her thoughts as the
bartender replenished their drinks. “Hell, I’d give my eye teeth
for a guy like that. But you’re not like me, Lauren,” she pressed,
her green eyes moving over Lauren’s face with genuine concern. “I’d
totally be content to have him around only on weekends—Lord knows I
like my space—but I know you want more out of a relationship and
you shouldn’t have to settle for anything less.”

“Come on,
Lauren. It’s hump day, and you’re sitting at a bar having cocktails
with me,” she paused, gave a sassy wink, then added, “Instead of
having…
cocktails
, with him.”

Lauren took a
big gulp of her drink, and when her head wobbled slightly—the
alcohol hitting her hard since she hadn’t stopped working long
enough to grab dinner—she decided it was time to call it a night.
But before she made her way to the train, she needed to walk the
three blocks to Adam’s place and take care of Nate, the mischievous
feline that Adam’s brother, Garret, had left in his care while he
was away racing. Adam planned to kennel the cat during the
weekdays, but Lauren didn’t mind seeing to his needs every few days
and suspected Garret would prefer it that way, too. As she thought
about Garret, she found it hard to believe that she’d been dating
Adam for eight months and had yet to meet his brother, especially
seeing how close the two guys were. Adam talked about his brother
so much, Lauren felt as if she already knew him.

The door behind
them banged open and they both turned in time to see Blake Canyon
the hospital’s newest intern—a guy who had all the single girls,
and some of the not-so-single girls, tripping over their tongues.
He entered and looked around, his sexy glance brushing over Shiloh,
the heat in his eyes enough to melt her surgical equipment.

Chuckling, and
deciding she’d had enough, Lauren slid her glass along the mahogany
bar top, dropped a few bills onto the counter and grabbed her coat
from the back of her stool.

“Coming?” she
asked as she shrugged into her knee length wool jacket and wrapped
her knitted scarf around her neck.

“Soon, I hope,”
Shi said with a grin and it didn’t take a brain surgeon to know the
subject had once again dipped south. On that cue Lauren grabbed her
purse and briefcase and made her way outdoors while Shiloh picked
up her drink and disappeared into the crowd.

The cool wind
wrapped around Lauren’s body and she tightened her scarf around her
neck as the winter’s first snow began to dust the city’s sidewalks.
Large flakes danced under the streetlamps and glided silently to
the ground. Lauren slowed her steps and absorbed her surroundings,
taking in the beauty of the night as well as all the couples who
were out for a romantic, evening walk. As she inhaled the crisp
evening air, she felt a pang of loneliness inside her, and wished
Adam was by her side, there to hold her hand, touch her intimately
and enjoy the gorgeous night with her.

She blinked a
fat snowflake from her lashes and hustled down the sidewalk, not
wanting to dwell on those disheartening thoughts any longer. A few
minutes later she pushed open the door to Adam’s condo, and nearly
tripped over a purring Nate as he wrapped himself around her
legs.

“Hey boy.”
Lauren dropped her briefcase on the floor, patted the furry feline
and asked, “Hungry?”

Nate purred
louder and when she glanced up and noticed the shredded newspaper
strewn across the hardwood floors she laughed and tapped his nose.
“I think we need to get you a friend of the opposite sex to keep
you entertained during the weekdays.” Lauren couldn’t help but
think she could use the same thing.

At that
scandalous thought she flicked the hall light on and went straight
to the kitchen. She dropped her purse onto the counter and prepared
his food. After refilling his bowl and refreshing his water, she
wandered around the quiet apartment and cleaned up Nate’s mess. She
picked a sofa pillow up off the floor and pressed it to her nose.
The warm earthy scent of Adam impregnated the fabric and raised her
hunger for him. Her nipples tightened almost painfully and her body
shuddered, her entire being longing to be in his arms tonight.

When Nate
finished eating, he jumped onto the window sill and scratched at
the glass pane.

“What is it,
boy?” Leaving the pillow behind, she stepped up beside Nate and
laughed when he continued to swat at the falling flakes as they
melted on the warm pane. As she stared at the street, it occurred
to her just how big the flakes were and just how quickly they were
accumulating on the ground below. She was dressed in her high
heels, having changed at the hospital before going to the lounge,
and she wasn’t prepared for snow—the weatherman certainly missed
his mark this time. Thoughts of going back out in the cold made her
cringe. Adam certainly wouldn’t mind if she stayed over, and since
she did have an extra pair of scrubs at the hospital…

She rubbed
Nate. “What do you think, boy? Would you like the company?” When
Nate purred and licked his paw, she took that as a yes. As she
warmed to the idea of spending the night in Adam’s bed, albeit
alone, she decided a hot sudsy shower to wash away the busy day and
help her relax was in order first.

Lauren stripped
off her clothes and left a trail in the hall as she made her way to
the bathroom, turned on the shower, and climbed in. As the warm
spray fell over her body, she grabbed Adam’s body wash and squeezed
a generous amount onto her hand. She rubbed it over her damp flesh
and as the fresh, familiar scent fragranced the air her body grew
needy for him. She ran her hands over her breasts, stopping to
pluck at her nipples, while she widened her legs to let the hot
stream spray her bare pubic area and caress her swollen clit.

Lone Star Renegades by Mark Wayne McGinnis
In the Hall of the Dragon King by Stephen Lawhead
Exiles of Arcadia: Legionnaire by James Gawley
One Night: Denied by Jodi Ellen Malpas
Spider in the Corner of the Room (The Project Trilogy) by Owen, Nikki
Over My Head by Wendi Zwaduk
Consuming Passions: Leisure and Pleasure in Victorian Britain by Flanders, Judith
Here There Be Dragonnes by Mary Brown
Tangled with Lust: A Life Changing Lesbian Experience by Jagger, Jennifer
Echoes of the Great Song by David Gemmell
Our partner