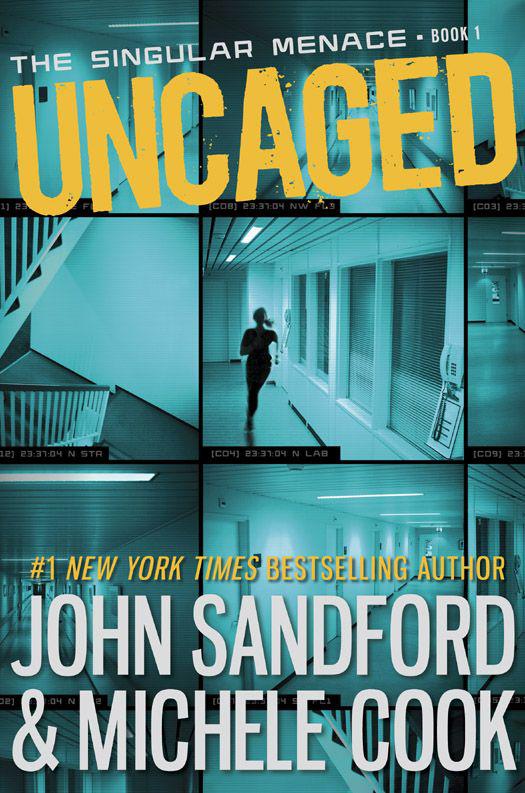 The naked girl stared at herself in the motel mirror, a little sick with what she was about to do. She was slender, with muscles in her arms and shoulders, and red hair that fell to her waist. A scratch trailed from her hairline down to one eyebrow; her lower lip was swollen, raw on the inside where her teeth had cut into it. She had the salty taste of blood in her mouth.

She’d just gotten out of the shower, where she’d scrubbed someone else’s blood off her clothes and body.

Now for the hair.
Has to be done
, she thought.

She shook out the Walgreens bag. A pair of shears, a comb, and a box of Clairol Nice ’n Easy clattered down onto the Formica counter beside the sink. Behind her, the gray, wolflike dog was on its feet, watching her, picking up on the stress; the dog made a rumbling sound in its throat.

She turned and said, “You’re gonna get it too.”

The motel was a dump, built a half century earlier, twenty rooms
stretched along a broken-blacktop parking lot. The room smelled of cigarette smoke, sweat, urine, whiskey, and disinfectant. The windows were glazed with dirt, and the venetian blinds were yellow with age. The bed was short and lumpy, covered with a shiny maroon bedspread that she didn’t want to touch.

Instead of throwing her clothes on the bed, she’d hung them on a hook by the shower. The wooden handle of a wicked knife stuck out of a sheath tucked inside the back pocket of the jeans.

An ancient television sat on a corner table. It didn’t work. The room had one solid appliance: the big chain on the door, which, she thought, it probably needed.

The motel office was down at the far end of the building. When she’d walked in a half hour earlier, the clerk, a too-thin, windburnt man in his forties with a hard, bobbing Adam’s apple, had said, “We don’t usually take dogs.”

She ignored the comment. “How much for the room?”

He looked her over. She wore a hoodie pulled down over her forehead, and sunglasses. The bottom part of her face was pretty, except for a bruised lip. Her only luggage was a man’s leather briefcase.

“Could be free, depending,” he said, trying to be cool about it.

He failed. The office looked like it hadn’t been cleaned since the place was built, with paper trash everywhere. A dusty box of Snickers candy bars was propped next to the cash register, the same cash register that had a trucker’s bumper sticker stuck to it that read
ASS, GRASS OR CASH, NOBODY RIDES FREE
. Somebody had crossed out the
RIDES
with a Magic Marker and written above it
SLEEPS
.

“I don’t want free,” the girl said. She dug a twenty-dollar bill out
of her jeans, held it up with two fingers. “For me and the dog. I only want the room for a couple of hours, for a shower and a nap. I don’t need a receipt.”

He looked her over again, then reached under the counter and produced a key on a tag. “You’re in room eighteen. Be out by one o’clock. You bring in any guys, I get a cut.”

“Won’t be any guys,” she said. She snapped the bill down onto the counter, took the key, and was out of there.

Standing naked in front of the mirror, she picked up the shears and ran her fingers through her hair. No more sentimental moments; she started cutting. When she was done, long curls of red hair lay in the sink, like streaks of blood.

Now for the color. She took two bottles, a tube of conditioner, and some gloves out of the Clairol box, read the instructions, poured the color into the activator, and began working the black dye through her hair. Because her hair was so short, she’d need less than half of it. Behind her, the dog whimpered.

When she was finished, she picked up the comb, got the bottle, and said, “C’mere boy.”

An hour later, they were done. She pulled on her damp shirt, put the comb and shears in the briefcase, and used the last of the motel
towels to dry her hair and the dog’s. He was contributing a whole new stink to the smelly room.

“Let’s get your collar back on,” she said. “You look undressed.”

The dog had been a silver gray. She’d used the comb to drag the color through the hair on his forehead, back, and sides, but hadn’t tried to get all of it. He looked pretty good in black and gray: like an off-brand German shepherd.

She looked off-brand herself. Different. So different that after she buckled the collar on the dog, she turned and examined herself in the mirror for a long minute, getting used to it.

Shay Remby was gone. Who was this new girl?

She moved the sheath and knife to the small of her back, pulled on her hoodie, and picked up the briefcase. The dog was already at the door. She clipped on his leash, tossed the room key on the table next to the TV, and then they were out of the motel and walking down the street, moving fast.

There had to be good parts of Stockton, California, she thought, but this wasn’t one of them. The streets were rough, the buildings decrepit. Broken windows were everywhere; the ones that weren’t broken were covered with bars or heavy mesh screens. A gang was busy tagging the bare concrete walls and every other flat place they could find.

She turned the corner and saw Spartan Assembly straight ahead. She had no idea what was done there. A factory of some kind, she thought, with fifty cars parked outside. The best place to hide a car, she’d learned in the last few days, is a crowded parking lot.

“You’re gonna smell up the Jeep,” she said to the dog. “I love you anyway.”

The dog rumbled at her.

The black Jeep Rubicon, almost new, sat in the middle row of the
parking lot. She popped the door, let the dog jump into the driver’s seat, then pushed him over to the passenger side. A moment later, they were moving, the girl and the dog turning their heads to look out the windshield, the side and back windows.

On guard against the world.

The leader of the group had the Taser, a snub-nosed stun gun that looked like a miniature Super Soaker. There were six baseball bats and two commercial bolt cutters scattered among them, hung on loops beneath casual jackets. A seventeen-year-old boy, muscled up from white-water kayaking, had the ten-pound sledgehammer. They all carried ski masks and heavy work gloves.

Twelve young people altogether, male and female in equal numbers, most still in their teens. If they were stopped by the police, there would be no defense for the gear, so they were on edge, jumpy, looking around as they walked.

But the distance from the cars was short, and the exposure was brief. A risk that had to be taken.

They had one big fence to get through.

The fence was twelve feet high, with razor wire on the top: they
couldn’t climb it. The bottom of the fence was set in a band of concrete: they couldn’t dig under it. They couldn’t cut through it, or even touch it, because of a spiderweb of motion alarms.

There was one possible entry, at a back gate. The gate, which was almost never used, was secured with an electronic lock that opened only with the right magnetic card.

They didn’t have one of those. They did have a deck of obsolete cards, kept by the son of a former researcher. The boy was a computer hacker who’d studied the cards for years and claimed to have found the algorithm by which the codes were updated.

Eventually, one of the women in the group had paid attention to what he was saying. She’d led him through cyber attacks on several animal lab facilities, and the damage had been impressive. The woman took the high school senior as a lover to tie him more tightly to the group.