Read Until the End of the World (Book 2): And After Online

Until the End of the World (Book 2): And After

BOOK: Until the End of the World (Book 2): And After
>>DOWNLOAD HERE >>READ ONLINE NOW
ads 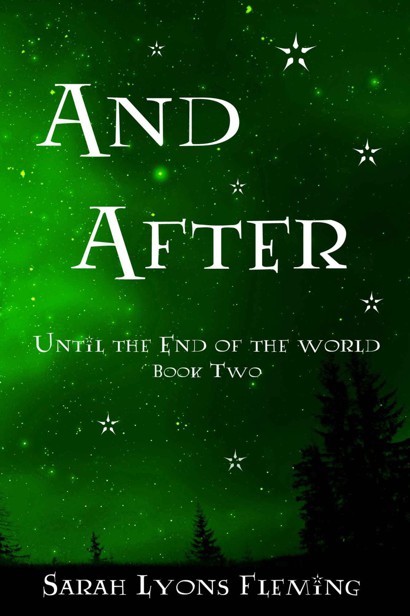 Until the End of the World

All Rights Reserved. No part of this book may be reproduced in any form without permission in writing from the author, except as used in a book review. Please contact the author at [email protected]

For Will, who knows that the way to my heart is through water filters and crossbows.

And who loves me in spite of (or maybe because of) it.

It’s still dark when I wake for my breakfast shift at the restaurant—that’s what we call the dining area here at the farm. Most people dread breakfast, but I like it. This past year has brought me a new appreciation of the dawn. I like the way it rubs off on me, the way it makes me feel quiet and peaceful.

What I don’t like, however, is the cold, and it’s plenty cold in here. I push down the blankets and shiver when the air hits my skin. The farmhouse is always freezing by morning, no matter how much wood they load into the furnace. I drape a scarf over the light when I get back from the bathroom, so as not to wake Adrian, and inspect myself in the mirror. My hair is its usual puffy morning mess. I smooth it down and wind it into two buns. I might not have to keep it out of reach of zombies here at Kingdom Come, but I’m pretty sure no one wants a strand of long, brown hair in their oatmeal.

I walk to Adrian’s nightstand to retrieve my hat. I don’t kiss him goodbye; Adrian is not a morning person, despite his many tranquil qualities. He’s sleeping bare-chested, with the blankets at his waist. I don’t know how he can stand it. We wage a silent, half-asleep battle every night in which he kicks the blankets off and I pile them back on.

Adrian’s fingers wrap around my wrist. I drop my hat and quash my scream. “Holy crap! You scared me.”

“Sorry,” he says, his voice sleepy. “How do you get prettier every day? What’s your secret?”

I return his smile and ignore his question. “You’re a cheery fellow this morning.”

“Because I got to see you. You didn’t answer my question.”

Adrian’s hair is rumpled and he has pillow creases on his cheek, but with his green eyes, olive skin and strong features, I think he’s the one who’s beautiful.

“Well,” I say, “you’ll be thirty soon, and your eyesight fails just a tiny bit more every day. It’s an illusion.”

He lets go of a dramatic sigh, the one he throws around when I won’t act serious. “Can’t you just take a compliment?” I pull away, but he tightens his hold. “Take the compliment.”

His dimple is at maximum depth now, although his calloused fingers haven’t loosened a bit. “And now answer the question.”

He releases me with a chuckle. “That wasn’t so hard, was it?”

“It was horrible.” I brush back his dark hair and kiss his forehead. “I can’t believe you made me do that. See you at breakfast?”

“You wish,” I say with a laugh. We’re low on eggs at this point in the winter; most of the eggs are in the incubators, making new chickens. “Oatmeal. Buckets of oatmeal. I’ll make it just for you.”

I tiptoe down the creaky stairs and into the night. My boots crunch on the leftover snow, of which we had a record amount this past winter. Not that anyone keeps records anymore. A lot has melted, but the enormous piles that have been shoveled to the side all winter might need a week or more.

The restaurant is off to the right—a barn-like building whose windows glow with the warmth of electric light. We have real bulbs in the farmhouse too, while people in the cabins and tents have to make do with oil lamps, candles or battery-powered lights. I pull off my boots once I’m through the back door and wave to Mikayla, who’s started the fires in the wood cookstoves.

She sets a giant bag of oats on the floor and smiles. “Morning, Cassie.”

The kitchen is a huge room with a pantry, three wood cookstoves and a long counter in the middle for food prep. I hold my hands over one of the stoves and soak in the warmth. Mikayla’s ringlets have already escaped the confines of her ponytail and stick to her temples. Her skin has a golden glow and her cheeks are flushed from the heat. That’s another reason I love breakfast shift—by the end of it we’re in tank tops and bare feet like it’s summer.

“Want to start the oatmeal?” she asks.

“Sure.” I retrieve a giant pot and grab the milk out of one of the freezers that are modified to run as refrigerators on the solar.

“We’ve got a bunch of eggs,” Mikayla says. “Enough to make frittatas. I’m so excited!”

She bounces around, collecting ingredients. Only Mikayla could be this excited about eggs. She was on the farm before Bornavirus destroyed the world; she’d planned to start her own farm one day.

Ben and Adrian were partners in what was a sustainable farm called Kingdom Come Farm. It’s now Kingdom Come Safe Zone, although we’re still a farm. You have to be a farm these days, if you want to eat. Fully-stocked grocery stores are a thing of the past. Mikayla and Ben began dating in the fall, and now they’re inseparable.

“Guard duty. He’ll swing by after. He made me promise I’d hide some frittata for him. Hey, are you going on the final run? They found a group of Lexers over to the west.”

We’ve spent the winter killing all the infected we could locate. We’d waited, fingers crossed, until winter came, hoping the infected would freeze. And when they did, we made it our mission to seek them out and finish them off. We’d also hoped that the cold would destroy them once and for all, but it turns out there’s a fifty-percent survival rate when thawed, based on our own experiments and reports from a few other Safe Zones. It’s better than nothing.

I put on water to boil, set home-canned fruit on the serving tables in the dining area and then start on today’s bread. I love making bread, although making it in such large quantities is more work than pleasure. We have it down to a science: it’s measured, kneaded and tucked by the heat to rise by the time Toby and Jeff fall through the door. Jeff has a crooked ponytail and bags under his eyes, and Toby’s blond dreadlocks are rattier than usual.

“I’m too old to be sleeping in that tent,” Jeff says. He turns to Toby. “Unlike you, I am no longer twenty-six. You young whippersnappers may be able to stay up all night, but we old folks need sleep.”

He’s only in his forties, but I know what he means. The guys in that tent are all lovely human beings, but they’re loud. “I don’t blame you,” I say. “I wouldn’t want to be in there.”

Toby points a finger. “You thought you could hang, old man, but you were mistaken.”

Toby was an employee on the farm before Bornavirus. He’s so laid-back he can appear lazy, but he knows the farm and all its animal and vegetable residents intimately, including the once-illegal herbs he grows just outside the fence. He might prefer hanging out to work, but he does more than his fair share, and he’s good on patrol. Jeff mutters something and pushes Toby into the dining room to set up tables and chairs.

A moment later, Penny rushes in and hangs her coat on a hook. Her dark hair is in a haphazard bun, and her eyes are puffy with sleep. “Sorry I’m a little late. James practically had to push me out of bed.”

Penny walks to where I’m stirring oatmeal and wipes her fogged-up glasses on her shirt. “I’m late,” she says with a frown.

“Geez, Pen, you’re allowed to be late once in your life.”

She pushes the antique glasses up her nose and whispers, “No, I’m
late
.”

“Shit.” I drop the spoon into the pot. The oatmeal sucks it down like quicksand. I try to fish it out without taking my eyes off Penny. “Crap.”

She nods at my eloquence and takes a deep breath. Her normally light brown skin is almost as pale as mine. I inspect her for any other signs of pregnancy, but her soft curves haven’t changed in any significant way.

“How late? How do you feel? Are you freaking out?”

Penny points at where I’m slopping oatmeal all over and runs a shaky hand along her glasses’ earpiece. “I’m over a week late. I’m tired and, like, not quite right. And of course I’m freaking out!”

“So how can we find out? Didn’t they used to inject rabbits with urine? We can’t do that. There are rabbits here, bu—”

“Well, we could murder a rabbit,” she says with a look that tells me I’m insane, “or I could go to the infirmary and get one of the tests. James and I are going to get one after breakfast. Maureen’s filling in for me at school.”

“That probably makes more sense.” I laugh and squeeze her arm. “I’m excited. Can I be excited?”

Sometimes I think about a sweet, tiny baby that Adrian and I have made. But then I think about how I would have to protect it. How I would have yet another person to worry about. How babies cry and make noise and you can’t tell them to keep quiet. And then I stop thinking about babies. Besides, I’ve got Bits.

This is the next best thing, though, so I focus on the positive: A tiny Penny-and-James baby. Quite possibly the smartest baby ever. I whisper this to Penny when she passes on her way to the pantry, which gets me an eye roll and a giggle.

By the time Ben and Dan arrive, the dining area is filled with people eating oatmeal and day-old toast. Only the early birds and those in the know got frittata this morning. And me—I think I ate four eggs’ worth. Barnaby, a dog with some Golden Retriever but no brains to speak of, follows them in. He sniffs my leg, tail wagging madly, and then plops his butt on my foot where I wash dishes at the trough sink. There aren’t many dogs around, since Lexers eat animals. Maybe a lot of dogs were eaten by their owners before they figured out they should have run.

“I heard I could score some real eggs,” Dan says.