Read On the Prowl Online 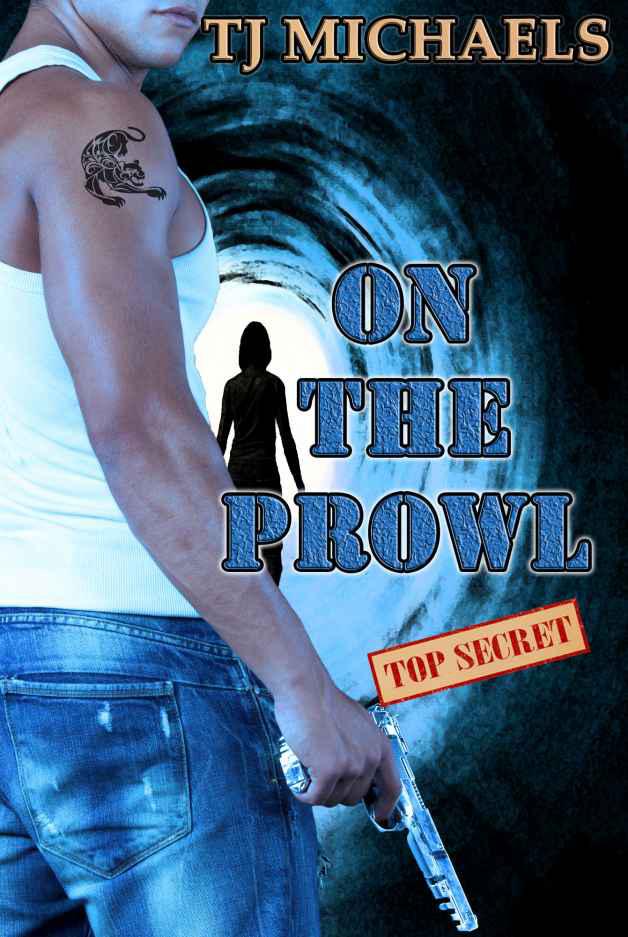 ABOUT THE E-BOOK YOU HAVE PURCHASED: Your non-refundable purchase of this e-book allows you to only ONE LEGAL copy for your own personal reading on your own personal computer or device. You do not have resell or distribution rights without the prior written permission of both the publisher and the copyright owner of this book. This book cannot be copied in any format, sold, or otherwise transferred from your computer to another through upload to a file sharing peer to peer program, for free or for a fee, or as a prize in any contest. Such action is illegal and in violation of the U.S. Copyright Law. Distribution of this e-book, in whole or in part, online, offline, in print or in any way or any other method currently known or yet to be invented, is forbidden. If you do not want this book anymore, you must delete it from your computer.

This book, originally published as Primed to Pounce, was my debut novel. It was the first book to ever be contracted and published and was the beginning of my career as a professional author. It received a wonderful reception and received great reviews. I still love this book, but I must admit that when the rights reverted from the publisher back to me my first thought was to rewrite it. After some consideration I realized that I’ve grown as a writer and rewriting this book would basically result in a completely different style and story. So, please enjoy this book in its original form.

With the greatest respect,

All Delaine heard was “Yada, yada, yada, yada…” as she thought of her husband, well, her now ex-husband, for the trillionth time since he’d left her.

What the hell kind of man sends his wife an e-mail to tell her he’s leaving her?

It’s been a year and I still can’t believe what he did
, Delaine fumed inwardly, remembering that fateful morning as if it was yesterday. Her husband Gary had kissed her on his way out the door for work. Hell, he’d even told her to have a wonderful day. The last thing she’d expected when she arrived at her office was an e-mail from him giving her a two-day notice of his intentions to move out.

Delaine had been hurt and confused after reading his long rant of a jabbing e-mail. But when the light bulb in her head flipped on she’d been livid. No one simply blinked their eyes and had a whole new life, a new apartment and a new girlfriend without a little prep time. The bastard had planned his cowardly actions for weeks, maybe even months.

But unlike Gary, Delaine didn’t have the option or desire to abandon her family. So she’d held it together, saw their twins off to college and was on her way to North Carolina on a new assignment for her agency.

She caught her reflection in the window. Dark brown, almond-shaped eyes twinkled intelligently in the dim overhead light. A slight smile graced her full, heart-shaped lips. She looked like a big kid in her baseball hat, leather bomber and jean shirt. Her cinnamon skin was flawless, and she couldn’t see a single, easily identifiable wrinkle. In top physical shape and curvy in all the right places, at thirty-seven Delaine looked ten years younger. And her husband had left her because she had a habit of leaving her clothes on the bed? Shaking her head on a snort, she yanked her hat down over her brow and scooted down into the cushions of the leather chair. Well, at least she was headed to Charlotte first class.

She gazed out the small window at a beautiful pink and purple sunset, but all she saw was her hands wrapped firmly around Gary’s neck as she squeezed. Hard. The image faded as Delaine’s spirit guide whispered soothingly in her mind.

*
He is not worth the effort, Suta Winyan. He was not a worthy mate
.*

‘I know, Sapa, I know,’ Delaine sighed inwardly, sending the tired thoughts to the black mountain lion that shared her conscience.

*
The Great Spirit says this is meant to be. Good things are coming to you
.*

They landed without a hitch and Delaine was standing at baggage claim within fifteen minutes of deplaning. A loud siren blared, signaling the start of the conveyor belt just as a graying older gentleman, dressed in a classic black chauffeur jacket, white shirt and black trousers, approached. The sign he carried held her initials written in bold, black letters.

Delaine nodded with a friendly smile at the man’s welcome attempt at discretion. After all, she was undercover. It wouldn’t do to have her name plastered on a sign for all to see.

“My name is Timmons, and I’ll be your driver tonight,” he said, with a tip of his hat and a slight bow. “I’ll retrieve your luggage and we’ll be on our way shortly, ma’am.”

Delaine waited patiently in the arriving passenger area while Timmons brought the car around—a white Crown Victoria limousine, courtesy of her company, Aegis Analytical. Her belongings were quickly stowed in the spacious trunk, and a very polite Timmons settled her into the spacious backseat. Without a word, he passed her a large sealed manila envelope, climbed into the driver’s seat and they were off.

She flipped on the reading lamp and kicked off her shoes. The big backseat was perfect for sprawling, and Delaine mentally thanked her boss, Geri, for arranging a private car to take her to her new home.

Delaine allowed her tired body to sink into the plush leather cushions then carefully opened the flap on the envelope. It was stuffed with several items, some she would need immediately. She pulled out the keys to her new house and a note from her boss confirming the date of delivery of the rest of her belongings. Also the spare keys to her car, which she’d gone without for the past couple of weeks so it could be shipped ahead, and another note from the transport coordinator—the car was now parked in her driveway just waiting for her to arrive.

The envelope also contained the results of a few special strings Geri pulled in consideration of Delaine’s unexpected status of single mom—a bank receipt for a hefty moving bonus, already deposited in a bank in Charlotte, and airline e-tickets for her children, who would fly to Charlotte for their Christmas break instead of Denver. Thanks to Geri, the exchange of the plane tickets hadn’t cost a dime.

There was a second manila envelope buried in the bottom of the first. Delaine tucked it into the side pocket of her carry-on bag. She knew from experience that this one pertained to her mission. She’d wait until she was in the privacy of her home before she opened it.

Delaine flipped the reading light off, leaned her head back against the seat and peered out the window. It wasn’t all that late, but the winter days were short. If she’d been thinking, she would have flown in earlier so she could see the surrounding landscape. It was completely dark out and she couldn’t see a thing except the lamps illuminating the highway.

As they sped along the interstate, Delaine felt a strange mix of apprehension and giddiness. She called out across the psychic bond she shared with her spirit guide and Sapa immediately came to the forefront of her mind. The black lioness was always in her head, able to communicate thoughts and feelings. When directly summoned, Delaine could actually see the image of the big cat behind her eyes and even call her onto this plane in a physical form. It was pretty neat to watch the expressions cross Sapa’s face when she’d been summoned in the middle of pouncing on some imaginary prey. But tonight, the big cat felt Delaine’s anxiety and sought to comfort her charge.

*
Do not be afraid. You will be happy here, and I will always be with you,
* Sapa said calmly.

‘Of course,’ Delaine pushed her thoughts to her lifelong companion. ‘But this is the first time in years I’ve been off on my own with no children, no husband. I don’t know where anything is, don’t know anyone here except Pam. And what about this guy I’m supposed to get the goods on? What’s his name? Baker?’

*
You will be successful, as you have always been
.*

Delaine basked in the warmth and acceptance Sapa sent along the bond. She drifted into a light doze and the lioness retreated to a small corner of her mind.

They were both snapped out of sleep by the sound of Timmons’ voice ringing through the limo’s intercom.

*
Ah, we have arrived. Our new home is fit for the princess you are
.*

Delaine blushed. Sapa had such a way with words.

The limo pulled into a paved half circle driveway on a wide, quiet street. The outside lights were on and Delaine’s mouth dropped open as she gazed at her new home through the window of the car. They’d arrived, all right. She’d lived in a nice house in Denver, but nothing like this. This was a large executive mini-mansion. Absolutely breathtaking, it was two stories of beautifully laid brick, with two sets of stairs that led up either side of a wide columned porch. The nearest house seemed half a block down the well-lit, tree-lined street.

‘Wow, Sapa, this is amazing. I can’t wait until morning to get a really good look.’

*
If you wish, I will lend you my sight so you can see the outside of the house now
.*

‘Nah, that’s okay. I can wait until morning. All I want right now is a bite to eat and a comfy bed.’

A Kiss of Darkness (Gothos Series) by Wolfcastlin, Selena
The Phantom Killer: Unlocking the Mystery of the Texarkana Serial Murders: The Story of a Town in Terror by James Presley
Run River by Joan Didion
And the Greatest of These Is Love: A Contemporary Christian Romance Novel by Staci Stallings
Ryder on the Storm: Emerald Seer I by Violet Patterson
Infiltrado by Connie Willis
Building Heat by K. Sterling
Tessa and the Warden by Veatch, Elizabeth A., Smith, Crystal G.
Violet Ink by Rebecca Westcott
What Follows After: A Novel by Dan Walsh
Our partner