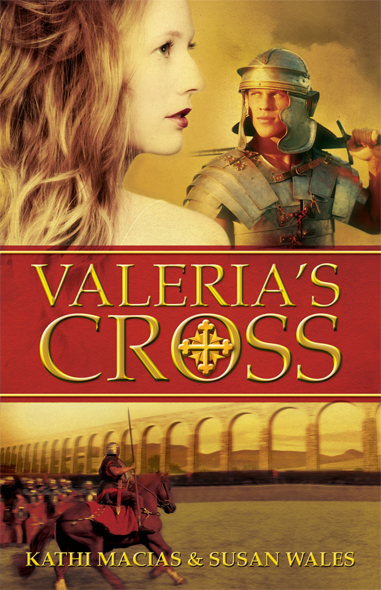 This powerful and emotionally evocative story transported me to a place where people’s passion and commitment to Jesus Christ was something they were willing to die for. I was deeply entrenched in the historical setting and challenged by the message in this novel.
Valeria’s Cross
will stick with me because of its powerful message of hope and commitment.

—Michelle Sutton, bestselling author of over a dozen novels, including
It’s Not About Me
(2008) and
Danger at the Door
(2009)

No part of this publication may be reproduced in any form, stored in any retrieval system, posted on any website, or transmitted in any form or by any means—digital, electronic, scanning, photocopy, recording, or otherwise—without written permission from the publisher, except for brief quotations in printed reviews and articles.

Many of the persons and events portrayed in this work of fiction are the creations of the author, and any resemblance to persons living or dead is purely coincidental, except for well-known historical figures and events. The authors have taken the liberty to change the order of some of the battles and events to enhance the story.

All scripture verses are taken from the King James or Authorized Version of the Bible.

The letter of Theban Legion is adapted from
The Golden Legend, or Lives of the Saints
(1483) translated by William Caxton.

Though
Valeria’s Cross
is a book of courage and adventure,
it is ultimately a love story. And so I dedicate this book
to the love of my life, my husband, Al,
and to my First Love, my precious Lord Jesus.

Thank you to Voice of the Martyrs for their updated version
of
Foxe’s Book of Martyrs
, which first introduced me
to the Theban Legion and birthed the idea for this book.

To my friends, Betty Motes and J. M., for the trip to
Diocletian’s castle in Split, Croatia, and many of the other
magical places on the Mediterranean Sea.
Old Broads at Sea
was my inspiration to write this story about the emperor’s
daughter, Valeria, and his wife, Prisca.

This book is dedicated to my mother, Mimi;
my daughter, Megan;
and my granddaughter, Hailey Blu,
for inspiring me to tell stories.

S
hame on you!
Valeria chastised herself as she serpentined through the secret passageway that led to her mother’s boudoir. Had the agonizing thought of leaving the palace during the exciting winter social season reduced her, the emperor’s daughter, to a common spy? Absolutely! Overhearing snippets of her parents’ conversation in the hallway, she knew she had no choice; eavesdropping was her only weapon. Valeria was determined to discover why her father was so insistent that she accompany her mother to Egypt.

Near the end of the tunnel, Valeria broke through a maze of cobwebs to reach the secret entrance to her mother’s room. She pushed the door, rusted shut by years of neglect, but it would not budge. As a young girl, she had frequently played in the tunnel, but a couple of years ago, she had put away her childish ways. Frustrated, she kicked the door repeatedly until at last it opened. A puff of dust blew into the room and settled over the Turkish carpet like a storm cloud, but there was no time to clean. The echo of her mother’s singsong voice drifted down the hallway, warning of her imminent approach. Valeria scurried to a hiding place behind the damask draperies—just
in time! The door swung open, and her parents, Emperor Diocletian and his beautiful wife, Empress Prisca, entered the room.

Valeria’s heart raced. She knew she should not be eavesdropping, but it was too late to turn and run. Besides, she needed to discover her father’s reasoning for the trip, and then perhaps she could persuade him to allow her to remain at home and attend the winter ball.

After all, her mother’s dressmaker in Milan had created a stunning velvet gown for the event, specifically designed to match the color of Valeria’s eyes, as well as the aquamarines in the bejeweled crown her father had presented to her on her fourteenth birthday. What more perfect occasion to show off her latest finery than the winter ball at the palace?

“You simply must not tell her,” she heard her mother protest.

“But if I do not, the child will surely drive me mad,” her father countered.

“You are a mighty warrior, my dear. Surely you can withstand the harpings of a fourteen-year-old girl.”

The emperor sighed. “Truthfully, I would rather fight a battle with the most ferocious barbarian in the empire than to deny a request from our strong-willed daughter.”

Behind the curtain, Valeria suppressed a giggle. Her incessant harassment of her father was obviously working. It should be only a matter of time until she wore down his resistance and he granted her permission to stay in the palace with the servants while he and her mother were away.

Prisca laughed. “What right do you have to complain? You know she inherited her strong will from you. It has certainly served you well.”

“Alas, it benefits me as a man, and more so as the Roman Emperor, but Valeria is a young woman.”

“As the daughter of the mighty Roman Emperor, Valeria will marry a powerful man. She will need her strong will.”

Diocletian’s voice reflected his good humor. “Is that spoken from the voice of experience?” Before Prisca could respond, the emperor teased, “I love the way your eyes spark with fire when you are angry, my love.”

Valeria muffled a giggle as she pushed the draperies aside to peek at her mother’s reaction. She felt her face grow hot as she watched in horror; her father pulled her mother close and placed his lips on hers. She squeezed her eyes shut and scolded herself for spying on her parents during such an intimate moment. How she wished she could disappear!

A few moments later, her father’s sandaled footsteps sounding across the marble floor as he walked away, Valeria was showered with relief. Then she heard his voice boom throughout the bedchamber. “Why not just tell her the truth?”

“Because I want our daughter’s childhood to be innocent and carefree.”

Diocletian chuckled. “In the meantime I will have to live in fear of her aggravating me.”

“So be it. I do not want our daughter frightened at such a tender age.”

Valeria was even more perplexed now. She had to know what could be so dreadful that her parents wanted to protect her from it. Curiosity overcame her, and she stepped out from behind the curtains.

“Valeria!” the couple cried in unison. The shock on their faces was evident, as her mother jumped up from the divan and walked over to her daughter.

“What were you doing hiding behind there?” Prisca demanded.

Valeria ignored the question, and asked, “What is this ominous threat that you are afraid to tell me about?”

Her parents looked at one another for a moment and then burst into laughter.

“Come here,” her father coaxed, reaching out for her.

Valeria remembered protocol and fell prostrate before her father. She wondered if he were still smiling or if his initial humor had turned to anger, but from her vantage point all she could see was the jeweled hem of his robe and his pointy red slippers encrusted with diamonds. One thing the emperor would not tolerate from any of his subjects, including his daughter, was the refusal to bow down before him, so she had to remain perfectly still until he dismissed her.

There were no servants in the privacy of her mother’s room, and Valeria felt her father’s hand reach for her to help her to her feet.

Accepting his invitation, Valeria took his hand. Diocletian pulled her close and peered over the top of her head as he announced to his wife, “There is no greater fear than fear of the unknown. I must tell her.” He paused, as if waiting for his wife’s approval.

“Oh, do tell, Father,” Valeria begged, filling the silence as she pulled away from him and shot her mother a pleading look.

“Very well,” Prisca agreed, as she resumed her seat on the divan and patted the spot beside her.

Once the women were seated, Diocletian explained. “As you know, I am leaving for Gaul in a few weeks to join my troops in order to quell an uprising by the Burgundy rebels.”

“I do know, yes. And I will miss you terribly, Father.”

The emperor smiled. “I will miss you, too, my darling. But if you must know, I am sending you and your mother to Egypt, not for pleasure but for your protection.”

“But I thought our palace in Nicomedia was the safest place in the Empire,” Valeria argued. “You have told me so on numerous occasions.”

“At one time this was true, but our reconnaissance spies have heard rumors of a plot by the rebels to invade Turkey. With all the uprisings throughout the empire, and the majority of the army, as well as me, away in Gaul, our castle in Nicomedia could be in imminent danger. Should our home be invaded, your lives and the servants’ could be in jeopardy. I cannot risk such a threat.”

Valeria hung her head. “Please forgive me, Father. I had no idea you were saddled with such an enormous burden.”

Her father lifted her chin with his thumb and index finger. “You are not to worry your pretty head about me, nor anything else for that matter. You and your mother will be safe and happy at the palace in Egypt. Some of the finest armies in the empire are stationed there.”

“Thank you for your concern for our well-being, my lord,” Valeria answered, humbled by her father’s care, though still doubtful that Egypt would be nearly as pleasant as he claimed.

Simply Wicked by Kate Pearce
The Long Way Home by Lauraine Snelling
The Dragons' Chosen by Gwen Dandridge
Mouse by D. M. Mitchell
Truly Married by Phyllis Halldorson
A Promise in Midwinter by Stark, Alyssa
This Is How I Find Her by Sara Polsky
Literary Rogues by Andrew Shaffer
The Google Guys by Richard L. Brandt
A Corisi Christmas (Legacy Collection #7) by Ruth Cardello
Our partner