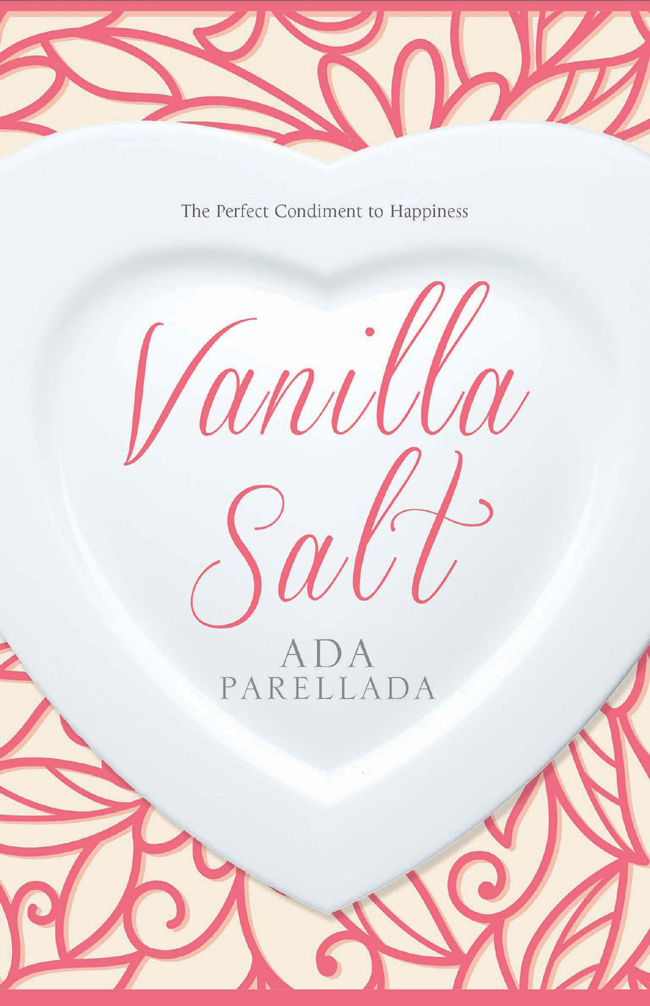 First published in Catalan by Editorial Planeta, S.A. in 2012

Translated from the Catalan by Julie Wark

This translation, based on a revised text, was published by Alma Books Limited in 2014

Ada Parellada asserts her moral right to be identified as the author of this work in accordance with the Copyright, Designs and Patents Act 1988

All rights reserved. No part of this publication may be reproduced, stored in or introduced into a retrieval system, or transmitted, in any form or by any means (electronic, mechanical, photocopying, recording or otherwise), without the prior written permission of the publisher.

This book is sold subject to the condition that it shall not be resold, lent, hired out or otherwise circulated without the express prior consent of the publisher.

Except for the incarnation and death of the Creator, the greatest event since the creation of the world is the discovery of the Indies
.

Àlex could really do with some help in the kitchen. It’s now a week since the last bloody moron walked out on him. “You know what I say? Go and stick turnips up every one of your orifices, including the smallest one,” he bawled at the kitchen hand who, also enraged, flung down his apron on Table 3.

Since Moha left six months ago, things have gone from bad to worse. Everyone’s broke, that’s true. Àlex, owner of the Antic Món restaurant, hardly speaks or listens to anyone, but even so, he can’t avoid the news that a lot of businesses are closing down. Crisis.

Well, that’s not quite the case for everyone. Can Bret is just opposite Antic Món and they’ve got plenty of work. More than that, they’re flat out. On weekdays it’s full of workers from the industrial estates around the town of Bigues i Riells. Well, they’re not exactly workers in blue overalls but the so-called white-collar lot, who don’t have a cent of their own in their pockets. If they’re lunching with a supplier they’ll go for a Priorat red, one of the pricey ones. If they’re eating with clients and have to pay themselves, they order the house wine,
saying, “It’s from a great boutique winery I’ve just discovered.” Slick bastards!

Weekends are pure madness at Can Bret. Its customers even invade Antic Món’s car park! Àlex can’t stand it. When this happens, he usually rushes out of the kitchen like a raving lunatic, no matter what he’s doing at the time. If he’s filleting a sea bass, he flies out with the fish in his hand, brandishing the weapon at his neighbour’s customers. Sometimes, however, he gets tired of yelling at them and lets them park wherever they bloody like. Anyway, it’s ages since he’s needed all the spaces in his car park.

Ever since Can Bret joined the
calçotada
craze – churning out charcoal-caked mountains of barbecued spring onions smothered in romesco sauce, which diners are then supposed to eat with their fingers – people have been coming in hordes. Those bastards are doing fine. Each of the owner’s daughters drives a brand-new Mini, and one of them is pink. Poor girls, they look so damn ridiculous, Àlex thinks as he peels apples and stares out the kitchen window. This is one of his main distractions when he’s cooking: slyly checking out the competition’s customers. He finds them all horrendous, just like he thinks that everything they have and do at Can Bret is utterly despicable.

Now, Àlex is different. He really knows the trade. He’s pure. He’s honest. He never studied in any catering school but, for anyone who lives it intensely enough, life is as good as a PhD from Harvard. It’s extremely demanding, but if you see it through to the end you come out on top. The rest fall by the wayside. Àlex graduated with honours from the University of Life, but he’s a little rusty in Diplomacy. He’d be lucky to get five out of ten for that.

The apples are ready. He sautés them in a little butter with a sprinkling of sugar until they glow with the golden tones of the setting sun. He then puts them aside in a bowl and, as usual when he makes this dish,
can’t resist having a taste. They’re divine, and their intense fragrance pervades the kitchen. The feeling is difficult to describe, but it takes him back to the family kitchen, when he was a little kid and the house rang with laughter.

In a medium-sized casserole he browns the chicken thighs in olive oil and then adds the chopped onion and a clove of garlic. He turns the heat down and lets it all cook slowly. Now it’s time to add a generous dash of brandy and, as part of the recipe, have a tipple himself, because his communion with the chicken must be complete, body and soul. Perked up by the brandy, the chicken starts singing, at first with great gusto, then finishing with the sweet murmur of a little hymn to spring. After tipping in the brandy and draining his own glass Àlex sings too, his rendition of Lluís Llach: “Pull, pull together and we’ll all be free…”

This is a strange ritual he often indulges in. Each dish has its own song and Lluís Llach is great for chicken with apples. Now he covers the chicken thighs with broth and keeps them simmering. “If we pull together, the tyrant will fall, and bad times will end in no time at all.”

The phone rings. It would bloody have to be right now, when he’s happy cooking and singing ‘L’estaca’. Who the hell’s trying to bother him this time?

Half an hour, half a bloody hour this woman’s had him on the phone. It’s the third time she’s called this week. Yes, yes, don’t worry, on Sunday he’ll cook macaroni for her grandson and, yes, he knows the boy’s only six and is allergic to every kind of food on the planet and, yes, of course he’ll put flowers on the table, and the cava will be properly chilled, just as a good sparkling wine should be… and two or three other requirements that have completely slipped his mind because he hasn’t made a note of any of them. If the customer knew that by the time he put down the phone he’d forgotten everything she said, she’d have a fit.

All this crap really winds him up. His customers, in Antic Món, are supposed to come here to eat, not to sniff flowers. Flowers, smells… What he can smell now isn’t flowers, that’s for sure… It’s chicken! Fuckfuckfuck! The chicken’s burning!

He runs into the kitchen but it’s too late. The chicken’s burnt to a cinder. The broth’s all gone and the casserole’s pitch black. Bloody woman!

He sits at the kitchen table, staring at the wreck and the dark smoke rising from it. He pours himself a glass of brandy, right to the brim, and sips at it as he eats the cooked apples one by one.

Tomorrow he’ll phone Òscar and will take on that friend of his as a kitchen hand. He’s got no choice. He needs help. He can’t do this all by himself. Well, if she’s no good he’ll boot her out on day one. He’s had a gutful of trying to help out losers.

When Moha was here, everything worked better. Or at least it was easier. They even had a good laugh sometimes. His Moroccan kitchen hand turned up dirt-poor and holding out not just one hand but four. That was their joke, tirelessly repeated. It was always the same, because that kid really could do four things at once, and in a split second too: wash a saucepan, keep an eye on the fillet, stir the custard and turn out a pear
tarte Tatin
. He’d developed these skills because he frequently had to manage the stove, the dishwasher and a practically full restaurant all by himself, while Àlex, slumped over the kitchen table, slept off the effects of half a bottle of gin.

Moha didn’t drink, of course. He was a fervent Muslim. He observed Ramadan and prayed a lot in that strange position, half stretched out on the floor, facing Mecca with his bum pointing at Àlex’s
pernils de gla
, the very best hams from the most pampered acorn-fed pedigree pigs.

Àlex couldn’t handle that. When he saw him in that snail-like posture, he just had to kick his arse. It was a kind of therapy. After the well-aimed kick, his spiced loin of venison always turned out absolutely fantastic.

Moha laughed too, because every kick would be repaid in eight days, he said, and he worked on his revenge all week. His imagination was boundless. One day he got a friend of his to phone, pretending to be the secretary from the Moroccan embassy. She informed Àlex that a government minister would be coming to have lunch at the restaurant. All the staff would have to wear traditional Moroccan dress in order to receive him: a white djellaba, pointed-toe slippers and a red skullcap. Moha’s friend went so far as to say that he needn’t worry about the attire, because everything was being sent from the embassy and he’d have it all very soon. The telephone conversation ended with: “We hope you will comply with the wishes of His Excellency the Minister.” The next day the finery arrived, and Àlex got all decked out in ceremonial dress to await the big shot. Moha’s friend rang at the restaurant door and, when Àlex went to open it, her camera didn’t stop flashing. The photos are still on all the social-media sites. Àlex nearly pissed himself laughing. He thought it was hilarious, but Moha had to pay. And he certainly paid! He had to cook dishes with sausages and other pork-based delicacies for two weeks.

Moha was worth his weight in gold. They’d made a great team.

“Boss, my dad’s sick. I’ve got to go to Fez to look after him and take care of the goats.”

“Tell me another one, you bloody liar! You’ve never seen a goat in your life! And your dad lives right here. I see him every morning in the bar, breaking the Ramadan fast with a glass of cheap brandy,” Àlex said fondly.

“OK, you caught me out again. You’re right, boss. My dad doesn’t live in Fez and he hasn’t got any goats and he’s healthy enough to chase all the skirts in Bigues i Riells. But, yeah, I’m going to Morocco. I’m getting married and my fiancée wants to go and live there. I’m going to work in a luxury hotel they’ve just opened in Fez. I got through the
selection process,” Moha said, avoiding his boss’s eyes. Basically, he felt bad about leaving Àlex in the lurch.