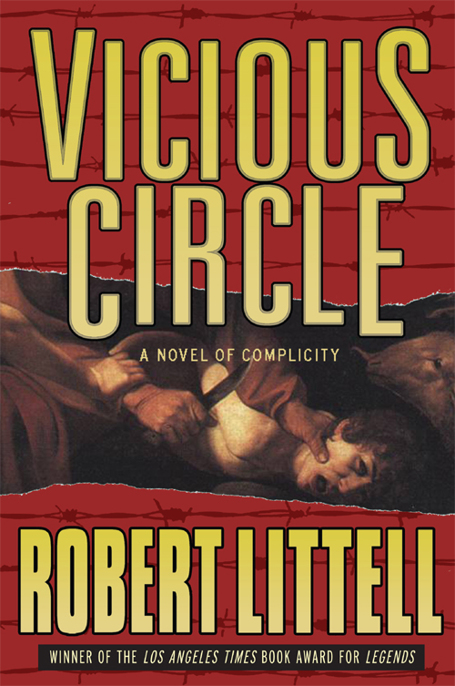 Walking Back the Cat

An Agent in Place

The Once and Future Spy

The Defection of A.J. Lewinter

This is a work of fiction. Any similarity to persons living or dead is purely
coincidental … the same is true for events.

This edition first published in 2006 by
Overlook Duckworth

All rights reserved. No part of this publication may be reproduced or transmitted in any form or by any means, electronic or mechanical, including photocopy, recording, or any information storage and retrieval system now known or to be invented, without permission in writing from the publisher, except by a reviewer who wishes to quote brief passages in connection with a review written for inclusion in a magazine, newspaper, or broadcast.

SOMETIME IN THE RECENT PAST

SOMETIME IN THE NEAR FUTURE

For Emir and Alma

Behold, thou shalt bear a son, and shalt call his name Ishmael … And he will be a wild man; his hand will be against every
man, and every man’s hand against him … And Hagar bare Abram a son.

And God said, Sarah thy wife shall bear thee a son and thou shalt call his name Isaac. And as for Ishmael, I have blessed
him and will multiply him exceedingly … But my covenant will I establish with Isaac.

SOMETIME IN THE RECENT PAST

T
HE SETTING SUN SCORED THE NAVIGATOR’S LINE BETWEEN SKY
and sea, drawing blood, flinging long shadows inland on the flat Levantine coast. Flecks of last light chipped off the gold
leaf of the Dome of the Rock on the Temple Mount. Not far away, a panel truck with the hand painted logo “Kosher Pizza” and
“We Deliver” written in Hebrew on both sides crawled along a street on the French Hill, a small Jewish neighborhood built
on the north-eastern slope of Jerusalem after the Six Day War. The driver, a young woman with short cropped hair and wrap-around
sunglasses that masked her eyes but drew attention to the smallpox scars that disfigured an otherwise handsome face, pulled
up next to a bus stop. Rolling down the window, checking an address on her clipboard, she asked a teenage girl waiting for
a number four bus for directions to the apartment building on Etzel Street where students from Hebrew University on Mount
Scopus rented rooms. “You’re on Etzel Street,” the girl told her in Hebrew. “The numbers are hard to make out after sunset.
The building you want is the second one down from the top of the hill on your right.” The girl, who was wearing a short skirt
and a body hugging turtleneck sweater, snickered. “What makes kosher pizza kosher?” she demanded. With a shrill laugh, she
supplied the answer to her own question. “I suppose it means some Orthodox Rabbi who won’t touch a female of the species when
she’s menstruating blessed the bacon.”

The young woman driving the panel truck gnawed on her lower lip. “I only deliver,” she said. “I don’t justify.”

“You speak Hebrew with an accent,” remarked the girl waiting for the bus. “Where are you from?”

“Where in Yemen?” the girl asked but the young woman had already thrown the panel truck into gear and started up the hill.
Two apartment buildings from the top she swung into the driveway that led to the front door of tarnished brass and rain-stained
glass and cut the motor. She rapped twice against the partition behind her shoulder and said softly, in Arabic, “God is great,
Yussuf. We are arrived.”

A young man dressed in a zippered yellow jumpsuit with “Kosher Pizza” embroidered over the breast pocket emerged from the
rear of the panel truck carrying a boxed pizza and a delivery ticket. At the front door he pushed the buzzer to an apartment
on the second floor known to be rented to half a dozen students from Hebrew University. “Pizza delivery,” Yussuf said in Hebrew
when a female voice responded. The student assumed one of her roommates had ordered pizza and dispatched an electric current
to the lock on the front door, which instantly clicked open. Yussuf held the door for the nearly blind doctor who had been
in the back of the panel truck with him. The doctor, wearing windowpane-thick eyeglasses with wire frames and tapping a long
thin bamboo cane on the pavement before him, followed Yussuf through the shabby lobby and up the stairs, careful to stay half
a floor behind him.

At the fourth floor Yussuf pushed open the fire door; the doctor, a heavy-set man, on the short side with short-cropped hair,
remained out of sight on the landing. At the far end of the long and narrow corridor a burly Israeli wearing aviator’s sunglasses
and an open necked sport shirt outside his slacks tipped his folding metal chair off the wall onto its four legs. Yussuf stopped
under one of the corridor lights to consult the delivery ticket. “Which door is four-sixteen?” he called in Hebrew to the
Israeli.

“This is four-sixteen,” the Israeli replied, “but nobody told me about a pizza delivery.”

Yussuf started toward the Israeli, who rose to his feet and reached behind his back to grip the butt of the revolver wedged
into his belt. Holding the pizza in his left hand, Yussuf said amiably, “Somebody
owes me thirty-eight shekels,” and he offered the delivery ticket to the Israeli, who towered over him by a good head.

The Israeli, with his giant right fist wrapped around the butt of the revolver, accepted the delivery ticket with his left
hand. He made the mistake of taking his eyes off the delivery man for a moment. He noticed “Apt 416” written in ink immediately
under the address on Etzel Street. He saw the name of the young American woman who rented the apartment, Goodman, on the top
of the delivery ticket. And then his eyes went sightless as the thin dagger with the tapered blade that Arab farmers used
to kill fowl plunged between the second and third rib into his heart, severing the pulmonary valve, drawing blood, cutting
off life.

Catching the bodyguard under an armpit, Yussuf lowered him back onto the folding chair, then patted the pockets of his slacks
in search of the key to the apartment. He found it as the doctor, his bamboo cane scraping the surface of the linoleum along
the wall, came up behind him. Holding the bodyguard’s revolver in his left hand, Yussuf slipped the key into the lock and
noiselessly opened the door to four-sixteen. He quickly dragged the corpse through the door and propped it up in a sitting
position against the Syrian camel saddle in the entranceway. The doctor rested one hand on Yussuf’s shoulder and followed
him down the hallway to the bedroom. Grunts of exertion came from behind the door, as if it led to a gymnasium. Yussuf turned
the knob and opened the door and stepped into the room, which was lighted by Palestinian rush candles and perfumed with incense.
Except for the large mattress on the floor, the room was unfurnished. Two naked figures appeared to be wrestling on the mattress.
The former general, now Minister without portfolio in the coalition government, was flat on his back, his skin glistening
with perspiration as the American woman, his mistress for the past seven months, worked her lean body up and back, then down
and forward, above him. The Minister must have caught a glimpse of shadows flickering on the wall because he tried to push
the woman off just as Yussuf, reaching over her shoulder, slit her throat. She collapsed onto her lover’s body. The sticky
rivulet of blood spurting from her neck soaked into the sweaty tangle of gray hair on his chest.
Yussuf, leaning over the mattress, punched the dagger through the man’s right palm, impaling his hand to the mattress, then
aimed the revolver at his right eye. The Minister, whose courage in combat was legendary in Israel, managed a hoarse whisper.
“Fuck you, whoever you are,” he muttered, breathing hard from the pain. The doctor, kneeling on the carpet, began to probe
the Minister’s skull behind the ear, searching with the tips of delicate fingers for the distinctive knob of bone. When he
found it he produced a pearl-handled Beretta from the inside breast pocket of the double-breasted suit jacket he wore over
his white robe. Knowing the Minister understood Arabic, he recited a passage from the Holy Qur’an. “
Whoso judges not according to what God has sent down—they are the unbelievers. And therein We proscribed for them: A life
for a life, an eye for an eye, a nose for a nose, an ear for an ear, a tooth for a tooth, and for wounds retaliation
.”

He worked the slide on the pistol, chambering the first round, then pressed the tip of the barrel to the spot immediately
under the knob of bone and pulled the trigger. The Beretta, chosen by the doctor because of its small caliber, barely made
a sound as it dispatched a bullet into the Minister’s skull. There was a reflexive muscular spasm from the brain-dead man,
then the utter stillness that suggested the absence of life.

Rising to his feet, retrieving his bamboo cane, the doctor made his way to the window and tugged aside the cheap curtain thumb
tacked to the sash. He could make out the blur of the full moon rising over the Judean hills. “Shadows are all I can see,”
he whispered as Yussuf joined him at the window.

Yussuf said, “At this hour shadows are all anyone can see.”

“Look into the shadows with your youthful eyes and tell me what you see.”

“In the near distance I see the shadows of the Judean desert.”

“Beyond the Judean desert I see the surface of the Dead Sea silvery with the pale light of the full moon.”

“Beyond the Dead Sea I see the deep shadows of the hills of Moab in Jordan.”

The doctor nodded. “In the Jewish bible, it is said the descendants of the Prophet Ibrahim’s nephew, who was called Lot, inhabited
the kingdom of Moab.”

Yussuf seemed taken aback. “You have read the Jewish bible?”

“Clearly, the Prophet himself, who was the Messenger of God, was familiar with the Jewish bible through his contacts with
the Jewish tribes in Yathrib, the oasis that became known as Medinat an-Nabi, or more simply, Medina.” The doctor turned away
from the window. “Clearly,” he murmured, following another thought as he moved like a phantom through the rushlight toward
the door, “God is most great who permits His blind servant to smite the enemies of Islam.”

The predawn raid on the apartment in the city the Arabs called Nablus and the Jews called Schrem was to be Elihu’s swansong—the
elite Mossad commando team that he’d led for more years than he cared to remember had already held a raucous dinner in a seaside
restaurant in Jaffa to celebrate his promotion to
katsa
. From now on Elihu, a veteran of twenty-thee raids—including the famous one led by Ariel Barak into the heart of Beirut—would
run agents from a secret Mossad bureau in Jaffa as opposed to personally leading them into combat.