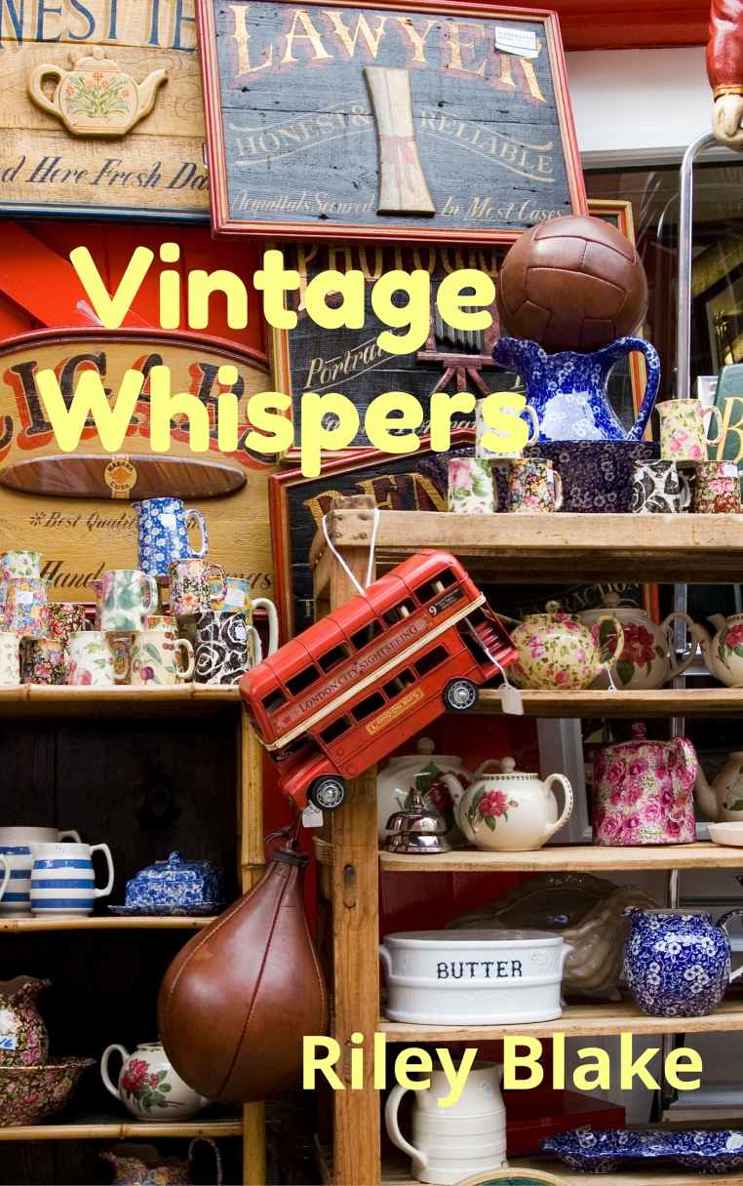 ALL RIGHTS RESERVED
: This cozy mystery may not be legally reproduced in any form or by any means without written permission. For more information write
[email protected]

All characters and events in this book are created for fiction and a product of the author’s imagination. Any resemblance to actual persons living or dead is strictly coincidental.

“Let’s do this, girls.” Mary Louise pressed her fingers together and with a calculated roll of her right wrist, she waved farewell like a princess might. Her son and daughter-in-law might as well enjoy their fairytale. “Thank you again for such a thoughtful surprise!” She glanced at her best friends now standing at her left. “Wave. Make them think we’re thrilled to be here.”

“And even more excited to see them go,” Pearl said, fanning her arms as if she were herding cattle.

“Don’t let us keep you, sweetheart!” Pearl shouted. “Go on and enjoy life! Be young, wild, and free!”

“Such a classy resort!” Opal cupped her hands around her mouth. “And good luck getting your inheritance, you little brats!”

Pearl plucked a loose thread from her pink cashmere sweater. “We’re supposed to play it smart.”

“Not to hurt your feelings, but if we were playing this smart, we wouldn’t have told you about it. By your own admission, your brain is as blonde as your roots.”

“Why you and I both know that’s not poss—”

“Not now, Pearl,” Mary Louise muttered, pointing at the dark blue jalopy now backing down the long drive. “And…looks like the brat-comment was just enough to make them slam on the brakes.”

“Thank you for that.” Pearl dabbed the corners of her eyes. “I’ve never been one for the long goodbyes.”

“Believe me, this is only temporary,” Mary Louise said, giving the kids props for acting like it was nearly impossible to leave them behind. “Those scoundrels can’t go one day without asking us to babysit.”

Catherine opened the driver’s side door. “Did you need something Aunt Opal?” Poor thing probably didn’t have enough gumption to roll down a pump-style window.

“Oh it’s you again,” Opal muttered before clearing her throat. “Good luck, dear! Hope you find someone who will appreciate my new hats.” Opal adjusted the blue and white pillbox-style cradling her head. “Take care of the newer fashions. Won’t you?”

“Of course, Aunt Opal,” Catherine said, waggling her fingers in their direction.

Opal had recently purchased her Derby Day accessories and outfit with full intentions of dressing to the nines and cheering on her chosen filly. America’s favorite horse race was the perfect reason to sip mint juleps and overindulge in pecan pie. Of course a day at Churchill Downs—or in Opal’s living room—wouldn’t be complete without Dan Folgerberg’s
Run for the Roses
.

“Don’t worry, Aunt Opal!” Catherine flipped her golden blonde hair over her shoulder. “We’ll fetch a nice price for them!”

“Take it easy, girlfriend.” Mary Louise grabbed Opal’s arm before she sprinted down the front steps.

“Psht. I wouldn’t give them the satisfaction.” She could’ve fooled Mary Louise. “They can have the doggone things if they want them. After this, they may not see another dime from me.”

“Now, now,” Pearl said, sliding her arm around Opal’s shoulders. “They’re just kids. We have to overlook them.”

“But we can stop this nonsense before we lose everything we own including our independence.” Mary Louise sent out a last flag-style side-to-side gesture, one she instantly regretted. She didn’t want to detain the in-law and outlaw. She was quite eager to see them go. “Just remember that their so-called plan—or rather scam—alerted us in time to secure our assets and take advantage of this trial period.” She glanced back at the white plantation-style house. “We could do a lot worse.”

“Is that a question?” Opal scoffed. “You do realize Mark and Catherine expect us to slip right into the humdrum of retirement living. They’re transparent. Don’t ‘cha think?”

Pearl released an exaggerated sigh. “Oh but retirement sounds so wonderful. Doesn’t it?”

“No!” Opal and Mary Louise weighed in at the same time, turning to Pearl with stern glares.

Pearl didn’t pay them any mind. Instead, she looked away, clearly awed by the manicured grounds, cherub fountains, and flower gardens. “It’s lovely here. We should give the kids some credit. They must’ve looked everywhere for a place like this.”

“Sure they did. Right over the hill is Downtown Bristol.” Opal pointed at the approximate location of Vintage Whispers, the antiques and collectibles store they’d started together over ten years ago. “They went to a busload of trouble. Didn’t they?”

“Bet they plan to keep the business. That’s why they wanted us nearby.” Pearl was like a sister, but her daughter Catherine was a sadistic little twit. She’d keep her mother within a stone’s throw so Pearl would often wonder what she might be missing.

Mary Louise frowned. Maybe Mark possessed similar goals. Of course he did. They were two of a kind. “Crows with dull feathers nest together.”

“Now you’re comparing us to old birds? Humph. I think not.” Pearl crossed her arms in a huff. “We’ll catch our second wind. Just you wait. And we’ll be the cutest old gals in skirtinis.”

“Don’t get too comfortable,” Mary Louise grumbled, thinking she’d enjoy a parachute more than an older woman’s bikini. “We aren’t staying unless this place is affordable and quiet. So far, I haven’t seen evidence of either.”

“She noticed the screeching crazy woman when we passed the activities room,” Opal explained.

Pearl straightened her shoulders, clearly in the know. “Miss Layla is a resident here. Try not to get too attached. She won’t be with us much longer. Those awful screams are part of a death ritual. In some cultures, when it’s someone’s time to go, a banshee alerts the one marked for termination. That way he or she can prepare to meet death with dignity.”

“That hollering was anything but dignified,” Opal informed her.

“Girls, she’s Irish. Her spirit messenger has been wailing for days. Oh and the yowling won’t stop until death claims her.” Pearl nodded rapidly, completely sold on Miss Layla’s nonsense. “It’s only a matter of time now, from what I understand.”

“That last part explains everything,” Opal pointed out, turning to Mary Louise. “Want me to cover this or do you have it?”

“Pearl, hon, I hate to tell you this but your new friend’s screams could peel the chills right off my spine.”

“
Miss Layla
isn’t screaming. I heard the banshee myself.”

“Sure you did, when you looked the other way.” Opal rolled her eyes. “Trust me, honey. I saw her throw those shoulders back and let it rip.”

“Death is coming for her.”

Opal scoffed. “The only thing coming for that woman is a straightjacket.”

“You have your opinion and I have mine.” Changing the subject, Pearl pointed at a small woman pruning roses. The snipping of scissors filled the air as she tossed weeds to the wayside. “Selma, the activities director, said to treat the grounds as if they’re our own.” About that time, the gardening resident pushed away from her chore. Shaking her head a few times, she marched to the center plot and plucked all the blooms. She threw them on the ground and stomped the petals to bits.

“Oh my,” Mary Louise said. “Someone has quite the temper.”

“Are you sure we weren’t dropped off at the nut farm?”

Pearl clicked her tongue. “Don’t be silly. I haven’t seen any nuts since we arrived.”

“Wish I could say the same,” Opal mumbled. She then pointed at a male resident swinging his ax high behind his back. “Guess the whole ‘make this place your own’ is a strong selling point. The fellow over there looks as if he has a serious beef with that oak.”

Mary Louise squinted. “Isn’t that Clarence Jackson? He and his wife Samantha used to shop with us.”

“Oh yes,” Pearl said. “We saw a lot of him back when Mrs. Jackson was still living. Her death was such a pity. They were a lovely couple.”

Mary Louise didn’t realize Clarence had moved to the retirement community. He used to own a small farm out near the lake. She studied Clarence momentarily before determining the tree’s potential fall zone. “Wonder if he’s noticed the obvious?”

The Quest of Julian Day by Dennis Wheatley
Studs Lonigan by James T. Farrell
Wraith's Awakening (Para-Ops) by DePaul, Virna
What World is Left by Monique Polak
Where the Heart Leads by Jeanell Bolton
Miss Julia Renews Her Vows by Ross, Ann B.
The Identity Man by Andrew Klavan
We Are the Children of the Stars by Otto O. Binder
Her Dragon's Soul (Dragon Guard Series Book 9) by Julia Mills
A Spring Deception (Seasons Book 2) by Jess Michaels
Our partner