Read Vulgar the Viking and the Rock Cake Raiders Online

Vulgar the Viking and the Rock Cake Raiders 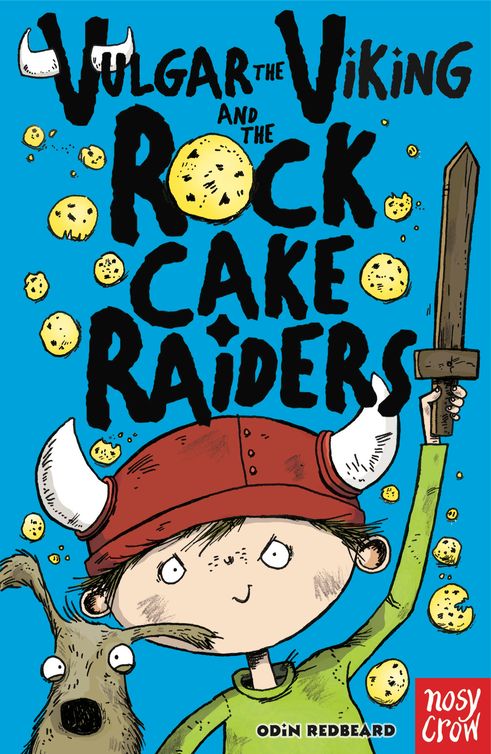 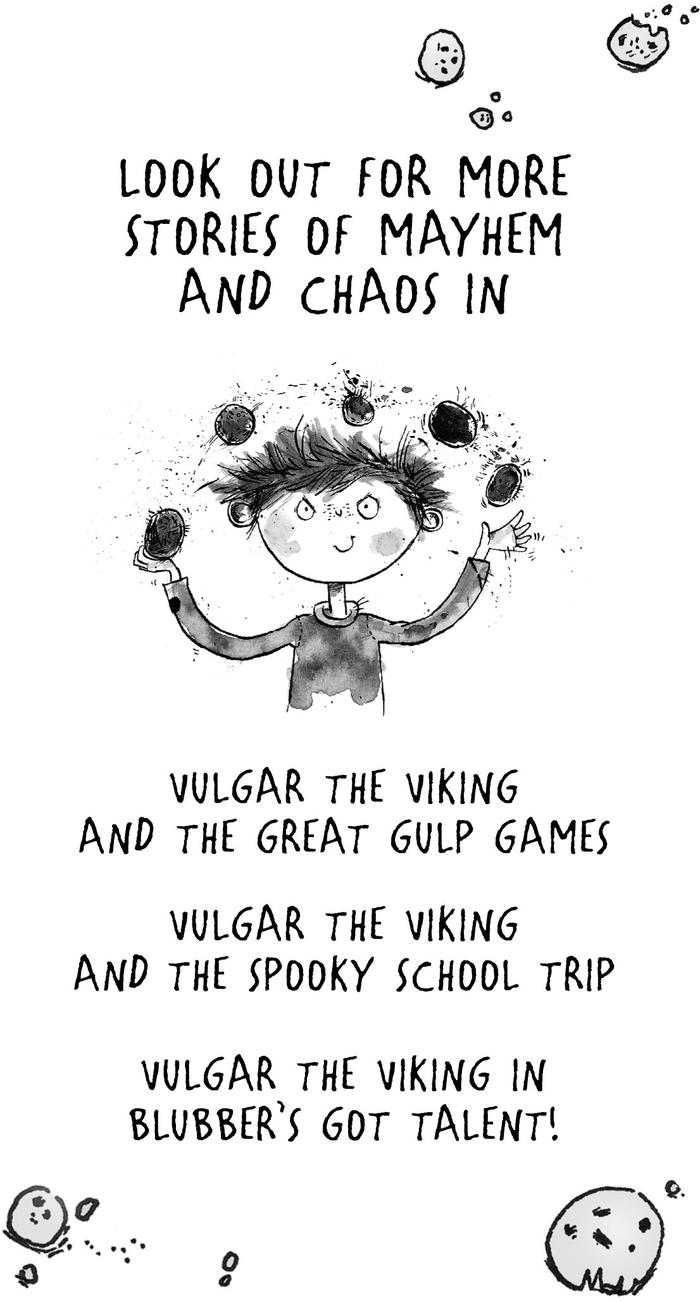 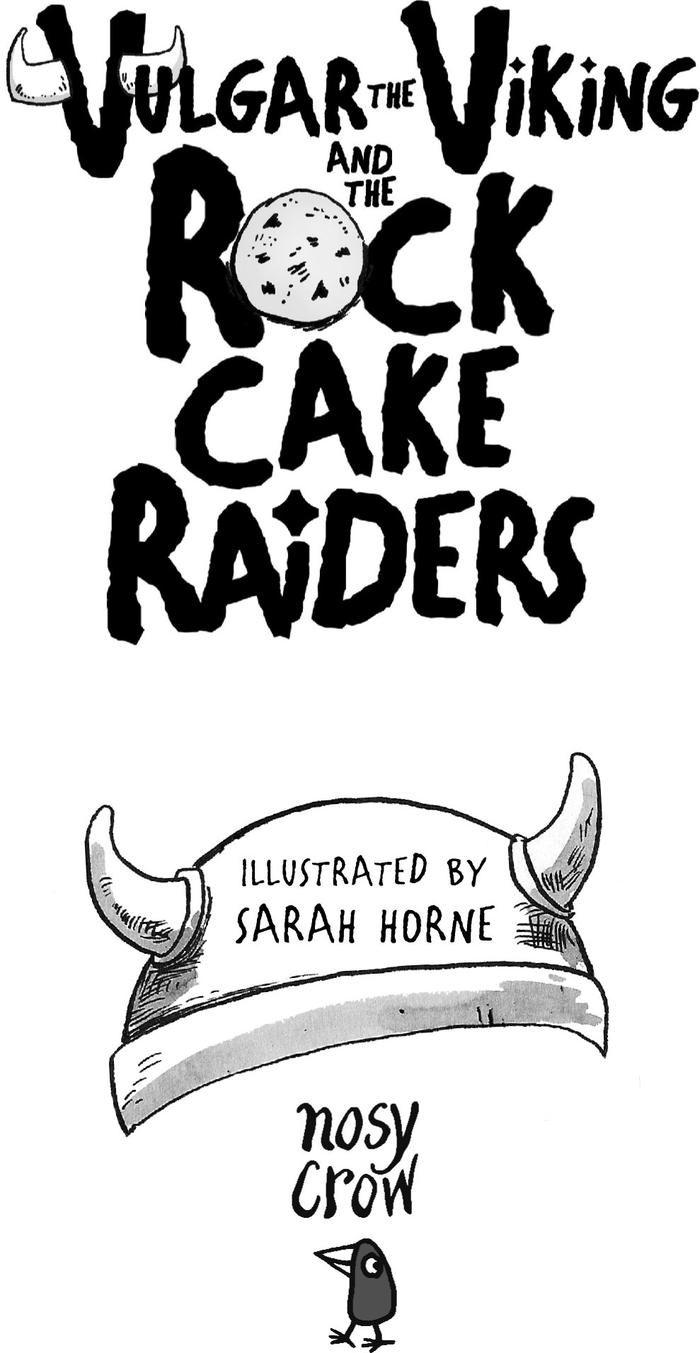 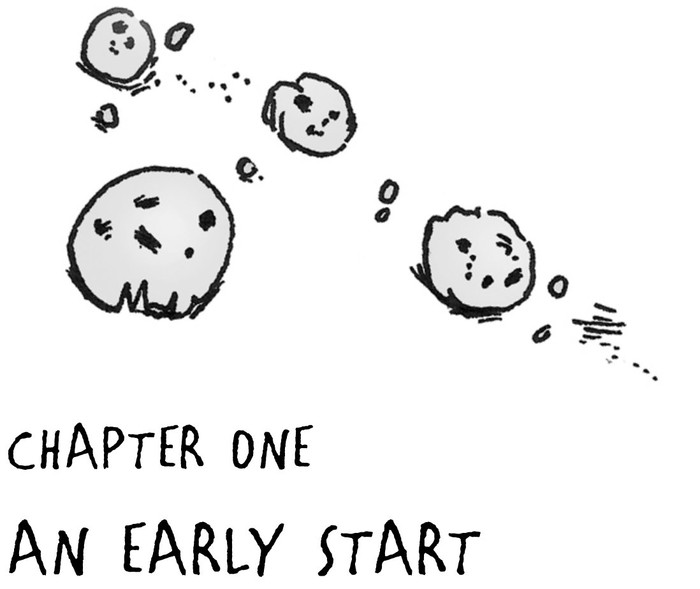 The cockerel’s cry tore through the early morning air.

In a messy bedroom, in a small hut, somewhere near the centre of the sleepy town of Blubber, a young boy named Vulgar threw back his covers and leapt out of bed.

His covers gave a loud, grumpy
woof
as
they landed in a heap on the floor.

“Sorry, Grunt,” said Vulgar, looking down at the shaggy dog who had been sleeping on his legs. “Forgot you were there!”

Grunt gave a low growl of annoyance and scratched his ear with his back leg.

Vulgar smoothed out his leather tunic and tightened the string belt of his
seal-skin
shorts.

He’d slept in his clothes last night, because today was a big day and he didn’t want to waste a moment of it getting dressed.

Vulgar kicked open his bedroom door and hurried along the narrow passageway that led to the kitchen.

As he bounded into the room, Vulgar spotted a huge, dark figure standing in the corner.

The figure was so tall and so wide it looked like a small mountain.

It blocked the kitchen window, leaving the whole room in almost total darkness. In its hand it clutched a large, sharp axe. 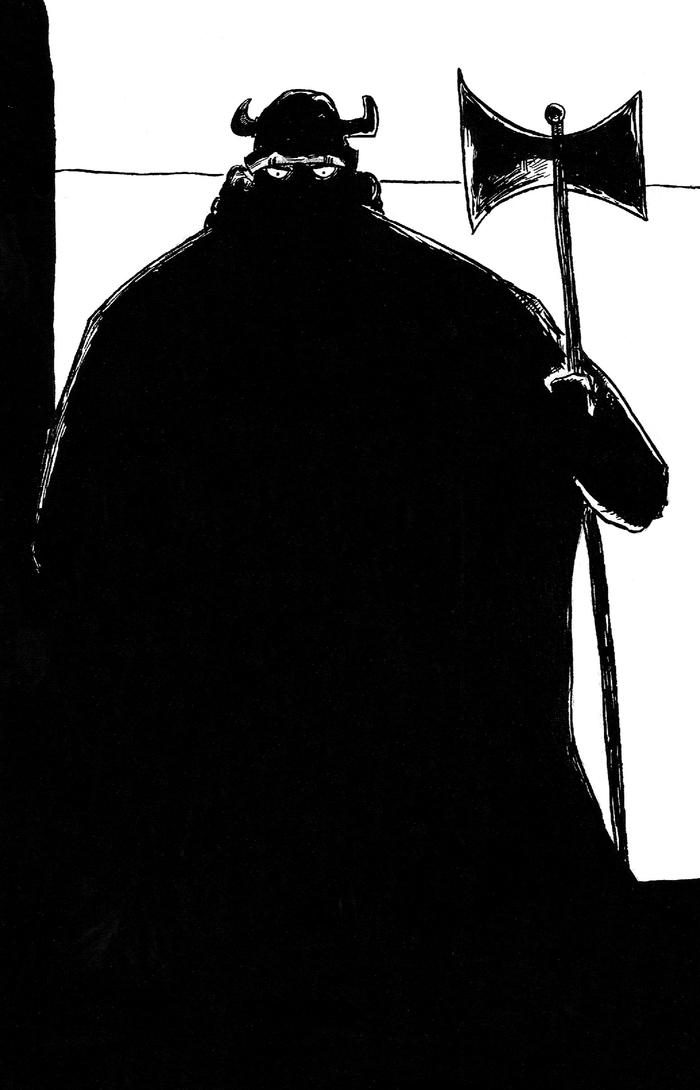 “By Odin’s beard!” boomed Vulgar’s mum, Helga, her voice making the flames of the fire quiver and shake. “What’s got you out of bed so early?”

“It’s History Day!” said Vulgar excitedly. Behind him, Grunt padded into the room. The dog gave a snort as he slouched down on to the floor beside the fire, before falling asleep again.

“History Day?” repeated Helga, splitting a log as tall as Vulgar with one blow of her axe.

“I’ve told you about it a hundred times,” said Vulgar. “It’s a whole day of learning about Vikings.”

Vulgar’s mum frowned. “We
are
Vikings,” she said.

“No,
proper
Vikings!” cried Vulgar. “Like in the olden days. You know? All looting and plundering and adventure on
the high seas.” He shook his head sadly. “Not like the Vikings who live in Blubber, all snoozing and gardening and … and …
knitting.
”

“Yes, there is,” groaned Vulgar. “It’s
boring
,
just like everything else around here. Except History Day.”

“I’ve never seen you this excited about learning stuff before,” said Helga. She eyed her son suspiciously. “Are you up to something?”

“Because you’re
usually
up to something.”

“I’m not up to anything,” Vulgar said, sighing. “It’s just …
it’s
History
Day!
About
real
Vikings.” He puffed up his chest and clenched his fists. “Just like I’m going to be.”

“Well, Mr Real Viking, before you go anywhere, you can get in the bath and wash that hair of yours. It’s filthy.”

“But
Mum
,” groaned Vulgar. “It’s
supposed
to be filthy. Whoever heard of a Viking with clean hair?”

“What about your father?” Helga asked him. “Your father always has clean hair.”

“Dad?!” spluttered Vulgar. “Grunt’s more of a Viking than he is.”

At the sound of his name, Grunt opened one eye, chuffed loudly, then went back to sleep. 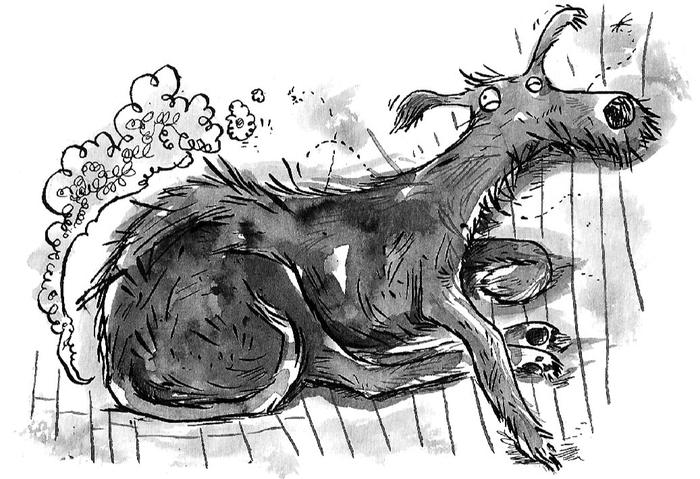 “Right, fine,” sighed Helga, turning back to the log pile. “But wash your hands before breakfast. You look like you’ve been juggling elk poo.” 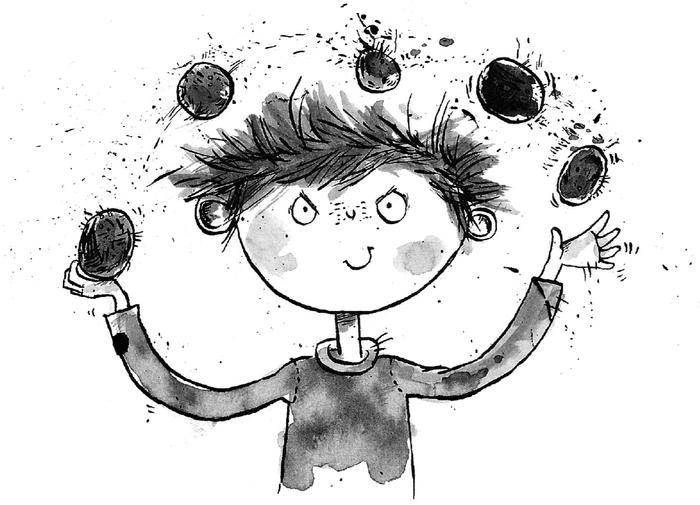 Vulgar looked at his hands. His mum was right. Then again, he
had
been juggling elk poo. It was one of his favourite hobbies.

“No way,” said Vulgar defiantly. He folded his arms in front of him. “Vikings don’t wash their hands. We’d sooner have them cut off.”

Helga hefted her axe and stared hard at her son’s skinny wrists. “That could be arranged,” she growled. 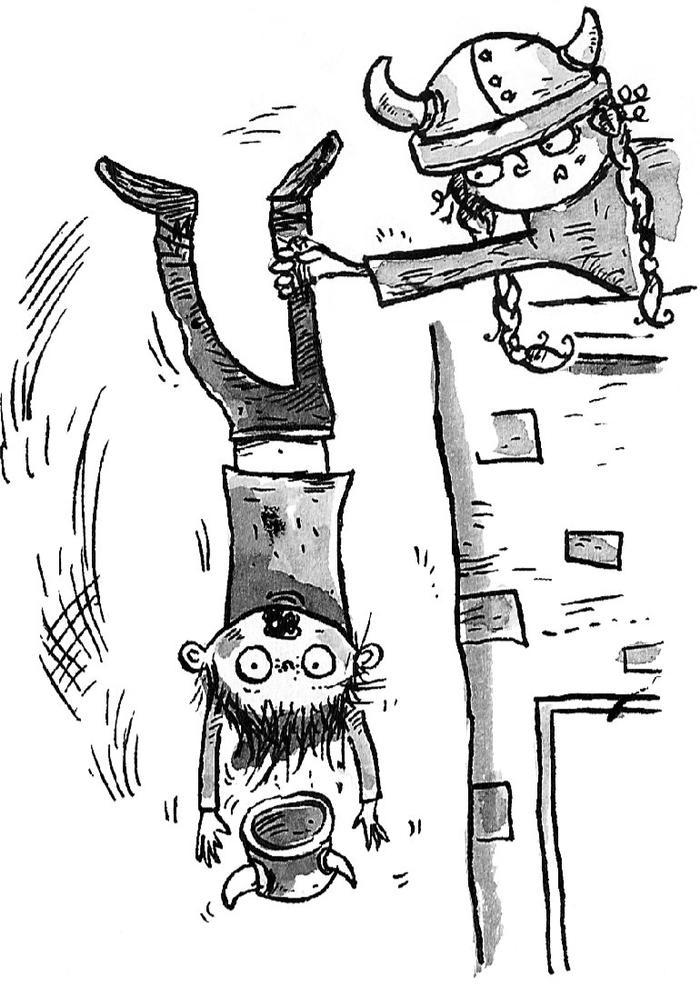 Vulgar gulped. His mum didn’t make idle threats. She’d once dangled him upside down from the window for refusing to cut his toenails. 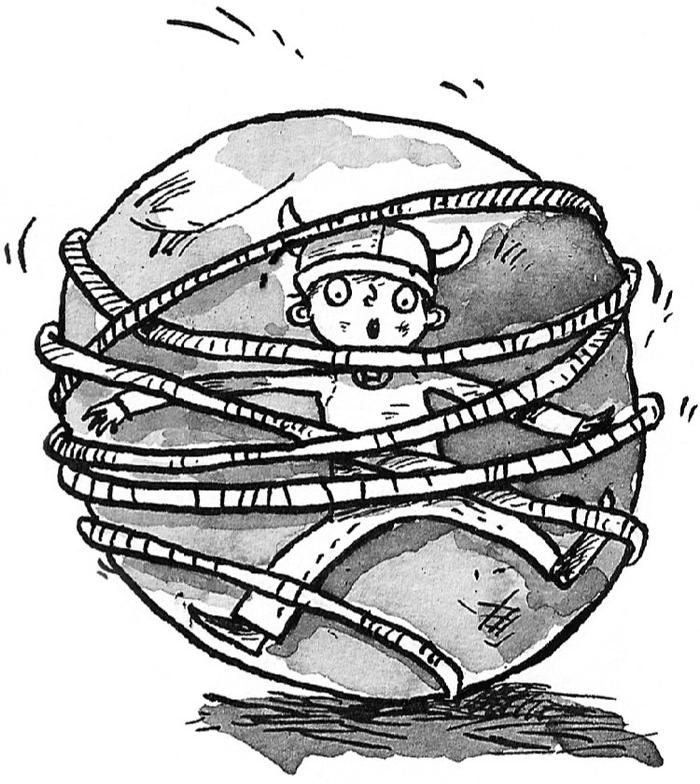 She’d strapped him to a boulder and rolled it down a hill when he’d refused to eat his sprouts. But surely even she wouldn’t go as far as chopping his hands off?

Helga lowered the axe. The corners of her mouth curved into a smile. “Wise move,” she said, turning back to the log pile.

Stepping over the sleeping Grunt, Vulgar approached the large wooden basin the family used for washing. Everything got washed in the basin, from faces to clothes to dirty dishes. By the end of the day, the water would be a dark, murky grey, but at this time in the morning it was crystal clear.

Please
,
thought Vulgar, as he drew closer to the basin,
let
today
be
the
day
…

Taking a deep breath, Vulgar stretched on to his tiptoes and looked at his reflection, shimmering on the water’s surface.

Vulgar wanted many things in life. He wanted a broadsword with a skull for a handle. He wanted a shield made of solid gold and silver. And he wanted to be
strong enough to lift both of them without falling over. 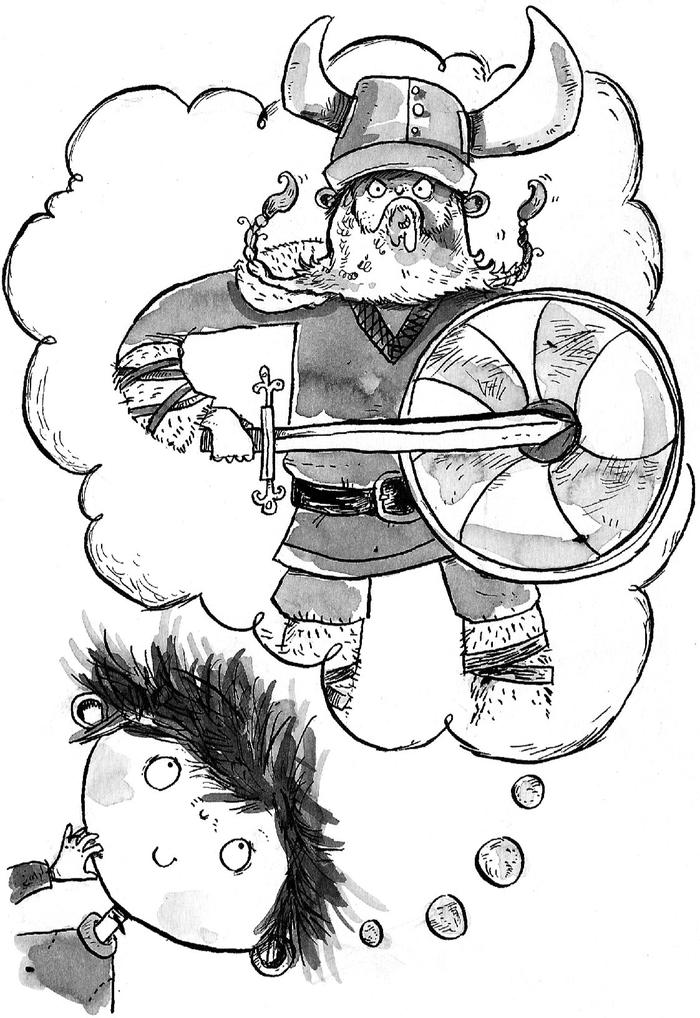 More than anything, though, Vulgar wanted a beard. And not just any beard. He wanted a
proper
beard, like proper Vikings used to have. A big, red beard that forked into two at the bottom, like a horned helmet for his chin.

He waggled his fingers in the water, chasing his reflection away. No beard today. Maybe tomorrow.

Vulgar turned back into the kitchen. A lump of mouldy cheese and a hunk of stale bread lay on the table. 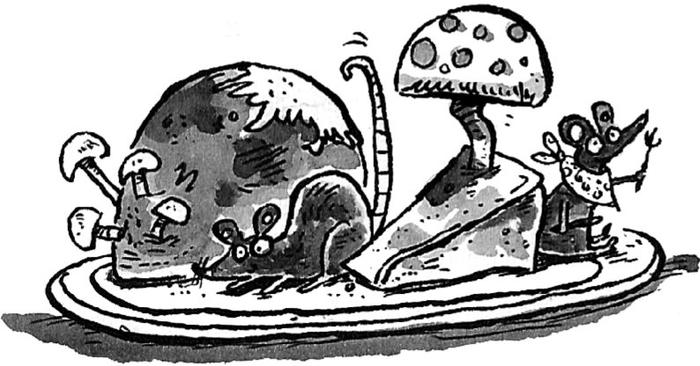 Vulgar pounced on the food, snatching it up before the mice could whisk it away. As he was shoving it into his mouth, the door opened and a skinny man with very clean hair shuffled inside.

“Morning, son. Morning, wife,” said Harald, Vulgar’s dad. He stretched up to his full height and tried to plant a kiss on Helga’s cheek. Being far too short to reach, he only managed to kiss her elbow, but they both seemed happy with that.

Shadows in Savannah by Lissa Matthews
Bonding Camp by Christelle Mirin
Easy and Hard Ways Out by Robert Grossbach
The Lady and Her Doctor by Evelyn Piper
Changeling by Sharon Lee and Steve Miller, Steve Miller
The Girl From Yesterday by Shane Dunphy
City of Cruelty and Copper (Temperance Era) by Paille, Rhiannon
Kate and Julia: Slave Girls of the Raj by Lindsey Brooks
Empty by K. M. Walton
Restart (The Revival Series) by Claire Thake
Our partner