Read What the River Knows Online 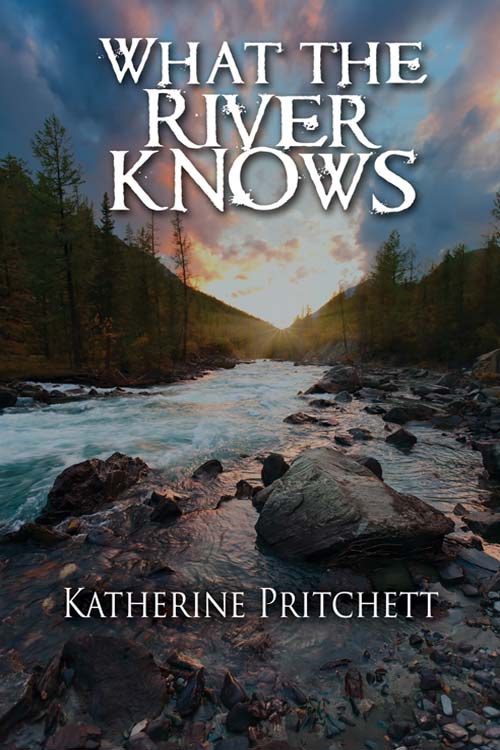 He slowed his pace

within twenty feet of a gray and twisted tree trunk that must have once supported a massive cottonwood, but now instead provided a windbreak that allowed sand to settle in its lee and let shrubs gain a foothold. He looked down the sloping bank of the dike toward the river, noting the lazy flow as it rippled barely a foot deep in half a dozen shallow braided channels within the banks. A gray heron took off from a sand bar, long legs dangling behind him.

He stopped and squatted to view the path from a different angle. Just this side of the tree trunk, he saw indistinct grooves in the sand of the path that could have been made by a body being dragged. Big bluestem waved behind the tree trunk, and a sand plum thicket guarded the north side of the approach. Buffalo grass carpeted the ground from the path to the tree, obscuring any sign from this angle. He stood up again.

Now it looked like there were faint marks in the grass, here and there, that could be drag marks. He continued on the other side of the path, careful not to disturb the sign. At last he was even with the northern edge of the sand plum thicket. Again, he went down to see what he could observe from this angle. He spotted some broken branches and a few tufts of buff fur, where the dog had bounded in to make his discovery and dragged the man in his wake. He followed the path of fur and branches with his eyes, and finally saw something large and too pale a pink to belong in that environment. Reminding himself to stay detached and professional, he stepped up on the tree trunk to get a better view.

Third Place won in the

What
the River Knows

This book is dedicated to justice

for the victim who inspired it,

as well as the many others for whom justice

has yet to be realized.

And to the tireless officers

who never stop thinking about those cold cases,

always alert for that missing link.

Something jarred his sleep. The phone. The phone had done it. It rang again, insistent. Scott Aylward grabbed the back of the couch to raise himself, and the newspaper he had been reading slid from his chest to the floor. The phone jangled once more. “All right, I’m coming,” he growled as he stood. Where was the damn thing anyway? He slipped on the papers he was supposed to be sorting through. Rica would have his ass if he didn’t get this stuff put away or pitched by the time she got home. He had promised and, he eyed the clock by the front door, he had two hours until four. Finally, he found the phone beneath the lid of the pizza box. More stuff to take care of. “Yeah?”

“Aylward?” The voice of Sergeant Mullens punched into his ear. “Get down here, pronto!”

All drowsiness snapped out of Scott Aylward; something had tightened the cadence of Mullens’ usual slow drawl. “What’s up?” He glanced at the scanner on his desk. Damn, he’d forgotten to turn it on. After all, Rica kept telling him that days off should be days off.

“Just get your ass in. We’ll brief you when everybody gets here.”

“I’ll be there in five minutes.” It must be big, to call in all personnel. He took a few seconds to gather all the papers into a box. Crossing the kitchen toward the bedroom with the box in his arms, he remembered the chicken in the refrigerator. He’d at least completed that task today. The breast filets were spiced and in the dish, ready to pop in the oven the minute Rica arrived. He had done that first, hoping a good meal and a clean house would ease some tension. Now it sounded like there would be no supper tonight. He sighed and dropped the box to the floor on his side of the bed. Rica knew what he was when she married him.

He picked up his gun from the nightstand and snapped the holster on his belt over his right hip. Taking a minute to make the bed, sort of, he palmed his ID and badge from the dresser into his pocket.

Pausing by the door, he surveyed the living room. Damn, he’d left his soda can on the coffee table without a coaster. At least whatever it was would delay the argument for a while.

He clattered down the stairs and jumped into his pickup. He debated for a moment while the oil began to circulate through the motor of his fifteen-year-old Ford Ranger pickup before he elected not to flip on the red lights. In just under four minutes, he swung into the parking lot of the Law Enforcement Center, searching for a spot to park, finally pulling onto the lawn at the back. He didn’t want to be late.

He trotted into the conference room in time to grab a cup of overcooked coffee and the last of the Krispy Kreme donuts from the table at the back of the room. He slid into a folding chair just as Mullens stepped to the podium in front of the whiteboard.

“Afternoon, ladies and gentlemen.” Mullens cleared his throat and opened the manila folder he carried. “We’ll run through this quick, so you can get out there on the street.” He pushed the remote on the projector connected to the laptop on the table beside him. The face of a pretty blonde, apparently a driver’s license photo, popped up on the whiteboard, next to what appeared to be a snapshot of her at a picnic. The face in the license photo looked tired, stressed, but the picnic shot showed a woman full of life. “Missing person, Delia Enfield, 29, 5-4, 130, blonde, blue,” Mullens intoned. “Left work at Moran Construction Company at 3:15 yesterday afternoon, with a company bank deposit to make. Never showed up for work this morning, but the office wasn’t too concerned. Ex-husband called her in missing at noon, said they were supposed to meet for lunch.”

He clicked the remote again to show a worn compact car in a parking lot. “Car spotted in the parking lot of the Casa Taco a couple hours ago. Purse on the seat, beside the bank bag with the deposit receipt. Cell phone in the purse. Car unlocked, no signs of struggle.” He faced the officers, the strain of too many briefings like this, with too many tragic endings, etched on his face. “We’re starting to interview all the office staff, Casa Taco employees, bank personnel, the ex-husband, neighbors, acquaintances, family, and so forth.” He sighed. “We need extra eyes and ears on the street and extra personnel to get the interviews done in a timely manner. You all know how important the first hours after a disappearance are.” Clicking the screen to return the woman’s photos to the wall, he consulted the clipboard on the podium before him. “Anderson and Jeffries, you take beat four…”

Scott tuned out the voice, instead staring at the face from the picnic. She looked familiar, as if he’d seen her somewhere in the past, not just a passing glance, but had interacted with her somewhere. He studied it, memorizing it so he would know her if he stumbled across her on patrol.

“Aylward—” Hearing his name, he jerked to attention. “You head to Moran. They have twenty people to interview, and I only have Bates out there now.”

“On the way, Sarge.” He drained the coffee in the bottom of his cup and dumped the dry half of the donut that was left in the trash with the cup. He hopped in his pickup, as there were no spare unmarked cars to take to the construction company at the edge of town. He flipped open his cell to leave a message for Rica on her cell. Just in case she didn’t check her phone when she got off work at the hospital, he left a message on the home phone as well. “Called in to work, not sure when I’ll be off. I’ll call later.”

He flipped it shut and hoped the explanation was enough for her. Lately, she didn’t seem to be so understanding about his dedication to his job, although she never turned down an extra shift in surgery when it was offered. He sighed. He’d just have to deal with however she reacted when he made it home again. He pulled into the gravel parking lot at Moran and parked in the only area left, the “No Parking” zone at the entrance.

Scott flashed his gold detective’s badge at the receptionist and requested Bates. Young and thin, she looked like she was close to tears, and her fingers trembled as she paged the room where Detective Bates was interviewing her co-workers.

She looked up at him. “He said come on down.” She stood and pointed down a hallway. “Turn right. It’s three doors down.” She sat back down and began to fiddle with her pen, staring at the phone console as if it had answers.

“Thanks,” Scott said. He would ask if Bates had interviewed her yet. His gut said she wasn’t a likely suspect, but she was certainly shaken.

He trotted down the hall to the conference room. In every tiny office along the hall, curious faces watched him pass. The narrow rectangular window in the conference room door showed Del Bates on the side of the conference table that faced the door, making notes in his pad while a middle-aged woman, with red hair that looked fairly close to what must have been her original color, sat with her back to the door, shoulders shaking as if she were sobbing. Bates looked up when Scott’s face appeared in the window, and held up his index finger. Scott waited, observing the woman. Bates nodded at something she said, and she stopped to bring a tissue to her face. Bates glanced back at Scott. His coffee looked cold and his face weary. Finally, Bates rose from his chair as the woman stood. She turned to go, her face haggard, and she met Scott’s eyes. He opened the door for her. She brushed past him, still sniffling.