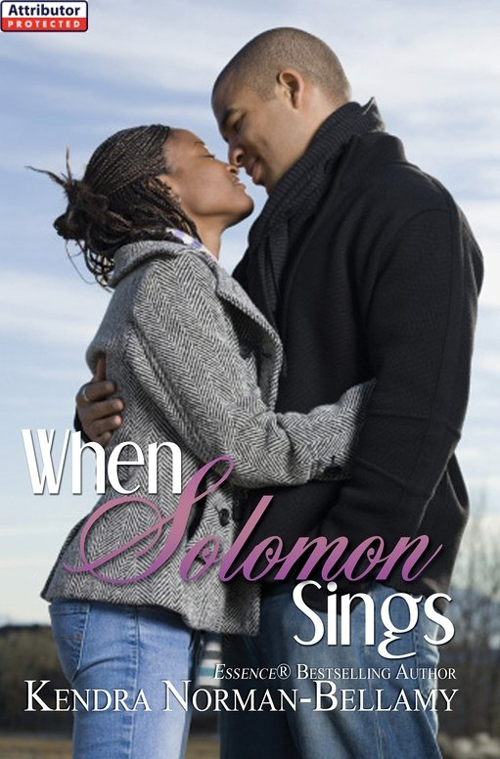 All copyrighted material within is Attributor Protected.
Table of Contents
When Solomon Sings
Title Page
Dedication
ACKNOWLEDGMENTS
PROLOGUE
ONE
TWO
THREE
FOUR
FIVE
SIX
SEVEN
EIGHT
NINE
TEN
ELEVEN
TWELVE
THIRTEEN
FOURTEEN
FIFTEEN
SIXTEEN
SEVENTEEN
EIGHTEEN
NINETEEN
TWENTY
TWENTY-ONE
TWENTY-TWO
TWENTY-THREE
TWENTY-FOUR
TWENTY-FIVE
TWENTY-SIX
TWENTY-SEVEN
EPILOGUE
READERS' DISCUSSION QUESTIONS
ABOUT THE AUTHOR
UC HIS GLORY BOOK CLUB!
Copyright Page
To the Ministry of Melvin Williams and the memory of Bobbie Smith
Â
Â
Melvin
... I've long ago stopped trying to justify or defend my heart connection to you. It is what it is, and people's opinions no longer matter to me. I can't expect them to understand. They weren't there on that April evening in 1996, during what was the absolute darkest time of my life, when God used you to breathe life back into my dying spirit. In the prelude of my favorite Melvin Williams album (
Never Seen Your Face
) you said, “Singing, for me, is a ministry. It's about giving people hope, faith, love, and encouragement. And I feel like if I accomplish that, my singing is not in vain.” I am a witness to the fact that God has used your ministry to do just that. You are an amazing man with an anointed voice, and I count you among my angels and my heroes. I will always be your greatest admirer, and you will forever be my all-time favorite gospel legend. Don't ever stop singing.
Â
Â
Bobbie
... It's hard to believe that a year has passed since I received the news of your transition on January 25, 2011. You were a remarkable woman who was like family to me long before we ever met in person. Thank you for being one of my greatest cheerleaders and most dedicated supporters. Even in our last conversation, during your time of grave illness, you never once complained. Instead you were still encouraging me to keep writing and publishing great stories of faith. You made my heart sing, and I will miss you always.
ACKNOWLEDGMENTS
In everything give thanks for this is the will of God concerning you.
(I Thessalonians 5:18)
My Father, my God!
I can't begin to thank you enough for all that you have done and continue to do for and through me. Regardless of how high I am allowed to be elevated in this journey, you alone, Lord, will forever get the glory. This is my promise to you.
To my home base foundation,
Jonathan, Brittney,
and
Crystal:
Thank you for your ongoing support of my writing ministry. Every writer can't say that they have the endorsement of their family, so I count myself especially blessed.
To
Daddy
and
Mama (Bishop Harold
&
Mrs. Francine Norman):
I love you dearly. Thank you for loving me to life! I am truly blessed to have you as my parents.
Crystal, Harold Jr., Cynthia,
and
Kimberly:
Birth made us siblings, but hearts make us friends. I love you guys!
Jimmy
(1968-1995): Thanks for being my guardian angel. You are forever missed.
To
Terrance:
What would I do without you, cuz? Thanks for everything!
Aunt Joyce
and
Uncle Irvin:
Thank you for being the best godparents in the world.
Carlton:
Thanks for your legal representation. You are so appreciated.
To the dynamic design duo,
Lisa
and
April
(a.k.a. Papered Wonders, Inc.): For nine years, you have made me look fabulous on paper. Thank you for your endless creative genius.
To my sorors of
Iota Phi Lambda Sorority, Inc. (IÎ¦Î)
and especially to the dynamic divine divas of the
Delta Chapter:
Turtle hugs and White Rose kisses go out to each of you for being my support system, my safety net, and my sister friends for life. I-PHIIIIIIII!!!!!
To the awesome women of the other outstanding organizations that have enhanced my lifeâ
Bossettes,
the
Daughters of Christ Sorority, Inc.,
and the
National Council of Negro Women:
Thank you for the wonderful connections, experiences, and memories that will surely last a lifetime.
To all of those who have partnered with me in the ministries of
KNB Publications LLC, The I.S.L.A.N.D. Movement, Cruisin' For Christ, Pages of Grace Book Club, Gospel Girls Group,
and
M-PACT Writers:
Thank you for sharing in the vision.
To
Bishop Johnathan & Dr. Toni Alvarado:
Words can't express how blessed I feel to be connected to the vine that is
Total Grace Christian Center.
Thank you for my spiritual home away from home.
A special shout-out to
Shawneda Marks
, for permitting me to use one of her crazy one-liners in this story. Thanks, girl (you so crazy)!
Last, but never least, to those who provided the music and melody that streamed through my speakers and kept me motivated as I wrote this novelâ
Melvin Williams, VaShawn Mitchell, Brian McKnight, Antonio Allen, Vanessa Bell Armstrong, Fred Hammond, The Williams Brothers, Maxwell, Wes Morgan, Lowell Pye,
and
Isaac Caree:
Thank you all! And a special thank you goes to Oprah's Karaoke Challenge winner,
Abraham McDonald,
for actually taking the time to call me and sing “Happy Birthday” to me over the phone. Told ya I was gonna give you a shout-out, Abe!

Finding Trust (Centre Games) by Natalie Gayle
Trapped at the Altar by Jane Feather
Under the Sea Wind by Rachel Carson
Chasing After Him by Lynn Burke
Backstage Nurse by Jane Rossiter
Psychic Warrior by Bob Mayer
The Devil's Closet by Stacy Dittrich
The Great Fossil Enigma by Simon J. Knell
Dead End by Cynthia Harrod-Eagles
The Blood That Stains Your Hands by Douglas Lindsay
Our partner