Read Why Marx Was Right Online 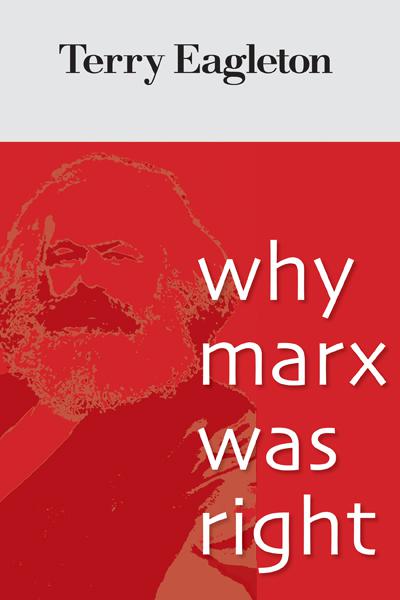 Why
Marx Was Right

Published with assistance
from the Louis Stern Memorial Fund. Copyright © 2011 by Yale University. All
rights reserved. This book may not be reproduced, in whole or in part,
including illustrations, in any form (beyond that copying permitted by Sections
107 and 108 of the U.S. Copyright Law and except by reviewers for the public
press), without written permission from the publishers.

Designed by James J.
Johnson and set in Granjon Roman type by Keystone Typesetting, Inc. Printed in
the United States of America.

A catalogue record for this
book is available from the British Library.

This paper meets the
requirements of ANSI/NISO Z39.48—1992 (Permanence of Paper).

For Dom and Hadi

T
his book had its origin in a
single, striking thought: What if all the most familiar objections to Marx's
work are mistaken? Or at least, if not totally wrongheaded, mostly so?

This is not to suggest
that Marx never put a foot wrong. I am not of that leftist breed that piously
proclaims that everything is open to criticism, and then, when asked to produce
three major criticisms of Marx, lapses into truculent silence. That I have my
own doubts about some of his ideas should be clear enough from this book. But
he was right enough of the time about enough important issues to make calling
oneself a Marxist a reasonable self-description. No Freudian imagines that
Freud never blundered, just as no fan of Alfred Hitchcock defends the master's
every shot and line of screenplay. I am out to present Marx's ideas not as
perfect but as plausible. To demonstrate this, I take in this book ten of the most
standard criticisms of Marx, in no particular order of importance, and try to
refute them one by one. In the process, I also aim to provide a clear,
accessible introduction to his thought for those unfamiliar with his work.

The
Communist Manifesto
has been described as ''without doubt the single most influential text written
in the nineteenth century.''
1
Very few thinkers, as opposed to
statesmen, scientists, soldiers, religious figures and the like, have changed
the course of actual history as decisively as its author. There are no
Cartesian governments, Platonist guerilla fighters or Hegelian trade unions.
Not even Marx's most implacable critics would deny that he transformed our
understanding of human history. The antisocialist thinker Ludwig von Mises described
socialism as ''the most powerful reform movement that history has ever known,
the first ideological trend not limited to a section of mankind but supported
by people of all races, nations, religions and civilisations.''
2
Yet
there is a curious notion abroad that Marx and his theories can now be safely
buried—and this in the wake of one of the most devastating crises of capitalism
on historical record. Marxism, for long the most theoretically rich,
politically uncompromising critique of that system, is now complacently
consigned to the primeval past.

That crisis has at least
meant that the word ''capitalism,'' usually disguised under some such coy
pseudonym as ''the modern age,'' ''industrialism'' or ''the West,'' has become
current once more. You can tell that the capitalist system is in trouble when
people start talking about capitalism. It indicates that the system has ceased
to be as natural as the air we breathe, and can be seen instead as the
historically rather recent phenomenon that it is. Moreover, whatever was born
can always die, which is why social systems like to present themselves as
immortal. Rather as a bout of dengue fever makes you newly aware of your body,
so a form of social life can be perceived for what it is when it begins to break
down. Marx was the first to identify the historical object known as
capitalism—to show how it arose, by what laws it worked, and how it might be
brought to an end. Rather as Newton discovered the invisible forces known as
the laws of gravity, and Freud laid bare the workings of an invisible
phenomenon known as the unconscious, so Marx unmasked our everyday life to
reveal an imperceptible entity known as the capitalist mode of production.

I say very little in this
book about Marxism as a moral and cultural critique. This is because it is not
generally raised as an objection to Marxism, and so does not fit my format. In
my view, however, the extraordinarily rich, fertile body of Marxist writing in
this vein is reason in itself to align oneself with the Marxist legacy.
Alienation, the ''commodification'' of social life, a culture of greed,
aggression, mindless hedonism and growing nihilism, the steady hemorrhage of
meaning and value from human existence: it is hard to find an intelligent
discussion of these questions that is not seriously indebted to the Marxist
tradition.

In the early days of
feminism, some maladroit if well-meaning male authors used to write ''When I
say 'men,' I mean of course 'men and women.' '' I should point out in similar
vein that when I say Marx, I quite often mean Marx and Engels. But the
relationship between the two is another story.

I am grateful to Alex
Callinicos, Philip Carpenter and Ellen Meiksins Wood, who read a draft of this
book and made some invaluable criticisms and suggestions.

Marxism is finished. It
might conceivably have had some relevance to a world of factories and food
riots, coal miners and chimney sweeps, widespread misery and massed working
classes. But it certainly has no bearing on the increasingly classless,
socially mobile, postindustrial Western societies of the present. It is the
creed of those who are too stubborn, fearful or deluded to accept that the
world has changed for good, in both senses of the term.

That Marxism is finished
would be music to the ears of Marxists everywhere. They could pack in their
marching and picketing, return to the bosom of their grieving families and
enjoy an evening at home instead of yet another tedious committee meeting.
Marxists want nothing more than to stop being Marxists. In this respect, being
a Marxist is nothing like being a Buddhist or a billionaire. It is more like
being a medic. Medics are perverse, self-thwarting creatures who do themselves
out of a job by curing patients who then no longer need them. The task of
political radicals, similarly, is to get to the point where they would no
longer be necessary because their goals would have been accomplished. They
would then be free to bow out, burn their Guevara posters, take up that
long-neglected cello again and talk about something more intriguing than the
Asiatic mode of production. If there are still Marxists or feminists around in
twenty years' time, it will be a sorry prospect. Marxism is meant to be a
strictly provisional affair, which is why anyone who invests the whole of their
identity in it has missed the point. That there is a life after Marxism is the
whole point of Marxism.

There is only one problem
with this otherwise alluring vision. Marxism is a critique of capitalism—the
most searching, rigorous, comprehensive critique of its kind ever to be
launched. It is also the only such critique that has transformed large sectors
of the globe. It follows, then, that as long as capitalism is still in
business, Marxism must be as well. Only by superannuating its opponent can it
superannuate itself. And on the last sighting, capitalism appeared as feisty as
ever.

Most critics of Marxism
today do not dispute the point. Their claim, rather, is that the system has
altered almost unrecognizably since the days of Marx, and that this is why his
ideas are no longer relevant. Before we examine this claim in more detail, it
is worth noting that Marx himself was perfectly aware of the ever-changing
nature of the system he challenged. It is to Marxism itself that we owe the
concept of different historical forms of capital: mercantile, agrarian,
industrial, monopoly, financial, imperial and so on. So why should the fact
that capitalism has changed its shape in recent decades discredit a theory that
sees change as being of its very essence? Besides, Marx himself predicted a
decline of the working class and a steep increase in white-collar work. We
shall be looking at this a little later. He also foresaw so-called
globalisation—odd for a man whose thought is supposed to be archaic. Though
perhaps Marx's ''archaic'' quality is what makes him still relevant today. He is
accused of being outdated by the champions of a capitalism rapidly reverting to
Victorian levels of inequality.

In 1976, a good many
people in the West thought that Marxism had a reasonable case to argue. By
1986, many of them no longer considered that it had. What exactly had happened
in the meanwhile? Was it simply that these people were now buried under a pile
of toddlers? Had Marxist theory been unmasked as bogus by some world-shaking
new research? Did we stumble upon a long-lost manuscript by Marx confessing
that it was all a joke? It was not that we discovered to our dismay that Marx
was in the pay of capitalism. This is because we knew it all along. Without the
Ermen & Engels mill in Salford, owned by Friedrich En-gels's
textile-manufacturing father, the chronically impoverished Marx might well have
not survived to pen polemics against textile manufacturers.

Something had indeed
happened in the period in question. From the mid-1970s onwards, the Western
system underwent some vital changes.
1
There was a shift from
traditional industrial manufacture to a ''postindustrial'' culture of
consumerism, communications, information technology and the service industry.
Small-scale, decentralised, versatile, nonhierarchical enterprises were the
order of the day. Markets were deregulated, and the working-class movement
subjected to savage legal and political assault. Traditional class allegiances
were weakened, while local, gender and ethnic identities grew more insistent.
Politics became increasingly managed and manipulated.