BOOK: Witch Switch
5.95Mb size Format: txt, pdf, ePub
Read Book Download Book
ads
Isobel didn't answer him. Instead, she called out, “Wait up, Rachel,” as she raced to catch up with her friend.
“What wimps,” Kevin shouted, loudly enough for the fifth-grade girls to hear him.
Just then, a whole flock of geese flew from the roof of the house. Their wild honking grew louder and louder as they passed overhead. They seemed to cover the whole sky as they zoomed away.
“Those birds sure look scared,” Kadeem gulped. “If that place is too creepy for them, it's too creepy for me.”
“You're not kidding,” Manny agreed. “I don't need to see any witch. I believe you, Katie.”
“Um ... Katie,” Jeremy said, “you know, this took a little longer than I thought it would. I gotta get to soccer practice.” He started to head back toward his house.
Katie turned to him and frowned. Some best friend he was.
“Well, if Jeremy's leaving, I'm going, too,” Becky Stern said. She hurried to catch up to Jeremy.

Soon the only people left were Katie, Kevin, George, and Benjamin.
“Okay, Katie, prove to us that there really is a witch living there,” Benjamin said. “Ring the doorbell.”
“Yeah, go ahead, Katie,” Kevin urged. “I want to tell Ian that I saw a real witch.”
Katie stood there for a moment, staring at the big cobweb-covered house. She did not want to go up those steps. She wanted to run away as fast as she could!
“Come on, Katie,” Benjamin insisted. “Do it . . .
unless you're scared
.”
“I . . . I . . . I'm not scared,” Katie stammered, sounding very scared indeed.
“Then go ahead,” Benjamin said.
Slowly, Katie walked up the rickety old wooden stairs that led to the front porch. She could hear the squeaking under her feet. There was a big black spider spinning a web on the banister.
“Eeek!!” Katie jumped up with surprise as a rat scampered into the bushes near the porch.
“I'm out of here!” Kevin shouted at the sound of Katie's scream.
“Right behind you, buddy,” George added, running off.
Benjamin didn't say a word. He just took off.
Oh, no! This was
too
creepy. There was no way Katie was going to ring that doorbell. She didn't care if the kids called her a scaredy-cat for the rest of her life!
“Hey, wait for me!” Katie cried out. She didn't want to be left there all alone.
But before Katie could run after the boys, she felt a cool breeze blowing on the back of her neck. She pulled her jacket tighter around her, but she could still feel a slight draft.
And then the breeze began to get really strong. Katie looked at the trees. Their leaves weren't moving. The grass wasn't blowing, either. In fact, the wind didn't seem to be blowing anywhereâexcept around Katie. Which could only mean one thing.
The magic wind was back!
The magic wind grew stronger and stronger, whirling around Katie so powerfully that she thought it would blow her away. She closed her eyes and tried not to cry.
And then it stopped. Just like that.
The magic wind was gone. And so was Katie.
She'd turned into someone else.
But who? 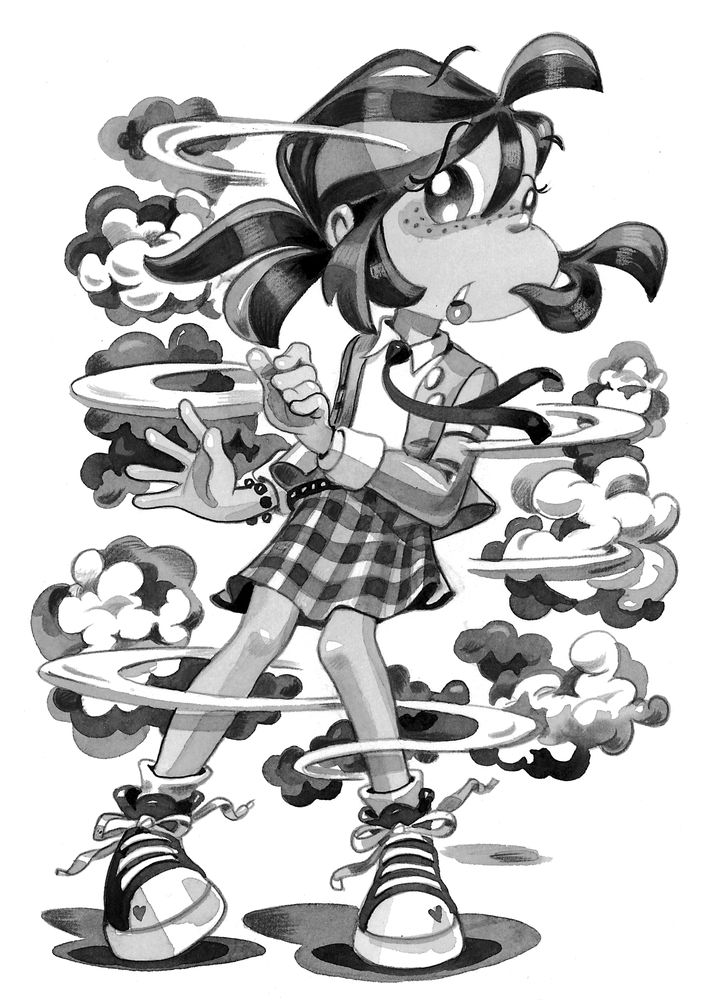 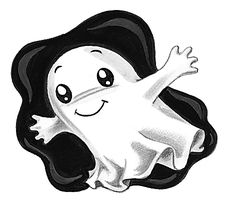 Chapter 11
“AHHHHHHH!” Katie screamed the loudest she ever had. When she opened her eyes, she found herself standing in front of a cracked mirror. The face that stared back at her had a long chin, a pointed nose, and gray and black hair with cobwebs hanging from it.
Oh, no! The magic wind had turned Katie into the Witch of Elm Lane!
“AAAAAAHHHHHHHHHHHHH!” she screamed again.
Bong. Bong. Bong. Bong.
Clang. Clang. Clang. Clang.
Cuckoo. Cuckoo. Cuckoo. Cuckoo.
Suddenly, a bunch of really odd noises began ringing throughout the old house. Katie jumped. Her hands started to shake. Ghosts! The house was filled with ghosts! And they were coming to get her! 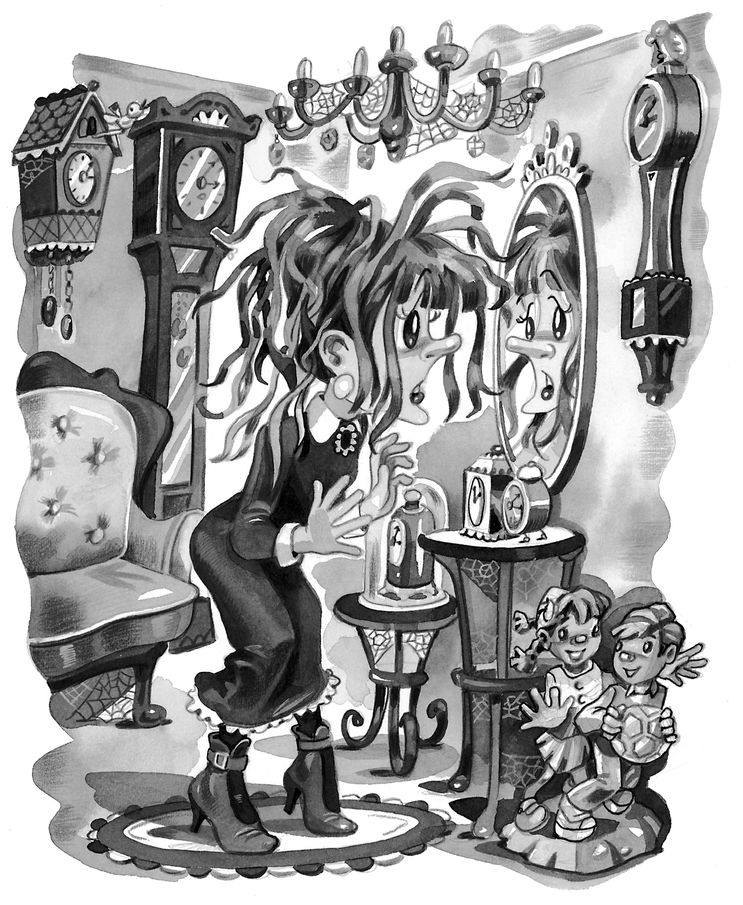 Katie turned and looked for a place to hide. Maybe under the table, where that little glass clock was. Or maybe behind the big grandfather clock in the corner. Or under the big green sofa next to the cuckoo clock.
Boy, there sure are a lot of clocks in here
, Katie thought.
They're everywhere.
And that's when she realized what was happening. There weren't any ghosts in the house. All those noises were coming from the clocks. It was four o'clock, and they were all ringing at once.
Katie sat down in a wooden rocking chair and tried to catch her breath. She looked around the room for a minute.
It was strange, but the house didn't look nearly as scary from the inside as it did from the outside. Sure, it was really dirty, with dust and cobwebs everywhere. But there were nice things inside, too. Like the big, cushiony green velvet couch across the room.
And there was a beautiful stone sculpture of children playing in the corner of the room.
Overhead, a huge crystal chandelier hung from the ceiling. Even though it was covered with dust, Katie thought it was beautifulâlike something you would see in a giant mansion.
Actually, the haunted house on Elm Lane really wasn't that scary after all.
Slowly, Katie stood up and began to look around. On the table in the hallway, she found another clock. This one was gold-colored. It sat inside a shiny glass dome.
The kitchen was just down the hall. Katie gulped as she walked into the room. There, on the stove, was a huge black pot.
The witch's cauldron! Katie sure hoped there wasn't any horrible potion cooking in there. Slowly, she walked over and peered inside the pot. Phew! It was empty.
Katie plopped down on one of the rickety wooden chairs and looked around the kitchen. It sure was old and dirty. The blood-red paint on the walls was chipping, and the ceiling had cracks in it. Still, someone had put up new red-and-white-checked curtains, and there were fresh flowers on the windowsill.
“That's weird,” Katie muttered to herself. “What kind of a witch puts up curtains?”
Then, suddenly, something on the kitchen counter caught her eye. Three bright orange pumpkins were lined up in a row. Each one had been carefully carved into a jack-o'lantern. But not just any old jack-o'-lanterns.
These
pumpkins were amazing! One had a cat carved into it. Another had a ghost shape. The third pumpkin was only half-carved. Katie wasn't sure what it was going to be. She moved a little closer to get a better look. Maybe she could guess ...
CRASH!
Oh, no! As Katie turned around, her rear end knocked over a silver clock that had been sitting on the counter. The glass that covered the face of the clock broke into about a hundred pieces.
I've got to clean this up,
Katie thought
. If the witch finds out I've broken her clock, she's going to be really mad at me!
Quickly, she searched for something to clean up the mess. She spotted an old straw broom with a wooden handle. It was leaning against a wall in the corner of the room. 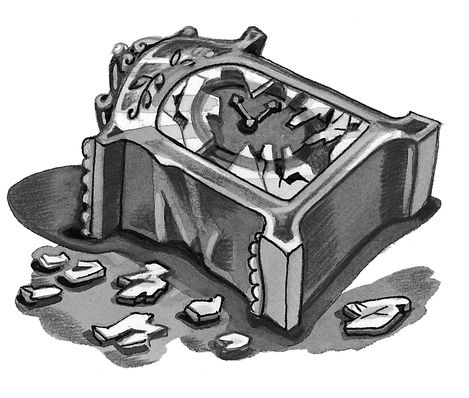 Katie looked at the broom for a minute, not sure of what to do. Was that a regular broom? Or was that a magical witch's broom? Should she touch it? Would she start flying if she did?
“Wait a minute! I'm a witch now,” Katie said to herself. “Maybe I can just put a spell on the broom and it will do all the cleaning up by itself.”
There was only one problem: Katie didn't know any witch spells.
“Maybe I can make one up,” Katie decided. She thought for a moment. Then she chanted, “Wood and straw make a broom. Now sweep up the glass in this room.”
Katie stared at the broom. It didn't move. If Katie was going to clean the room, she was obviously going to have to do it the normal way.
She reached over and gently touched the broom. The wood felt smooth, just like the wood on her broom at home.
Katie wrapped both of her hands around the handle. Her feet stayed on the floor, and she didn't start flying around the room. That was a good sign.
Slowly, she began to sweep up the broken glass. With each movement of her hand, the glass moved across the floor into a neat little pile.
Phew.
It was definitely just a regular, everyday broom.
In a few moments, Katie had cleaned up all of the shattered glass. She glanced over at the broken clock. It had been really pretty. But now it was kind of dented, and there was no glass to cover the hands. Katie had ruined the clock. She felt terrible about that.
There had to be some way she could make up for breaking the clock. But what?
Katie thought about the curtains and the flowers. Was it possible the witch had been trying to clean up around here? Did witches even do things like that?
Maybe. Katie didn't really know a whole lot about witches, actually. And if the witch was trying to make her house prettier, Katie could definitely help her out with that.