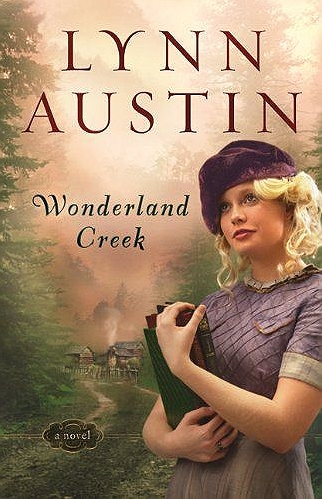 All rights reserved. No part of this publication may be reproduced, stored in a retrieval system, or transmitted in any form or by any means—electronic, mechanical, photocopying, recording, or otherwise—without the prior written permission of the publisher. The only exception is brief quotations in published reviews.

Scripture quotations are taken from the King James Version of the Bible.

I
f my life were a book, no one would read it. People would say it was too boring, too predictable. A story told a million times. But I was perfectly content with my life—that is, until the pages of my story were ripped out before I had a chance to live happily ever after.

The end came, appropriately enough, at a funeral. Not my own funeral—I’m only twenty-two years old—but Elmer Watson’s funeral. He was a kindly old gentleman who patronized the public library here in Blue Island, Illinois, where I have worked as a librarian for the past year and a half. I knew Mr. Watson—or I suppose it would be more accurate to say that I knew his taste in books and magazines—and I thought very highly of him because of his reading preferences.

When I heard that his funeral would be held that day, I walked to the funeral parlor after work and took a seat in the back row by myself. My father, Reverend Horace Ripley, conducted the service. But first an entire host of Mr. Watson’s boring relatives—long-lost cousins, sons, nephews, and in-laws—decided to get up and tell long-winded stories about how Elmer had once walked to the store with them, or bought a horse from them, or some such inane piece of history. None of these people could tell a decent story to save his life. I wasn’t the only one in the audience who was yawning.

As the dreary eulogies dragged on and on, I pulled a book from my bag and began to read. I thought I was being quite subtle about it, glancing up every now and then, and nodding in sympathy as another one of Mr. Watson’s fine character traits was eulogized. I could have added that he always returned his books to the library on time, but why prolong the service?

That’s when my boyfriend, Gordon T. Walters, son and grandson of the funeral directors, tiptoed up behind me and slipped into the chair beside mine. I quickly finished reading the paragraph and stuck a bookmark in place before closing the book.

I expected Gordon to reach for my hand, but he didn’t. He sat so stiffly beside me, all buttoned up in his dour black suit, that he might have been a corpse like poor Mr. Watson. I looked up at Gordon and smiled, but he gave me a funereal frown and shook his head. I hadn’t realized that he knew Elmer Watson, but why else would he act so somber? When the service finally ended and we stepped outside through a side door, away from the other mourners, I discovered the reason.

“You were reading a
book
during a
funeral
?” he asked as if horrified. “Alice, how could you?”

“Well . . . it was a very good book,” I said with a little shrug. “I couldn’t help myself. I needed to find out what happened to the heroine.”

“What difference does it make what happens in a stupid book? It isn’t real. It’s a made-up story. But a funeral, Alice—a funeral is real life!” He was gesturing wildly, as if unable to convey his outrage with mere words. I reached for his hand, but he wouldn’t let me take it. We stood in a beam of weak February sunlight outside the funeral parlor where Gordon lived and worked, and we were an oddly mismatched couple—Gordon tall and dark-haired, myself, short and blond. Patches of snow dotted the grass and lay in dirty mounds around the parking lot as black-clothed mourners climbed into their cars for the trip to the cemetery. Mr. Walters sometimes needed Gordon to drive the hearse, but not today. Most of the time Gordon worked in the office, ordering coffins and collecting receipts and paying bills.

“I’m sorry,” I told him, “but when a book is as well-written as this one is, it
seems
just like real life to me and I—”

“But reading at a
funeral
? This was a once-in-a-lifetime event. Elmer Watson will never be buried again.”

“I certainly hope not,” I muttered beneath my breath. “Anyway, I’m sure he wouldn’t have minded. He used to come into the library all the time to check out books. He was a very nice man.”

“You could have shown more respect for his family.”

“They couldn’t even see me. I was sitting in the last row.” I didn’t understand Gordon’s outrage or why he was making such a big issue of this. “Come on,” I said, taking his arm. “Walk me home.”

“No.” He peeled my hand away. “Why did you come to the funeral in the first place if you weren’t going to pay your respects? And you weren’t very respectful, Alice. If you wanted to read your stupid book, you should have stayed home.”

I had been trying to make light of the incident until now because I honestly couldn’t see why it bothered him so much. His unreasonable behavior made me defensive. “I didn’t
plan
on reading—you make me sound like such a horrible person. But I started the chapter during my lunch break at work, and then I had to stop right in the middle of it when my hour was up. All afternoon I’ve been dying—pardon the expression—to find out what happened. So when the eulogies went on and on and I couldn’t stop thinking about the characters, I decided to take just a tiny peek and . . . and how was I supposed to know that I would get pulled back into the story again? It’s a wonderful book, Gordon.”

He didn’t seem to hear a word I said. He continued to glare at me with the solemn gaze perfected by his forefathers and immortalized in their portraits, now hanging in the mortuary’s entrance hall. “I’ve been to hundreds of funerals,” he said, which was no exaggeration since he’d been born in the apartment above the funeral parlor. “But I’ve never seen anyone reading a book during a memorial service.” He was upset. I had to take this more seriously.

“Again, I’m sorry, Gordon. From now on I will eschew reading novels during funerals.”

“I said, I will eschew reading. It means to abstain from or avoid something.” I had been waiting for an opportunity to use the word
eschew
after discovering it in my favorite literary journal and looking up the meaning. It had such a refined, tasteful sound to it—a wrinkle-your-nose, tut-tut quality. I thought this would be the perfect opportunity to try it out. How could I have known that the word would further infuriate Gordon?

“Confound it, Alice! Sometimes you act like you think you’re better than everyone else.”

“Wait. Are you calling me pretentious?”

“Listen, I can’t help it if I have a broad vocabulary. I acquired it from reading.”

“Did you ever stop to think that maybe you read too much?”

“That’s absurd,” I said with a little laugh. “Nobody can read too much. That’s like saying someone breathes too much.”

He sighed. His shoulders sagged. He shook his head. I thought he was going to say,
You’re right. Let’s forget it.
But he didn’t.

“Fight about stupid things like books and big words. You live in a different world than I do. Everything you talk about comes from a book, not real life. I want a girl who has both feet on the ground. And more important, one whose nose isn’t stuck in a book all day.”

“I work in a library,” I told him. “Books are my livelihood, just like funerals are your livelihood. Do I complain because you’re surrounded by caskets and corpses all day?”

Gordon tipped his hat to a group of mourners as they walked past us on the way to their cars. When they were gone, he turned to me and said, “I don’t think we should see each other anymore.”

“What?” I felt a twinge of panic. We’d had arguments before, but this one had gone too far. “Are you mad because I use words you don’t understand or because I couldn’t help reading just a teensy bit during the boring part of a funeral?”

“Both. We don’t have anything in common.”

“But . . . but we’ve been dating for nearly a year and—” I stopped before blurting out that everyone considered us a couple or that our parents expected us to marry.

A Brief History of Male Nudes in America by Dianne Nelson, Dianne Nelson Oberhansly
Half of Paradise by James Lee Burke
To Kill Rasputin: The Life and Death of Grigori Rasputin (Revealing History) by Cook, Andrew
Ava's Pleasure (Welcome to Paradise) by Heidi Lynn Anderson
Trunk Show Murder (A Seagrove Cozy Mystery Book 2) by Leona Fox
Loving an Ugly Beast by Monsch, Danielle
Fire on the Water by Joe Dever
Valley Of Glamorgan by Julie Eads
Muscling In by Lily Harlem
Collateral Damage by H. Terrell Griffin
Our partner