Read Would You Kill the Fat Man Online

Would You Kill the Fat Man 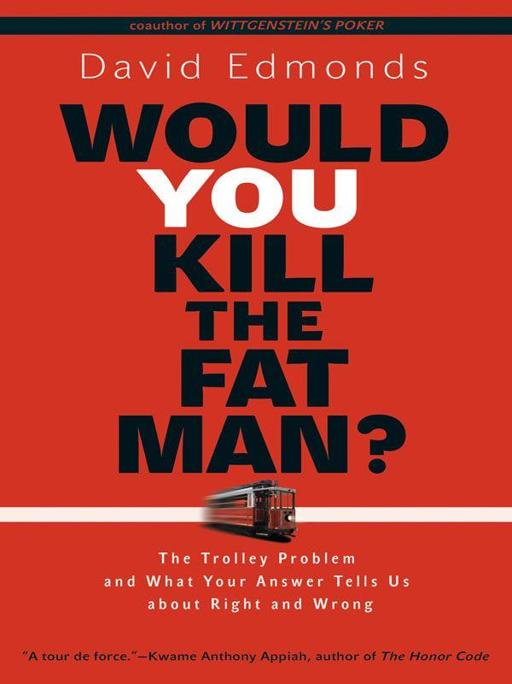 Would
You
Kill the Fat Man?

Would
You
Kill the Fat Man?

This book has been composed in Electra and Syntax

To Liz, Isaac, and Saul

(an undiscriminating fan of wheels, trains, and trolleys)

(sung by Judy Garland in
Meet Me in St. Louis
)

The levity of the examples is not meant to offend.

THIS BOOK IS GOING TO LEAVE in its wake a litter of corpses and a trail of blood. Only one animal will suffer within its pages, but many humans will die. They will be mostly blameless victims caught up in bizarre circumstances. A heavyset man may or may not topple from a footbridge.

Fortunately, almost all these fatalities are fictional. However, the thought experiments are designed to test our moral intuitions, to help us develop moral principles and thus to be of some practical use in a world in which real choices have to be made, and real people get hurt. The point of any thought experiment in ethics is to exclude irrelevant considerations that might cloud our judgment in real cases. But the experiment has to have some structural similarities with real cases to be of use. And so, in the forthcoming pages, you will also read about a few episodes involving genuine matters of life and death. Making cameo appearances, for example, will be Winston Churchill, the twenty-fourth president of the United States, a German kidnapper, and a nineteenth-century sailor accused of cannibalism.

Thought experiments don’t exist until they have been thought up. Books covering philosophy tend, rightly, to focus on ideas, not people. But ideas do not emerge from a vacuum; they are the product of time and place, of upbringing and personality. Perhaps they have been conceived as a rebuttal to other ideas, or as a reflection of the concerns of the moment. Perhaps they reflect a thinker’s particular preoccupation. In any case, intellectual history is fascinating, and I wanted to weave in the stories of one or two of those responsible for the ideas on which this book is based.

There is a reason why the crime at the heart of this book, the killing of the fat man, has never been fully solved, philosophically: it is complicated … really complicated. Questions that, at first glance, appear straightforward—such as “When you pushed the fat man, did you
intend
to kill him?”—turn out to be multi-dimensional. A book that attempted to address every aspect of all the fraught issues raised by the killing would be ten times the length of this one. In any case, although some of the intricacies can’t be avoided—indeed, they provide much of the scholarly excitement—my aim was to write a book that did not require readers to hold a philosophy PhD.

When I first came across the trolley problem I was an undergraduate. When the fat man was introduced to philosophy I was a postgraduate. That was a long time ago. Since then, though, what has reignited my interest has been the perspective brought to bear on the problem from several other disciplines.

My hope is that the text that follows will give some insight into why philosophers and non-philosophers alike have found the fat man’s imaginary death so fascinating.

THIS IS A DULL BIT FOR THE READER, but a welcome opportunity for the author—the acknowledgment of debts. And I have a trolley load of people to thank.

Second, thanks to another set of philosophers who have read part or all of the manuscript. No doubt there are still errors in the book, but that there aren’t more of them is down to Steve Clarke, John Campbell, Josh Greene, Guy Kahane, Neil Levy, John Mikhail, Regina Rini, Simon Rippon, Alex Voorhoeve, and David Wiggins (and Nick Shea, for helping me decipher Professor Wiggins’s handwriting).

Third, thanks to those who assisted with material for the biographical section—Lesley Brown, M.R.D. Foot (who, sadly, has passed away), Sir Anthony Kenny, and Daphne Stroud, a former tutorial partner of Philippa Foot’s.

Fourth, I appreciate assistance I received from journalists at the BBC and
Prospect
. Colleagues at the BBC were crucial during this book’s germination stage. Jeremy Skeet helped to commission a two-part BBC World Service series on the subject, which was presented by the estimable Steve Evans, an economist with an insatiable curiosity, who would have made an excellent philosopher. For the past few years I’ve been contributing philosophy articles to
Prospect
, in which some of this material was given a first airing. James Crabtree (now of the
Financial Times
) and the former editor, David Goodhart, commissioned articles on subjects that other periodicals would shy away from. If it’s possible to plagiarize one’s own work, then I’m guilty in one or two places of doing so. The chapter on experiments in philosophy relies on some of the research done for an interview, co-written with Nigel Warburton, on the X-Phi movement. And I’ve also written for
Prospect
on enhancement as well as on the trolley problem itself.

Fifth, to the team at Princeton University Press: Hannah Paul and Al Bertrand were patient and encouraging throughout the writing process—people always express similar sentiments about their editors in the acknowledgment section, but this time it’s really true. Copyeditor Karen Verde, illustrator Dimitri Karetnikov, and press officer Caroline Priday made up an excellent team. Hannah Edmonds, as usual, played the role of proofreading long-stop, brilliantly catching grammatical and spelling infelicities that had slipped through others.

Sixth, thanks to my agents at David Higham, particularly Laura West and Veronique Baxter.

Seventh, my referees’ input was much appreciated. Princeton approached two academics to read the manuscript. I was fortunate in that both of them are moral philosophers of international standing and both chose to waive their anonymity. Roger Crisp, a professor at Oxford, made numerous useful suggestions, as did Jeff McMahan, of Rutgers and Princeton and one of the world’s leading specialists in this area.

Harald Hardrada by John Marsden
True Faith by Sam Lang
Duplicity by Peggy Webb
Escape Magic by Michelle Garren Flye
Murder at Crescent Point by G. S. Dutt
Lexie by Kimberly Dean
Just Another Day at the Office by Lacey Kane
Oedipussy by Deep, Solomon
Let Me Off at the Top!: My Classy Life and Other Musings by Ron Burgundy
Captured In Ink (Art of Love Series) by McDonald, Donna
Our partner